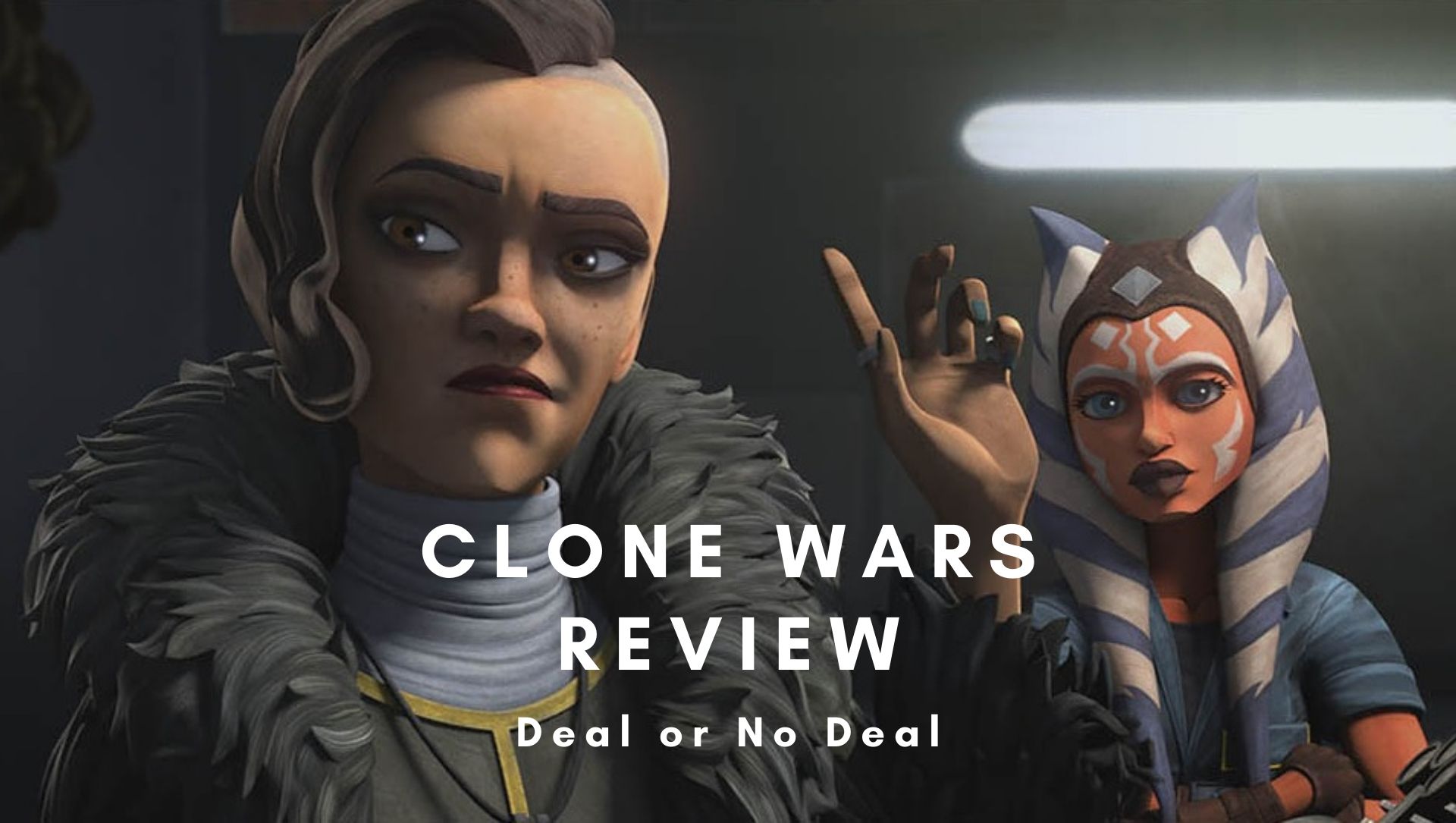 This week, “Deal or No Deal” continued the Ahsoka’s Walkabout arc as Ahsoka leaves on a mission with Trace and Rafa Martez.

The last two episodes really remind me in a lot of ways of Star Wars Rebels and the kind of storytelling they did in that show. Previously, Clone Wars tended to be episodic and experimental by nature. We would have different arcs usually focusing on one part of the war or on a certain story genre. This is a pointless war where we know that the winner is Palpatine in the end. Most of the arcs in the series are self-contained as the real point is the Jedi and Republic are spinning their wheels until Order 66 happens.

But these last two episodes feel like they’re building to something. Without giving away spoilers, the Celebration trailer seems to hint that this arc will overlap into the next one which is all I’ll say. While building the plot, they’re telling these smaller personal stories of the Martez sisters trying to survive as Ahsoka deals with her own feelings about leaving the Jedi. Little emotional stories woven into the bigger context is more Rebels storytelling than Clone Wars. That’s not to say that Clone Wars hasn’t done this before. But to do it so well, being both subtle and bold at the same time, just shows the growth since Clone Wars previously aired. They’re taking what they learned with Rebels and applying it back to Clone Wars.

For comparison, look at the previous arc with the Bad Batch. For the most part, those episode were originally written before Rebels. The Bad Batch arc feels like old Clone Wars picking up where the show left off. However, “Gone with a Trace” and “Deal or No Deal” are new kinds of stories we haven’t seen yet in Clone Wars. Their focus is more on the character development driving the plot instead of plot driving character development. I really love this direction in Clone Wars, because it’s fresh for the series.

Also, Trace and Rafa remind me so much of Ezra Bridger from Rebels during the first season. Their world view is so small, not aware of the bigger problems of the galaxy around them. They only know the problems that affect their daily lives, the things they can see. Like Ezra, they don’t know much about the bigger issues the galaxy is facing. They only want to survive. This small world view leads them into so many problems. Rafa doesn’t realize the Pykes are a crime syndicate. She’s used to dealing with people like Pintu from the last episode, not knowing how in over her head she is. Trace doesn’t know basic pilot stuff like not flying in military lanes. She doesn’t even know she needs a pilot’s license. Trace also reminds me in ways to Tam from Star Wars Resistance too. The Martez sisters’ small world views are what drives the conflict with Ahsoka, who has been fighting in an intergalactic war for the last few years. I can’t wait for the reveal of when the sisters find out she’s a Jedi.

This episode also reminded me of the books Master and Apprentice by Claudia Gray and Queen’s Shadow by E.K. Johnston. Like those books, this episode continues to hammer home how much the Jedi and the Republic are out of touch with what’s happening to normal people. On Kessel, our heroes see slaves working in the spice mines. Rafa blows it off that the Republic would never let that happens. Ahsoka disagrees with her. In the two mentioned books, we’re shown similar situations. Queen’s Shadow tells of Padmé exhausting as many resources she can to try and rescue Shmi Skywalker from slavery. But she can only do so much since the Republic is spread so thin. In Master and Apprentice, Qui-Gon Jinn addresses Yoda about the Czerka Corporation having slaves on the planet Pijal. Yoda orders him to leave it alone, because “indentured servants” has always been part of Pijal’s culture. Jedi can’t disrupt cultures. This does not sit well with Qui-Gon. “Deal or No Deal” helped add more context on these issues set down in previous canon about how and why it was so easy for the Republic and Jedi to fall. It shows why normal everyday people were happy to turn towards the coming Empire. It also helps add to Palpatine’s plan to turn society against the Jedi. It’s a nice synergy episode with other material in the canon.

I think we’re seeing the beginning of Rafa’s manipulation of her sister starting to come back at her. Trace is learning from last week when Ahsoka questions the sisters’ relationship with each other. Rafa clearly wants to protect Trace. But she’s also using Trace too, guilting her with the whole “sisters have to stick together so I can use your stuff in my plans.” We’re seeing Trace push back against Rafa. She gets mad with Ahsoka and Rafa telling her how to fly, what to do with her ship, etc. Her small panic attack before she dumps the spice is so telling. That moment is powerful, because she’s realizing how much Rafa is using her. I hope we get to see Trace standing up to Rafa more and more. You can love someone, especially family, but it’s also important to realize when that person is toxic to you.

I’m also really intrigued by Ahsoka and Rafa’s relationship. Rafa doesn’t trust Ahsoka, threatens her, and questions everything about the ex-Jedi. But Ahsoka has dealt with far worse than Rafa, so it’s easy for Ahsoka to let a lot of that roll off of her. It lets Ahsoka push back on Rafa. And that might help Rafa to like Ahsoka more??? It’s hard to tell. I question this, because it’s so well written. Rafa is such a complex character that’s going to need several viewings once the arc is complete to fully break down. So far from what I can see, I think Rafa likes that Ahsoka questions them and pushes back. I think Rafa wants someone to check her own actions if anything to protect Trace. I don’t think the Martez sisters ever had much structure in their lives. Maybe that’s what they really need from someone like Ahsoka.

-Like I said in my review for “Gone with a Trace,” Rafa reminds me so, so much of Jennifer Lopez in Hustlers. I almost want to say that it’s on purpose, but animation works years in advance. The creators would have designed Rafa before Hustlers ever came out. They both have the same look, mentality, and their stories are so similar. Go watch Hustlers (because it’s an amazing movie), and tell me if I’m wrong!

-This continues to be the gayest piece of Star Wars I’ve ever seen. Trace is into Ahsoka so much oh my god. Check out my piece about the Queer Coding of Ahsoka Tano for more on this.

-I like the ongoing joke that no one likes Trace’s name for her ship. Hey, I like the Silver Angel, thank you very much!

-I love the scene where the Silver Angel takes off for the first time. Rafa is so proud of Trace. We know Trace has worked to put it together piece by piece. The music is powerful. It’s a really great inspirational moment showing the hard work of this young woman.

-I will always have a soft spot for Admiral/Colonel Yularen. He’s one of my favorite minor characters, and Tom Kane does such an amazing job voicing him. I love Yularen in this series, Rebels, the Thrawn novel, and everything else in between. Well, except for A New Hope because he dies, which makes me sad.

-THE SCENE WHERE ANAKIN AND AHSOKA SENSE EACH OTHER! This scene is so perfect! Of course it’s a nod to when Vader senses Luke in the Original Trilogy and lets the ship go. It’s emotional and raw, and it hurts my feelings.

-There’s a lot of great call backs to previous Clone Wars episodes as well as other media. It’s a nice touch to see a Zygerrian in charge of the slaves on Kessel. We know the Zygerrians are slavers from previous Clone Wars arcs. There are so many nods to Solo and Rebels mostly when it comes to the time spent on Kessel. And Marg Krim was also a character in the novel Dark Disciple, and this was his first on screen appearance. Thanks to Star Wars Explained for pointing out that last one. I forgot about that one!

I really love this arc so far. I cannot wait to see what the next episode has in store for us.