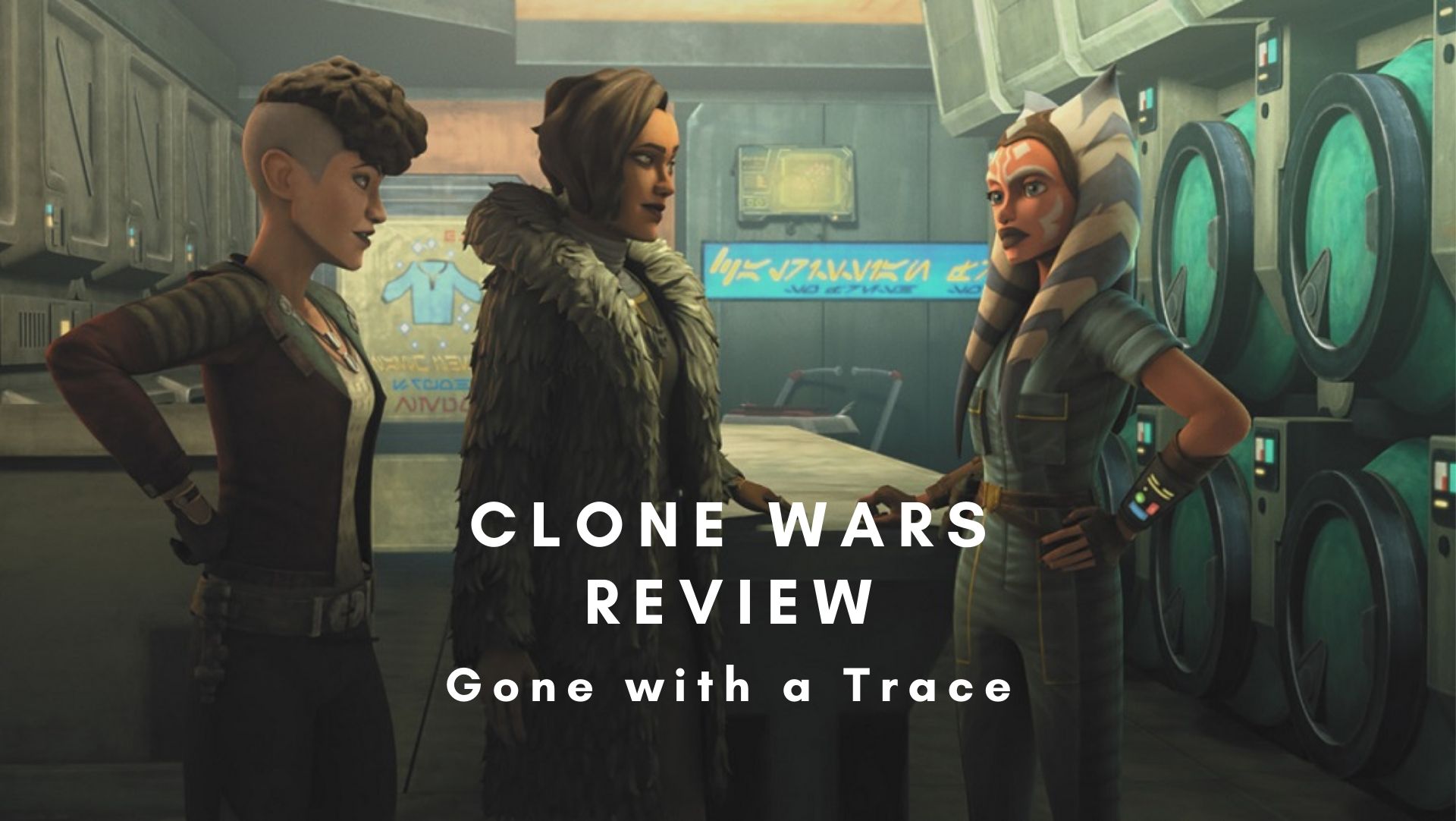 I’m so happy that we’re finally getting into Ahsoka content! “Gone with a Trace” was a lot of set up getting us back into Ahsoka’s story. It introduced two new characters with Trace and Rafa Martez, the wily sister duo fighting to survive. It was a bit slower in pace coming off the high action of The Bad Batch arc. But slower isn’t bad at all as this episode seems to be setting up a lot of personal stories for Ahsoka.

I like the setting of this episode being in the lower levels of Coruscant. I love Coruscant. It’s probably my favorite planet in Star Wars. There’s a plethora of stories to be told, and there’s never a dull location. Pretty quickly, this episode showed the classicism of Star Wars. Trace compares the lower levels to the higher up ones by calling Ahsoka’s old home the place “where the air is clear.” Classism isn’t a new topic in the franchise, because this was a huge part of the first season of Star Wars Resistance. We’ve seen this before in Clone Wars too.

Where it’s different here is we’re seeing a character transition from a higher life to a normal one. Kaz sort of got there in Resistance, but I wish they did more with his learning to check his privilege story. Ahsoka is getting her first taste of the real world. Yes, she’s been fighting in a war and experiencing a huge amount of trauma. But when she’s not on the front lines, the Jedi Temple is a really cushy life. She never had to worry about money. She always knew where her bed and next meal would come from. How to pay for things or where to find food has never been a problem before.

Luckily with Anakin being an unconventional Jedi, she learned some labor skills from him. Ahsoka is okay in that respect compared to other stories we’ve seen. In the Kanan: The Last Padawan comics, we saw young Kanan Jarrus almost starve to death. The Jedi never prepared him to live in the real world. After Order 66 where he was forced to be alone, those lack of skills almost killed him. At least with Ahsoka, Anakin made sure she was somewhat prepared by teaching her basic mechanic work. Though I think if any other Jedi had been Ahsoka’s master, she would be in a far worse position.

That doesn’t mean the transition is easy. Ahsoka tells Trace that she doesn’t understand people. That has to mean normal people. Before this, she was always seen as Jedi Ahsoka. Now she’s just Ahsoka, and she doesn’t know what that means. Her status before gave her a place. Without that, she has no clue how to interact with people her age or how to be a normal person. Ahsoka must find a new normal.

Part of that new normal is coming to understand what the Jedi mean to her and to everyday people. Ahsoka is coming off of leaving the Jedi Order. She understandably has pretty mixed feelings about them. She clearly loves individuals in the Order. She tells Trace that her brother taught her to fight, and we can probably assume she’s talking about Anakin here. Obi-Wan and Ahsoka also had a very close relationship too. But the hypocrisy of the Jedi as a whole is too much for her to accept. How they wanted to shove her trial of falsely being accused for murder under the rug was too great. Ahsoka is working to figure out what she feels about them.

She also gets to hear firsthand what normal people think of the Jedi. Trace says the Jedi don’t care about everyday people. The Jedi Order is out of touch with those around them, who need them the very most. And Ahsoka doesn’t correct her. You can see that she struggles with Trace saying that. Ahsoka could have defended the Jedi, but she doesn’t. Part of her knows that it’s true.

The Martez sisters also challenge Ahsoka in a new way. Ahsoka is used to things being mostly black and white. The Separatist are the bad guys. The Jedi are the good ones. Yes, she did get some insight with people like Padmé who introduced Ahsoka to Separatists who were good people like Mina and Lux Bonteri. Overall though, Ahsoka hasn’t had her moral compass challenged. The Martez sisters do that for her. Trace is not at all a bad person. I don’t think Rafa is either, but she’s prone to making questionable choices. They offer a new and very real world perspective for Ahsoka that most things reside in very grey moral areas. Ahsoka’s like, “Hey, don’t sell these dangerous droids,” and the Martez sisters are like, “If we don’t, then we don’t eat.” They don’t have much of a choice if they want to pay their debts. Ahsoka is seeing the kind of hard choices that people in the real world have to make every day. These will be choices that she will have to learn in time. Ahsoka is learning that her morals and idealisms she learned from the Jedi won’t lead to her survival. She’s going to have to find a new path going forward.

This arc looks to be the stepping stones to who she becomes later in the canon. For example, here she’s openly using her own name. Later in the Ahsoka novel, she uses a pseudonym to hide her identity. The situation is different, as the Ahsoka novel takes place after Order 66. Jedi are hunted at that time. But it’s a clear shift from who she is currently in this arc. These street smart survival skills are what lead her to living through the Empire, into Star Wars Rebels, and beyond it. This is just the beginning of that.

I love the Martez sisters. We get so few sister relationships in Star Wars that they’re a treat to watch. They have such a real dynamic too. Trace seems to be street smart but has a heart of gold. She’s a bit gullible when it comes to trusting her older sister’s words. Rafa is far wilier and cutthroat. Like I said, I don’t think she’s a bad person. But she seems to understand that they can’t play nice all the time when it comes to surviving. As a middle sister in a group of four, I understand what it’s like from both of their perspectives. Growing up, my older sister always seemed so wise. I always listened to her advice and followed her instructions, because she was my older sister. It was a bit of a hard pill to swallow when I was old enough to realize my sisters were not always right. I needed to have my own voice and thoughts which sometimes clashed with their thoughts and views. I think this arc is going to be a bit of that journey for Trace too. She is currently blindly following her sister’s lead. Ahsoka coming into her life is making her question Rafa’s choices probably for the first time. I think she’s going to learn that she needs to be her own person over the course of this arc.

Also, it’s really nice for Ahsoka to find some people her age to be around. Up to this point, all the people her age were tied into the war. Her fellow padawans were generals on the front lines. Steela and Saw Gerrera with Lux Bonteri were fighters at her side. Probably before the war, all she knew were fellow padawans living in that sheltered and cushy life with her. She’s never been around normal teenagers that weren’t on a battlefield. It’s great to see her have a little bit of time to be normal for a change. Even then, that’s a huge struggle for her. It’s not easy to move past being in a war. Ahsoka clearly has some PTSD going on. But the Martez sisters give her a rare opportunity that’s refreshing to see as a viewer. We get to see for the first time what it’s like for Ahsoka to have a moment a normalcy. Knowing what happens in her future canon, this is a rare thing to see.

-I love Ahsoka’s moment where the “Force Theme” plays as she looking up towards the surface. She just had a small quarrel with Trace about how people see the Jedi. Ahsoka, like I said, has those complicated feelings about them. As she gazes up to the surface where she once lived, that is a very Luke Skywalker looking at the twin sunset of Tatooine moment.

-Ahsoka’s scene of taking out Pintu’s men is great! You don’t get many nut shots in Star Wars, and I laughed harder than I probably should admit. Sometimes you just have to laugh at a good nut shot.

-Rafa got that J-Lo from Hustlers vibe and I freaking love it!

-Ahsoka using the Force to save Trace was chilling. For the briefest moment, she thought she lost Trace. It was so reminiscent of the Onderon Arc. That’s almost exactly how she lost Steela, and you can hear that fear in Ahsoka’s voice when she thought it happened again.

-This episode is so, so very queer. I’m working on another article about the queer coding in this episode and what it means that Trace replaced Nyx Okami in this arc who was supposed to be a love interest for Ahsoka. So for the time being, all I will say until I publish that article is I’m very, very curious if they’re setting up Ahsoka to be canonically queer. Check back with Geeky Girl Experience in the coming days for more on that!

EDIT: You can read my full post about Ahsoka’s queer coding here.

I am so happy to be back with Ahsoka. She’s my favorite character in all of Star Wars. She’s the person who made me fall in love with the franchise. I am beyond excited to see where this arc goes next.