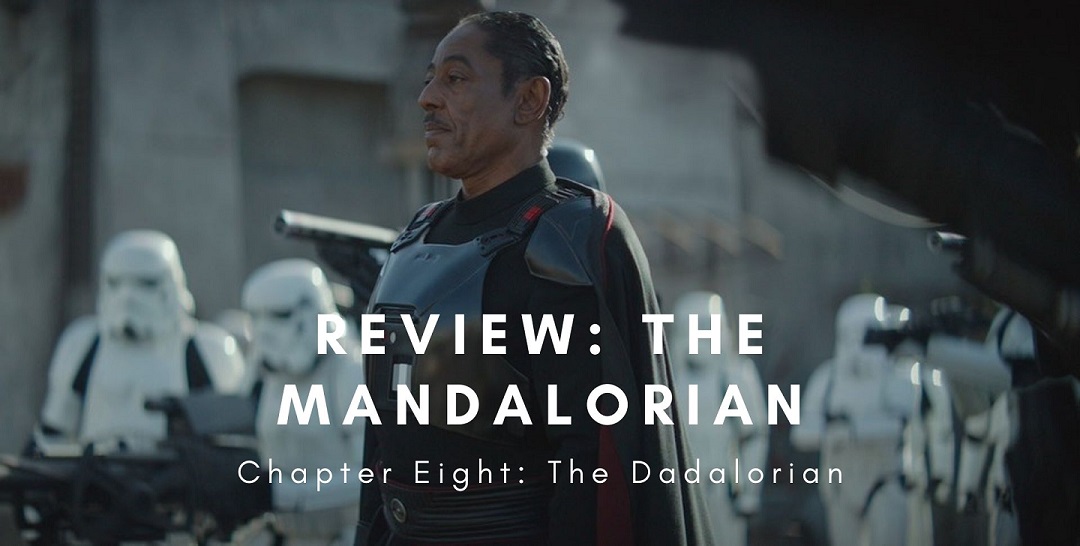 Well, we have reached the end of season one of The Mandalorian and WOW! This show went out with such a bang! I really loved these last two episodes.

I want to talk about the opening scene with the two biker stormtroopers for a moment. I loved this entire scene. As I’ve written about before, snarky and catty Imperials are one of my favorite things in Star Wars. The entire scene is hilarious. I screamed as they kept smacking Baby Yoda. Like the rest of the internet, I was ready to take those two out!

But it’s also an excellent piece of world building and character information about Moff Gideon. It informed us a lot about the state of the fallen Empire. Gideon had to kill local storm troopers and some of his own men when he arrived on Nevarro. It’s because he needs to have a presence of fear even to people on his own side. Before, the Empire was so vast in numbers that that was enough to make people fear him. Since the fall of the Empire though, we can assume his grip of power has waned. I was shocked to hear that he killed stormtroopers including his own men. But it makes sense. He’s coming into a new place, and he must establish that he’s the most powerful person in the room, even to people that are supposed to be on his side. It’s a very desperate move. It said so much about the state of the Imperial remnants. It also says a lot about Gideon as a character. While this scene is played for comedy, there’s so much packed into it. That’s one of the best world and character building scenes I’ve seen in Star Wars in a very long time.

Last week with the release of The Rise of Skywalker and leading into Christmas week, I didn’t get a chance to write about “The Reckoning.” One of the major themes of that episode and the series as a whole has been about overcoming prejudices.

This feels especially important to the fanbase right now with the discourse the last few years, refreshed again with the release of TROS. This feels like a narrative message to us saying not to judge entire groups based on one viewpoint. Get to know the individuals and you’ll see it’s not black and white.

A lot of fans love the Mandos for being badass, amazing warriors. In the show, we see Din struggling a lot. He’s a good fighter, but he’s not some flawless action star. He does not embody Mandalorians as the fandom sees them. But he does hold their spirit of what being a Mandalorian means even with his flaws. It’s showing us that individuals can be different from our overall view of a group and still be the best version once we get to know them.

In story of the show, we get to see Din develop past his prejudices. In the opening moments, we see that he hates droids. Other characters like Cara and Xi’an notes his hatred. We’re given the explanation of why with the Separatists droids killing his parents. But after this long journey of eight episodes, we see Din come full circle. Like when he was a boy in his most desperate hour of need, he looks up at an enemy battle droid. This time, Din puts his full trust in IG-11 to save his life. He puts his prejudices aside and starts to trust this droid to save him, not end him. And at the end, he begged IG-11 not to leave them even though it was the only way to save their lives. It was such a great character arc over the season that I wish we got to see more of Din and IG-11’s relationship.

The Armorer brings up this point too. She says that the Mandalorians were once enemies of the Jedi, but Baby Yoda in particular is not their enemy. It’s just another moment to hammer in the point.

I do wish we got to see some of this resolution with Cara Dune. We find out she’s from Alderaan, so she has a really good reason to hate Imperials. Holding this animosity against Kuill who was only an Imperial through slavery, we didn’t get to see her resolution on this point. We don’t see her have a reaction to Kuill’s sacrifice that helped saved them through IG-11. And I have to wonder if her mindset about some individual Imperials, at least the enslaved ones, changed a little bit.

Some thoughts and tidbits to round out the episode:

-I love that insight that Greef Karga was an Imperial Magistrate. That implies a lot about his past. I have to wonder if he was a propaganda fed Imperial who was hopeful in making change but got jaded over the years OR if he was corrupt from the start and knew how to rig the system to his benefit.

-This episode proves why animation is so important. From referencing the Siege of Mandalore that we will see in February to revealing Moff Gideon has the Darksaber, this show marries animation into live action so beautifully. Even Baby Yoda holding back the flames was like Kanan’s death in Rebels saving the rest of the Ghost crew.

-Moff Gideon reminds me so much of Thrawn by knowing his opponents’ pasts and their real names. I love the reveal that he was an ISB agent especially since the head of the ISB, Colonel Wullf Yularen, was close friends with Thrawn. These three nerds proved how much damage you could do just by being the smartest person in the room.

-I didn’t catch this, but Star Wars Explained pointed it out: The Mandos that saved baby Din were Deathwatch, which has a TON of implications from the Clone Wars. I love it was a group that were antagonists to our Clone Wars heroes were saviors to our protagonist now. Point of view is important, and to Din they are heroes and family. And we do know that not all Deathwatch Mandos were bad. Bo-Katan honestly wanted the best for Mandalore and didn’t think her sister’s rule was best. I love these grey areas of Star Wars which make the universe so incredibly rich with storytelling.

-IG-11 was a superstar this entire episode. From him saving Baby Yoda to storming the town as a one droid wrecking crew to saving Din’s life and finally sacrificing himself, this was his episode to shine.

-I can’t take credit for this. Alex Damon was right when he said in his review that the removal of Din’s helmet was so much like the removal of Vader’s mask in Return of the Jedi. We see that even with all the heroics and fighting, underneath Din is just some guy. It’s an incredibly human moment where Din is at his weakest. And now we get to see Pedro Pascal’s acting, even the little bit of sass and eye rolling we have been assuming he makes under there. Pascal did a great job showing its still Din, mask on or off.

-I thought for sure that the Armorer was done for. What an amazing moment to see her take out all the Imperials with just her tools! She’s such a great character. I want her to be my girlfriend. I love her so much!

-EEEE Everyone petting Baby Yoda on the ears!

-I’m glad that Din made a grave for Kuill. It was a nice respectful moment to honor the character. It also gave the audience a moment to remember him.

-THE FREAKING FRACKING DARKSAAAAABER!!!! THE DARKSABER! THE DARKSABER! What happened to Bo-Katan!? Is she okay!? How did Gideon get it!? Holy crap what will Din do if he finds out about it!? Will he go after it!? OH MY GOD THE DARK-FLIPPING-SABER!!

This episode was so great. I hate that we have to wait an entire year for more. I have been blindsided for this show when I really didn’t have high expectations for it. I knew it would be good. I didn’t realize how flipping stellar it would be. I honestly believe the future of Star Wars is on television. It’s always worked for animation. And now it’s working for live action.