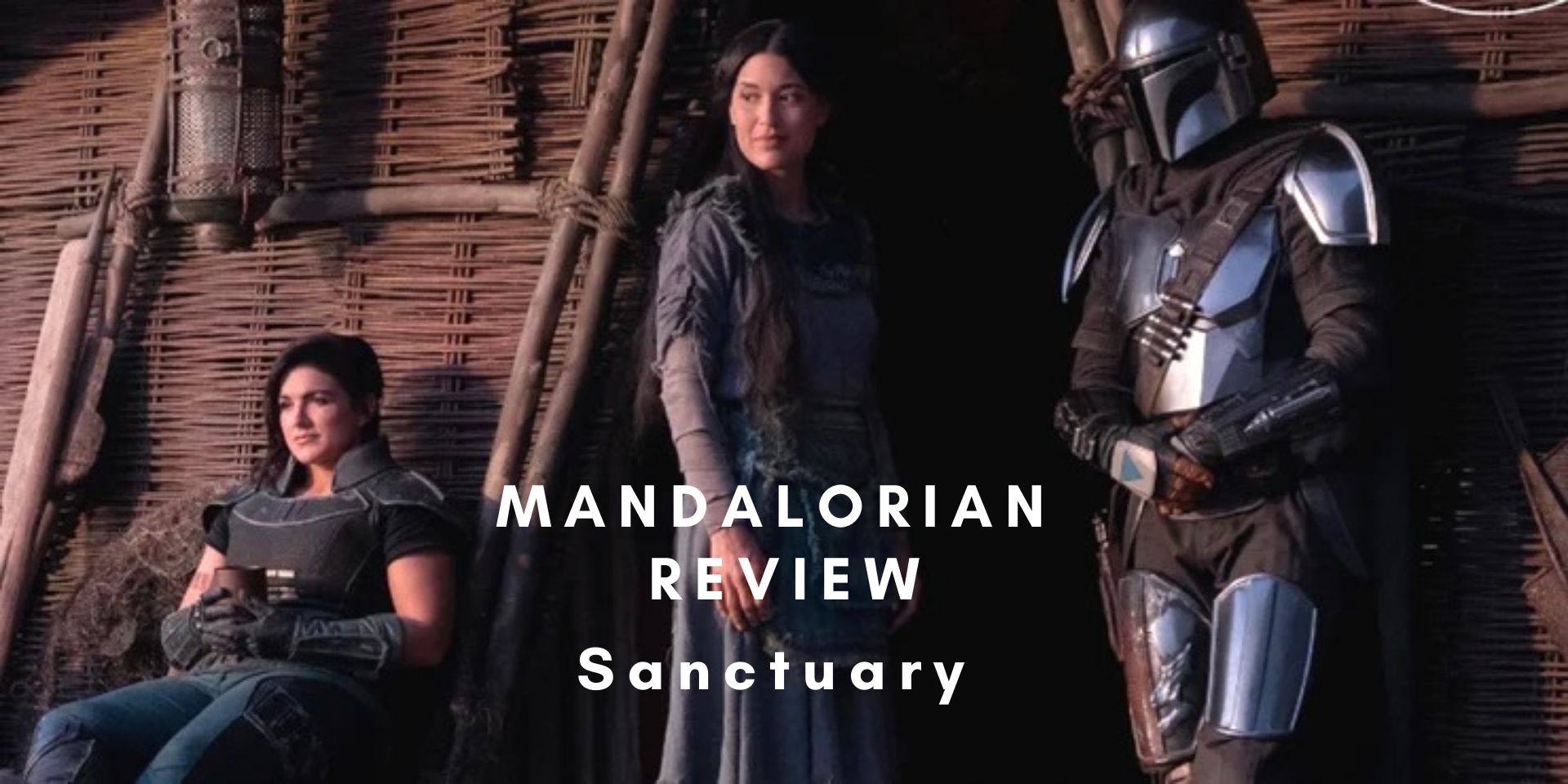 I really liked “Sanctuary.” It was a nice breather, transition episode from the previous story arc to wherever Mando and Baby Yoda goes next. I was happy to see them bond more. AND IT WAS SO ADORABLE HIM CUDDLING LITTLE YODA IN THE BEGINNING AND CALLING HIM A LITTLE WOMP RAT!

I wonder if Mando has mentally named him yet. Or is he avoiding naming the Child so he doesn’t bond too much with Baby Yoda. Or is it like naming Rumpelstiltskin and the baby will vanish to never be seen again.

Anyway, like I was saying I really liked this episode. It was pretty much “Bounty Hunters” from Clone Wars (another tribute to Akira Kurosawa). The plots were almost exactly the same. But I also didn’t mind. It was different enough to be another tribute to it. Also, this would be fresh for anyone who hadn’t seen Clone Wars, so that’s cool.

I have some theories about Omera. I think she’s either had a run in with a Mandalorian, or she is a Mandalorian who has left that way of life. I don’t think she’s from the village originally. There aren’t any real context clues to support this, but it’s just the feeling I get from her. She seems somewhat familiar with Mando and his culture. Omera noticed he didn’t eat in public and doesn’t pry into why. In fact, she seems to know the reason. Her question is about the last time he took off his mask, not why he’s wearing it in the first place. She also knows how to shoot pretty well. She’s obviously had some kind of training. When Cara and Mando say that the villagers have to leave, other people say that they’ve been there for generations. Omera doesn’t say anything similar to the rest of them. She only presses them to help fight. She also knows that taking off his helmet will end his Mandalorian journey, like a sheriff hanging up his hat to retire (kudos to Star Wars Explain for this point). There’s something more going on with her. She knows more than she’s letting on.

Cara Dune is wonderful! I love her design. I can’t remember the exact article, but I remember Skytalkers discussing her costume, hair, and makeup. In an article, Gina Carano said Bryce Dallas Howard wanted to make sure Gina felt feminine in her armor. I love this idea of armor traditionally being masculine also being feminine. Because I really saw it in Gina’s character. She’s obviously a badass, kicking butt, and just physically strong. But there were times when she would turn her head a certain way. You would see the braids in her hair. Her natural look was nice, and her Rebel Alliance tattoo looks like a beauty mark. And I would think, “Wow, she’s really pretty in that shot.” It was an amazing balance of taking something like armor and a heavy hitting character that’s traditionally so masculine and making it looks so beautiful and feminine. I love her.

But I’m also a little on the fence about the show’s format with these side characters so far. I was really excited to finally meet Cara Dune. I quickly fell in love with IG-11 and Kuill. I want more of them. They were all heavily promoted too. But so far, they’ve introduced these fascinating characters and then they’re gone as we continue on the adventures of Mando and Baby Yoda. Yes, the story is about Mando and the Child. They are the main focus as they should be. Though after all the promotional material, I feel a bit led on. I was under the assumption that characters like Cara and IG-11 would be in the show more. Granted, this is the halfway point. I don’t know what the future episodes hold. This could be leading up to Mando’s “Avengers Assemble” moment where he gets to a point where he has to call upon these people again. Maybe they have to come to the aid to rescue Baby Yoda or something. If that happens, then I’m okay with this format. But if it doesn’t, this “meet the new fun character of the week and now they’re gone” is going to get repetitive really fast.

It does feel like Mando is starting the bare bones beginning of a future crew with at least Cara and Kuill. I don’t see Omera leaving her village anytime soon, but I can see that planet becoming their future home base. Maybe not in Omera’s village, but nearby where she could still visit.

My other grievance of the episode was the kids getting grossed out by Baby Yoda eating the frog, and then Baby Yoda spits out the frog looking ashamed. HOW DARE YOU, CHILDREN! DON’T JUDGE OTHER PEOPLE FOR THEIR FOOD CHOICES!

DON’T YOU LISTEN TO THOSE MEAN KIDS, BABY YODA! YOU EAT THOSE FROGS! YOU DO YOU! YOU’RE DOING GREAT SWEETIE!

I want to talk about “This is the Way.” I used subtitles to watch this week’s episode. This was the first time I noticed that they had capitalized “Way.” This isn’t some fan made subtitles where there can be typos and mistranslations. These are official subtitles. If they can spell out all the Star Wars species, names and everything else correctly, this is done on purpose.

I’m starting to think the “Way” could be something similar to the Force. We capitalize the Force when we discuss it, because it’s a proper noun in Star Wars. It’s reminds me a lot of how we capitalize “God” in literature when discussing the being of God. And a lot that we’ve seen of these particular Mandalorians feel almost like a religious sect of some kind. They speak about the Way in a reverent tone, the same way Christians say in church “The Lord be with you. And also with you.” The Beskar is revered like a religious symbol as if it was a crucifixion. The Armorer is held in high respect like she is a priest. Heck, even Mando says that weapons are part of his religion. The word “religion” alone is a very odd choice to hear in Star Wars.

Capitalizing the word “Way” gives it a lot of emphasis. I think it’s supposed to be some kind of proper noun like the Force.

My other long shot speculation which I’m not fully invested in is that The Way was the person who started these new Mando tradition. We’ve seen people in Mando’s life not have proper names. He’s “the Mando.” He’s with “the Child.” The leader of his group is “the Armorer.” Perhaps the Way is the creator of this new Mandalorian way of life.

There’s also something I’ve been mulling on since the show has started. It really revved up in my mind after last week’s episode. The reason I didn’t put it in last week’s feedback was because I was still mulling about it in my brain. Let’s jump on the Speculation Bus and take a ride to Hypothetical Town!

I’m starting to wonder if Mando’s group of Mandalorians were part of the Imperial Super Commandos under Gar Saxon. It would explain a lot of reasons why they hate the Empire and why they’re hiding. We’ve seen precedence in Star Wars that the Empire came to worlds and stripped them of their resources. This happened on Lothal. Jedha was half blown up by the Empire, and we saw in the Star Wars comics that they returned to continue to mine the remnants of the planet for kyber crystals. I could see Gar Saxon letting the Empire in to do the same with Mandalorian which is why so much of their Beskar was taken. Also with the death of Gar Saxon and the soon after decline of the Empire, I could see the Imperial Super Commandos get left to fend for themselves. With no Beskar and the Imperials up and leaving them, they would only have themselves after fighting Sabine and Ezra’s group. They would have a valid reason to hate the Empire. They could be labeled traitors by the rest of Mandalore. Perhaps they were disgraced and cast out by Bo-Katan. I know we tend to want to associate these Mandos with our heroes like Sabine and Ezra, but they’re so vastly different from anything we’ve seen before from Mandalorians. And with them being so borderline religious with “the Way” that it seems like they’re performing some kind of penance. This could be why they refuse to take off their masks unlike the Mandos in Clone Wars and Rebels.

Their predicament seems like it’s a punishment. I just can’t shake the feeling that it’s more complicated than just losing the war. And if they were the Imperial Super Commandos, they’ve lost a lot when they lost the war including status and territory.

The only thing about this is the timeline wouldn’t add up. Mando says this episode he hasn’t taken off his helmet in public since he was a child. The Empire fell in this timeline only five years ago. So to that point, this theory wouldn’t fit.

Lastly, I melted when Omera called Baby Yoda “your boy” to Mando ‘cause Mando’s a daddy now! AND OMERA IS THIRSTY FOR THAT MANDO MAN!

Me too, Omera. Hard same. I would have made out hard with that Mando mask if we’re being real honest here.