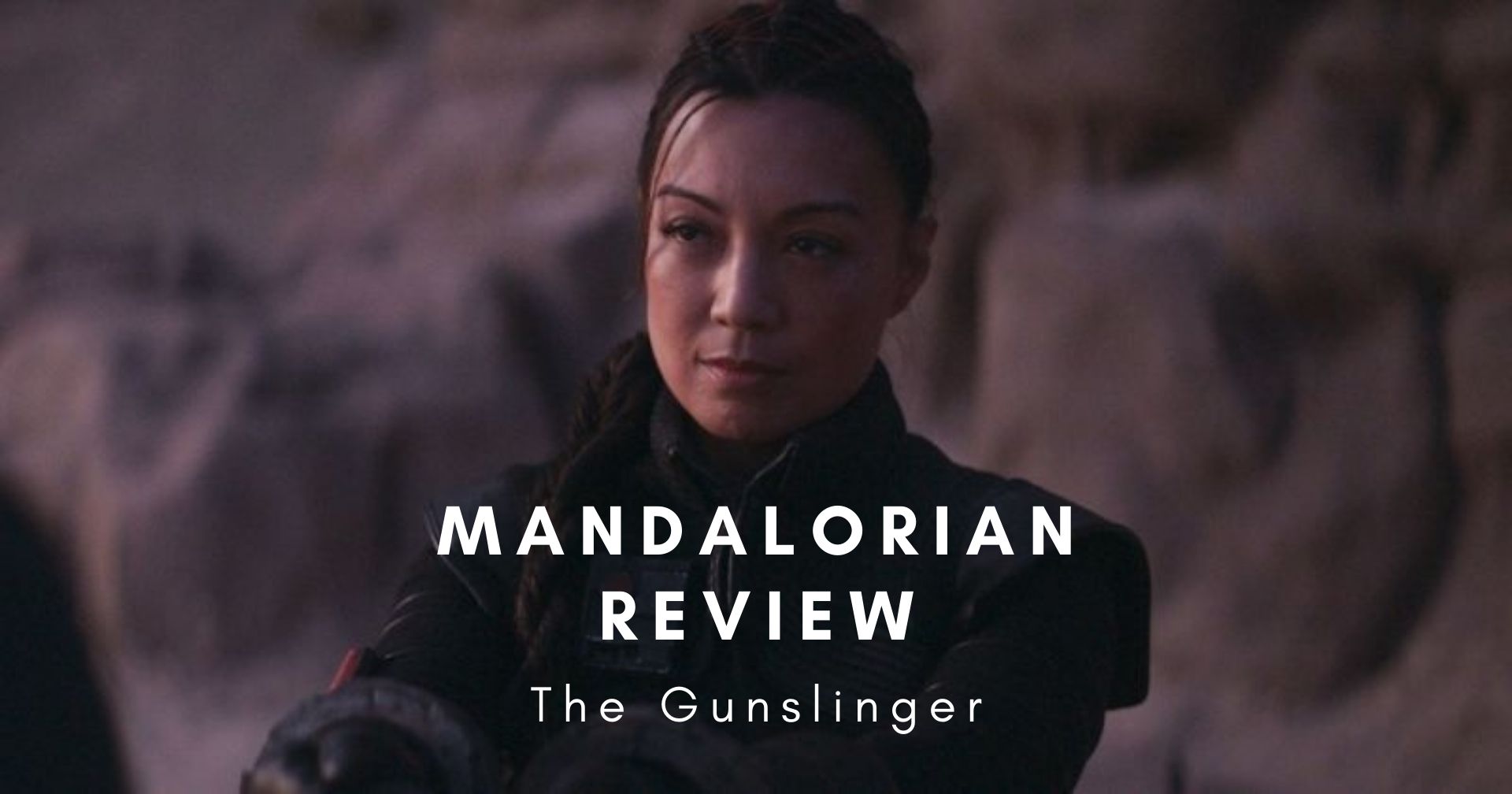 “The Gunslinger” was… an episode. It was probably my least favorite of the show so far. Previously, episode three was my least favorite. Though on the second viewing of that one, I ended up really liking “The Sin” a lot more. It jumped up to probably my second favorite. But on the second watching for “The Gunslinger,” I found I liked it about the same. My view of it didn’t really change that much. It was still just an episode.

To be honest here, it’s comparing milk chocolate to fudge. “The Gunslinger” is milk chocolate. It’s a KitKat. It’s still good, but it’s not like a fancy Ruby Chocolate KitKat from Japan. It’s just a normal.

I still had a bunch of random thoughts here and there throughout the episode.

Holy crap, what happened to Tatooine? It’s a ghost town! In A New Hope, it was the hub for scum and villainy. The cantina was chocked full of all sorts of people. The streets were full of life. And now, it’s a complete 180 where it’s sparse and barren. The Bounty Hunter’s Guild pulled out which makes it look like bounty hunting might have been one of the main industries there. Did Jabba’s death leave a power vacuum? I would have assumed that another Hutt would have taken his place. But it looks like no one has filled that void yet. Both the Republic and the Empire, while not fond of the Hutts, allowed them to have their own chunk of space. In the Extended Universe stories, the Empire allowed the Hutts to thrive, because the Hutts were always on time paying their taxes. We saw the Republic trying to win the Hutts’ power in the Clone Wars to keep them away from the Separatists. But now, Tatooine is nothing. I have to wonder if the New Republic decided to cease all activities with the Hutts and cut them off. Which I wouldn’t blame them since Leia is one of their top leaders during this time, and Jabba did try to enslave her. The Hutts probably hate Leia too after she became the Huttslayer. But I wonder why none of the other Hutts stepped up after Jabba’s death to take over.

I’ve asked time and time again on my podcast where Rotta the Hutt is. Stinky just vanished after two appearances. I would think that him or someone else in the Hutts would take over, but I guess not.

I realized while watching the opening shootout with the other bounty hunter that we’ve yet to hear Baby Yoda fully cry like a wailing toddler. If he full out cried, it would break the internet’s heart. People would riot if he was ever fully sobbing with little tears coming out of those big eyes. My heart couldn’t handle it! But I would also love to see this kid have a huge tantrum. His Force powers would start throwing things, making guns float and fire, and just doing stuff no parent should ever have to deal with. Poor Mando would panic.

My mini theory is that Baby Yoda is having a tantrum and he can’t calm down. This is the moment where Mando takes off his mask so Baby Yoda can see his face for the first time. It’s when Mando really lets his guard down and connects to him as a person.

Peli really grew on me over the course of the episode. At first Peli wasn’t quite jiving with me. I thought she was a bit too out there in her opening scene. As the episode continued, “The Gunslinger” reminded me more and more of so many elements in Star Wars animation. Peli felt like a character that could have been in any of the other Filoniverse shows. I could see her chewing out Anakin for messing with her droids. I could see her telling Kanan and Ezra that their plans were crazy, and Zeb responding with, “Crazy is good.” I could see her mingling with people on the Colossus. As I’m still getting used to a live action Star Wars television format, these characters like Peli who would work so well in animation seem odd at first for me. In my mind, there’s such a separation from the more kid-centric stories of animation verses to the live action Star Wars. But it’s characters like Peli who help bridge those two kinds of stories together.

I also love her parent shaming Mando. Excuse you, ma’am. He is trying.

I also hoped we would get a scene of Peli teaching Baby Yoda how to play Sabacc. I am disappointed it didn’t happen, because it would be adorable. He would try to eat the cards.

Something I’ve noticed more and more about Baby Yoda is his effect on people in the show. It reminds me so much of what Jedi represent. In the Clone Wars, just the sight of a single Jedi could turn the tide of battle. Kanan Jarrus stepping out in the first episode of Rebels and lighting his lightsaber made the wookiees rally behind him. In the sequel trilogy, the search for Luke is important for what he represents as the light the Resistance needs. Jedi bring hope to people in the galaxy. And we’re seeing in the show that Baby Yoda is bringing hope and happiness to the people around him. He might not be a full Jedi. But Peli doesn’t smile in the episode until she sees him for the first time. In his own way, he’s carrying on the light of the Jedi.

And he also makes the internet very happy as well.

I’ve also noticed that Mando seems to have started using the kid to read people. In episode three, the moment the Child was with The Client and Dr. Pershing, Baby Yoda started crying and whining like he knew they were bad. Compared to the rest of the series where Baby Yoda has been comfortable around Kuill, Omera, Cara Dune, and now Peli. We even see Mando’s demeanor change. He is demanding for Peli to give Baby Yoda back until he sees how comfortable the baby is with her. It’s the moment that Mando starts to trusts Peli. I think we’re going to continue to see this development with Mando trusting the baby’s instincts more.

I was surprised they killed off Ming-Na Wen’s character. The announcement for Fennic was such a big deal. The internet was blazing for Ming-Na Wen to join the cast. I was imagining her character getting away and showing up at a later date. Or I could see her forming a temporary deal with Mando so they both got out of there. But nope! They just shot her. And she’s gone.

You know what they say about assuming…

But I also in a weird way like that move. I’m sad they did it, because I really wanted them to get more into her character. I also just love Ming-Na Wen in general as an actor. Shooting her, though, is almost a borderline Game of Thrones move. It completely subverted my expectations once again in this show. We as an audience would expect them to keep a big name actor around. But they set down a precedence that no one is safe and only to expect the unexpected. The Mandalorian is constantly surprising me. It’s something I love about this show.

But there is a bigger conversation that needs to be had. While I love Dave Filoni and he’s one of my personal heroes, he also has a track record for killing off female characters. “Fridging” or “Women in Refridgerators” trope is when a woman is killed off as a plot device to further a man’s storyline or give them “man pain.” We saw this in Clone Wars with Satine and Steela Gererra. Miraj Scintel might have been a villain, but she took a liking to Anakin and died to save him. Kalifa’s death was the rallying point for her two male counterparts to join Ahsoka. Master Tiplar was killed to kick off Tup’s downfall in the Order 66 arc. Asajj Ventress died saving Quinlan Vos. And that’s just for Clone Wars.

I understand that this is a show about war. And certain characters like Anakin and Obi-Wan can’t die because it’s set before Episode III. But with The Mandalorian and with a character like Fennic who doesn’t have ties to any other parts of Star Wars, they made the choice to kill her off when they didn’t have to. They killed her off to further Toro and Mando’s stories.

The podcast Lousy Beautiful Town did a really good breakdown and discussion about Fennic’s fridging and how it has a negative impact. I suggest giving it a listen.

Who was Fennic supposed to be meeting? She states she has a rendezvous to get to. My guess it was either Giancarlo Esposito’s character or Greef Karga. Both of them wear capes, so I also bet it was the person who we got a sneak peek at the end also wearing a cape. I’m leaning more towards Esposito’s character.

Oh Toro Calican. You get the evil gold star for trying.

Toro was the other character that I felt like could fit right at home in animation. Actually, he reminded me so much of both Ezra and Kaz in different ways. Toro’s dialogue and mannerisms reminded me so much of season one Ezra when he was trying to play off being the big shot street rat who quickly got in over his head with the Rebels. But then his actions were very Kaz like, especially early season one Kaz. When Mando gave away his binocs, it reminded me of Kaz with his trophy in “The Triple Dark” and how that item had value to him. Both learned that material items weren’t the most important thing. Also Toro’s scene where he thought Mando was asleep, and Toro was flipping around his blaster was a very Kaz things to do. In fact, we’ve seen Kaz spin around a blaster and act silly. It was nice to see these nods to other characters in animation brought to live action.

Only Toro took a much darker path than either Kaz or Ezra. Maul would have loved this Toro kid.

I love that Mando’s armor is getting messier and more personality. I hope he keeps the blaster mark on it. It’s like Echo in Clone Wars. In the episode “Rookies,” Rex put the eel blood hand print on Echo’s chest plate. It became his signature mark for the rest of the show. I hope we get to see this shiny armor get more and more personality as it becomes more lived in.

Biggest gripe of the episode: I don’t need to see realistically dark nighttime scenes. Stop making it so dark that I can’t see action, emotion, or plot. I hate this recent development in media. I don’t want it to be dark. I want to watch the show. I’m paying for this. Let me see what’s going on. Would it be so hard for there to be a moon to light up the setting more?

For an episode I thought was just alright, I apparently had a lot of thoughts on it!