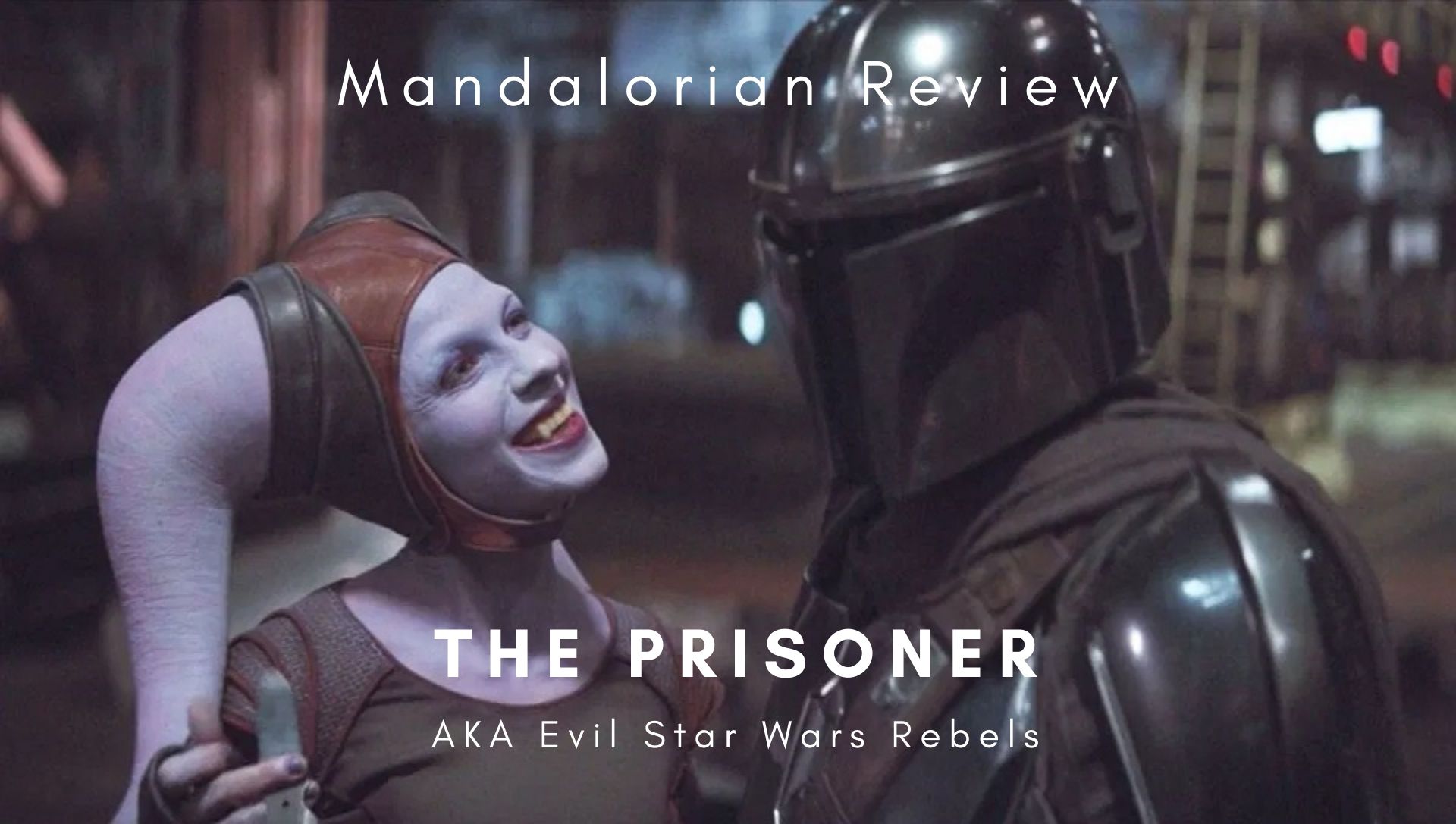 I really like “The Prisoner.” It reminds me so much of Star Wars Rebels if the Ghost crew was a bunch of evil jerks. You had a Twi’lek woman, a murder droid, a big muscle guy, and a human leader who had plans fall apart. And Mando is the Ezra character coming into all of this. Even Mando taking this job and everyone going, “Don’t ask questions” was very season one Rebels where Hera and Kanan would keep bigger things from the kids. And the Ghost crew had a few episodes where they snuck into prisons to break people out. It gave me such evil Rebels vibes, and I enjoyed it so much.

What I loved about this episode is how it was a glimpse of who Mando used to be and who he is now. He apparently used to run with these guys, and it’s hinted that he was probably a lot more like them. Being an orphan kid in a Mandalorian like religious cult thing, perhaps this was his rebellious teenage years. But what we see through the episode is how different he is to the mercenaries. He’s grown past that. He has an honor system. He has a kid now to care for. And he’s not like these people anymore. Qin assumes that he killed the rest of the crew. We see that Mando just imprisoned them, because he’s not a killer like the other mercs. It was a great way to put his past and present together in the same room and explore it.

What was Xi’an and Mando’s relationship before? It’s implied that it was possibly romantic but more likely physical. But if he doesn’t take off his helmet, that could make for a pretty awkward date. They couldn’t share a milkshake together. She couldn’t give him a kiss at the end of the movie. No one wants to see their own reflection during bow-chika-wow-wow time, but she would see herself since he wouldn’t take his helmet off. It’ll be awkward.

But in all seriousness, I am wondering about the backstory here. He obviously got her brother locked up which crossed her. On a more personal level, she knows a lot about Mando like his helmet rules and that he hates droids. Or on a simpler level, it could be another story device showing us how he’s changed. They’re showing us someone he was with when he was younger comparing it to who he is now. We saw a more mature side of a romantic interest with Omera vs what we’re being told what Mando and Xi’an used to be. It’s like seeing your teenage fling vs who you marry as an adult, and how you have changed since then.

I actually really loved the character Mayfield a lot. He’s everything I love about really catty Imperials. He’s full of himself. He’s boasting his own abilities. He’s really good at one thing. But the moment things are out of his control, he loses all that confidence. He’s clearly the new guy, because Qin doesn’t know who he is. Mayfield is trying so hard to be a badass, and when he starts to fail, he fails soooo quickly. He starts huffing and mouthing off. He even says a few times to Xi’an that he has things under control, and she laughs at him. He reminds me so much of Director Krennic, Admiral Konstantine, and so many other Imperials before him.

I love me some catty Imperials, and I absolutely can tell he was once one. Love it!

I’m really glad they brought in the New Republic. I was wondering how they would incorporate it, the remnants of the Empire, and the shift to the First Order in the show. This is canon that hasn’t really been developed on screen in Star Wars, so I am excited to see how they bring these three factions into the show more. Sure, the New Republic didn’t do much, but it was cool to see them included.

So all the Mandalorians are dead? I really don’t know what to make of this line. Before, I was thinking that Mando’s group was more of a religious like sect. But we’ve had a lot of talk of their world being destroyed and now their people are dead. I’m wondering if they got caught up in Operation: Cinder, which was Palpatine’s contingency plan in the event of his death. Multiple worlds had been targeted for destruction as a result. The Rebellion was able to save many of them like Naboo. But I wonder if they were unable to save Mandalore. Maybe this is the new way of Mandalore to grow and survive after they did, in fact, suffer a massive blow.

I will say that I’m not a big fan of how they handled Burg and Xi’an. Before we had more people of color in Star Wars, aliens were very much coded to be the non-white characters of the universe. We’ve had a lot of great strides with more prominent alien characters being center of the stories especially in animated shows. We’ve had Hera in Rebels, Neeku in Star Wars Resistance, and Ahsoka in Clone Wars. There’s a huge list of them, and I love seeing alien characters playing more and more roles in the universe. Resistance, to me, is what Star Wars should always look like with a perfect mix of humans to aliens on the Colossus. I’ve loved seeing them make huge strides with these characters.

Which in turn made me disappointed to see Burg and Xi’an being more animalistic. Perhaps I’ve been spoiled by Vizago and Hera, but I felt like Burg and Xi’an were a step backwards. I can’t even really put my finger on exactly what it was about them that felt really off. Maybe all of Xi’an’s hissing? Maybe it was Burg grunting and using simple sentences vs Vizago who was quite eloquent? There were a lot of little things taking me back with them.

But there are different types of people in all cultures. Perhaps we’re seeing a different side of people in their species, and it’s not the side I’m used to. My expectations of what I think Twi’leks should be vs not matching what’s in the show doesn’t make Xi’an bad. I just think she and Burg could have been executed not as animal like. It made them read more that aliens are more like animals than equal beings of the human characters.

A few random thoughts to round out the episode:

-Mando didn’t know they were going to use the Razor Crest in the mission. Was he planning on just leaving Baby Yoda at the mercenary hub on the ship while he was off on a mission? This guy needs to find a daycare.

-I loved seeing Mando in the entire end scene just kicking butt and taking names. He was like Batman! While I was afraid that this entire show was going to be just action and explosions, it’s subverted my expectations enough where huge fight set pieces are a delicacy and so much fun to watch.

-I WAS SO SCARED FOR BABY YODA BEING HUNTED BY EVIL AP-5! I know it’s not AP-5 from Rebels, but he was like the evil version of him. I also loved the moment where the Child was about to use the Force on the droid, the droid gets shot, and Baby Yoda looks at his hands like, “WHOA! Did I do that!?”

I really loved this episode. There’s so many little nuggets wrapped up in the middle of a prison break episode. The only other thing is I’m ready for all the plots to come together. We have two episodes left, and I feel like they’re going to be CRAZY!