Star Wars Resistance released their new episode this past weekend called “The High Tower.” It’s my favorite episode of the series so far. I mentioned in my Resistance review that once the show got the spy story going, the plot would really surge with it. It didn’t disappoint me!

But I do have a couple things to point out about the episode. One is a gripe and the other is a theory.

Kaz needs to say he’s sorry to his team 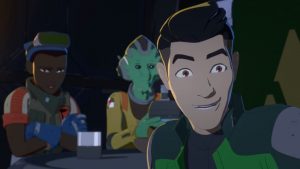 I like Kaz a lot, but that doesn’t mean I can’t be critical of him. I talked in my review about how he comes from a place of privilege is an interesting side of the character we haven’t quite seen in Star Wars. He actually reminds me a lot of Lux Bonteri from Clone Wars. They’re similar character types with only the major difference being Lux grew up in wartime while Kaz was raised in peace.

But there’s something I’ve noticed about Kaz the last few episodes that really grinds me the wrong way. We’ve seen Kaz disregard Tam’s feelings about Hype and ignore her suggestions for his spy mission. Last week, he tricked Neeku to escape his work. In “the High Tower,” he gets mad at Neeku for speaking to the First Order. While Kaz acted out of a place of fear, Neeku believed he was helping his friend. His team even warned him about Rucklin which he disregarded. It almost cost him both his and Rucklin’s lives. For a few weeks now, Kaz has been treating his team pretty crappy.

And he hasn’t apologized to either Tam or Neeku for his behavior. They seem to roll with it by letting him off the hook, but I think this is due to it being a 22 minute show and not having time to address the issue. This could be because he is a senator’s son. He might not have had to apologize for his mistakes before.

Yeager said last week that Kaz has a good heart. I believe this too. But at this point in the show, he needs to start addressing his own shortcomings and how he’s inflicting his flaws on his team.

And the First Order spy is… 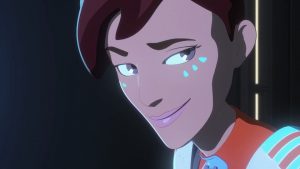 We’ve been given many possible spies five episodes in. They’ve blatantly said that Captain Doza openly works with the First Order. Griff Halloran may or may not be an ex-Imperial who could side with them. We saw that he didn’t aid the other Ace Pilots in protecting the station against pirates funded by the First Order.

And I think this is all a bunch of red herrings. I think the spy is going to be a person we least expect.

Which brings me to Torra.

Torra is an incredibly nice person. We see that she’s kind, she welcomes Kaz, and she encourages him as a racer even when he’s her competition. This, to me, could be her downfall.

In “The High Tower,” Captain Doza meets with Major Vonreg who points out that Doza has a past with the criminal underworld. Also, it’s a normal occurrence to have the First Order at the station. While every day people aren’t aware of the evil bad guys, people on the station are in the Outer Rim closer to their activity. They’re a constant in these people’s lives.

The station seems to have difficulty with fuel supplies and pirates. I get the feeling that Captain Doza isn’t a bad person, but a person who has made bad business decisions that’s landing him on hard times. Torra might be aware of his troubles. I don’t think she’s the First Order spy for evil reasons, but as a means to helps her father. She might not realize what they truly are just yet. She could see them as a means to aid everyone she cares for and supporting her home.

This is my theory and I’m sticking to it.

What did you think of “The High Tower” or Star Wars Resistance so far? Leave me a comment below!

Like what I do? Maybe consider buying me a coffee sometime?