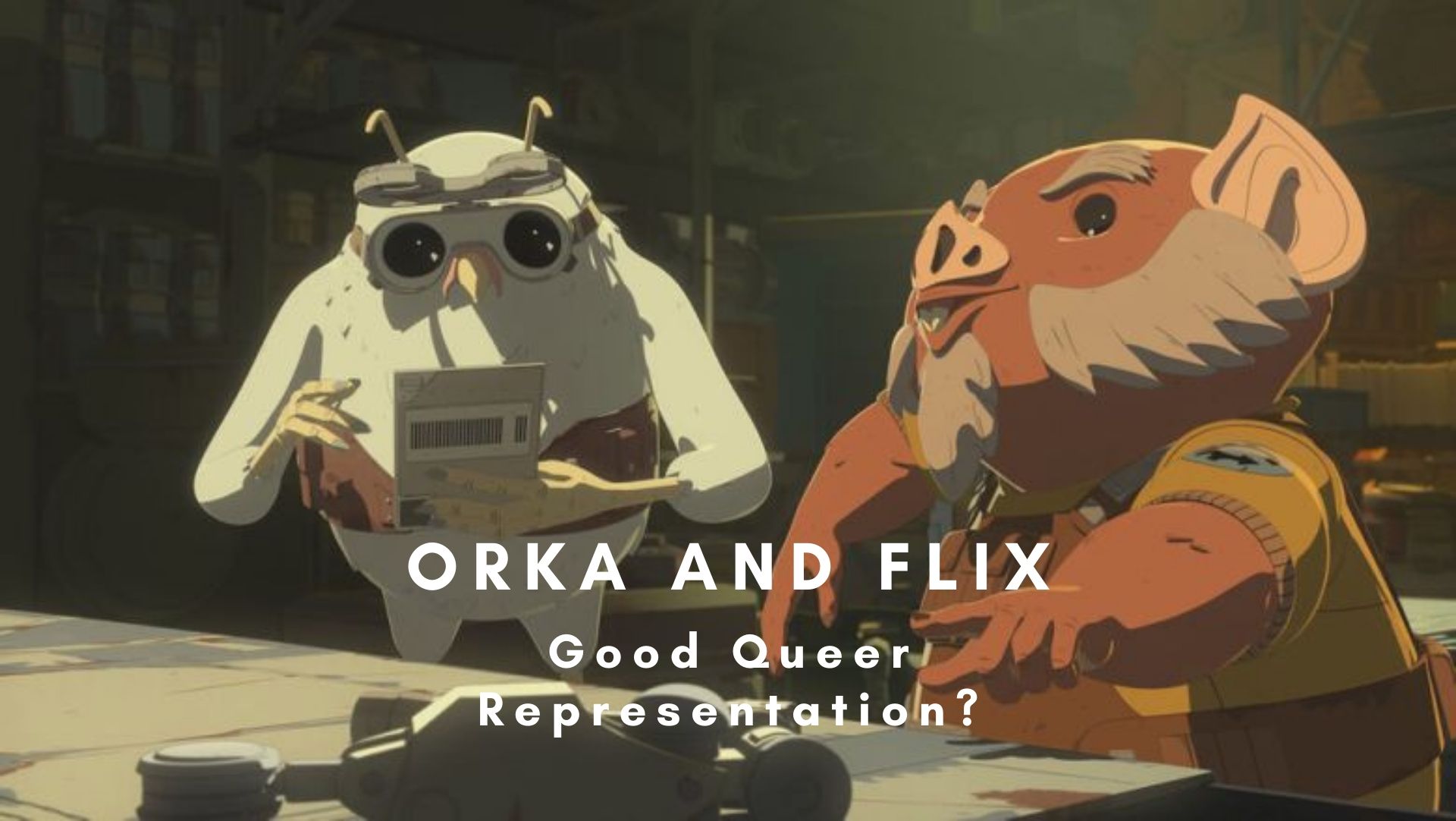 Star Wars Resistance became a historic show when it was announced that Orka and Flix were the first on screen queer couple in Star Wars. Sure, there’s been plenty of queer people in the books and comics. But this was the first time we got to see two people of the same sex love each other on a television show or movie in the Star Wars franchise.

This is a huge deal and a big step forward in representation of Star Wars. The fact that Orka and Flix were prominent characters too allowed us to see them constantly in the world of the show. They were part of the Colossus. Everyone knew who they were. They were a staple of the show. And no one in show had an issue with them being together.

But when it comes to how they were portrayed as queer characters on the show, I found myself disappointed with the execution.

I keep thinking back to a quote from Jon Lovett on his podcast Lovett or Leave It from the December 7th 2019 episode “Darin’ to Say ‘Barron.’” His final rant of the episode was discussing the “big” LGBTQA+ moment of The Rise of Skywalker. I quoted “big” because it’s not. It’s box checking, which I’ll get to later in this article. Jon Lovett said, “If this gay representation is some tiny little moment, just remember that they don’t get any pats on the back. Star Wars [and] Disney will have a gay hero in a movie the moment it’s no longer brave to do it.”

I wrote a post back in November after the episode “From Beneath” was released. It detailed what Orka and Flix meant to me as a queer woman, finally seeing myself in the Star Wars universe. I wrote, “I feel like Star Wars finally cares about queer people like me. For the first time, I feel like I actually matter to the writers, cast, and crew.” Animation has always been the stepping stones for the main stories, testing the waters for the movies and franchises. I had said, “I feel like queer representation is like that too. They’re testing the waters with Orka and Flix now, and hopefully one day we’ll get it on the big screen for all to see.”

But I had also said that queer representation with Orka and Flix needed to be better, clearer, and more obvious. I had hoped that at some point in the rest of the season we would get a clear and obvious moment with them to hush naysayers. After “From Beneath,” it never happened.

Looking back on two seasons of Resistance, I’m torn on whether or not the creators should get that Jon Lovett pat on the back or not. On one hand, they gave us two queer characters in an animated show. The characters had an episode dedicated to them. Flix especially was very queercoded from the first episode. On the other hand, it’s not clear at all that Orka and Flix are together. Orka states that he “loves the guy,” but it could be understood as a friend love or business partner love. Flix’s family say they see why Flix likes Orka, but again, it could be misunderstood.

It’s all disappointing, because I’m not sure why they’re holding back on this. My first instinct is to question if Disney made the creators censor Orka and Flix. It’s been pretty well documented that Gravity Falls creator constantly pushed back against Disney when the Big Mouse wouldn’t let him put gay couples into his show until the final episode. I would hope a few years after Gravity Falls wrapped up Disney had progressed since then. Especially since we have shows like Andi Mack featuring the first queer teen romance on their channel. Which would mean it’s the creators that were possibly the ones to blame for the shortcomings of queer storytelling. Whether it’s the creators or the Big Mouse to blame, they need to do better with their queer representation.

Show us on screen. Don’t just tell us.

Queer people are not boxes for you to check off in your stories to make you feel like you’ve accomplished something. Box checking is so infuriating. Examples of box checking is the “big” gay kiss in The Rise of Skywalker or the gay character in Avengers: Endgame. They’re blink and you miss them characters. They’re there just for the creators to say that they did their part and are so woke or whatever for queer fans.

Now, Resistance did far better than TROS or Endgame did. Orka and Flix have backgrounds, families, and even a pet together. They have their own lives and history within the story that’s affected by the story. They also play a role in helping the Colossus and fighting for the end. The thing is, though, is they could have all of these parts as straight characters too. The creators need to take it another step.

Define what they are together. We don’t know what their status is together. Are they dating? Are they married? Context clues from the show gives us hints that Orka and Flix have been together for some time now. What we don’t know is how much.

Second, show us as the audience.

Orka and Flix are never physical with each other. I don’t mean having them make out or anything. Little things could make it read queer. At the end of “From Beneath,” let them hug. They were both separated from their partner and almost die. Let them embrace once they know the other is okay. Or in background shots, let them hold hands if they’re scared or worry. Let them be an actual couple.

Third, the other characters need to voice it.

It’s clear that everyone on the Colossus doesn’t mind that Orka and Flix are a couple. But the other citizens need to voice it too. Maybe have Aunt Z tell Orka, “I’m cutting your husband off from drinks.” Some kind of dialogue to help define that they have a place in the world, this world doesn’t judge them, and they’re accepted.

These three simple things would make a world of difference with these characters. There can’t be any excuses anymore that queer characters can’t be this open in an animated show. Not when other shows like Legend of Korra, She-Ra Princesses of Power, Steven Universe, My Little Pony, and Gravity Falls (which really tried) are blowing them out of the water. Star Wars Resistance took a baby step in the right direction, but it wasn’t enough. They needed to do more. Star Wars, as a whole, needs to do better.

Queer people will not let you get away with checking boxes anymore. We expect more from Star Wars as a franchise.

No more excuses. Just do it.