Where Pixar’s ‘Onward’ Messed Up By A Person With Stepparents 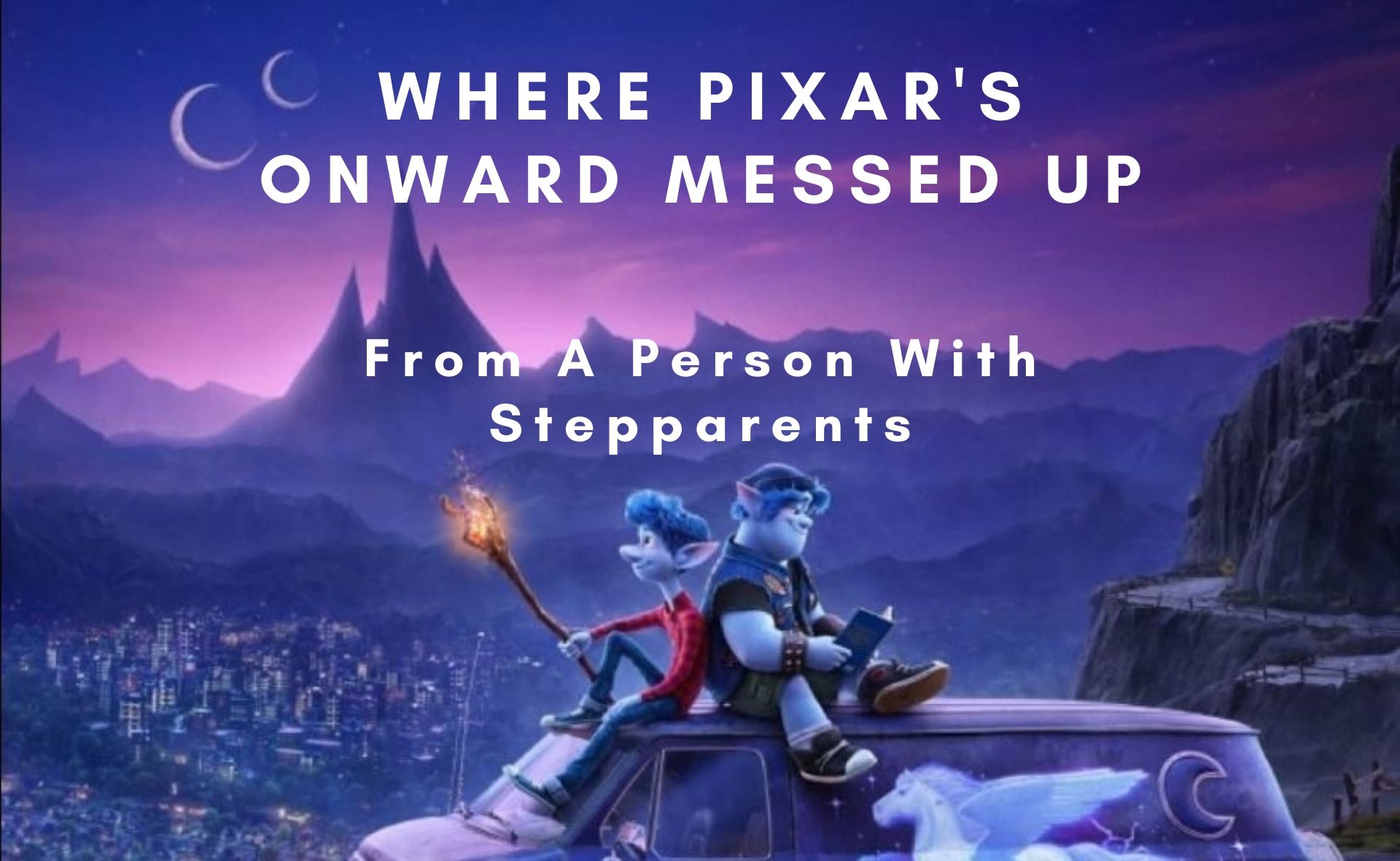 I want to say first that Onward is an amazing movie. I really loved it for the most part. I got so emotional seeing the brothers’ journey together, because I saw a lot of myself in them. I saw a lot of my own relationships with my siblings too.

But there was one glaring part of the movie that I wish was different, a moment where the film failed to stick the landing. This is going to get a bit rambling, but this movie sort of pissed me off on one important point.

I wish that Barley and Ian actually had relationship with their mom’s boyfriend, Colt. That, to me, was a huge missed opportunity. I was expecting Colt to have a big moment at the end where he helped Barley and Ian in their quest to meet their dad. One where he’s not trying to replace their father, but help them on their journey as a support system. Instead, he was sidelined for a lot of the movie and played for laughs. He was played as an antagonist, which pissed me off so much as the credits rolled.

This was an important landing point for me, because I have a blended family. I might not have lost a parent, but my parents have gone through a divorce. Up until the end of Onward, I really sympathized with how the boys viewed their mom’s boyfriend. I’ve been in those shoes before.

After my parent’s divorce, it was difficult seeing my mom and dad with other people and not with each other. I had to deal with my own pain in knowing they wouldn’t be together again. At times, I was selfish, and I admit that I didn’t treat the new people in my life with kindness. I took my own pain out on them. I even refused to have a relationship with my mom’s first real boyfriend. I wasn’t ready for it, and I shut him out. Then, he died suddenly. It was traumatic, because I never gave him a chance. All he ever wanted was to make Mom happy. I realized my mistake and the opportunity I missed.

From there, I opened myself to people my parents were seeing. I realized it wasn’t only about my happiness. I wanted my parents to find happiness too. That to me was far more important. It is always a difficult transition to live through whether it’s divorce or death of the parent. As a child, you’re never going to be ready to move on from that.

But when my stepmom and my stepdad came into my parents’ lives, I realized I had gained so much more. Sure, my old life would never be the same. But through my stepparents, I gained such a big family. My stepmom’s niece, nephew, her brother and his wife are now part of my world. My stepdad had kids of his own, and I have brothers for the first time in my life. Topher and my brothers-in-law Jordy and Ismail have my back no matter what. I’m still getting to know Adam, my sister Kristina’s husband, but that’s coming along with its own time. And my wonderful sisters I gained. I grew up with Jen, who was my protector. I gained Brandy, Gina, and Kristina too. Brandy and Jordy took me in when we lost my childhood house to foreclosure. They kept me from homelessness. They taught me that a house is a building, but a home is the people in your life. Gina and Ismail make a point to always send me pictures of the kids. Because Lord knows I also gained SO MANY nieces and nephews too. I went from two kids to having twelve nieces and nephews to bless me as a very happy aunt. And last month, we came together as a family once more to mourn the loss of my nephew Edward when he suddenly passed away. Our love and strength as a family grew as those bonds were tested.

And my stepparents… what can I even begin to say? Lynn and Dan are both rocks in my life. Lynn tells me all the time how happy she is to have me, because she never had kids of her own. She gets to have Christmas with a child in her life now. We share interests and so many jokes together. Dan challenges me but its to make me grow as a person. We don’t always agree, but I know it’s from a place of care. He’s told me he never wants to replace my dad, but that he will always support me as his own. And Lynn has told me this too. They are so important to me. And I am proud to have two stepparents I love. I know they have my back just as much as my dad and mom.

THIS! This is where Onward missed the mark. Blended families are amazing! They missed Barley and Ian finding the beginning of a new journey with Colt. Colt didn’t have to ever replace their dad. For Barley, he could never be that role, because Barley remembered his father. But for Ian, he could be that step father figure to help him start a new beginning. I wanted Colt to come into the final battle. I wanted him to fight beside Barley and Ian! I wanted Colt to understand and know that it was important for the boys to have this moment with their dad! I wanted Colt to fight for the boys as his possibly future children! And after all this happened, Colt could help them move forward again. He could comfort the boys and help them in their next step in their lives. Not to be a replacement but to be a support system.

Because that is what stepparents are for me. That is what MY family is to me. I have two loving parents, two amazing stepparents, four sisters and four brothers who love me, eleven nieces and nephews who I am so proud of, and one nephew who I will always miss, who I will always mourn of a life that was cut short far too soon and dream of what could have been. I gained so much love! I gained far more than I ever lost in my parents’ divorce.

And the love I gained from them is the most magical thing in the world to me. It’s a complete shame that Onward missed that. It didn’t have to end in some big wedding between Colt and their mom. It just needed to end with a chance of a new beginning for Colt, Ian, and Barley.