“Dangerous Debt” is an episode where I could see a lot of fans being split on. If this wasn’t the final season of Clone Wars and it came earlier in the show, I think people would say it’s great. But I’ve seen some push back with this one. I felt the same way. As I said last week, I like that they are doing Star Wars Rebels kind of episodes in Clone Wars with character driven stories. I still feel that way. I like “Dangerous Debt” a lot, but I found myself a little let down by it.

The more I thought about what it was that didn’t sit well with me, I realized it’s my expectations of this final season. This is it for Clone Wars. This is going to be the end of the show. Fans have waited for years for this. It’s easy to expect everything to be at the level of the Siege of Mandalore which we know is the finale. So when we get a much quieter character driven story, it can feel like a letdown. I realized that I shouldn’t hold my expectations against the story the creators are telling. Expectations are a double edge sword. They can make us excited and hype us up. They can fuel our wild speculations and head canons of what’s to come. But on the downside when a show doesn’t meet our expectations, it can leave a negative view of the episode.

So when I went back and rewatched the episode for this review, I checked my expectations as I booted up Disney+. I found that I enjoyed the episode a lot more the second time through.

There’s still some narrative beats that I think could have been written better. The tension of this arc is Ahsoka hiding the fact that she’s a Jedi from Trace and Rafa. As a viewer, that’s the story reveal I’m waiting on. The more and more we find out why the Martez sisters hate the Jedi, the more that story pressure cooker gets turned up a little more. It’s going to explode, and it’s coming. Three episodes in, I think this beat has gone on a bit too long. I feel like it should have been the cliffhanger reveal of this episode. My fear for next episode is that this reveal will come towards the end of the arc. We’re not going to have time for Trace and Rafa to process that Ahsoka is an ex-Jedi. I’m afraid it’s going to be some quick, “Oh! I guess we’re cool with the Jedi now” kind of thing, which would be a huge disservice to the story they’ve told up to this point.

Also, this plot is starting to get a bit stale. We’ve had three episodes of Ahsoka hiding her Force abilities and making up excuse after excuse about how she keeps doing amazing things. For the first two episodes, it was fine. But as I was watching the third episode, I found myself getting bored with it.

They’ve done such an amazing job telling the story of the Martez sister and their forming relationship with Ahsoka who has been lying to them. I just want a satisfying and well written ending next week.

I do like that we got background on why the Martez sisters are so naïve when it comes to dealing with the underworld. I mentioned in my review last week that they had an incredibly small world view, not understanding how in over their heads they are. Now, we find out they haven’t been lifelong scum and villainy types. They’ve only lived on the streets for a couple years. To be more specific, since the episode “Hostage Crisis” back in season one. We know the Clone Wars is 2-3 years long in the timeline. “Hostage Crisis” is episode 51 chronologically in the series. So they’ve lived the hard life for maybe two years at the most. And it’s clear they’re still mourning their parents. I liked finding out this information, because it added a lot to the arc. That context makes it easier to forgive their previous stupid mistakes. They’re learning lessons on the fly. The problem is their first big job might actually get them killed. 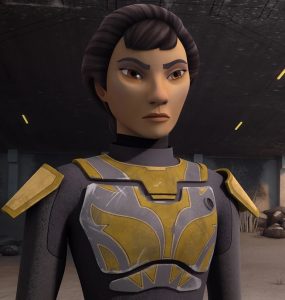 I got to talk about the Mandos in the room. I screamed hearing Bo-Katan’s voice. I had speculated last week about this arc and Siege of Mandalore overlapping. But the surprise that made me pause the episode, get up, pace the room in excitement, and freak out my cat was hearing freaking Ursa Wren’s voice. Ursa is a Star Wars Rebels character who is the mother of Sabine Wren, one of the main characters of the series. My co-podcaster and I just said this week in our podcast episode for “Legacy of Mandalore” how cool it would be if Ursa showed up in Clone Wars. I’m never right when it comes to theories, so that moment made me self high five myself.

I also love seeing them connect Clone Wars to Rebels by adding back those future characters into the new season. Last Dragon Con on the Star Wars animation panel, I mentioned that was the one thing I wanted to see this season. Seeing Ursa and knowing we will at least get a glimpse of young Kanan Jarrus makes me so incredibly happy.

I also love imagining that somewhere out there is toddler Sabine Wren waiting for her mom to come home.

-As Rafa described the Jedi that came to see her and her sister after their parents’ deaths, I winced when I realized they described Master Luminara. She is the absolute WORST choice to go and comfort people. This is the woman back in the Geonosis arc who was totally cool with leaving her padawan to die. Any Jedi would have had better bedside manner than her!

-The scene where Ahsoka just takes out a group of Pykes in the tower is so well choreographed. I keep forgetting she doesn’t have her lightsabers. It’s a treat to watch how skilled she is in fighting just with her bare hands!

-This episode is pretty brutal! People get smooshed in lifts. There’s multiple torture scenes and fights that break out. Trace is straight up killing people with her blaster. This is the dark Clone Wars that I love. It pushes the boundaries of animation showing just enough to get the point across without being too graphic for a younger audience.

I’m both excited and wary to see how the Ahsoka’s Walkabout arc is going to end next week. I’ve liked this arc a lot. But as I said above, I hope they can stick the landing and not let the coming Siege of Mandalore completely takeover Trace and Rafa’s final episode.