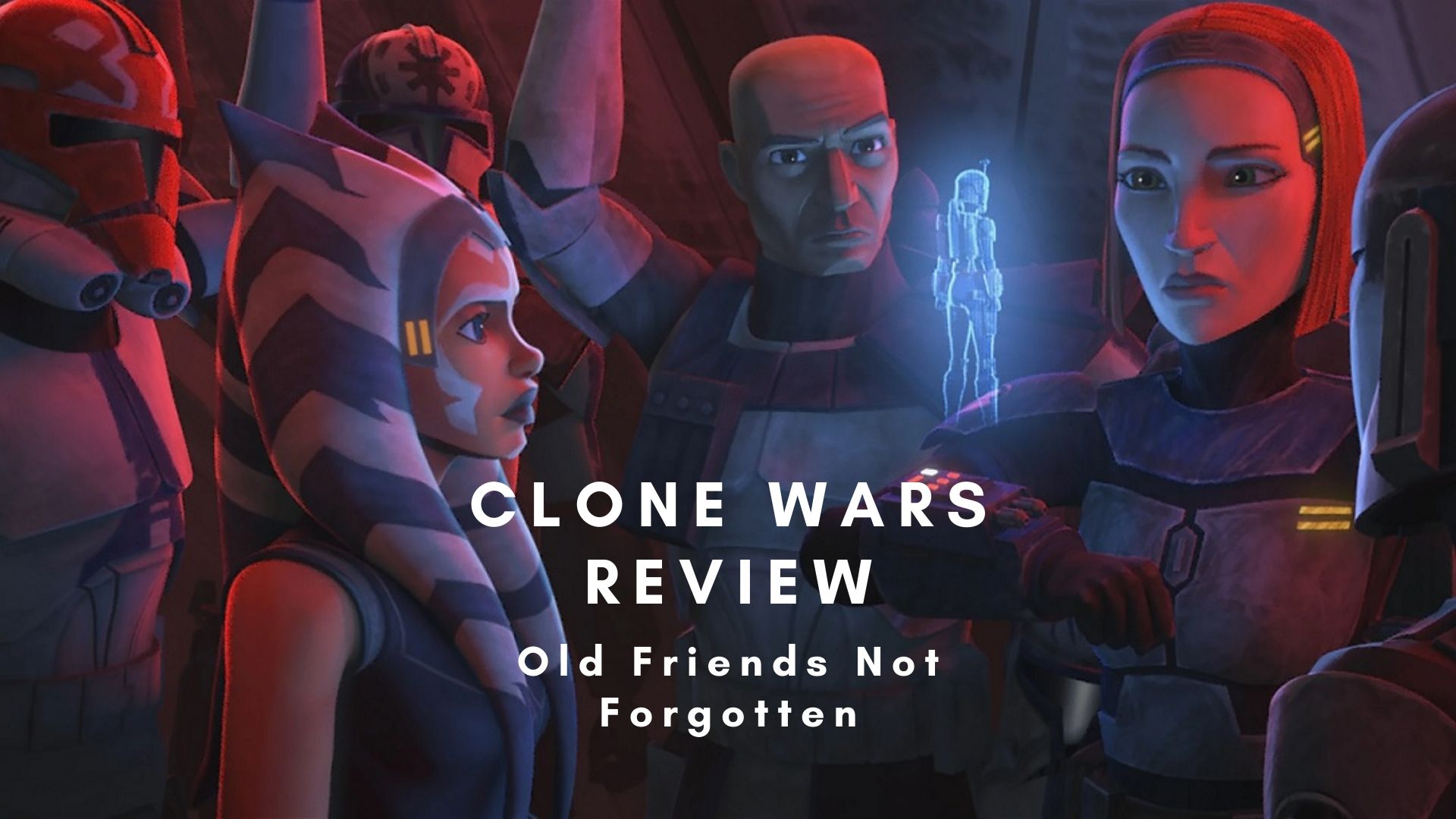 I find it so difficult to summarize my feelings watching the Siege of Mandalore. Waiting so long for the Clone Wars to have a proper finale on Dave Filoni’s terms means so much. Clone Wars was my entryway into the fandom. It’s what made me fall in love with Star Wars. Ahsoka Tano is my favorite character in the franchise. She’s saved me over and over whenever I was stuck in life. She’s pulled me out of depression. She’s been an inspiration to me for years to get back up. This show means everything to me.

It’s all because of Clone Wars.

And now it’s time for the beginning of the end.

“Old Friends Not Forgotten” kicks off part one of the Siege of Mandalore. The entire episode feels like a movie. Even opening with the old Lucasfilm logo is such a nice touch. I really hope that once all four episodes have premiered, they put them all into one long film. Clone Wars started with a film. It looks like it’s ending with one too.

Speaking of the film, there were so many wonderful callbacks to the Clone Wars movie. The opening battle mirrored the Battle of Christophsis. Anakin took Obi-Wan’s place faking a surrender to lure out the leader. Rex and his men hiding under the bridge to spring a surprise attack was like Anakin and Ahsoka hiding under the box in the movie. Ahsoka’s arrival was just like her first appearance coming off the ship. Ahsoka and Rex racing to get to the city was like Anakin and her racing to the top of the temple in the film.

It made the series come full circle narratively. But when looking at the two back to back, you can see just how far the characters have come. Anakin has been jaded by the Dark Side. Ahsoka isn’t snippy and naïve. She’s matured and found her own voice and confidence. Obi-Wan feels heavier than he did in the movie. He’s lost so much including Satine. There’s a weight to James Arnold Taylor’s performance during the Siege of Mandalore verses where the series started. I love the callbacks to the opening movie. It’s a great insight on just how far we’ve come.

Ahsoka and Obi-Wan’s back and forth is particularly telling. Thomas Harper from The Legal Geeks podcast broke it down in a nice thread on Twitter:

Ahsoka firing an icy cold dagger at Obi-Wan is a perfect moment in which she throws Kenobi’s conduct at her Jedi trial right back in his face and reveals just how deeply his perceived betrayal still stings her. #TheCloneWars pic.twitter.com/iFMnKA5FXC

That’s a really good thread. You should click on it and read the entire thing. Thomas has a lot of great threads about the episode. You should just follow him.

But to summarize it, Ahsoka’s journey is about seeing the corruption of the Jedi even if that means losing those she loves. Obi-Wan, Anakin, Rex, and Padmé are the closest people she ever had to family. In her eyes, Obi-Wan betrayed her. She never saw him fighting behind the scenes for her freedom. She only saw his silence during her trial. To her, he absolutely betrayed her. And to Obi-Wan, he believes he did everything he could for her. Neither Obi-Wan or Ahsoka are wrong in these scenes.

These emotional layers are what makes the episode so freaking good. We as the viewer know this will probably be the last time that Obi-Wan and Ahsoka see each other. And it was an argument, words spat out of hurt, and phrases of pain because Palpatine has placed them all in this impossible position. We know that Ahsoka and Obi-Wan will deeply regret this fight. They will mourn this precious time together spent arguing morals and not spent together in happiness.

I stated in my review for the episode “The Bad Batch” that Revenge of the Sith makes everything heightened. We know this is the end. We know that this is probably the last time Obi-Wan and Ahsoka see each other. We know these are moments wasted. The end is so painful.

Which is why I’m glad that we got some moments of friendship. Anakin wanting so desperately to talk with Ahsoka was needed for both the character and for fans. And when he gets those moments, to give her the lightsabers and to show her the clones’ loyalty, they feel earned and welcomed. Rex’s reunion with Ahsoka is so perfect. Ahsoka and Rex are the Clone Wars mains who, to me, is what the story is actually about. I’m glad that we’ll get to see the rest of the series out with them.

At first is bothered me that Rex and Anakin didn’t get some big goodbye with each other. But the more I thought about it, the more fitting it was. None of them are expecting Order 66 or the Republic to fall. This is just another day, another battle to them. They all have the hopes of seeing each other when the conflict is finished. It would be such fan pandering if we got these big goodbyes with swelling music as each one of them gushed their hearts out. What we have is perfect and what’s needed. It makes it all the more heartbreaking when in a few days of their time, all of their lives are about to unravel.

It was really cool to see the continued connections to Star Wars Rebels and to other media like The Son of Dathomir comics. Seeing the return of Gar Saxon with Rook Kast is really nice. It really sets up so much of Saxon-Ursa Wren dynamic in Rebels. Of course, we get the tiniest glimpse of young Kanan Jarrus as Caleb Dume. That makes me over the moon so happy!

But what I have truly enjoyed hearing are the Star Wars Resistance voice actors getting work in this season. Donald Faison voiced the tactical droid in this episode, joining Bobby Moynihan and Josh Brener providing their talent to the final season of Clone Wars. I really loved Resistance, so I’m glad to see they’re not forgetting the amazing actors that worked on that show. Fingers crossed that Christopher Sean, Suzie McGrath, or Myrna Velasco gets to voice some Clone Wars characters before it’s all over.

-My absolutely super petty note: Ahsoka’s eyelids bother me. They’ve never been that prominently animated before. They weren’t earlier in the season. They’ve never looked like that in the series. For some reason in this episode (and I can assume through the finale), they really drew some hard lines to her eyelids. I can’t stop staring at them. What the heck even? She gives me that Uncanny Valley felling at times, and it’s very unnerving.

-REX FINALLY GOT PROMOTED! I’ve always wondered why Rex was always a Captain throughout the entire series. It’s so he could be a commander in the finale. It’s so perfect.

-Rex and Ahsoka’s race down to the city might have become one of my favorite pieces of Star Wars of all time.

I’m so nervous about where the finale is heading. I’ve started a habit after each episode going back and rewatching the season seven trailers. Much of the trailer footage came from this episode. Other than the sneak peeks at Maul and Ahsoka’s coming fight, most of the shots are from “Old Friends Not Forgotten.”

It makes me wonder what we don’t know about yet. I’m so scared and excited to be here right now.