I know an episode of Clone Wars is amazing when I finish the episode, and I immediately need a nap afterward just to process what I watched. “The Phantom Apprentice” is everything I hoped it would be and more. The Siege of Mandalore arc easily lived up to the hype surpassing every expectation I had for the series. It has been worth the wait. What a time to be a Star Wars fan.

I remember when they first brought Maul back into Clone Wars, I saw it as fan pandering. I wasn’t that fond of the character. It wasn’t my favorite move. But now after Rebels changed my view of him and Clone Wars continues to show his brilliance, I cannot imagine these stories without him. He’s such a tragic character, never having a chance to be anything more than what he is.

What makes this entire episode so intriguing is that Maul is right. Maul is right about Sidious orchestrating the entire war. He’s right about Anakin getting ready to fall to the Dark Side. If Maul actually had his way and got the chance to kill Anakin, it could have possibly saved the entire galaxy. He could have outed Sidious to the Jedi as the Sith Lord. The Empire possibly wouldn’t have happened.

The twist here is the opposite of a My Little Pony episode. Love and friendship ends up dooming everything. Ahsoka so firmly believes in Anakin. She can’t see past her own feelings to believe that Anakin would fall. She defends Anakin to both Obi-Wan and Maul. Her emotions shield her from the truth. She loves Anakin like family. She can’t see his faults. For once, love does not win. It hinders and stops Maul from doing what actually needs to be done.

One thing that Clone Wars does so well is show why Sidious is such an amazing villain. I bet even if Maul had taken out Anakin, Sidious would already have someone else waiting in the wings. We know from books and comics he already sought out others. He groomed more people than just Anakin to fall to the Dark Side such as the Temple Guard who would become the Grand Inquisitor in Star Wars Rebels. Manipulating people is what Sidious does best. He takes his apprentices’ pain and frustrations, fills their heads with purpose, gets what he wants from them, and then throws them away. For every Maul, Dooku, or Anakin, there’s three more people to replace them in Sidious’ plans.

Agreed.
Maul felt he was special and part of something great.
Dooku wanted to help change a broken system.
Anakin wanted to save lives.
Ben thought he had nothing left to turn to.

I can’t wait for all the “what if” fanfics that will definitely come out of this episode. Ahsoka accepted Maul’s proposal to stop Sidious and team up with Maul. It was only when she realized it was to kill Anakin that she backed out. I found myself actually rooting for an Ahsoka-Maul team up. It made so much sense.  Both were hurt by the greater powers that be. Like the Ahsoka stories where Asajj Ventress helped her out, Ahsoka and Maul have so much in common. They’re two sides of the same coin. A team up would have been such an interesting story to see.

I’m still speculating there might be possible team up next episode. In the Charles Soule run of Darth Vader comics, a group of clones have their inhibitor chips activated. They mistake the Inquisitors to be Jedi when they see their red lightsabers and try to kill the Inquisitors. When Order 66 happens, it would be so interesting if the clones go after Maul as well. He and Ahsoka might have to have a short term team up just to escape alive.

Let’s talk about the Ahsoka and Maul lightsaber duel. I love the decision to use motion capture bringing back Ray Park for Maul and stunt woman Lauren Mary Kim for Ahsoka. The fight felt so real and grounded, which sounds weird to say in an animated show. Let me explain.

Being an animated series, it’s easy for the lightsaber fights to feel extravagant and over the top. We’ve seen countless times Anakin, Obi-Wan, and Ahsoka parkour their way through battles. They can be extremely acrobatic and crazy. But watching “The Phantom Apprentice,” Ahsoka and Maul felt real. It was obvious that they were played by actual people. It was like I was watching Maul again from The Phantom Menace. I got that same electric giddiness I felt as a child in the movie theater. It was such a brilliant move, and I tip my hat to the creators for making this choice. This is by far going down as one of the best lightsaber battles of the series if not in all of Star Wars.

It’s also fun that people are already putting “Duel of the Fates” under the battle too.

At first I was surprised that Maul gave Jesse back alive to Ahsoka and Rex. Sure, he was trying to get Ahsoka to join him. It was still a move that took me off guard. But the more I thought about it in a narrative point of view, this is very smart on the writers’ part.

Those of us who are super invested into the clones are going to be extra heartbroken when Order 66 finally hits. Jesse has been one of the longest running characters in this series. He made his debut back in season two in the episode “The Deserter.” We’ve followed all of his trials and tribulations over the series, most notably in the Umbara Arc. He overcame General Krell wanting to execute him and Fives. He’s risen through the ranks to become an Arc Trooper like his friends before him. He’s the only starting 501st member whose fate is still unknown. Now that we’ve reached season seven, it’s going to be so heartbreaking to see the end of his story play out. He’s more than likely going to turn on Ahsoka and try to kill her. She and Rex will either have to kill Jesse in self-defense, or he’s going to be left alive but still a turned clone. No matter what the outcome, it’s going to be devastating for me to see a clone I love so much have either of these fates.

-I’m so glad that Ahsoka and Obi-Wan had one more conversation. I wrote last week about how tragic it would have been if the last time they saw each other ended in a fight. They would have regretted it for the rest of their lives. It was such a relief they had this one last chance to make amends. And Obi-Wan was trying, in his own way, to make up for what happened with Ahsoka and the Council. It was such a touching scene.

-Bo-Katan and Gar Saxon’s elevator fight is amazing! While the Ahsoka and Maul content is the meat of the episode, Bo-Katan holding down the fight for Mandalore is just as good. Her brawl with Gar Saxon in the elevator was so intense. You could feel the claustrophobia through the entire fight.

-I definitely screamed, “Is that Paul Bettany!?” when I saw the young Dryden Vos from Solo. I am adoring all of these Solo connections this season.

I know the next two episodes are going to hurt me. All that’s left is for Order 66 to happen. I am excited and scared to be here. Now excuse me as I cry for the rest of the week knowing what’s coming for all of us. 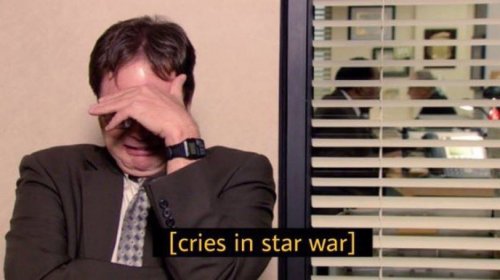