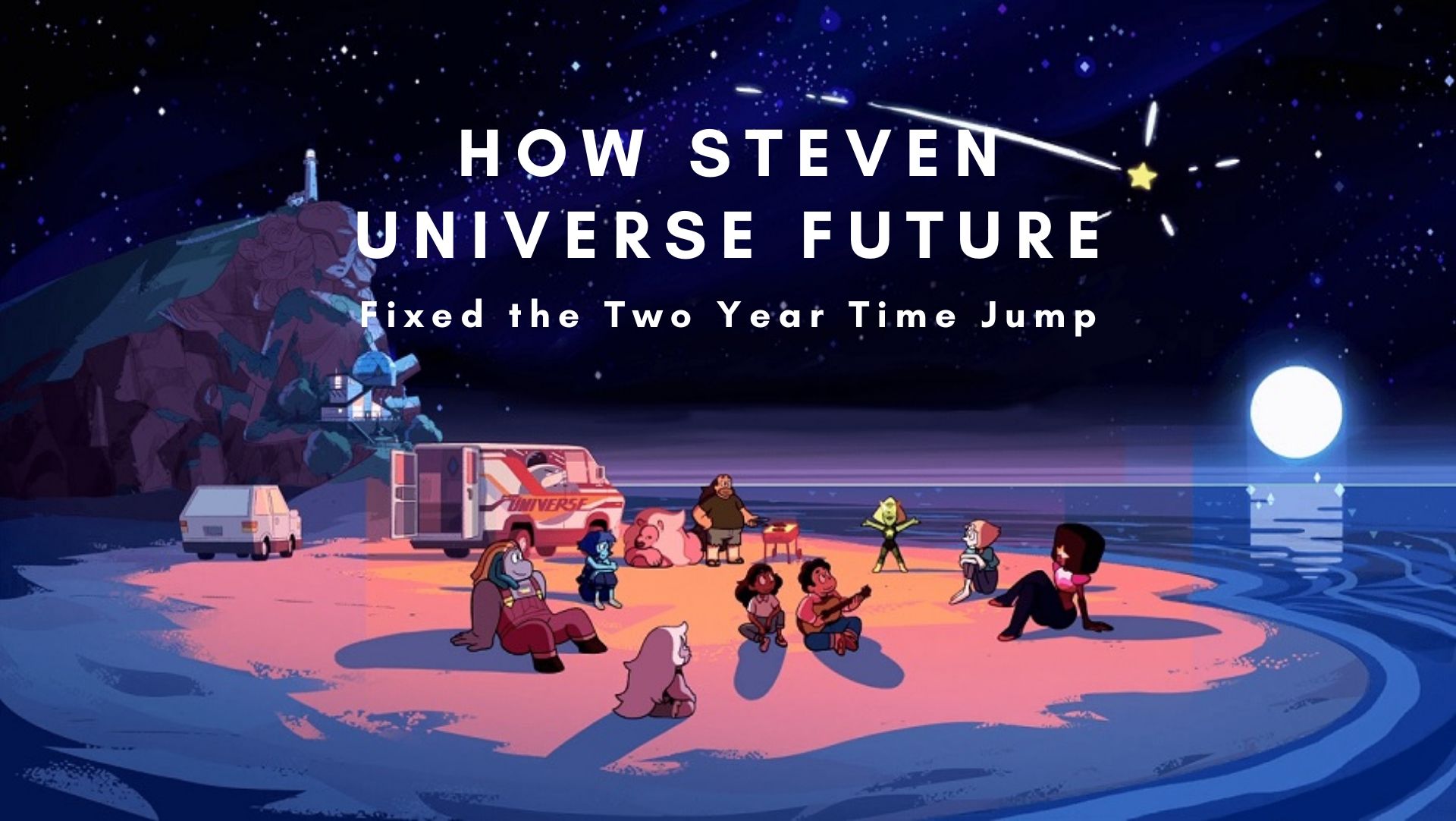 Special thanks to Ally Andrews for your feedback and insight on this article. Please check out her podcast Knights of Wren.

When the final season of Steven Universe wrapped up the Diamond Days arc with the episode “Change Your Mind,” I remember being stunned seeing the announcement for a coming movie. Soon after that, we got more announcements for a follow up show called Steven Universe Future. I was completely on the fence about this. While Diamond Days wasn’t a perfect ending to the show, I thought it was a fitting end. But also I always want more Steven Universe as it’s become an incredibly important show in my life. I had no idea where a new series could go from there. Diamond Days felt like a suitable ending for the show.

The Steven Universe Movie aired. I was lukewarm to it at first. But the more I watched it, the more I loved it. The songs are some of my favorite of the series. Deedee Magno Hall just SHINES singing every Pearl song. Spinel is one of the most complex and deep characters of the series. The animation is gorgeous. It’s such a solid entry to the show.

But there was one part of the movie that I had problems grappling with: 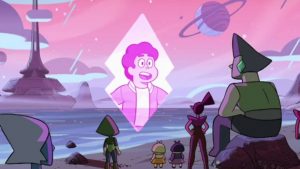 I found myself wondering about the stories that took place during Steven Universe and the movie. Many of these were stories that I was personally invested in. I wanted to see how they fixed the universe after the Diamonds’ tyranny came to an end. How did Steven help the Diamonds change their ways and make up for terrible rule? There were character threads I wished to see too. I wanted to see how Lapis became more at peace with herself. I wanted to see how new gems would integrate into Beach City, and how the residents handled now living with a bunch of sentient alien space rock people. How would Lars return to society after being a space pirate and coming back from the dead? What even is Onion? There were so many things I personally wanted to see in those two years.

This missing two years was a problem for me. It made me a bit salty towards Steven Universe Future. I had no idea how they could have a new series when there was two-years’ worth of stories still to be told. I went into Future thinking it was going to be bad.

I am so glad that I was wrong.

Steven Universe Future is such a unique entry to the canon. When I realized the story it was trying to tell, I was completely blown away. It’s so rare as an audience to see what happens after the Happily Ever After. How has the heroes change? Can they go back to their normal lives? That’s the entire premise of this series. Steven is not the bright eyed kid he was when the show started. Everyone else around him has changed. They all have different roles now. And Steven feels he’s being left behind.

Steven is a fixer. He has a strong savior complex that’s always been part of the series. A lot of Steven’s role in the original show is to be the support for everyone around him. He helps Pearl move past Rose enough to be her own person. This also mends Pearl and Greg’s relationship. He aides Amethyst in finding her identity. Every time Garnet falls apart, it’s usually Steven leading the charge to put Ruby and Sapphire back together. He’s the instigator in Lapis, Peridot, and Bismuth’s character changes. And with Connie, he helps her find her voice and confidence.

Even though we didn’t get to see it, that was his role in the two-year time jump. He fixed the rest of the universe. He brought peace to the cosmos and to Earth. He helped his aunts, the Diamonds, find new roles and paths. He helped them heal from their own trauma of losing Pink. And when we get to the movie, this is his role for Spinel as well. Being there for others is what Steven does best. It’s how he personally identifies himself as a person. 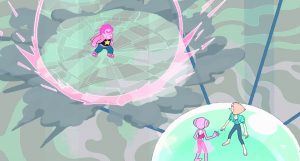 This is where Steven Universe Future really shows why that is a problem. There’s nothing else to fix. No one else needs help, because Steven’s work is complete. I used to think his line from the movie to Spinel, “There is no Happily Ever After. I’ll always have more work to do” was said as a plot device to give the movie an open ending. But now I think it’s more as a lead into Future’s story. The work that Steven needs to do is not to save the world. It’s to save himself.

How often are the other characters there for him? They all love him and support him. But how often has the Gems actually helped him mentally and emotionally?

In the Future episode “Everything’s Fine,” it’s so symbolic that he looks at a picture of himself painted as an angel before declaring that he’s fine. Steven has always been a good kid who never showed signs of his trauma catching up with him. And when it does show up, it’s usually Connie who helps him through it. But the gems really don’t get to see this side of him. One big reason is that Steven doesn’t talk to them about it, therefore they don’t know it’s happening. Steven accidentally isolates himself. He’s a fixer, and he doesn’t want to burden them. So when it comes to the gems, they honestly have no idea how to handle Steven in Future. They want to be there. It’s just they don’t know how.

Because Steven inadvertently keeps his support system away from him, he has no one to turn to when all of his past traumas start rising up. In one of the best scenes of the series, Dr. Maheswaran explains how pretty much everything from the previous series was traumatic and harmful to Steven’s mental health.

Future continues to show why Steven Universe is such an important show. It showcases realistic portrayals of mental health better than many shows in adult media. Steven clearly has PTSD. But the fixer doesn’t know how to make himself better.

Which brings me to the finale which is where I was able to finally lay to rest my gripes about the two-year time jump.

Steven turns into a huge monster as a reflection of his mental state. Over the course of Future, he does some pretty brutal stuff like lose control of his powers and shatters Jasper AKA the equivalent of murder in this universe (she’s fine! He’s able to fix her, because they’re sentient space rocks). The Gems can’t seem to reach Monster Steven. They beg and plead for Steven to turn back into a human, but he’s so hurt from pushing his support system away that he can’t hear them. Because Steven was always there for them, they don’t know how to help Steven through this. So everyone starts blaming themselves, turning Steven’s tragedy into their own grief.

“You hurt him, but this isn’t the time to make this all about you. That is not helping. Maybe Steven would care how sad you are, because he always puts everyone else’s feelings first. He can’t do that for you right now, because he needs us this time. We all had Steven when we needed him. The only person who never had Steven is Steven. He’s always been there for us. How can we be there for him now?”

His family pulls together to show Steven love and support. This reverts him back to a human. Steven breaks down into tears, but his support system is back together again to help him through it. The show ends with him leaving on a personal journey, understanding it’s okay to have flaws. He knows that he won’t be fixed overnight. Like he said to Spinel in the movie, he’ll always have work to do on himself.

As Connie points out, Steven Universe Future is about Steven and his journey. As I said above, so much of the original series is about Steven helping others. Future, on the other hand, is solely focused on his character and how the plot has affected him. Future isn’t about wrapping up every single dangling plot thread. It’s not about showing how other characters like Lapis and Jasper got to where they are in the series. This is about Steven, and that’s why it’s important.

It’s also not about me as a viewer. Sure, I see a lot of myself in Steven during Future. But I have to accept that I won’t get every single answer that I want in the show. As fans, if stories don’t work out the way we want then we often look at them negatively. Fans don’t always get what we want in media. We don’t always get what we want in life. This doesn’t mean that something is bad. We shouldn’t hold our own wants and desires against the story that Rebecca Sugar is telling. 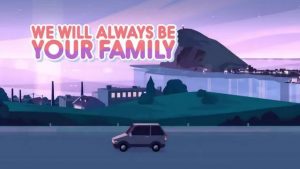 This is about Steven. This is about how we can see his journey and find our own peace in his story. Steven will continue to inspire people as new fans discover the show. But Future is how to find closure and peace for the character after the Happily Ever After.

What I needed was a satisfying closure to a show I love. I needed to see how our hero Steven learned to love himself and work through his trauma. I needed to see him take the next steps on his journey knowing that it’s going to be okay.

And that’s exactly the story that Rebecca Sugar told.