Retail Arbitrage for Breath of the Wild 2 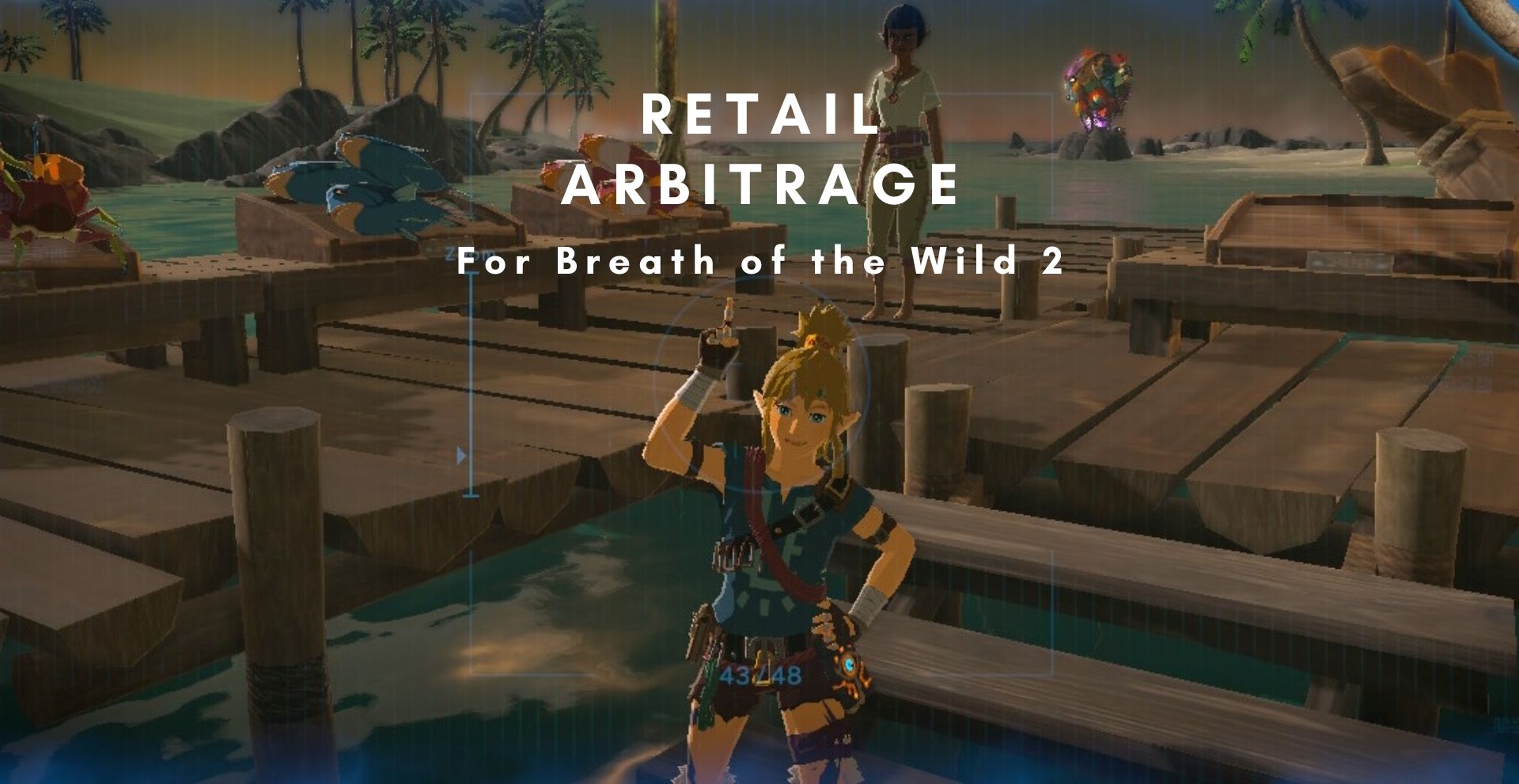 The Legend of Zelda: Breath of the Wild (BOTW) is one of my favorite games. I bought a Nintendo Switch just so I could play it. Plenty of articles, videos, and think pieces have been made to discuss why the game is so good. But as I was playing, there was one minor aspect that really took me out of the story. At first I blew it off, but the more and more I thought about it, I realized it would be a cool little addition to the coming sequel.

So today, I’m going to talk about the lack of arbitrage in BOTW and how BOTW2 could improve it by giving the player price options of where to sell goods.

“Really exciting topic to talk about,” I said sarcastically!

Okay, hear me out. I know this isn’t some mind bending speculation topic. But it really, really bothered me there weren’t more price options for goods in the game!

Arbitrage, more specifically retail arbitrage, “is the purchase and sale of an asset in order to profit from a difference in the asset’s price between markets.” To put it simply, you have an item and choices of several markets. You sell the item in the market that will make the most profit.

In BOTW with the exception of specialty vendors, the price of selling items to the various towns were all the same. It didn’t matter if you were in Goron City, Lurelin Village, or Kakariko. The selling price of an item was the same no matter where you went. I didn’t really think much about it until I was working on finishing some side quests.

In Gerudo Town, there’s a quest called The Mystery Polluter. A little girl named Dalia is trying to make a garden. Her water supply is being polluted by melon rinds. The player has to find where the melons are coming from. Link discovers a woman named Calyban who is munching down on some Hydromelons and chucking the rinds into the aqueducts which is causing the problem. Calyban says if Link will bring her ten Wildberries, she’ll stop polluting the waters.

There was one part of the quest that stuck out to me. Calyban specifically states that Wildberries are hard to find in Gerudo Town and rarely shows up at the market. But when Link goes to the market to sell Wildberries, they’re the same price as every other town.

It got me thinking about what items would be rare in certain areas. Shouldn’t those specific items sell for more money in the markets? I don’t think they should be a huge amount more. I’m not looking for price gouging in a Zelda game. But I do think it would be cool if certain items sold for maybe 10-20 rupees more if it’s not easily found in the region. It’s enough to make a player go out of their way to play the different markets and make extra cash while doing it. I think that would be a neat change in BOTW2.

What items would sell for more in the different towns? The rest of this article will be my speculations of what I would love to see.

Gerudo Town was probably the easiest to come up with. Being in a desert, any of the chilly, icy, or frozen foods that grant heat resistance should sell more. They’re functioning items in game that NPC characters could seek out. Also since it was stated in the side quest, fruits like Wildberries should be worth more too. Chillshrooms could also be part of that.

Fish! Specifically, salt water fish and crabs. In the area around Lake Totori where Rito Village is located, there are plenty of fresh water sources. But there aren’t a lot of water animals other than the occasional Hearty Salmon. I spent a good amount of time swimming around just to make sure.

Rito Village is so far away from the ocean. It’s on the opposite side of the map. Items like the various Porgies and Crabs should fetch a higher dollar price to the Rito. As for fruits and veggies, tropical items from the Faron region like the Mighty Bananas would be a good choice.

The Lanayru Province already has a little bit of everything. There’s a wide range of animals like water buffalo, deer, birds, and fish. With the Akkala Region to the north and Hateno and Kakariko villages to the south, very few items would be rare to the Zoras if they trade with other nearby races and cities.

Like for Rito Village, we must go to the opposite side of the map. Items like Tabantha Wheat or Voltfruit that can only be found in other regions would work. The Electric Safflina could be a rare item as well.

Lurelin Village has the opportunity to be one of the more unique towns on this list. Unlike all the other settlements that were either destroyed during the Great Calamity or lost their Champion, Lurelin Village was unharmed and is still intacted.

Because of this, I think Ancient Guardian parts could be worth more. The other regions are littered with the empty shells and decayed Guardians. Many still roam the lands. But there’s really not many of them in the Faron Region or near Lurelin Village. That could make the Ancient parts worth more to these seafaring people.

Goron City stumped me for a bit. Unlike all of the other regions, Gorons don’t eat food. They eat rocks. They sell and trade gems to other races, so a Hylian like Link would have trouble cornering that part of the market. As I ran around Goron City looking for inspiration, I came across the Gerudo woman Ramella. She doesn’t wear armor to protect herself against the volcanic elements. She says she slathers herself in Fireproof Elixirs. This items would be pivotal to the Goron economy. If they want travelers and visitors to come to their city, other races would need the Elixir to protect themselves.

One of the ingredients to make a Fireproof Elixir require monster parts. This would be the item that would be worth more in Goron City. The rarer the monster part like a dragon scale, the more rupees Link would get from it.

These two villages gave me the most trouble. Like Zora’s Domain, they’re diverse in their flora and fauna. Both are near water sources for fishing. Travelers are often seen on the roads between the villages to take goods back and forth. This one really stumped me.

While I was looking for inspiration for Goron City and roaming around the outskirts of Death Mountain, I saw the dragon Dinraal flying in the distance. I mused about how the dragons have very specific areas they roam through the world. Digging through various fanmade maps and images, I studied all three of the dragons’ paths and realized that they’re near all the other races and settlements except for Hateno and Kakariko.

Well, for the most part. The Lanayru dragon Naydra is the closet to the two villages, but Mount Lanayru is still a bit of a trek to get to. Also, Naydra is only freed in a side quest. A player could opt not to free the dragon. If they make this choice, then there are no dragons near Hateno and Kakariko Villages.

Therefore, dragon parts should fetch a higher price in these two locations being much rarer items.

To me, Tarry Town is the exception to the playing the market game. Being a mix of all the races together, they each bring their own items to this place. There should be no rare items since the characters all provide them. All items are at the flat selling price rate as BOTW.

Of course, all of this speculation is based off of BOTW. Who knows what the world of BOTW2 will look like. Maybe in the sequel, Castle Town will be rebuilt. Maybe Tarrey Town has become a metropolis after remodeling the Akkala Citadel and building a city inside of it. Hyrule could be bustling with trade and commerce letting the races swap their goods. Maybe all the races aren’t separated and live mixed together. We’ll just have to see.

What do you think? Do you think there should be different prices for rarer items in various towns? Let me know in the comments.