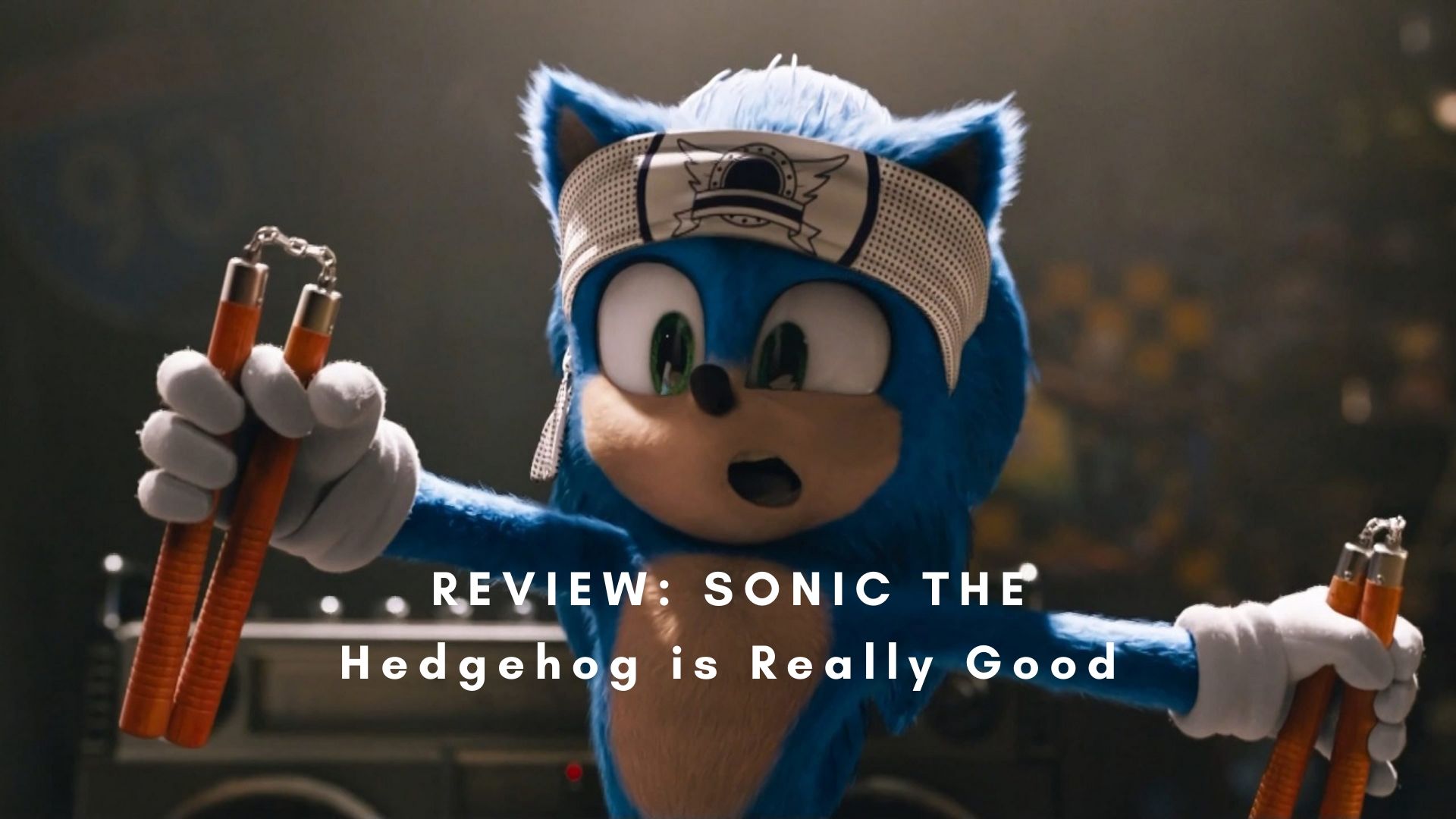 Sonic has always been one of those fandoms I’ve dabbled in pretty much all my life. I remember having a SEGA Genesis that I shared with my older sister. I would watch her play Sonic the Hedgehog for hours, and she would help me with the harder levels. I didn’t mind sharing. That was because I was a fan of the Sonic comics which were all my own. Sonic and Knuckles #1 from June 1995 was my very first comic book. I still have that issue, missing it’s cover because I read it over and over again. It’s still the pride of my collection despite it’s rough condition, because you never forget your first comic book.

I was obsessed with Sonic and his friends as I watched all of the early shows from the Adventures of Sonic the Hedgehog, the 1993 SatAM show, the OVA, and (I’ll admit that as a kid) I even loved Sonic Underground. These shows are what led me to discovering the comics. I would beg my mom to take me to the grocery store or our local comic book store to get new issues to hold me over between when new episodes aired.

But over the years, I’ve fallen out of the fandom. Some of this comes from age as these comics didn’t appeal to me as I got older. A lot of the writing choices and a lawsuit also turned me off from the series. Two of my favorite characters growing up were Princess Sally Acorn and Julie-Su the Echidna. They were some of the first well written female characters that impacted my young life. As Sally got replaced by other characters like Amy Rose and the Echindas story with Julie-Su were wiped from the canon, I didn’t have much of a reason to return to one of my first fandoms. I always kept a distant eye on things, but I didn’t have the obsession I had as a child.

So when I heard there was a Sonic live action movie coming, I was intrigued but wary. All of the Disney live action movies have worn me out with these kind of films. Though, I was delightfully impressed and really enjoyed Detective Pikachu. With Sonic being one of my first loves, I was interested to see what they would do with the film.

Spoiler: I love this movie! 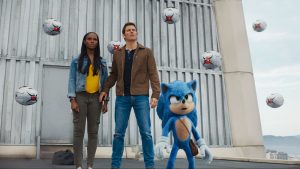 Sonic the Hedgehog’s story itself isn’t anything groundbreaking, but I don’t think it should be. This is a Sonic movie based on a video game. It’s supposed to be fun. The moment you start thinking too hard about it, it’s going to become less enjoyable. It’s not a perfect movie, and it does have story flaws. At the same time, Sonic isn’t trying to be anything that it’s not. It’s not trying to change the world like Blackfish or Supersize Me. It’s a movie about Sonic the Hedgehog on an adventure with new friends. Just by being itself, it became the highest grossing video game movie in North America. And it truly deserves that title.

What I loved about Sonic is they gave a new origin story to the titular character. It’s a great entry point to people who might be new to the franchise. But they still had plenty of the comic and game mythos in there for old fans looking for Easter eggs.

Ben Schwarz does a great job voicing Sonic, making him high energy but never too annoying. And when he is too annoying, the movie is a bit meta and calls the character out on it. Sonic is a little younger having a childlike energy. He hasn’t had the time or interactions to develop him into who he is in other media. It’s also an interesting look at the psyche of the character, as we see how no structure or support has affected him. I like this fresh origin that feels like the character has somewhere to grow in a sequel unlike Detective Pikachu. I’m concerned about what a Detective Pikachu sequel will look like since the movie had a closed ending. Sonic, on the other hand, had a wide open ending allowing the character and the narrative to go places. Unlike Pikachu, I’m actually excited for the next Sonic story. A Pikachu sequel feels more like a cash grab.

I was pleasantly surprised with how diverse the cast was. Unlike some shows and movies where diversity feels like it’s box checking, this felt really natural here. Everyone also played their roles really well. James Marsden made a good Straight Man character to Sonic’s chaotic nature with Tom Wachowski. Sonic and Tom’s chemistry held so much of the movie together making for an emotional end. Tika Sumpter’s Maddie Wachowski was capable in her own rights while supporting her husband. She’s a veterinarian whose ready to throw down for the man she loves.

All the supporting characters were so fabulous. I loved the people of Green Hills which added so much vibrancy to the small town setting. Every small town needs or has a Crazy Carl and an Officer Wade. Green Hills reminded me a lot of the show Gravity Falls in a way, both playing with those small town dynamics. Lee Majdoub’s character, Agent Stone, was so endearing and stole a lot of the movie for me. He countered Carrey’s Robotnik so well, giving him weight and balance. I was just as invested into the Robotnik-Stone duo as I was the Sonic-Wachowski.

Yes, I also ship Agent Stone and Robotnik like the rest of the internet! 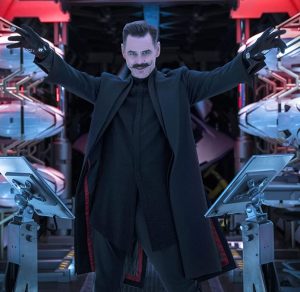 Speaking of Robotnik, Jim Carrey is by far the star of this movie. To me, his performance way overshadows Sonic. I love movies when you can tell when an actor is having the time of their lives. And Carrey is having a freaking blast playing this role. It’s so reminiscent of his classic work from the 90’s. In a way, it’s fitting since Sonic the Hedgehog debuted in 1991. Carrey’s performance has that synergy to feel both classic and modern. It’s clear he’s calling back to his older work, but he’s updated it as an actor who has had decades to hone his craft.

Carrey is Dr. Robotnik. I never doubted him for a moment. Sometimes in his other movies like The Grinch or Fun with Dick and Jane have that one scene where you go, “And here’s the Jim Carrey being Jim Carrey scene” and he does his noises and gags. It always takes me out of the movie when that happens. But he doesn’t do that here. Carrey is so dedicated to this role that I can’t imagine anyone else ever playing Robotnik. This is one of those iconic roles where I bet you’re going to see Carrey’s influence on the character filter back into the comics and videos games. He took the source material, made it his own, and it’s going to influence the Sonic franchise going forward.

And I hope Agent Stone goes with him.

Sonic the Hedgehog is a wild and fun ride. It’s definitely not a movie to think too hard about. It’s not a perfect movie by any means, but it’s just a really good time. The characters are what really makes this story stand out. There’s not a single person I would cut from the cast. It made me excited to revisit these characters I loved as a kid. It made me want to go back and pull out my old Sonic and Knuckles comics. I want to find my video games again. I want to rewatched those old shows.

Phillip M. Jackson, the creator of the webcomic Sequential Art, summed up my feelings quite nicely in this comic: