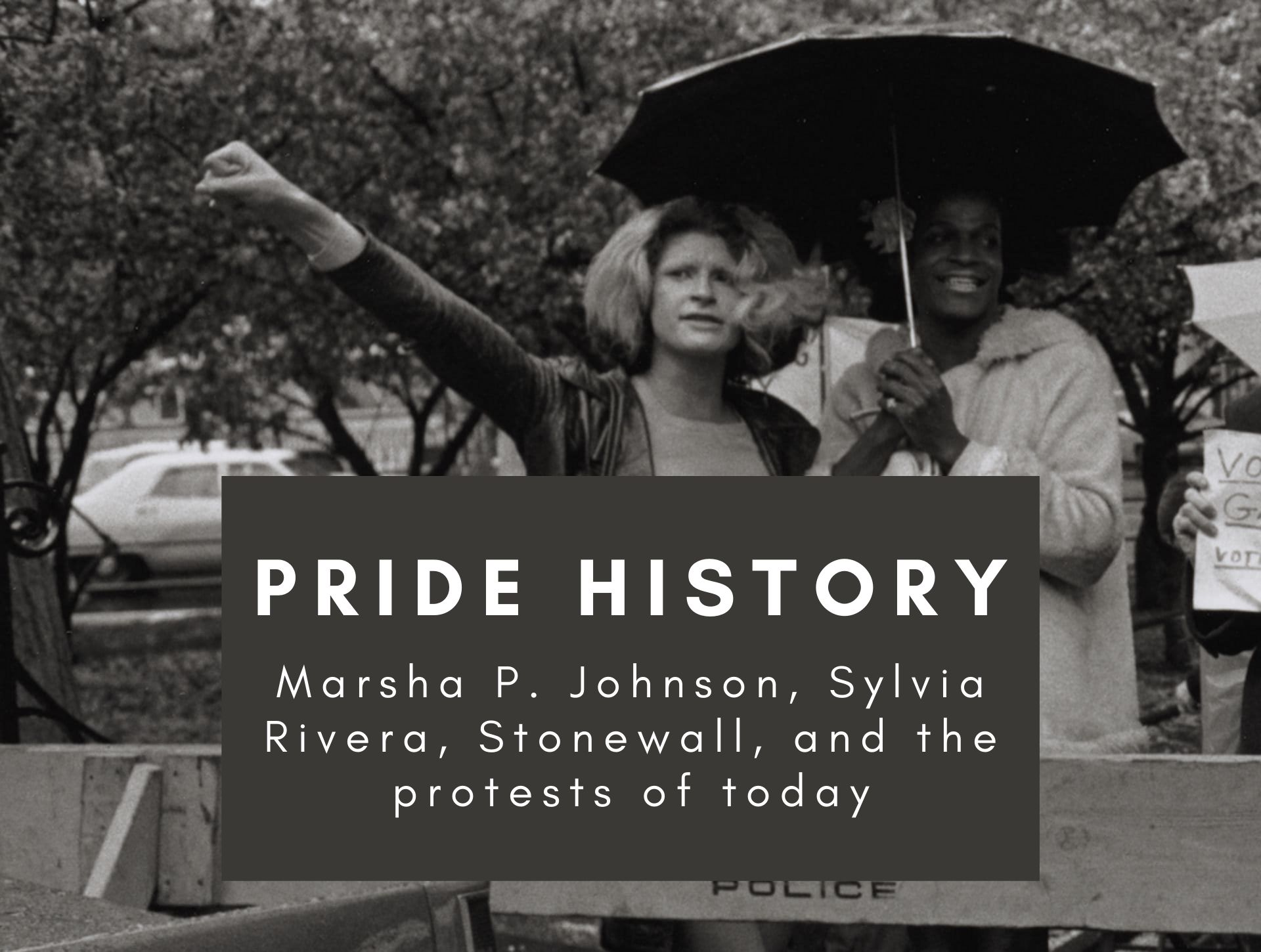 This Pride month is a harsh one as I look at the state of the world. For one, there is a global pandemic that will for sure cancel planned parades and events. More importantly, there are protests happening as people rise up against police brutality in our nation.

Perhaps it is quite fitting Pride is happening now. Pride was built on the backs of black and brown trans women who rioted against police at the Stonewall Inn. They rioted because they wanted to exist. They wanted to be treated equally. They wanted to be seen as human. They had enough of an unjust system.

Pride isn’t just a celebration of how far we’ve come. It’s an ongoing conversation and continued work about how far we still have to go. Karleigh Chardonnay Merlot, a transgender activist and operator at Trans Lifeline, said it best in this article from USA Today:

“I’m one of those who believes that Pride is a protest, but I’m not saying take the party away. I’m saying make sure we don’t forget the real reason for the season as well.”

The story of the Stonewall Riots is more important than ever before. I’m going to give a relatively brief summary of Stonewall, but links will be provided at the end if you wish to continue your research.

Located in Greenwich Village in New York City, the Stonewall Inn was a gay bar which was prominently frequented by people of color. In the early 1960’s, mayor Robert F. Wagner, Jr. tried to rid New York City of their gay bars by revoking liquor licenses to any bars who served queer men. This led to many bars being shut down prior to the Stonewall Riots leaving the inn as one of that last holdouts. Stonewall was ran by Genovese crime family which allowed them to pay the police to not shut them down for serving liquor to gay men. Still, this led to many police raids on the building where they would arrest men in full drag, women who didn’t meet their standards, and others.

On June 28, 1969, a police raid occurred that would change the course of history. The raid started normally (which is still awful) with police officers frisking female lesbians by feeling them up to make sure they were women. They would force men to reveal their genitalia to check their sex. They were preparing arrests for any men dressed as women.

As they started to release some of the people from the bar, the police realized the patrons weren’t leaving. They were gathering outside and waiting. Within minutes, the crowd grew to 100 to 150 people. The police patrol wagons were beginning to arrive. Although it was peaceful at first, tensions started to rise as more arrests were made.

Two women being Marsha P. Johnson, a black trans woman, and Sylvia Rivera, a Latinx trans woman, are thought to be the ones who threw the first brick. Some reports said it was a shot glass. Some say it wasn’t either of them, though they came to represent the people who were there. The majority of the people at Stonewall that night were black and brown queer people.

Sylvia Rivera later remembered, “You’ve been treating us like shit all these years? Uh-uh. Now it’s our turn!… It was one of the greatest moments in my life.”

Violence erupted because after years of having everything taken away from them as many were homeless, not treated equally, and not being seen as human beings, these people had nothing left to lose. The system failed them because of their sexuality and the color of their skin. They decided that enough was enough.

Homeless street kids who saw Stonewall as their only home fought back. Drag queens, black and brown trans women, butch lesbians, queer men, and even folk singer Dave Van Ronk, who happened to be in a nearby restaurant, came over to see what was happening, and decided to stay because he recognized the injustice, all fought back. The police on the scene ended up barricading themselves inside the inn until help could arrive. And the police reinforcements surely did come for them.

“I had been in enough riots to know the fun was over… The cops were totally humiliated. This never, ever happened. They were angrier than I guess they had ever been, because everybody else had rioted… but the fairies were not supposed to riot… no group had ever forced cops to retreat before, so the anger was just enormous. I mean, they wanted to kill.”

The police arrived with reinforcements and started arresting whoever they could get their hands on. The Tactical Patrol Force formed a line and began marching down the street to try and clear it. In response, the queer protestors formed a kick line and sang, “We are the Stonewall girls/ We wear our hair in curls/ We don’t wear underwear/ We show our pubic hair.”

The police then rushed them with batons and nightsticks. The people scattered and ran for their lives. One participant stated:

“I just can’t ever get that one sight out of my mind. The cops with the [nightsticks] and the kick line on the other side. It was the most amazing thing… And all the sudden that kick line, which I guess was a spoof on the machismo… I think that’s when I felt rage. Because people were getting smashed with bats. And for what? A kick line.”

What followed was another night of riots and more organizations taking notice. The conversation started gaining national attention as more government officials, celebrities, and everyday people started calling out the brutality against queer people.

More protests and organizations were formed. Marsha P. Johnson and Sylvia Rivera became founding members of multiple groups like the Gay Liberation Front and Street Transvestite Action Revolutionaries (STAR). STAR was a homeless shelter for LGBT youths, the first shelter of its kind in the country.

But the conversation started to shift around Johnson and Rivera as many white gay activists began to push them out. White activists argued that people wouldn’t take them seriously because of their skin color and plastic heels. Rivera found some allies in with the Puerto Rico movement through the group Young Lords. But she lost their support when the group was disbanded by COINTELPRO, a covert and illegal operation by the FBI.

Rivera and Johnson were constantly blocked from speaking at gay rights events. As transgender people were being forgotten as the gay rights movement were shifting to try and “normalize” gay people, Rivera and Johnson wouldn’t be silenced. This came to a head during the Pride March of 1973. Rivera had been banned but stormed the stage anyway. Timeline summed up what happened:

Meanwhile, the gay liberation movement became even more hostile to transgender people, turning their backs on the ongoing police brutality they faced. She [Rivera] pushed and fought her way through people she once considered her allies, shoving them out of her way to make it onstage. She thundered at the crowd of gay activists as they tried to boo and curse her off the stage: “I’ve been trying to get up here all day, for your gay brothers and your gay sisters who are in jail, and write me, every motherfucking week, and ask for your help. And you all don’t do a goddamn thing for them.”

She started on an articulate rampage, forcing the audience to at least hear about the beatings and rapes her children had endured in jails and at the hands of police, and castigating the mainstream gay rights movement for abandoning them. In the end, though, she broke down in sobs as she led the rally in a cheer: “Give me a G!” she demanded, and spelled out “gay power,” a chant the crowd joined reluctantly at first, and then with enthusiasm. Rivera made it almost to the last letter before she started crying.

The Washington Post adds Rivera saying, “’If it wasn’t for the drag queen, there would be no gay liberation movement. We’re the front-liners.’ She was booed off the stage.”

Soon after, Rivera tried to commit suicide. It was Johnson who found her and nursed her back to health. Rivera left activism for a while after that, but Johnson continued. She was featured in Andy Warhol portraits. She worked during the AIDS crisis by marching to raise money as her friends died of the disease. And after the mysterious death of Johnson that was ruled a suicide despite her having a blow to the back of her head, Rivera returned to activism in the 90’s to continue her work until her death in 2002.

When I look at the story that Pride is built on and the journey our black and brown trans mothers went through, it’s not hard to wonder if anything has changed at all. Today as I write this, protests continue for George Floyd who died from police brutality. Ahmaud Arbery was shot for jogging as a black man. Tony McDade, a black transgender man, was killed by police just the other day. Chynal Lindsey and Muhlaysia Booker are just two of many trans women who were killed just for existing. In fact, black trans women only have a life expectancy of 35-37 years old. That particular group are killed at a much higher rate. In 2018, the Human Rights Campaign reported that four out of five anti-trans homicides were against trans women of color. But even then, the data is incomplete because of misgendering by police reports leading to a fear that this could be a higher number.

On one hand, queer rights have come a long way. But there is still such a long way to go. As we go into Pride month, we need to understand that the rights of trans black women or even queer people of color are not the same as white queer people. They face much more discrimination for the same reasons that George Floyd, Ahmaud Arbery, Tamir Rice, Trayvon Martin, and so many other black people have faced on top of also being queer.

We cannot be like the gay rights activist that pushed Marsha P. Johnson and Sylvia Rivera out of the movement they started when they threw bricks at Stonewall. So as we put on our rainbow colors for June, we need to be aware of our history. We need to know that gay rights were built on the backs of black and brown trans women. And we need to shut up and let black and brown people of color be heard, both queer and straight. We must help in amplify their voices.

If you wish to help, please donate to the Sylvia Rivera Law Project.

Here is the list of sources I used to write this article: