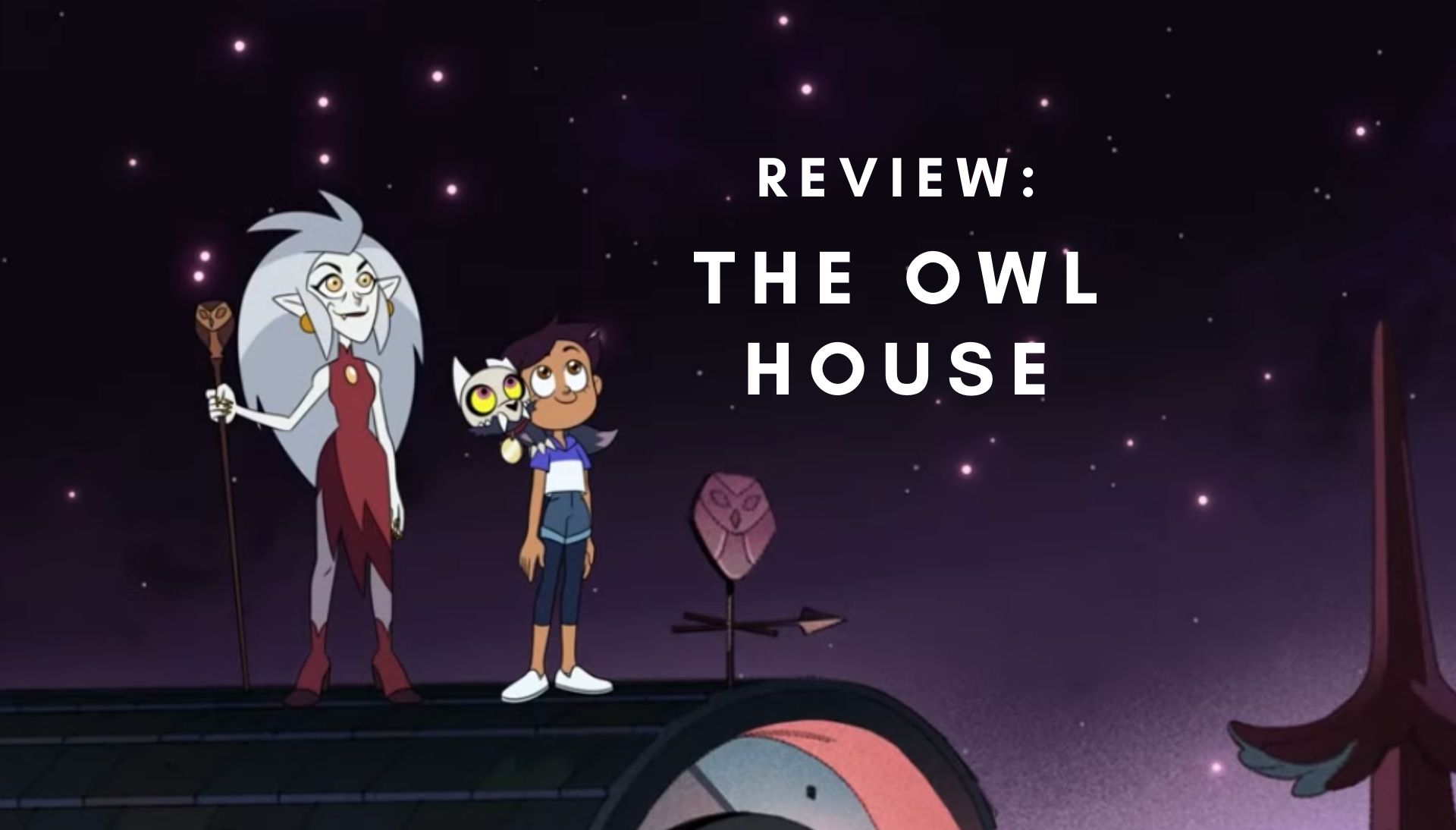 I recently did a watch of The Owl House and quickly binged through the first ten episodes in about two days. It’s created by Dana Terrace who was a storyboard artist for Gravity Falls and director for the current run of DuckTales. These are two shows I adore so much, so I wanted to give The Owl House a try. The series is currently in a midseason hiatus. With some rumors that it’s coming back in the summer and the release of a trailer for season 1B, I think now is a good time to look back at the series so far.

The Owl House is about a human girl named Luz who accidentally stumbles into the demon world and finds herself on the Boiling Isles. She meets up with a witch named Eda the Owl Lady and her pet/sidekick/roommate named King, who is a small and adorable demon with a grandiose outlook on life. Despite having no magical abilities, Luz decides she wants to learn magic and become a witch like Eda. So Eda takes Luz under her wing and becomes a mentor.

Where Owl House really sings is in the world building and the characters. Those two elements work together so well showing a real depth to the story. Everything is a bit terrifying in the beginning for Luz. But as we discover more of the world around her, we see that the Boiling Isles and its inhabitants are no different from the human world she’s from. Sure, there’s magic, demons, and curses. But deep down, the people of this world want freedom, love, and acceptance. Hanging above the entire show is the Emperor and his rule. The various witch covens are censored by his laws, with only his most loyal sorcerers allowed to use their full magic. People within his kingdom must fit within his conformity. The world of Owl House is deceptively deep. Once the viewer starts really breaking down the details of the show, there’s a sinister underbelly in the world. It seems to be pointing to the powers that are actually in charge.

The characters are also just a complete joy. Luz, Eda, and King have become an interesting family unit in their own way. Luz is optimistic, delightfully weird, but also has a grounding factor about her. She is clearly what Eda and King needed in their lives. Eda’s growing too, realizing she can’t be entirely selfish anymore with Luz as her ward. And King is King, being a tiny little adorable once monarch. I have a sneaking suspicion we’re going to get a few heart wrenching stories for him in the future.

But the supporting cast really adds so much to the overall story too. Amity Blight, Luz’s rival, might be the best written character on the show so far. She comes off as the stereotypical bully who is also the popular girl. She’s passive aggressive to Luz and her friends. She’s ambitious by wanting to join the Emperor’s Coven. She wants to be the best while having a respect for rules and order. Where Amity’s writing truly shines is when we get to see her moral compass. We see why she is this way, a large part because of her family. When she realizes things are wrong, she does speak out and step up. We see that she’s a foil for Luz and wants acceptances just as much. Amity makes Luz a better person, and they’re really going to have some awesome character development to watch.

If I have any gripes about the first ten episodes, I think there’s just a bit too much plot going on.  Eda has a secret revealed in episode four. I would have liked to have that drawn out to maybe a midseason reveal. Maybe have it hinted at for multiple episodes or maybe even the entire first season. Owl House feels like it’s constantly pushing back and forth between Luz and Eda’s overarching stories. Just as either narrative starts getting some momentum, the other one crashes in and derails it for a few episodes. There’s also the many subplots being laid down too like with the Emperor and his goons, Luz’s school friends, King and his past, and Owlbert who is Eda’s Palisman.

Now I do admit that I am only judging on half a season. I have no idea where the story is going and what the big plan is. I’m interested to look back on these episodes once season one is complete. But as it stands, there’s so much going on in the first ten episodes. It’s packed with so much plot that I had difficulty getting hooked in the beginning. It felt like huge exposition dumps that wasn’t executed smoothly. The Owl House really sings and succeeds when it slows downs and lets story beats develop naturally.

My gripe aside, I absolutely recommend The Owl House. I have fallen in love with this show. It’s starting to find its footing just at the midseason hiatus. The animation is fluid and beautiful. The music is a nice mix of fun when it needs to be and creepy when it digs into the more horror elements of the show. The characters are relatable and quirky. There’s a lot of great things happening here.

You can check out the first episode of The Owl House over on YouTube and see what you think for yourself.