Why She-Ra Will Go Down in History 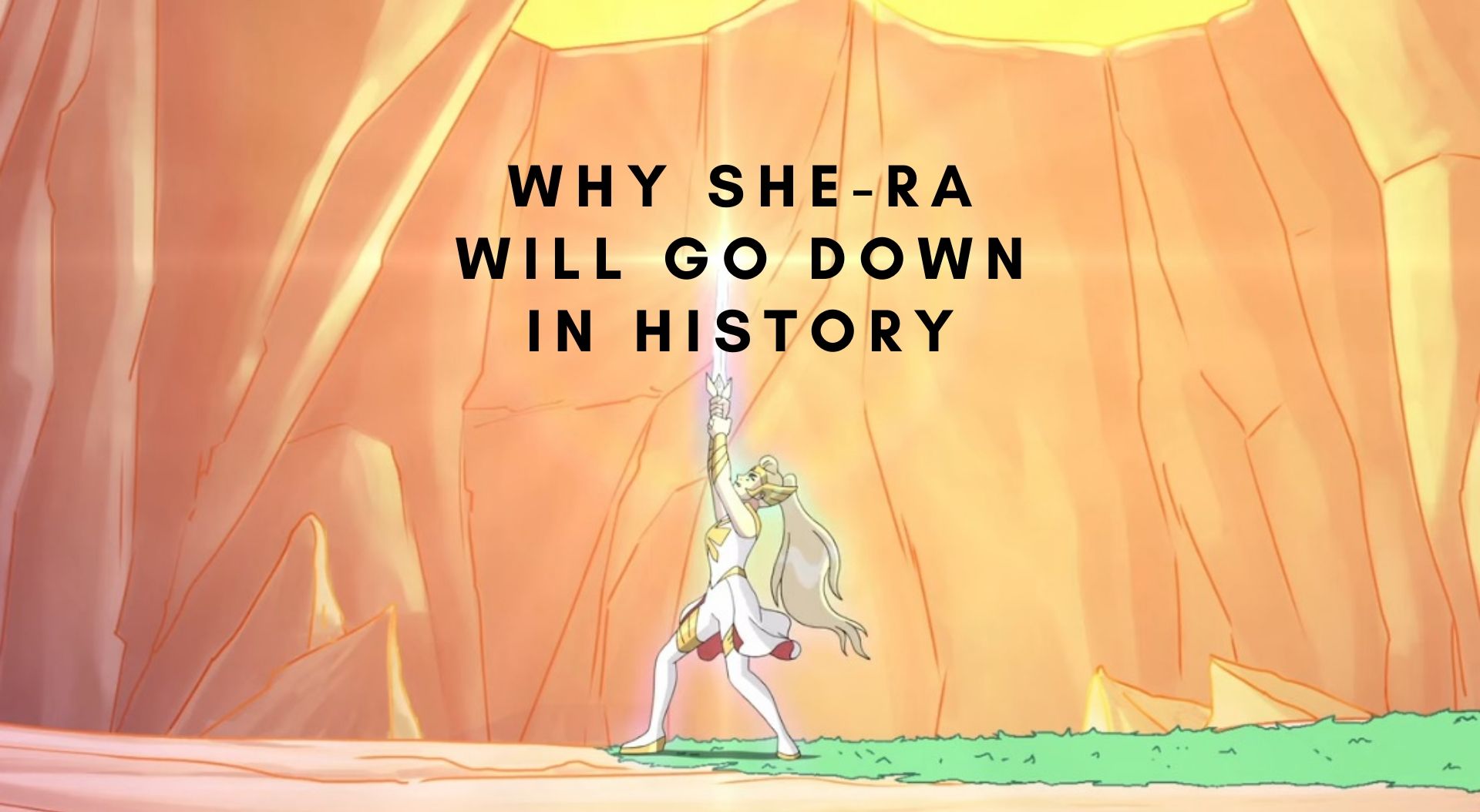 This will contain spoilers for She-Ra season five

There are pieces of media that change the course of entertainment. They are important stepping stones that shift paradigms and set the bar for whatever comes after it. I wrote about how Avatar: The Last Airbender changed the course of animation history. I also covered how Steven Universe showed how animation can really tackle mental health. And now that the fifth and final season of She-Ra and the Princesses of Power has completed, it firmly stamped its name in the history books of being a game changing show.

What She-Ra did was build off of the work before it. It took the diversity and well written female characters of Avatar. Showrunner Noelle Stevenson fought for queer content in her show just like Gravity Falls’ Alex Hirsch did around 2014. It took the groundwork of Steven Universe with its own portrayals of mental health and queer content. It took cues from Adventure Time, The Legend of Korra, My Little Pony, and so many more shows. Then, She-Ra lifted up all of their hard work. It thrived and made a show the world had never quite seen before.

I know that She-Ra is going to go down as one of the most important shows ever made in our history. Season five cemented that for me.

For starters, it completely changed the rhetoric around how to do LGBTQA+ content. 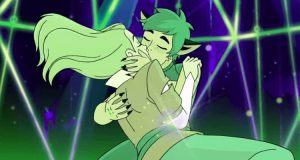 The norm for any media, both adult and animation, is the heteronormative couples are usually the main focus. Straight couples are almost always the titular or central characters of a show. They’re allowed to have messy storylines. By “messy” I mean full of drama where they come together and move apart. Their psyches are deeply explored as a series progresses. And when the straight couple is together, it’s blatant and obvious. They have huge kissing scenes scored with beautiful music. The story is built up to be these big important moments.

Meanwhile, normally any LGBTQA+ couples are done through subtleties. A lot of this is from the history of censoring queer media and characters. These stories have to rely on a lot of extra work such as queer coding (more on that here). Queer characters are almost always support characters. Their love is portrayed by hints or muted visuals cues. They might get one big kiss in “a very special episode” and then get sidelined for the main hetero couple. And then the drama of queer relationships tends to be a hot bed of damaging tropes like the “Bury Your Gays” stories.

She-Ra threw this out the window. The gay story lines are the main story. Adora, who is She-Ra, is a queer woman. She’s in love with Catra who is the other main character. They have five seasons of pain to overcome from their toxic upbringing. Catra and Adora hurt each other, understand what they did, and learn to forgive. They get to admit their love, have a huge kiss, and their gay love is what literally saves the galaxy and defeats the big bad, Horde Prime. There are no questions about how blatantly obvious this queer representation is. 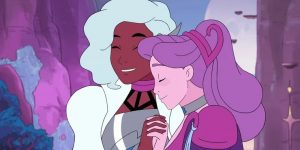 And it’s not just Catra and Adora. Princesses Spinnerella and Netossa are openly wives. They talk about their anniversary, who’s going to clean their house, and share many kisses over the course of the show. Scorpia was clearly in love with Catra for many seasons until it’s heavily implied she fell for Princess Perfuma. We even get to see little nods to other queer women when Huntara is openly flirting with a barmaid.

Most importantly, none of the queer characters die. Which is so refreshing and such a relief.

This is in contrast to the straight couples in She-Ra. The show completely flips the script by making them the subtle side stories. Bow and Glimmer admit their feelings and share a forehead kiss. Hordak and Entrapta never say I love you, only stating their strong friendship. Sea Hawk professes his love for Mermista, and they’re seen blushing and holding hands. Each couple does get pivotal moments that helps beat Horde Prime. But unlike Catra and Adora, their relationships are supporting roles to the main power couple. 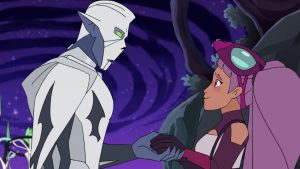 And I’ll admit, I’m a huge Entrapdak shipper. They are my favorite couple of the series. I would have loved to see them admit their love, have a passionate kiss, and ride off into the sunset together. But I also understand that Entrapdak is not the most important, history changing story being told here. We’ve seen over and over again narratives that’s told Hordak and Entrapta’s story. We’ve seen Bow and Glimmer before. We’ve seen Sea Hawk and Mermista. But we’ve never truly had an Adora and Catra tale done this way.

The queer stories told in She-Ra are so fresh and new. We’ve had smaller scale versions of them before, but never so open and well done. We needed She-Ra to be so unapologetically gay to show how to truly write these stories. The hetero couples needed to take a back seat so the queer couples could be open and purposeful. More importantly, it need to be normalized in the world. Spinnerella and Netossa had to be just a normal as Bow and Glimmer. The drama of Adora and Catra had to be just as heart wrenching as Entrapta and Hordak being separated. The gay couples of She-Ra are normal in this world. It is as it should be in our world too, and the show gave us five seasons of how it would look. 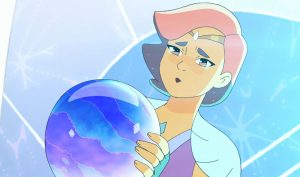 Along with the queer content in She-Ra, so many other thematic, character driven, and narrative moments were handle beautifully. It really took the groundwork from Steven Universe and the storytelling of Gravity Falls to push the boundaries of what can be made into animation. I could honestly write separate articles for each of these points, but I’m going to highlight a few of the best ones.

She-Ra’s handling of abuse, toxic relationships, and war is so well done. This show on its surface is about the Princess Alliance trying to stop the evil Horde. But it really digs into the horrors of war through the eyes of child soldiers. Catra and Adora have been manipulated their entire lives by Shadow Weaver. Glimmer lost her father at a young age and must become a teenage queen when her mother sacrifices herself. Lonnie, Kyle, and Rogelio are good people raised in the propaganda of the Horde to believe their fighting a just cause. Most of the main characters are teenagers forced to grow up way too fast. They were all raised in war time. Every choice they’ve made is because of war. She-Ra shows their mental wounds and how they will never fully be healed by it. Much of the drama is wrapped up in this. 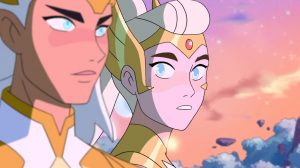 Like how Adora struggles with being She-Ra. She’s given this destiny she didn’t choose. She was raised by villains. Making the difficult choice, she left behind Catra causing a rift with her best friend. She found a new way of life, but there was always a hanging guilt looming over Adora that she wasn’t good enough for her path. Adora’s journey is textbook Impostor Syndrome and learning to overcome it. In one of the most important messages of the series, Mara, who is the previous She-Ra before Adora, tells her, “You’re worth more than what you can give to other people. You deserve love too.” Both Mara and Catra asks what Adora wants. Not She-Ra. Not destiny that has been thrusted on her. What does Adora want? And she chooses Catra. That choice is what saves the world.

Breaking free of bonds and how a healthy support system can save a person is not just a theme for Adora but for other characters too. Season five gave us the best boy with Wrong Hordak. Honestly, thank you She-Ra team for this amazing character who I love so much. 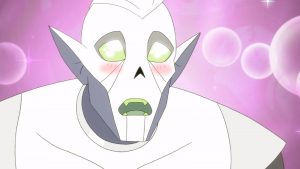 Wrong Hordak is an interesting character. Not because of what he does narratively. He doesn’t actually add much to the overall story. Wrong Hordak is a means for the characters to sneak into places that would normally be barred off to them. That’s his job in the show.

But thematically, he stands for so much more. He’s a foil to Hordak and together they show how escaping indoctrination effects different people. Hordak and Wrong Hordak are clones of Horde Prime. Genetically, they are the same. Their divergent stories are what makes them so compelling. 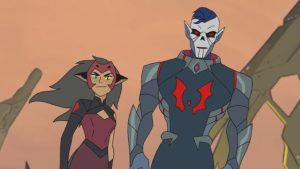 Hordak had a defect and was cast out. He crashed landed alone in another world with nothing by his indoctrination from Horde Prime. With a chronic illness, fear of being abandoned by Prime, and only knowing how he was raised, Hordak became a dictator. He had no support to help guide or soothe him through his trials. He acted on information that was taught to him. Entrapta came in as an outside influence. That was the first time where he was shown any real kindness. It was a paradigm shifting moment that completely changed Hordak’s character. It doesn’t erase his past or his time as a dictator. You can’t wipe a canvas clean once it’s splattered with paint. But Entrapta offered Hordak a new canvas for him to make something different for himself. She gave him a choice. 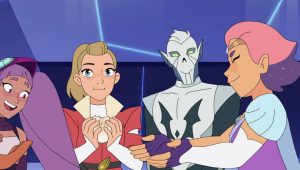 That’s where Wrong Hordak became so important. Thematically, he represents why people need to have healthy support systems in place. Entrapta and Bow save him, owning their mistake of severing him from Horde Prime’s hive mind. They bring him into the group where everyone cares for him. They show him patience, kindness, and teach him freedom to start his own life. Wrong Hordak might not add much to the overall story, but he represents so much more. He could have been a throwaway comedic character, but the She-Ra crew took the time to build a compelling story to give us one of season five’s breakout characters.

Cruelfeline on Tumblr did an excellent breakdown of Hordak and Wrong Hordak that I suggest you read. 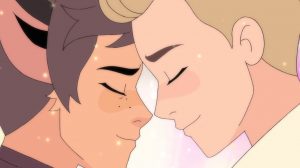 That’s just a few examples of the important work She-Ra did over five seasons. There’s so much more too. Catra’s redemption arc is stellar work. It showcases how redemption actually works in comparison to other franchises (looking at you, Star Wars). We see how to walk away from toxic situations through Scorpia (and then why she shows forgiveness). Shadow Weaver’s sacrifice is a masterclass of selfishness verses selflessness. We see the strength of power that comes from friendship through Perfuma. Bow’s journey tells us it’s okay to be angry and take time to process your thoughts when someone hurts you. Glimmer owns her mistake and does everything in her power to make it right.

And so much more. Honestly, I could probably write an entire novel about why She-Ra is historic.

She-Ra set a new bar for not just animation. Every show and movie that has queer content will be compared to this series. It was the guiding light on how to do queer representation properly. It gave us legitimate and earned redemption arcs. It took on the traumas of war from multiple points of view. It gave every character a chance to grow and shine. It’s tackling of mental health and social structures is revolutionary, building on the shows that came before it.

She-Ra and the Princesses of Power is the new normal. It drew a line in the sand and made several statements about what animation can do. It made a declaration about what all media should do.

And now it’s time for everyone else to catch up.