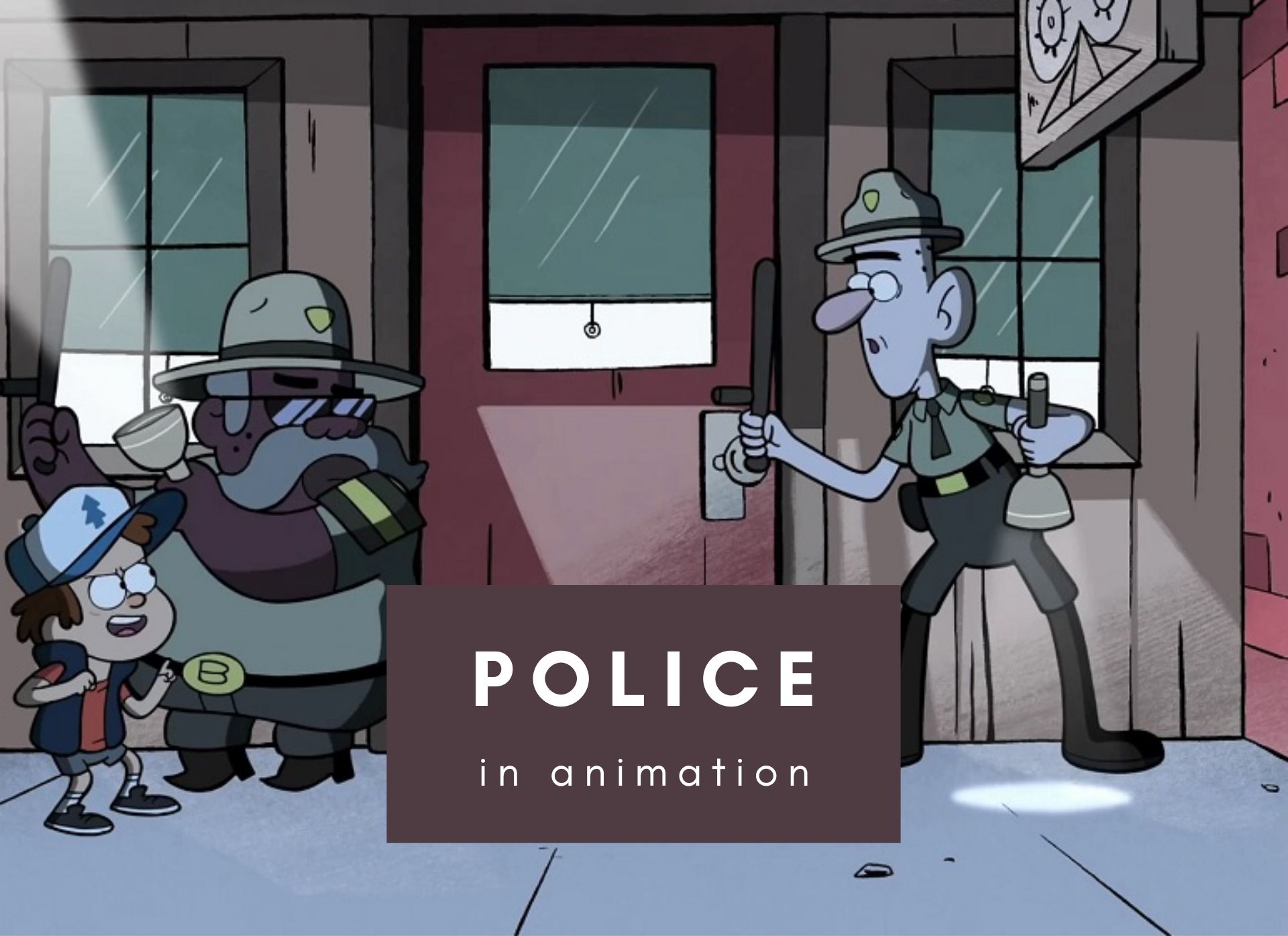 Last night, my co-podcaster, Chris, and I sat down to record another episode of Hope Makes Chris Watch Cartoons podcast. We were talking about the Gravity Falls episode “Irrational Treasure.” The plot of the episode is a spoof on the movie National Treasure. Dipper and Mabel discover a conspiracy about the founder of Gravity Falls. The entire episode they’re trying to escape Sheriff Blubs and Deputy Durland, the two lovable police officers who work in town. The episode was released back in 2012.

I never really thought about Blubs and Durland being anything other than two adorable, fun characters that are a fun poke at police officers. But as Chris and I sat down to record, we started talking about how Blubs and Durland hit us differently this time around. As protests against police brutality spread across the world, it effected our view of these two cartoon characters.

I hadn’t started my normal recorder yet, but my back up Skype recorder caught part of our conversation. The reason it’s cut off at the end is because when I start my main recorder, the backup program I use creates a new recording with it. But here is our conversation that was recorded as we talked before the episode.

There definitely needs to be a discussion of how police officers and law enforcement are portrayed in media. Even in a fantasy setting, soldiers and palace guards are in the power position of modern day police officers. It’s not just about how they’re portrayed in the narrative. We need to also look at what story is being told with these characters. How do heroes and villains interact with them? What is their purpose in media?

I honestly can’t discuss shows like Law and Order, NYPD Blue, Blue Bloods, or anything like that. I don’t watch those shows. Personally, I’ve never been a fan of cop shows in general. They’re not my jam, and they bore me. I do watch Brooklyn 99. While it has addressed in some episodes holding officers accountable like with police commissioner John Kelly and racial storylines like in the episode “Moo Moo,” it’s still not a perfect show. There’s plenty that the 99 characters are allowed to get away with because they are police officers.

I can talk about animation, though, as that is my brand here on the website. Animation has evolved over the years to really change how we see the medium. These stories are formative in a child’s development, able to teach them different topics. Looking at a few examples of police officers, soldiers, guards, and those who keep the system in place, we can look at how various shows present these topics to children.

We see in shows like Avatar: The Last Airbender and Legend of Korra two different kinds of police forces: ones who use brutality to rule with fear and ones who are willing to break ranks to protect citizens. The Fire Nation control their own kingdom with threats against its people. Soldiers enforce that students are in school where they are fed propaganda. The Dai Li hold a totalitarian government in place by removing AKA brainwashing or killing anyone who stands up to them. All of these are portrayed as negative by the main characters and are addressed as part of a bigger systematic problems in the world. When there are good soldiers or officers actually protecting citizens and going against unjust rules, the main characters note them. The heroes help these characters as the officers are doing what’s morally right, not what their government tell them to do such as the case of Lin Beifong and her men. She is constantly breaking ranks to do whatever she can to protect citizens. She sacrifices herself to save others. She stands up to authority figures and demands answers for corruption. And Lin is one of the first to break ranks and fight with Team Avatar against tyrants like Kuvira. General Iroh in Korra is another officer who fights with Team Avatar too.

She-Ra and the Princesses of Power doesn’t have a police force per se. They do have palace guards who help protect the kingdom of Bright Moon. These guards are on the side of the good guys. At no point do they ever attack citizens to keep order. They treat their prisoners kindly and respect them as living people even though they’re the enemy.

The Owl House’s opening episode introduces the character Warden Wrath. His sole purpose it to enforce the Emperor’s rule by imprisoning anyone seen as different. These charges include people who write fanfiction, people who like eating certain things, and people who wish to speak out against the Emperor’s reign. Later we meet Lilith and the Emperor’s Coven, another group in place to keep order. They do this by stripping other witches of their powers to make sure they are not strong enough to rise up against authority figures.

It’s honestly a chilling moment seeing Warden Wrath enter his prison and harm one of his prisoners. Our hero, Luz, immediately understands that this is a bad thing. The laws might say these people broke the rules, but Luz can see these are unjust laws. It’s policing individuality through fear and pain.

Below is that scene for you to see.

In the 2017 run of DuckTales, Officer Cabrera is shown to be both a caring mother and a police officer. As an officer, her first instincts is to protect the people of Duckburg even from the likes of aliens. She clearly loves her son Fenton and is protective of him. When we see her, she’s always making sure people are safe and fighting for them. As Fenton is Gizmoduck, a superhero, he wants to be a hero like his mother.

These are just a few examples. Coming back to Gravity Falls, it’s easy to write it off as a comedy kids show. In the episode “Irrational Treasure” that I mentioned at the top, Blubs and Durland are more than happy to drop their orders to capture Mabel and Dipper. We see them rebuke the idea of harming the kids. But it doesn’t excuse them willing to take the kids away to the government to never be seen again. It made me cringe in the episode “Headhunters” when these two officers are so giddy about using their nightsticks during a police raid. They get really excited about tasing people saying they’re full of power. We can’t even use the excuse that this show aired earlier in 2012 and didn’t date well. Avatar ended a four years prior to Gravity Falls. It’s a choice that was made my the creators that needs to be pointed out.

Trust me. I fucking love Alex Hirsch, his work, his advocacy in queer rights, and his vocal and constant fights with Disney’s censors. He knew children could handle deep and mature storytelling. But they mark was missed with Durland and Blubs. Even joke characters who are simply there for comedy can be harmful. I like to believe that Hirsch has grown and learned from his Gravity Falls days. He is both a voice actor and consultant on The Owl House, which we see the authorities are portrayed differently than Blubs and Durland.

It’s very important to look at animation, because these are the series that are shaping how children view the world. We need to look at how police officers and authority figures are shown in this medium. Also, look at who is writing and telling the stories. The creators behind the scenes are just as important as the narratives being told.

Looking back at last night, it’s a good thing that Gravity Falls made me pause. It made me wonder if what I was watching was good or not. It made me question why Hirsch and his team write these stories. It forced me to analyze whether or not Blubs and Durland were harmful characters. I wondered if I was overthinking things. I asked myself why it made me feel this way.