My Favorite Dads in Animation 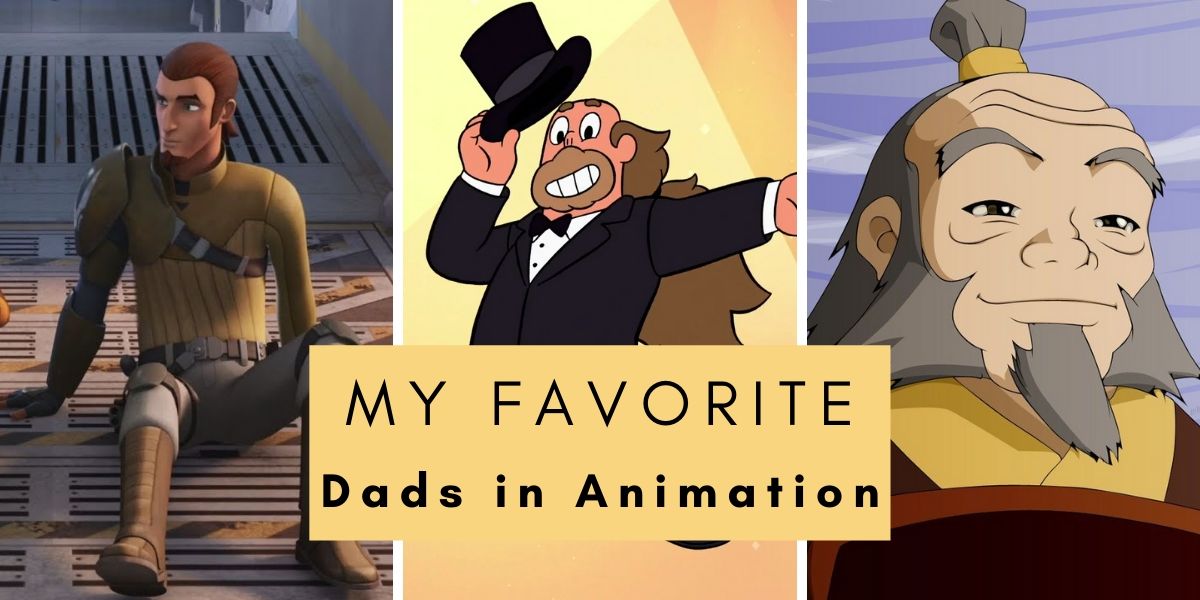 Happy Father’s Day to all you awesome dads and father figures out there (including my own dad and step dad)!

Rarely are fathers the main characters in young adult and kids’ animation. Fathers are usually support systems to the main protagonists. They provide advice and protection. Sometimes they step in if the protagonists are in over their head. And dads usually have the best/worst jokes in a show. Fathers don’t have to be the character’s birth parents to be that role, as you’ll see from a few entries on this list.

Today, I wanted to showcase some of my favorite animated dads. 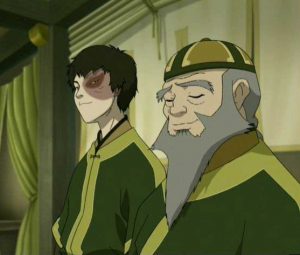 Uncle Iroh is one of the best animated dads of all time.

Zuko would not have succeeded in Avatar without Iroh by his side. After the death of his own son, Iroh took his nephew under his wing. Zuko is naturally a hothead, and Iroh showed him a huge amount of patience. He recognized the good heart in his nephew that Zuko desperately tried to bury. Iroh pulled that kindness from him. He didn’t despair if Zuko backslid into his old habits, because that’s a normal part of being a teenager. Iroh kept things bright and joyful, enjoying the simple things in life. He passed this off to his nephew as we see Zuko use many of Iroh’s lessons to bond with Team Avatar. In the late seasons, Zuko constantly asks himself what his uncle would say or do in certain situations. When Zuko is ashamed to face his uncle after making a terrible choice, Iroh welcomed him back with open arms once Zuko is ready. His love for his nephew has no end.

Speaking of Team Avatar, Iroh even offers advice and mentorship to people who are supposed to be his enemies. He stands with Aang’s group against his own nation multiple times, because it’s the morally right thing to do. Team Avatar come to the understanding that Iroh is a good person which helps build their trust of Zuko.

Iroh even continues his mentorship to the next Avatar being Korra in The Legend of Korra. In the second series, we see Iroh’s impact still resonates with an older Zuko many years later. Iroh is one of the most pivotal characters in the world of Avatar. 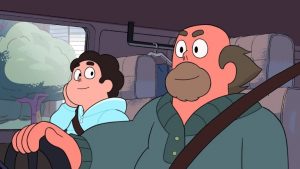 Greg is such a rock in so many ways.

His son Steven is half alien? Steven gets new powers to change his fingers into cats? Steven glows and floats? Steven can fuse with other people to become a bigger person? He’s the heir to the Diamond Authority who are totalitarian dictators that Steven needs to overthrow? Cool, because Greg just rolls with those punches to support his son in whatever he’s going through in the moment.

He’s in no way a perfect father. Steven Universe Future showcased some big missteps in Greg’s parenting. But it’s not below Greg to admit his mistakes. What I love is they allow Greg a space in the show to be massively flawed. Not only does he learn from these mistakes, but he uses them as lessons for Steven. Greg (with the citizens of Beach City) are Steven’s heart and ties to Earth. Part of what keeps Steven so grounded is the love and patience Greg showed him. Greg doesn’t conform to toxic masculinity and he doesn’t push that onto his son. He lets Steven be Steven and only intervenes in Steven is in danger and needs him.

Greg is a lovable goofball who lives in a van and co-parents with Garnet, Amethyst, and Pearl. Together, they round out Steven’s family unit to support him so he can become an amazing young man. 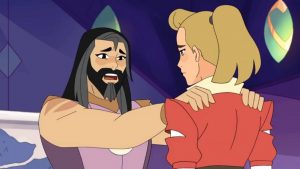 Micah is an interesting entry on this list, because he’s only with his daughter Glimmer for a couple of scenes in the series. Micah was thought to be dead and wasn’t brought back until the end of season four. But from the moment he enters the show, his thoughts are all focused on Glimmer. He never meant to be absent from his daughter’s life. He wants to know if she’s okay and how she has changed. He wants to be the good dad that Glimmer didn’t get the chance to have.

It’s best showcased with his relationship to Frosta, the youngest of the Princesses. Micah tries different ways of being a dad, obsessing on getting it right for when he finally gets to meet his daughter. Frosta repeatedly blows him off, which crushes Micah. It’s not until Frosta points out he’s trying way too hard that Micah feels better. He realizes that it’s okay if he’s just himself, mistakes and all. Micah also becomes a leader and mentor to the other princesses in their fight against the Horde. I do wish we got a few more scenes of Micah and Glimmer together in the She-Ra finale. Though, the work the creators put into Micah give enough insight to the audience that the father-daughter duo will have a strong and healthy relationship. 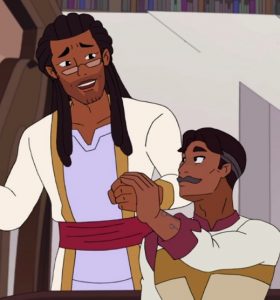 I also have to give a shout out to George and Lance. Bow’s dads are such an adorable couple. They love each other and their son so freaking much! Bow believes his fathers will be mad at him for fighting in the Rebellion and not being a historian like them. George and Lance do get mad at their son. They’re mad because Bow felt the need to hide his true self from them. They love Bow regardless and support him. They even provide vital information for the Rebellion to help defeat Horde Prime. I wish George and Lance were used more, because they are really great characters. As historians, they color in a lot of the mythos of the series. 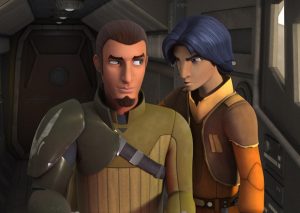 Kanan Jarrus and Hera Syndulla are the best parents in all of Star Wars, and Ezra and Sabine aren’t even their kids.

Raising two teens in wartime while fighting in a Rebellion isn’t easy. As a Jedi that survived Order 66, Kanan struggles with his past traumas and if he’s even good enough to train Ezra as a padawan. But he acknowledges his own insecurities to grow and learn. He trains Ezra to be a Jedi while teaching him the balance of how to use his attachments for good. Kanan shows compassion and love to those around him. He becomes a beacon of hope for many as one of the few Jedi left including his family. Ezra learns this from Kanan to be his own kind of Jedi.  Kanan trusts Sabine’s fighting skills as a Mandalorian, but he won’t hesitate to step in when she gets in over her head. He trains her to fight with the Darksaber and helps her liberate her birth parents and planet. And in the end, Kanan makes the ultimate sacrifice to make sure his family survives.

He does all of this with grace, humor, style, along with plenty of fails and laughs. Kanan is a good father if not the best father in all of Star Wars. 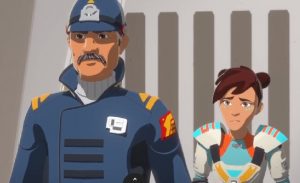 I also want to give a nod to Imanuel Doza in Resistance. Captain Doza frustrated me at times by choosing inaction over fighting the First Order. He came across as untrustworthy and shady being an ex-Imperial. But as the series revealed, he’s not willing to play fast and loose with his daughter’s life or with the protection of the citizens he governs. He learned from his mistakes during his Imperial days. Doza is not willing to repeat those errors again. His daughter, Torra, is his main priority. He struggles with letting her grow in the Resistance and as a pilot. He trusts her skills, but he wants her to be safe. Eventually, he finally opens up and supports her joining the Resistance as a fighter, just like her mother. Captain Doza is a great father, a caring husband, and a protective leader. He might not be the best captain or decisive fighter, but it comes from a place of caring for those he loves.

Loving too much is a very good flaw to have. 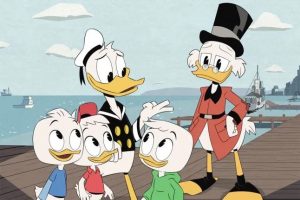 Donald Duck is a damn good father, and I will fight anyone who says otherwise!

When his sister Della was lost in space, Donald took it upon himself to raise his three nephews Huey, Dewey, and Louie. He’s very overprotective of them out of the trauma of losing Della. But this doesn’t keep him from wanting the boys to grow and learn. Once he lets Scrooge back in their lives, Donald realizes that Scrooge can teach the boys how to be safe. Everything Donald does is for the boys even working any random jobs he can get to provide for them.

I think the most telling part about Donald in the new DuckTales series was the episode “What Ever Happened to Donald Duck?!” In this episode, Dewey and Webby discover that Donald sees an anger management counselor. Donald hated being angry all the time when the boys were little. He hated his fear of losing someone else to trigger that anger. So, he sought out professional help to make himself better. He realized a flaw and works to fix it. I say “works” because it’s still there. Donald still hasn’t conquered his anger issues. But he wants to be better for the boys and doesn’t stop trying. Donald as a father to the boys is one of the best parts of DuckTales. 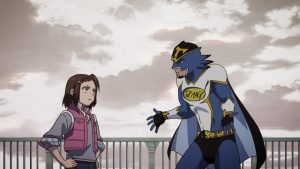 I wanted to keep this list away from anime, because that’s a completely different list of its own. But I am making an exception for Tiger and Bunny, because Kotetsu is awesome.

After the death of his wife, Kotetsu sent his daughter Kaede to live with her grandmother to protect her. That’s because Kotetsu is the veteran superhero Wild Tiger, one of the heroes in charge of protecting Sternbild City. What makes Kotetsu such a compelling father is the choices he has to make. He has an important specialty job that very few people are qualified to do. But this means he has to miss being in his daughter’s life. This this is such a hard choice. Kotetsu goes to great lengths being with Kaede as much as he can. Most of his days off are filled with phone calls, texts, and looking for presents for her. He never stops trying to be active in her life. He wants to be there and to be a great father. Their relationship is rocky especially in the beginning of the show. Kaede doesn’t know her father’s secret identity. Once that’s revealed, she’s a lot more understanding and has pride in her dad.

Kotetsu is also a mentor to the younger heroes he works with. They all write him off as the one with bad dad jokes. But over time, he guides them to be better heroes. Kotetsu helps them see their own self-worth and achieve their personal goals outside of their superhero lives. Laid back, silly, fun, while also being serious about saving lives and being a respected member of the superhero community, Kotetsu is an awesome father and mentor that I love.

Who are some of your favorite dads in animation? Let me know in the comments!