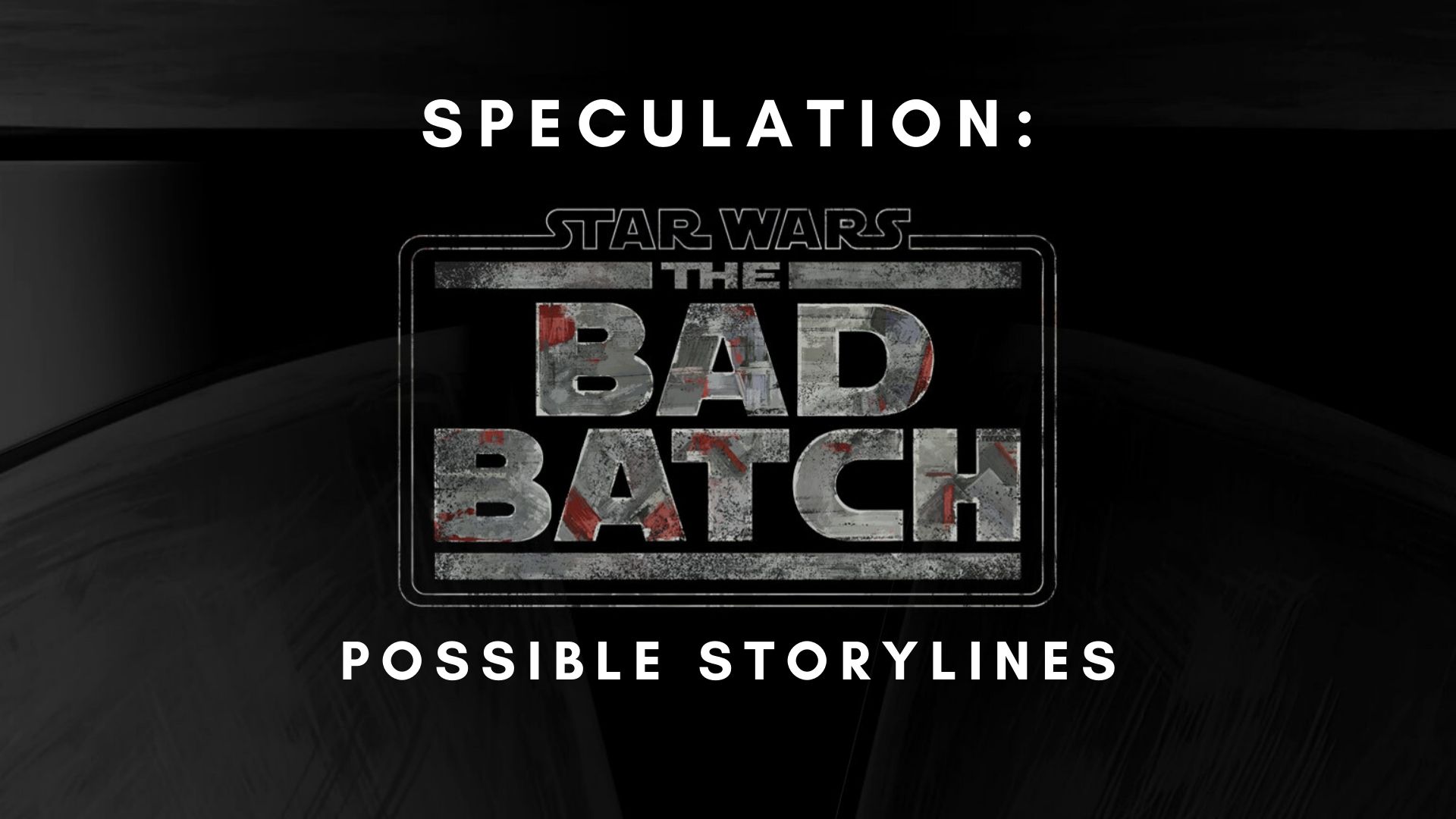 It was announced earlier this week that Star Wars: The Bad Batch is the next animated series from a galaxy far, far away coming to Disney+. While I have some mixed feelings about the series, I’m always excited to have new animated Star Wars content. Clone Wars was my first real love of the franchise. This will always be one of my favorite time periods to explore.

In the press release, StarWars.com provided the premise of the series:

The series follows the elite and experimental clones of the Bad Batch (first introduced in The Clone Wars) as they find their way in a rapidly changing galaxy in the immediate aftermath of the Clone War. Members of Bad Batch — a unique squad of clones who vary genetically from their brothers in the Clone Army — each possess a singular exceptional skill, which makes them extraordinarily effective soldiers and a formidable crew. In the post-Clone War era, they will take on daring mercenary missions as they struggle to stay afloat and find new purpose.

To me, the most interesting thing is the time period. We’ve explored the immediate aftermath of the Clone Wars from the points of view of the Jedi and Sith. We got a little look into the lives of the clones in the Charles Soule’s Darth Vader comic and in Kanan: The Last Padawan. We’ve yet to have a personal story from the eyes of the clones themselves. While I would rather this be the Captain Rex story, the Bad Batch could be a fun group to explore as well.

Let’s play in the realm of “What-If” and speculate about possible storylines for Star Wars: The Bad Batch. 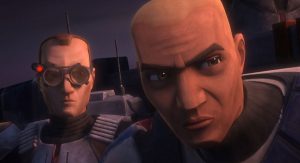 I would love to see the pilot episode of the series start with the Bad Batch working for the Empire. Their inhibitor chips had been switched on. Because the Republic turned into the Empire, they’re now following orders from a new government but same military system. This could be before the Inquisitorius has been put into place. The Bad Batch, being an elite group, could be Jedi hunters at the start of the series. Perhaps it opens with them on the trail of someone like Quinlan Vos, a fan favorite Jedi who we know from other material survived Order 66. This would give us a great look at the inner workings of the Empire in its early day. We could see how the change effected the clones as they transitioned out of the Clone Wars. Commander Cody could be their commanding officer in this time period.

Then about halfway through the pilot episode, that’s when Rex could show up. Rex could be laying low in the Imperial ranks trying to snap his clone brothers out of their Order 66 programming. Or maybe he’s on the run and working to try and hide other Jedi like how he helped Ahsoka. Whatever the case, I would love to see Rex be the inciting incident of the series. He has a history with Echo and previously earned the respect of the Bad Batch. Rex would probably be the only person who could snap them out of their programming and set them straight. Once released from their brain washing, it sets up the story. We know from the premise provided for us that they become mercenaries. I would love to see the pilot episode end this way, with them walking away from the Empire and starting their new lives. 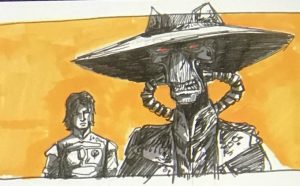 When Clone Wars was originally canceled from Cartoon Network, there were several stories that had been outlined, were in production, or were planned for later seasons. The original Bad Batch story reels had been part of this.

While the new show takes place post-Clone Wars, it would be cool to see some of the unfinished stories get told in some way. Being mercenaries would place the Bad Batch more in the scum and villainy side of Star Wars lore. One unfinished Clone Wars story was about Cad Bane and Boba Fett. In it, Bane takes on a job with Fett under his wing. They have several bounty hunters join them like Aurra Sing, Embo, and Bossk. This could be turned into a story for the Bad Batch. The clones could be the ones who join Bane and Fett and get to witness their showdown that never made it to screen.

In Clone Wars, the Bad Batch was also supposed to have a story set on Kashyyyk. While it wouldn’t be the same plot to liberate the Wookiees from the Separatists, the new show could set one of their episodes there. They could use elements that were supposed to be in Clone Wars, like having them ride on giant ape lizards and delve into the lore of tree spirits.

While we might not get a completion of every Clone Wars story that didn’t get made, it would be cool to see those elements come into the new show. 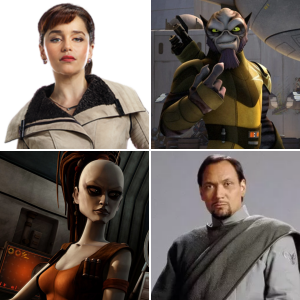 Bad Batch could work really well with the episodic format that Clone Wars thrived in. They could have a “mission of the week” narrative. Each new job would be the episode’s plot as they built a bigger overall story. But through this format, they could really get into this changing time period. We could see so many different sides of the galaxy.

While I fully expect the creators to make new characters, there are so many old favorites that could be featured. Hondo is still a successful pirate leader in this time. There could be a rival mercenary group made up of characters like Aurra Sing, Sugi, Embo, Latts Razzi, or any of the many bounty hunters introduced from Clone Wars.

Depending on how long the show runs for, we could see it bump into the Solo timeline. We know that Maul and Crimson Dawn are running their operations in Clone Wars. The Bad Batch could team up with someone like Qi’ra, who is a character that would be really cool to explore more. Maybe Crimson Dawn gives them a job to take out Enfys Nest‘s Cloud-Riders. That could even open the door to see early Lando with a return of Donald Glover voicing the character.

Maybe the Bad Batch takes jobs for the Empire to target their enemies. There could be episodes where they’re hunting Mon Mothma or Bail Organa, allowing the show to explore the politics of this era. We could see the downfall of Mandalore into its state during Star Wars Rebels. Perhaps the Bad Batch are hired by the Rebellion to get the remaining Lasats to safety after the Siege of Lasan, allowing for a young Zeb story. There could be early Inquisitors, young Hera Syndulla, and villains like Count Vidian coming to power.

There’s so many characters they could bring into this show. The possibilities are endless.

Maybe a Little Bit of Romance 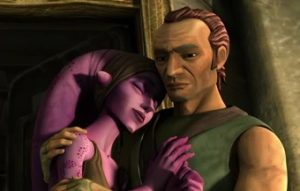 The Bad Batch are free men now. Becoming mercenaries, they don’t have to follow orders anymore. It would be hilarious if they had a few episodes where they tried (and failed and tried again) at romance. I think it could be really cool if one of the Bad Batch members realized he was queer. They could do a great story of his brothers fully supporting him as he explored his sexuality. It could further delve into how different clones were on an individual level. But I will not get my hopes up though, as I’m getting really tired of writing editorials about Star Wars Animation’s failed attempts of writing queer stories in their shows. Still, it could be really fun to have a story where the Bad Batch tried to explore romance for the first time. Maybe Wrecker of all people is the most romantic of the bunch!

There are so many stories to explore through the eyes of the Bad Batch. Perhaps as they grow as individuals, they split up and go their separate ways. They could have varying opinions. It would be devastating if one or more ended up willingly staying with the Empire while the others sided with the Rebellion.

There are so many possibilities of what we could see in Star Wars: The Bad Batch. It’s a ripe time period to harvest for story. This show could go a number of different ways. I’m excited to see what they do with it.

What would you like to see in Star Wars: The Bad Batch? Let me know in the comments below!