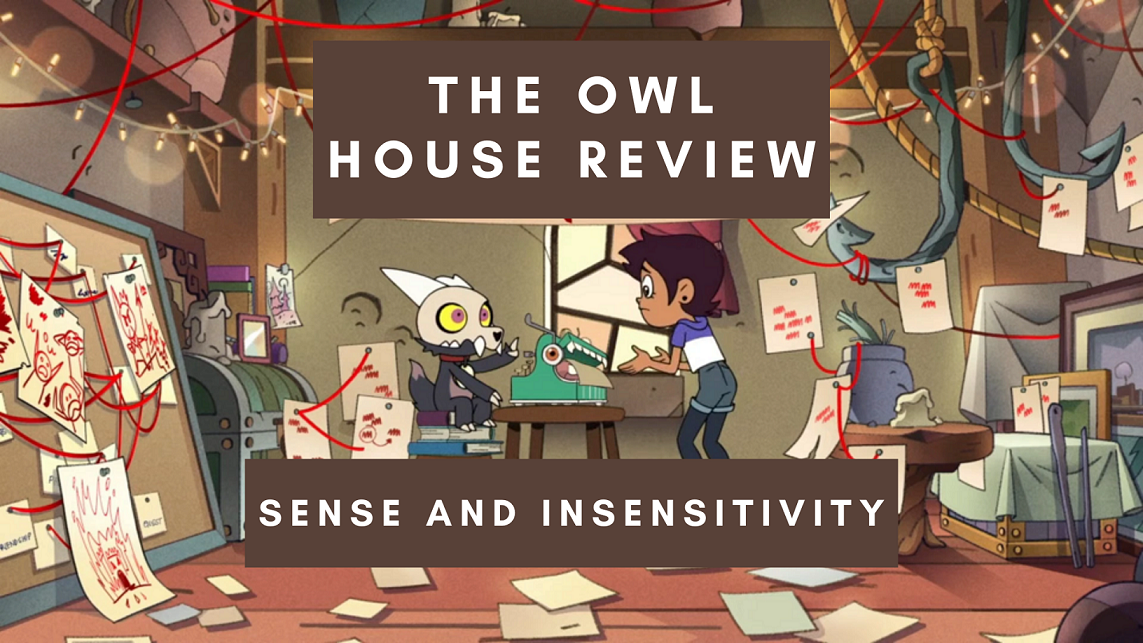 The Owl House is back from hiatus with “Sense and Insensitivity.” I’m excited to write reviews for this series. I came into it a couple months ago and absolutely fell in love with this charming show. While it might seem odd to start writing reviews at the midseason, I wrote up an article reviewing the first half of the show thus far.

Onto the new episode!

King and Luz’s story built on a lot of the great work in the series so far. King normally spews insults at people as casually as someone asking for the time. As a demon, his nature tends to have a cruel side. It’s part of who he is. These moments are usually played for laughs.

The difference in this episode is his cruel remarks are directed at Luz and her talents. This is the first real time it’s pointed at her as a person. Before, King would make remarks based on his lack of understanding humans and their culture. Here, he not only insults Luz’s love of fantasy and romance, but he also takes advantage of her talents. He’s the one who profits off of her work. Furthermore when he tries to invite her to his book signing, King can clearly see how much he has hurt Luz. He’s caught up in his own fame and power, ignoring her pain. It’s a choice that King actively made.

While I expected Luz to forgive King as this is a show for younger audiences, I’m glad that Luz didn’t forgive him right away. King is changing slowly. The excuse of “he’s a demon so it’s okay if he’s mean” is starting not to work for him anymore. It’s because it is an excuse. It’s a front that he uses to get away with his bad behavior. Luz isn’t going to take this conduct especially when it is pointed at her. The creators were very smart to give Luz space and time to be upset. She got to process her feelings. Even more, Luz continued to hold King accountable when he tried to take advantage of her a second time while they were trapped in the crunch time box. It reached the point where “I’m sorry” wasn’t good enough. Those were shallow words at that particular moment. King had to do better. He had to prove through his actions that he wanted forgiveness. Atonement, not shallow apologies, was the important lesson.

I really loved this direction. Part of King’s charm as a character is his chaotic demon energy. He has some of the best one liners in the series. But it’s a very smart move to show that he can’t get away with this kind of behavior all the time. Especially when it’s directed at people he cares about. Even if he’s flippant and joking, King needed to realize his words and actions still have the power to hurt Luz.

It was Eda and Lilith’s story that was far more intriguing to me, though. During their adventure in the B-Plot, I was waiting for a double cross to come from Lilith. It seemed like the entire story was set up to trap Eda. But it never came which was quite surprising to me. I like this reveal. We got to delve more into their sisterhood. Both of them were happy to put aside their differences to aid the other. It’s clear that Eda and Lilith love each other despite their paths in life.

Though, I find it increasingly difficult to read Lilith and her motivations, and I believe that’s on purpose. When she was first introduced in “Convention,” Lilith was set up to be an antagonist. But in every single appearance since then, they’ve softened her by giving us more of her relationship with Eda. They’ve shown she’s even looking for a way to cure Eda of her curse. I don’t believe that Lilith is a bad person by any means. She reminds me a lot of Amity, loving structure and rules. Lilith’s downfall could be her inability to think outside of the box, as we saw in this episode when she was alone in the woods.

Or it could all be a ruse! Lilith could be acting sympathetic! They could be purposely “softening her” for both the viewers and for Eda as a character to set up a surprise betrayal. Lilith still works for the powers in charge. The Emperor and his laws are the antagonists for Eda. As long as she’s with them, Lilith cannot be fully trusted. She’s clearly an incredibly smart woman. She could be playing Eda to break down her defenses.

I mentioned in my previous review that Emperor Belos is more than likely the main villain of the series. I’m sure there’s an underlying indoctrination story line brewing with those in the Emperor’s Coven. Either Lilith doesn’t realize that she’s the Emperor’s pawn or she is stringing Eda along purposely. At some point, there’s going to be a betrayal. It could be Lilith turning on the Emperor or vice versa. Or it could be Lilith backstabbing Eda and her love for her sister. No matter what, it’s going to be heartbreaking to watch. And until this happens, I cannot fully trust Lilith yet.

-There are so many great writer jokes in this episode: The Ghost Writer booth, Save the Cat!, the Dan Harmon story wheel, and so many more.

– “If [the sequel book] is disappointing in any way, I will spend every day of my life trashing it!” As someone who lives in the Star Wars fandom, I felt this line on a deep level after watching the post The Last Jedi and The Rise of Skywalker fallout.

-Steve the Emperor’s Coven Guard is now my new favorite character. That dude cracked me up with his one liners. But he also shows why those guys are so terrifying. They have power and can abuse it so easily. There was so much packed into his 30 seconds on screen.

-“Don’t you dare insult shipping in my presence!” This line is golden!

“Sense and Insensitivity” was a nice return episode for The Owl House. It took a lot of the previous storylines and built on them. With Luz and King, it formed a new boundary that was crossed and mended. For Eda and Lilith, we saw more of their bond from the past showcased by the women they are now. It was a nice return to form for the show. I know the next episode “Adventures in the Elements” was released early for international viewers. Here’s hoping I can stay away from spoilers for one more week!

Also, I made a few Owl House items on my Etsy store. It would be cool if you checked them out.

See you next time!