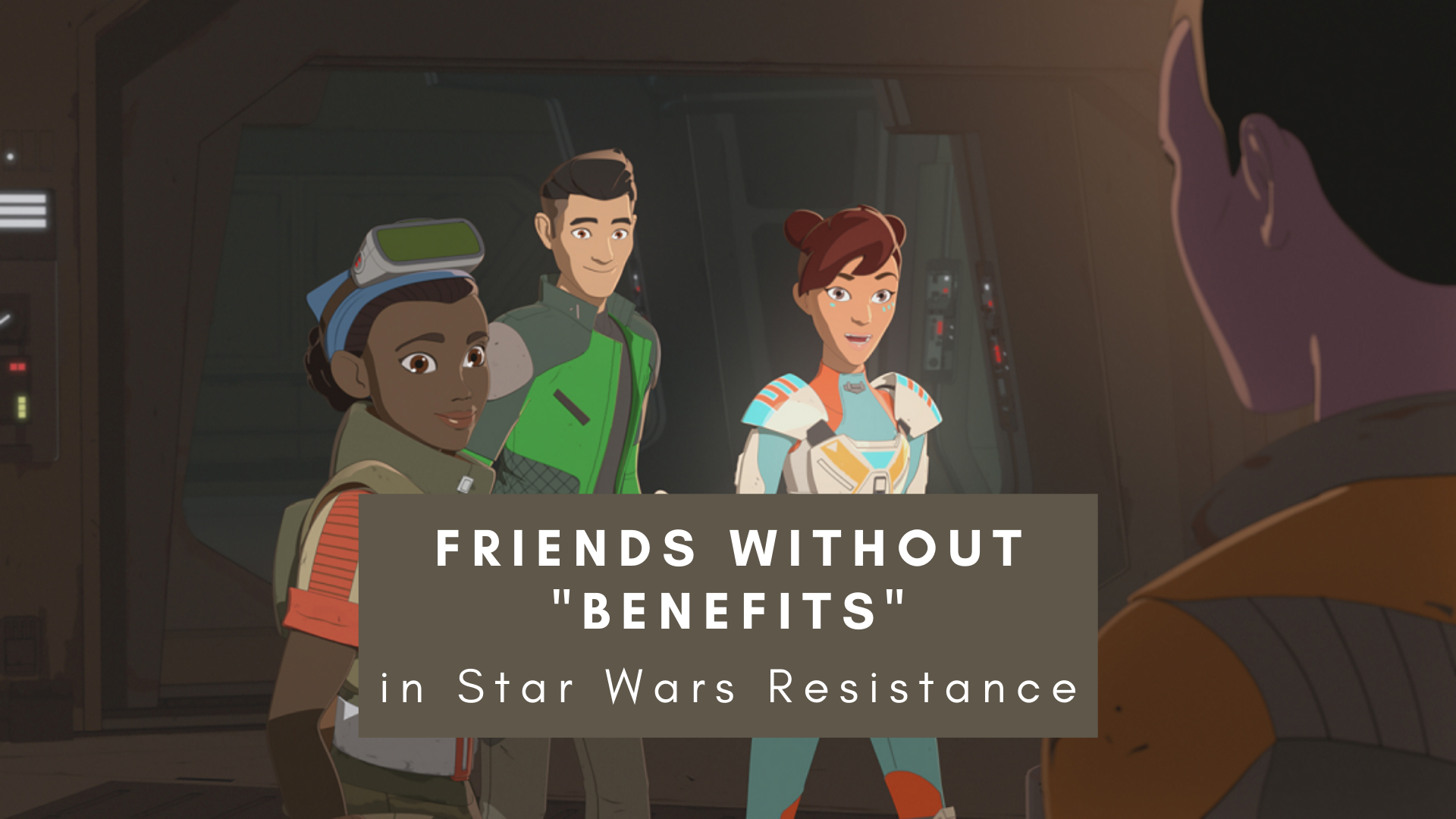 I think one of the reasons I’m constantly drawn to animation probably comes from me being on the Asexual spectrum. While I do enjoy reading adult material, watching shows, and movies, I often find myself having trouble relating to it when it comes to the sexy time scenes or romantic pairings. When I do find ships I love, it takes a lot of work for me to read more intimate fanfics. I prefer stories that are fluffy or slice of life.

I also prefer stories that explore friendships especially when it comes to opposite sexes. In adult media when you have a man and a woman as lead characters, they’re probably going to sex it up at some point. It’s almost always happens in television and movies, and usually my Ace brain takes me out of the story as a viewer. Game of Thrones was a trip for me and difficult to watch at times.

But when opposite sex couples don’t end up as romantic partners, it’s surprising and refreshing storytelling. Very few adult shows explore friendships of opposite sex characters where sex is never ever an option. Once Upon A Time in Wonderland and Elementary are good examples of showcasing these relationships where characters are best friends, build trust, and support each other. Male-Female-Non-Binary relationships are incredibly important and need to be told in healthy ways. Friendships with all genders and sexes help grows one’s perspective of society. It grows empathy and care for those different from you. It’s a necessary social skill.

Romances can easily derail a character’s development. It’s one thing if the show is specifically about dating and relationships. Romance is normal for teen shows and sitcoms. But when it’s a genre like a space opera like in Star Wars, an introduced romance can easily wreck a series when it’s not written properly.

Which is why I love animation so much. Since animation tends to skew towards younger audiences, male, female, and non-binary characters usually don’t have huge romantic arcs. There are often crushes along the way for “first young love” narratives. But the focus is on healthy friendships and how to form them. A good example is Steven Universe with Steven and Connie. It’s clear that Steven and Connie care for each other, and later in the sequel series, it’s romantic feelings. But it’s a romance that is earned from five seasons, a movie, and a sequel series worth of work. Connie and Steven are together because their friendship and trust was built up first. Their relationship never has that feeling of, “he’s the main guy and she’s the main girl so therefore they’re together” unlike how much of adult media writes these kinds of stories.

“I think everyone’s knee jerk reaction is to ship the two. Because the two are similar in age that there’s some type of gravity between them romantically. I think it’s very strong at this point to show boys and girls being friends and supportive of one another… [Ezra and Sabine] is not something that had to be romantically dimensional.”

While I love Ezra and Sabine as individual characters, I truly struggle through Ezra’s crush on her early in the show. It rips me out of those episodes at times even when I watch it today. Relationships are earned, not forced just because you have two protagonists in the same room. I’m glad they never wrote them romantically, especially in the early seasons. By the end of Rebels, I would be okay if they ended up a couple. Ezra and Sabine had four seasons to develop their lives together to reach that point. Like Steven and Connie, a romance would be earned as it was built on a strong friendship. 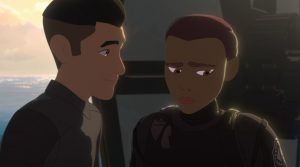 This quote from Filoni applies to one of the things I love about Star Wars Resistance. At no point in the series did I ever feel like Kaz was going to be romantically involved with any of the women in the show. This was such a relief to me. I really didn’t want another teen crush storyline like we saw in Rebels. Especially now that we know the series was always supposed to be two seasons, any romantic storyline would have taken away from the overall, quickly moving plot.

Let’s look at Kaz with Tam, Torra, and Synara.

Tam and Torra are developed as both peers and mentors to Kaz. Tam, along with Neeku, is the one who shows him the ropes in Yeager’s shop. While she often questions his credentials and skills, she shows pride when he succeeds. Torra is usually Kaz’s go between when it comes to the Aces. She’s a strong voice of reason, showing maturity well beyond her age. Kaz often seeks out Torra’s advice on things despite her being several years younger than him. Both of these women become very important people to Kaz. With Torra’s family having a rebel background and Tam’s knowledge of mechanics, Kaz is open to learning from them. 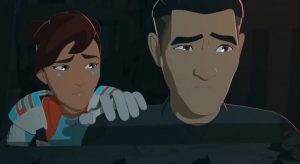 And once Tam leaves for the First Order, Kaz works so hard to get her back. Torra is his support when he loses his homeworld. And it’s Kaz that works hard to earn both of their their trust. He has to prove his skills to Torra for her to voice her support to the Aces and Captain Doza. And it’s Kaz that has to rebuild trust with Tam when it was his spy story that ostracized her in the first place. Everyone works to have these friendships. They all become very important people in each other’s lives. None of it is ever for romantic gain. Torra and Kaz have a very healthy friendship. Kaz works to fix his mistakes in Tam’s life. It’s all to better each other. They are key factors in each other’s growths.

Synara and Kaz are the Ezra and Sabine of Resistance to me. It’s clear that Kaz has a big old crush on Synara from the moment he meets her. He shirks his work and makes excuses to go see her. It could have easily been the shoehorned in romance of the series. But what makes their friendship so great is Kaz and his choices. He catches on that Synara is not interested in any kind of romance. Granted, Synara is on a secret pirate spy mission of her own. With her upbringing, she has trust issues as big as the Colossus. She doesn’t really know what it’s like to have meaningful friends. 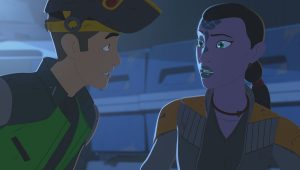 He doesn’t press her for a romance. He doesn’t bash her for not returning his feelings. He doesn’t make it about him and his hurt romantic pride. Kaz becomes Synara’s support system. He’s patient as she’s learns how to have friendship style relationships for the first time. He, along with others like Tam and Torra, present Synara with a better way of life. In season two when she’s spending a lot of time with her pirate family, he doesn’t put her down like, “But they’re mean and bad! Why are you still here? You should stop!” He presents to her healthier options to choose from. When it comes to Synara and Kaz’s relationship, he gives her all of the agency of how to proceed. I think if Synara had chosen to leave with the pirates, Kaz would have respected her choice to go.

This is such an important lesson especially for younger viewers. It would have been so easy (and terrible) to write Kaz being angry that Synara turned down his advances. It’s such a toxic and common trope in media where men blame women when they’re not interested in romance. Pop culture has a long history of writing the lovable “Nice Guy” wearing down the not interested woman until he wins her over.

They completely stay away from this trope in Resistance instead growing Kaz and Synara’s friendship. He becomes someone she can rely on as she tests new waters. Being raised by pirates, Synara really has no concept of a healthy friendship. Kaz gives her the space to try these new things. She grows as a person through his support. And in return, she becomes one of his best allies on the Colossus. She aids him in several missions in season two when fighting the First Order. Her skills are essential when it comes to stopping the bounty hunter Ax Tagrin and saving their lives. Synara and Kaz make each better people through their friendship. And like with Connie and Steven if these two end up romantically together at a later date, it’s earned from building a healthy, trusting friendship first.

Resistance was so good at building male-female friendships that are healthy, supportive, and well written. It’s one of the best parts of the show. I only wish that the series had more than two seasons so we could have seen these relationships continue to grow.

What are some of your favorite relationships in the series? Let me know in the comments. And on August 29th, make sure to share your love for the series with Remembering Resistance Day!