Star Wars Resistance and the Missteps of Kaz’s Trauma 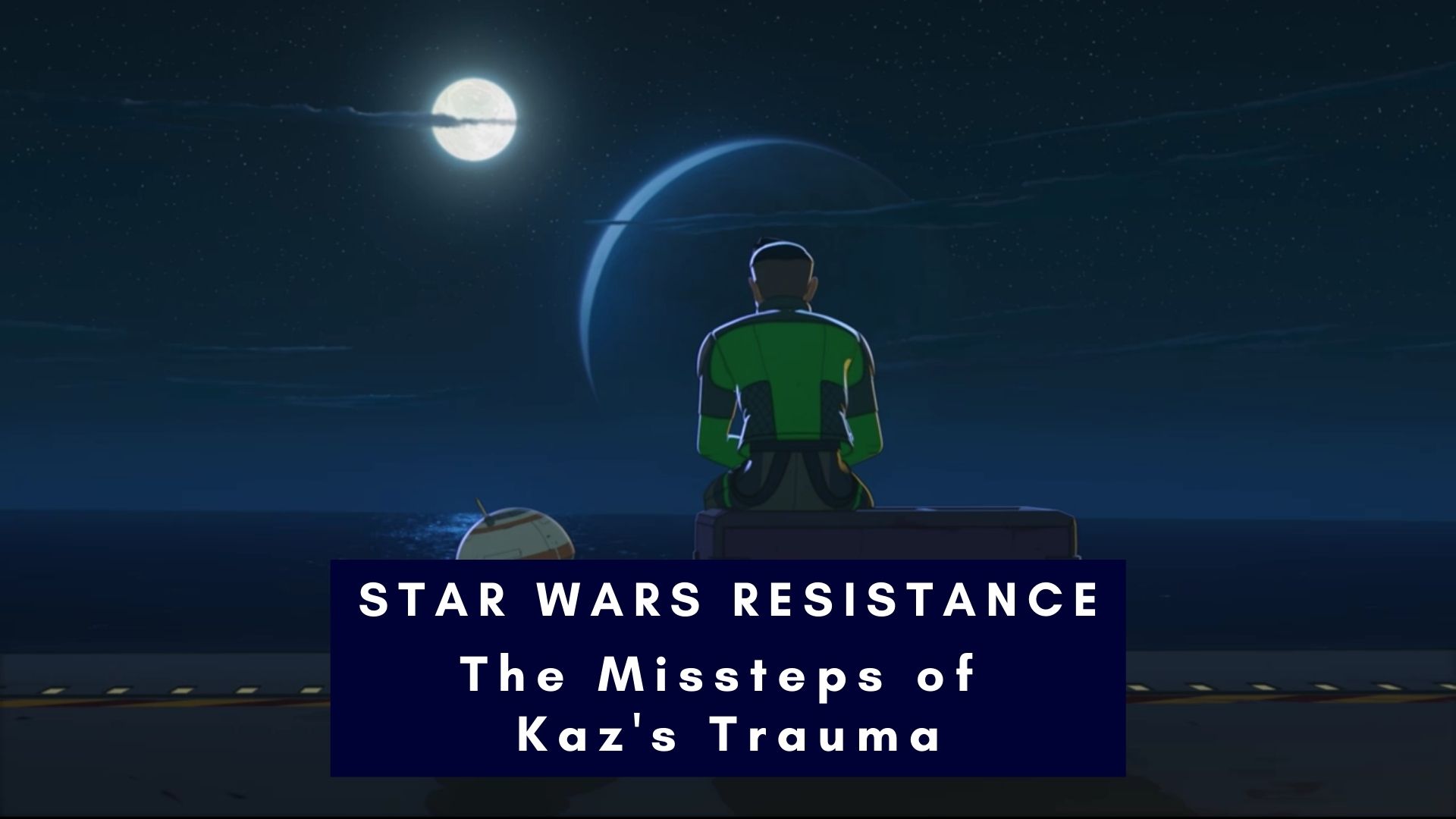 While I love Star Wars Resistance, it’s not a perfect show. There are several things they completely missed the mark on. They didn’t write good queer content. Characters like Bo and Freya had no development. They introduced storylines in season two that never had time to fully develop. But probably the one narrative I think they absolutely flubbed the most was Kaz and his mental trauma after the destruction of Hosnian Prime.

I will totally admit some of this is coming from a personal Star Wars gripe that I’ve had for years. I understand that when A New Hope was created, there was not a focus on having thoughtful mental health discussions in media. There was no time for Leia to process the loss of her family and home world on Alderaan. Also, Leia’s trauma has been addressed in other forms such as comics and books. Personally, it’s something I’ve always wanted to see on screen. 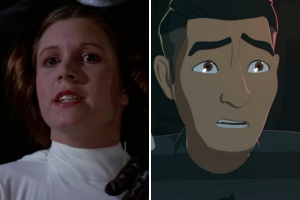 Which is where Resistance had the chance to do something profound. While it’s not Leia’s story, it could have been a similar take. We could imply it back onto what Leia probably went through herself. We could have seen Leia’s story through Kaz’s eyes.

In Star Wars Resistance at the emotional height of the series, Kaz’s home world of Hosnian Prime is destroyed by Starkiller Base pretty much the same way that Alderaan was obliterated. We see this have an emotional toll on Kaz right away. The war has not only come to his second home on the Colossus, but it has taken away his childhood home as well.

Kaz is an interesting character in the Star Wars universe. As a senator’s son, he comes from a place of privilege which is different from most of our protagonists. He’s similar to Leia in these ways as she was a princess. His entire character arc in season one is learning how to function with normal people and live in a Blue Collar world. But unlike Leia who was raised by the leaders of the Rebellion who helped organize a civil war, Kaz was raised in peace time with no conflict. He went to the military academy, but he doesn’t have a real concept of what fighting in the Resistance actually means. He acts like it’s a cool social club to join.

When Hosnian Prime was destroyed, it was a defining moment for him. He had no idea if his family was alive. In “Into the Unknown,” Kaz is almost manic as he’s trying to fix the Colossus. He’s doing everything in his power to keep his mind off of what he’s lost to the point of lashing out at Torra and Neeku. Everyone is understandably patient with him, as Kaz is processing the unimaginable. It’s incredibly good writing showing how huge amounts of trauma can really effect a person. Kaz is not Leia. He wasn’t raised to be a spy or rebel fighter. He’s just some kid who wanted to get away from home, be a hero, and be a pilot. The war suddenly became very real to him. It forced Kaz to mature very fast. 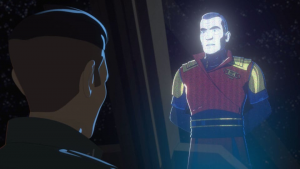 Then, this amazing writing delving into Kaz’s mental health was all dropped in “A Quick Salvage Run.” Kaz is contacted by his father, Hamato. It turns out that everyone in his family was okay and off world when Hosnian Prime was destroyed. And like magic, Kaz is suddenly back to normal. He barely mentions his home world for the rest of the show. He returns to his bright happy personality like nothing ever happened.

This is where I find myself really disappointed in Star Wars Resistance. They had the chance to write an incredibly profound story with Kaz. Even though his family was okay, he still suffered a great loss. He probably lost several friends, his childhood home, school, and places he hung out as a kid in an instant. For the rest of the series, Hosnian Prime should have been Kaz’s rallying point. It should have been his motivation to recruit people. It should have been his emotional touchstone he constantly returned to.

They could have written an incredible story of mental health. Maybe there are times where Kaz was hesitant, having flashbacks to watching his planet get destroyed. They could have written him overly protective of Torra, Neeku, or Synara, because he was afraid to lose anything else. Hosnian Prime could have been written into his story trying to get Tam back. Not knowing if she was okay could be a point of anxiety for him. I’m not saying they couldn’t write Kaz happy and goofy, but it would have been amazing to see him have those triggering points that flung him back into his trauma. Instead of magically fixing Kaz the moment he saw his dad, they could have created a thoughtful story about how hard it is to be happy again. It could also be about how it’s okay to be upset over huge losses. 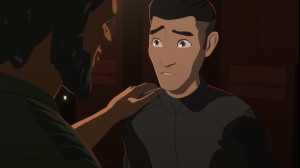 I don’t think that’s asking too much either. We’ve seen Star Wars animation cover trauma before and write it well. We see characters like Ahsoka, Kanan, Rex, and Ezra struggle with PTSD. During the Geonosis arc in Clone Wars, Ahsoka flat out tells Barriss she has trouble with silence. They discuss how they’re pretty much child soldiers in a war they were thrown into. In Star Wars Rebels, most of Kanan’s season one arc revolves around his loss of the Jedi. He’s scared to train Ezra for a variety of reasons, but one of his fears is the Grand Inquisitor. Kanan doesn’t want to lose Ezra like he lost the Jedi. Rex also struggles in the world of Rebels to the point of screaming out Cody’s name when having flashback to the Clone Wars. The death of Ezra’s parents is a weight on him for the entire series. Ezra learned how to move on and fight, using his parents as his personal strength even though they are gone. At no point do any of these stories take away from the lighter side of animation. Clone Wars and Rebels are still full of humor while discussing mental health in a way that kids can understand it.

I do not think it’s too much to ask for the same kind of storytelling with Kaz. It would have been a great analysis of his psyche. Imagine a scene where Kaz is smiling and trying to be normal. Then, Neeku points out that it’s forced happiness. So they talk about it as friends. Or maybe Kaz pushes himself to his mental and emotional limits. Part of overcoming trauma is knowing when to ask for help. He could turn to his mentors of Yeager and Captain Doza, both who were alive during the destruction of Alderaan. Those could have been some healthy conversations rivaling Steven Universe for its content. It would have been a real first in Star Wars as very little of this franchise focuses on mental health. 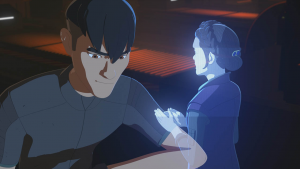 But most of all, I wish Kaz had one more conversation with Leia. More than anyone else in the galaxy, she would understand his pain. She would know his feelings and emotions. They could have had such a beautiful conversation. Then for the first time on screen, we could have watched as Leia explained her feelings on what happened to Alderaan. It wouldn’t be in a book or a comic. It would be on screen for children to see that our strong, amazing princess also realized it was okay to be upset. It was okay to be angry and sad. That it might have temporarily paralyzed her and still hurts her today. But Leia found strength to keep going even through her pain. She could pass that wisdom not only to Kaz but to any audience member who suffered great loss.

The destruction of Hosnian Prime should have never been a quick fix for Kaz in Star Wars Resistance. It should have been something he lived with for the rest of the series. It should have been his driving point. The creators truly missed the chance to write such a profound, beautiful story about mental health. They could have really helped Kaz grow into an even stronger character.

Kaz does have a good character arc, but it could have been so, so much better.