The Owl House Review: Agony of a Witch 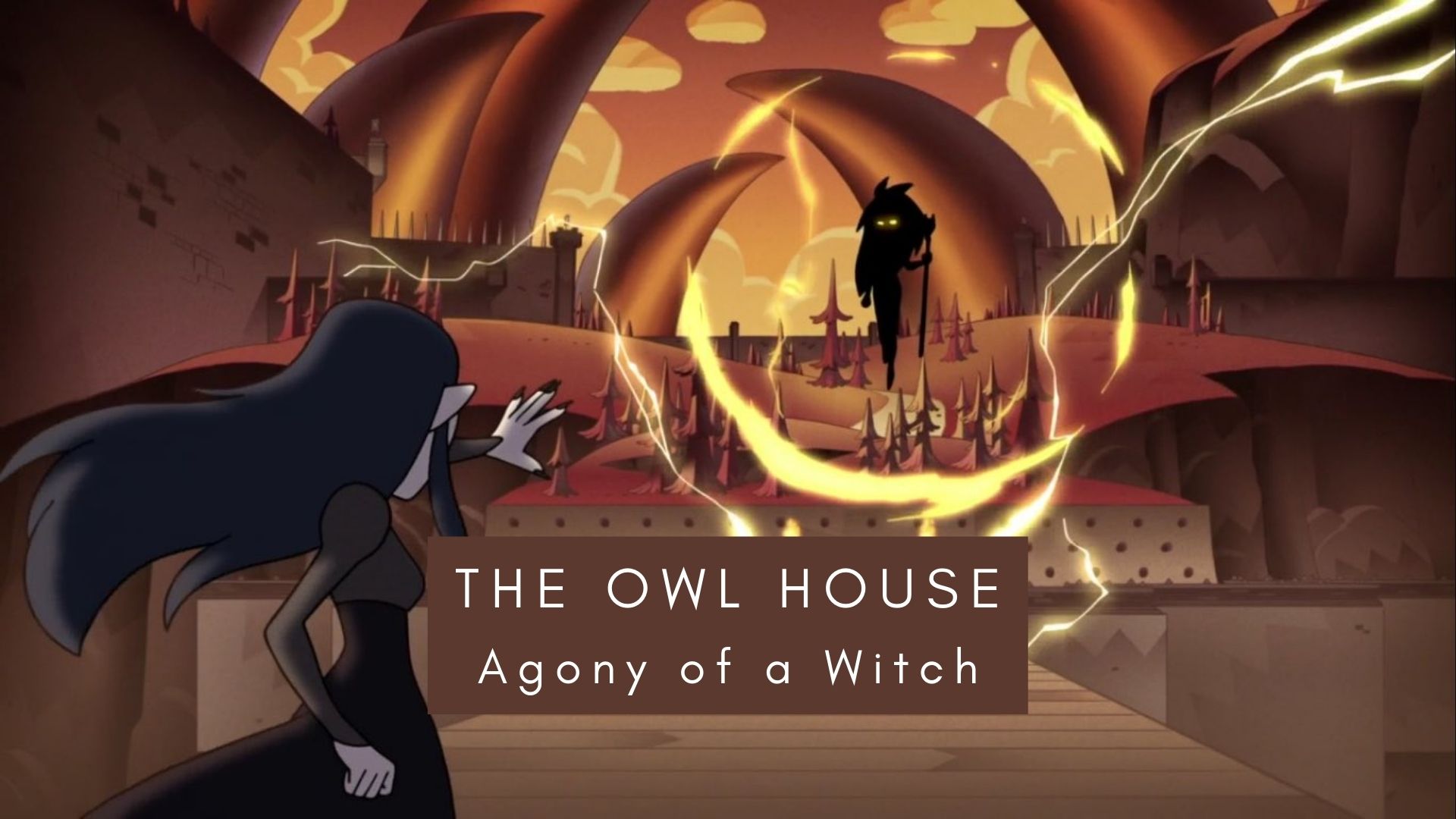 I don’t even know where to begin with the newest episode of The Owl House. “Agony of a Witch” was running on all cylinders this week. The animation was flawless, especially during Eda and Lilith’s witches duel. The story and reveal of Eda’s past broke my heart. But it also made me cheer, because anyone who knows me knows that I love a good villain. This week, we got two baddies with Lilith and Emperor Belos. The voice acting was heart wrenching. Sarah-Nicole Robles and Wendie Malick really flexed their acting muscles as Luz and Eda. The penultimate episode of the season did not disappoint! 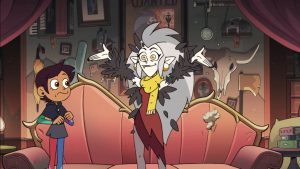 This is the episode I’ve waited for in the last half season. I’m happy to eat my own criticisms from the last few weeks about the lack of Eda’s curse storyline. It turns out this choice was both plot and character driven as Eda has been hiding how bad her curse is from Luz and King. Characters withholding information for later reveals has become an interesting form of storytelling that I’ve seen recently in animated shows. They did a similar story with the character of Tam in the first season of Star Wars Resistance. It can be frustrating going week to week as a viewer, because I felt there was an unevenness between Eda and Luz’s stories in The Owl House. Though when it has purpose as a character motive, it makes for a great reveal.

I don’t think this tactic works as well if someone was binging the series. They wouldn’t have the time between episodes to stew on the lack of focus on Eda’s curse. But for someone who is waiting seven days between episodes, this is a good way to build suspense.

Also ever since they revealed Eda’s curse, I always thought it was a great allegory about mental health. Her line about how managing it daily with the proper elixir and rest (read as: medication and therapy) has always stuck with me. It needs to be a blog for another time, perhaps after the finale. But I do think there is a bigger conversation to be had about Eda’s curse paralleling mental health. 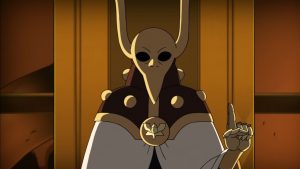 Like I said, I love a good villain, and The Owl House gave us two this week. Emperor Belos is as terrifying as I hoped he would be. He’s clearly a tyrant who is very skilled with propaganda. We see that his indoctrinating tactics are successful. Just look at Willow and Amity. We know they’re both incredibly smart young women who are skilled witches. But Amity’s dream is to be in the Emperor’s Coven. In this episode, Willow is spouting how awesome the Emperor is and how he saved the Boiling Isles.

This is horrific, and it’s good that Luz is not falling for it. She’s lucky to have Eda as her guide to teach her better ways. Luz is starting to recognize that Belos rules through false information and fear. From episode one to now, we’ve seen him remove anyone who stands in his way. Which is why Eda is such a huge threat to him. Luz and Eda’s influences on the world is breaking down the system that Belos has built. We saw this with Luz getting Principal Bump to change the school rules. We see this with Eda’s interactions with the rest of the world. Belos has noticed, and he needs to stop any dissent to keep his power. 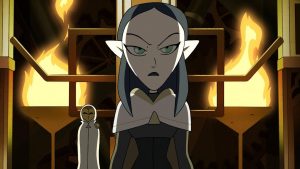 This brings us to Lilith. I want to also praise Cissy Jones acting the crap out of this character. Where Lilith was so sure and confident at the beginning of the season, Jones has brought out her desperation the last few weeks. She shows how multifaceted a woman like Lilith is. Lilith loves her status and believes in what she’s doing while still deeply caring for her sister. Cissy Jones showcases that in each episode. I really hope to see Jones and Malick up for voice acting Emmy nominations in 2021, because they both highly deserve it.

Speaking of Lilith being a multifaceted woman, we got the reveal that she was the one who cursed Eda. I know everyone is suddenly cancelling Lilith online, but to me, this is probably the best thing to happen to her character. Lilith is such a complicated villain. We have to point to two huge factors in her upbringing. One, she was raised in a world of propaganda, the same dangerous teachings that Willow and Amity are following. Two, we don’t know her motivation of why she cursed Eda.

Lilith truly believes in Emperor Belos and his order. It’s clear she’s bought into his propaganda. While we don’t know how witches age in this magical realm, I do think it’s safe to assume they were children right around the time or slightly after Belos made the Coven System. She would have been one of the first students to hear about this new magic system that was “good” and “for the best of everyone.” If that is her only exposure to knowledge in school and she doesn’t have any outside influences other than her rebellious little sister, then she doesn’t know any better. Of course, this doesn’t make it okay, because she always has a choice. She chose to believe false knowledge that was taught to her. She didn’t try other methods of learning. But as a child, we don’t usually question authority until we get older. Again, look at Willow, Gus, and Amity who believe in the Emperor’s message. 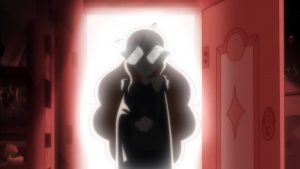 We’ve seen throughout the season that Lilith’s motivation is love. I mentioned last week that at any point in the series, Lilith had the power and resources to storm Eda’s house with an army. She chose to do it out of desperation this week. And of course, Hooty decimated her troops. But because of her love, Lilith wanted to give Eda a choice up until this episode.

Which brings us to the Why. Why would Lilith curse her little sister? I honestly think it was a last resort move. She would always have the curse in her back pocket to fall back on. I think she honestly believes that Eda would have a better life in the Emperor’s Coven. Love can make us do incredibly stupid things. Using the curse as a last resort, Lilith can exhaust all her means to give Eda the choice in joining the Coven. But when it came down to it, the curse would eventually force Eda to join regardless. Lilith can easily bring in the Owl Beast. None of this is okay. It seems like Lilith doesn’t realize how much she has weaponized her love against her sister.

And I could be wrong. It could have been a move out of jealousy and sibling rivalry. It’s going to be interesting to see what comes from it. 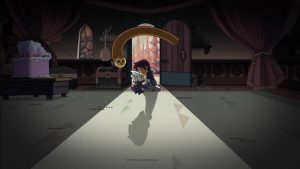 Going into The Owl House finale next week, I’m excited to see Luz come into her own. She’s been learning the ways of wild magic. She’s recognizing the powers in charge are not the good guys. It’s time to gather her allies. Also, Willow and Gus saw firsthand what the Emperor and his coven are like. I think Amity will be the hardest one to convince to join them. Unlike Willow and Gus, she hasn’t seen the true side of the Emperor and Lilith. I sort of want that to be a conflict between Luz and Amity. Not in a way to break them apart but to use it as a tool to help Amity grow even more. I don’t want there to be that much resolution in the finale. Instead, I hope it’s all cliff hanging set up for season two. 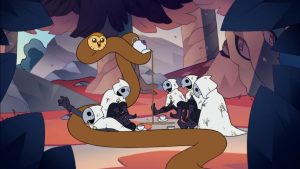 -All you Hooty haters get out of there! Hooty is one of the best characters on the show! Last week, I talked about how I wanted to see more of his abilities. We got to see what a freaking powerhouse he is. That opening sequence with him destroying Lilith’s troops and then having a tea party with them was THE BEST! I wonder if we will have a return to “Hooty’s Moving Hassel” in the finale. If they can move Hooty to the fight, he would be a powerful ally for Luz.

-I am so scared for Owlbert! Emperor Belos eats palismans, and Owlbert is captured by Belos! Please don’t eat Owlbert!

-That witches duel! They really outdid themselves with that animation.

-I’m interested to see how they develop Kikimora. As the Emperor’s right hand, she probably has a ton of power herself. They could take her in a lot of different directions. This show pulls so much from Harry Potter that she could be the stand in character for so many of Voldemort’s henchmen. Is she a Severus Snape or a Lucius Malfoy? Is she more of a lackey like Professor Quirrell? Or will they take her more of a Lord of the Rings route? Kikimora could be a Gríma Wormtongue figure who is the true puppet master behind the Emperor. There’s so many possibilities with her character that I want them to delve into season two. 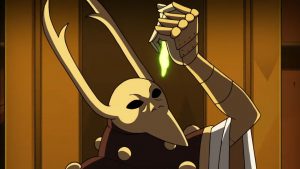 -I’m going to do some speculation. My theory is that Belos is the personified version of the Titan that the Boiling Isle is built on top of. They gave him religious iconography in stain glass windows like he was a God, and Willow talked about how he saved them all. It’s why he’s omniscient to the point of being able to see Luz, Willow, and Gus stealing his artifacts. It’s also the reason the heart in the throne room beats faster when he became angry. The reason he made the Coven System is because the wild witches were taking too much of his power. He wanted to stop and control them to keep them from weakening him. But to hold that form, he has to consume the power of the witches through their palismans.

I think the Bat Queen is also somehow involved as well. She said she used to be on the staff of a giant. Perhaps she was Belos’ palisman when he was a titan. Maybe she escaped when he broke her off his staff to consume her. It also adds so much context why she’s allies with Eda, knowing that she rebels against Belos. I think Bat Queen is going to be a key ally for Luz too.

We’ll see if my theory is right!

Guys, I’m not prepared for next week. I have a feeling that The Owl House is going to destroy us with feelings and leave us on a huge cliffhanger. I can already tell that season two will not get here fast enough.

What were your thoughts on “Agony of a Witch?” Leave me a comment and let me know!