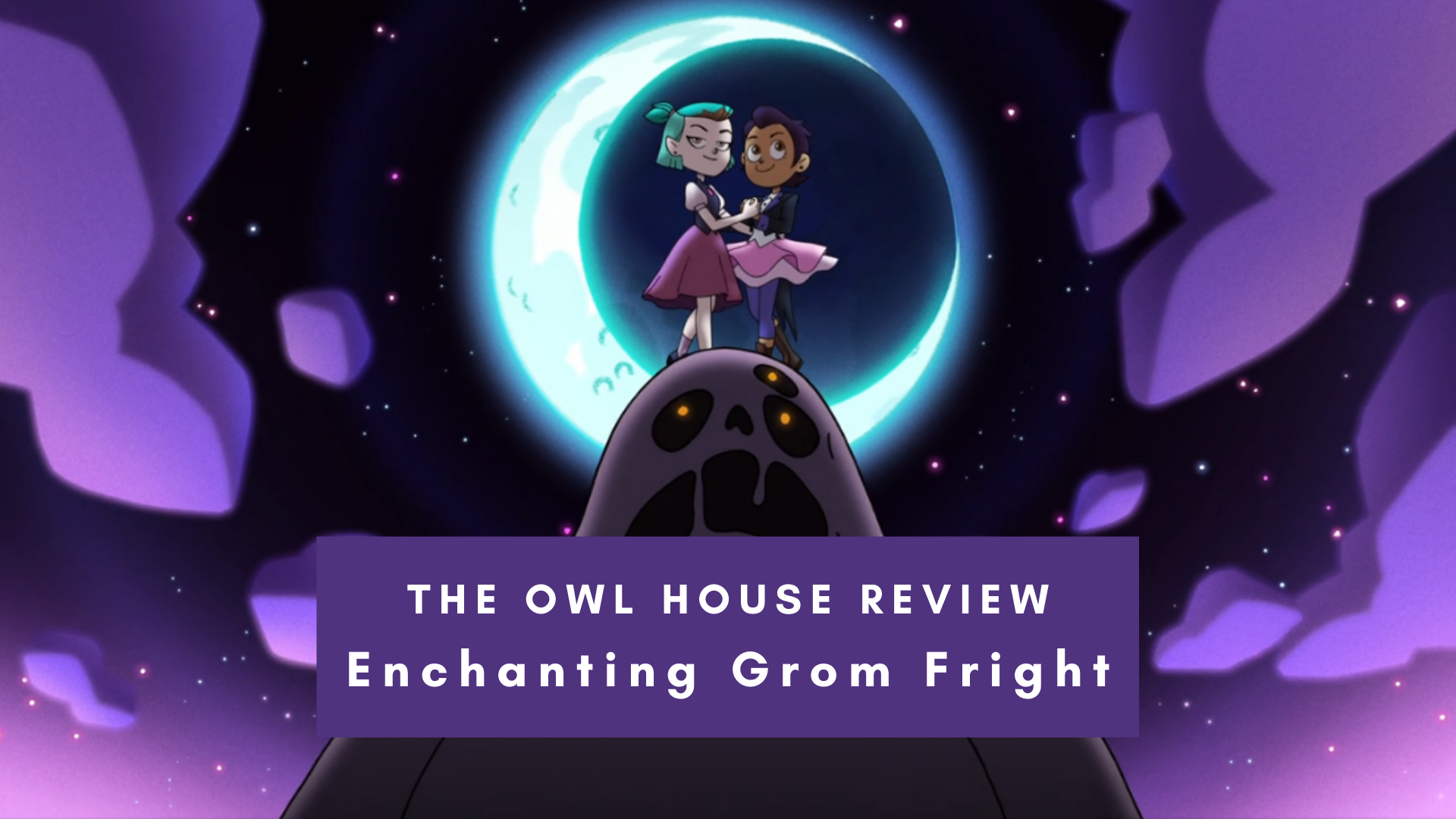 The Owl House episode “Enchanting Grom Fright” feels like it took me a lifetime to get to this moment.

Growing up, I remember watching Sailor Moon and seeing Sailor Uranus for the first time. I was immediately drawn to Haruka wearing slacks and blazers. I was a tomboy who thought, “Wow! A lady that dresses like me!” I immediately loved her. They introduced Michiru, Sailor Neptune, along side of her. They were almost always together on screen. Fingers laced as they held hands. They were constantly touching. And the horrible dubbing told me that they were “cousins.” Which was really strange. Cartoon Network’s censors chose to leave in a lot of their flirting scenes in the early dub. I knew that couldn’t be correct. I didn’t act that way towards my cousins. My young mind knew there was something more going on. 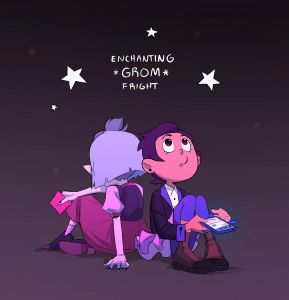 This feeling continued when Cardcaptors came over to America. When it came to Toya, I felt like there was a huge chunk of his story missing. The way he would look at Yukito told me that I was being forced to look away from the obvious.

It was around this time that I found out about censoring and that my hunches were right. Uranus and Neptune weren’t cousins. I found out the part of Toya’s and Yukito’s story that had been hidden away.

I became angry that censors hid that part of these characters. In fact, Cartoon Network thought it was better to imply incest between Haruka and Michiru than to show two lesbians in love. I remembered all of this as I discovered my own sexuality in high school. I was ashamed to admit that I liked girls as much as boys, because media told me to think this way. I was something to be hidden and censored. It was a struggling part of my journey that made me hate myself for a long time.

Shamus Kelley from Den of Geek wrote an amazing article about how Toya and Yukito helped him realize he was queer too. It’s a great read and very similar to my journey.

As I’ve got older, I continued to follow my favorite medium of animation. I watched it start to change beginning with Korra and Asami from The Legend of Korra. I read about creators like Alex Hirsch pushing back against companies like Disney for barring them from having queer characters. And as I moved into my thirties, that LGBTQA+ movement really started rolling. We got so many amazing characters in Steven Universe including Ruby and Sapphire’s wedding. Violet’s dad’s appeared in DuckTales as supportive parents and taking in Lena when she had nowhere else to go. While still problematic, Star Wars broke ground with Orka and Flix in Star Wars Resistance. There was the historic kiss that saved the universe in She-Ra and the Princesses of Power.

And now we have Amity Blight in The Owl House. 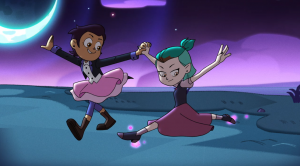 I’m so incredibly happy that the next generation of queer kids and young adults have this media. They have these shows built on the backs of those that came before them so they could thrive. It didn’t happen overnight. Creators like Hirsch, Rebecca Sugar, and Noelle Stevenson held their ground against companies that told them LGBT stories were “inappropriate” for their networks. But the ball of representation kept rolling. The sky is the limit now. We’ve reached a place where there’s no excuse anymore not to include queer representation in media. Heck, even Arthur is in on queer rep. There is no going back anymore.

I can’t believe that at the age of 32 that I’m getting to see myself so much in the medium that I love. Of course there is still plenty of work to do. I rarely get to see myself as an Asexual person represented. But this progression takes time. This is more than I have ever dreamed of. There will never be a time again where it’s okay to censor queer media. We’re past that.

I am happily jealous at how lucky you kids are nowadays.

This is probably one of the best written episodes of the season. It’s built on the character development of both Luz and Amity to reach this point. The plot thickened with the reveal that Camilia, Luz’s mother, has been receiving mysterious letters. The animation was stellar the entire way through, but in particular in the dance number. This was a great moment in The Owl House’s young run. I’m constantly amazed how this show keeps going up and up. I have no idea where it’s going to go from here. 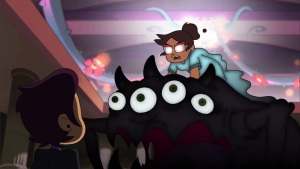 I’m sure so many think pieces, articles, and editorials will be written about Amity in this episode. So I want to talk about Luz for a moment. I actually like the fact that she’s shown no interest in romance other than with fictional characters. As mentioned above, I’m on the Asexual spectrum. And honestly, I’ve been reading Luz as Ace this entire time.

Being Ace doesn’t mean you don’t enjoy reading or thinking about romance. Plenty of Ace people have perfectly healthy relationships. I would really love to see them take Luz in this direction. There’s so little Ace representation, especially in animation, that they could really tell a compelling story. Amity and Luz could still be a couple, but in a new and fresh way that’s rarely scene in any media. If anyone could handle a nuanced coming of age, queer story, it’s Dana Terrace with writers like Molly Knox Ostertag on her team.

I must give total props to whoever created the season 1B trailer. The idea that Camilia would come to the Boiling Isles was an amazing red herring. So much of my personal speculation was wrapped up from that one moment. Then of course, we see it’s the Grom taking Camilia’s form in this episode. That was such a surprise. I immediately threw every speculation I had in the garbage, which is a good thing. A show should keep you on your toes. It allowed for the reveal at the end that someone is sending Camilia letters much more compelling.

If I have any gripes at all, it’s not about this actual episode. It’s about the season as a whole. I brought up in my midseason review about how uneven the storytelling is when it comes to Eda and Luz’s plots. The beginning of the season was so Eda heavy that it pulled away from Luz’s story. Now we’ve had several Luz and school focused episodes that I can’t remember the last time Eda being curse was mentioned. Instead of melding these two plots together, it feels like they are footnotes in each other’s journeys. Luz will occasionally help Eda with her curse. Now that Luz is at Hexside, Eda will occasionally help Luz with magic. As we’re reaching the end of the season, I want to see their stories come back together again. 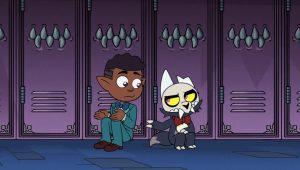 I also thought the King and Gus plot was too forced. King was perfectly fine as a supporting character in the first half of the episode. I sometimes feel instead of letting King naturally be in the story, they force him in like he’s the Pikachu mascot. It’s like he’s required to be in the plot. But at times, it hurts the story being told. The conversation with Gus and King in the hallway completely took away the momentum of Luz facing Grom. And it took away from Gus as well. Up to this point, Gus has been a bit of a weird kid on the fringes with Willow. Grom was really the first time we saw Gus in his element as a performer. It felt like a big moment for Gus that they pulled away from and gave it to King.

Though, it is good to see progression from “Really Small Problems.” King was threatened by Gus and Willow in that episode. Now, they’re part of his circle, and Gus isn’t babying him anymore. That is a nice bit of character development.

-I just can’t stop screaming about how fluid and beautiful Luz and Amity’s dance fight against the Grom is.

-I really hope we get an episode exploring the Blight Twins as individuals. Edric revealing that his fear is being alone at the same time as his twin saying she doesn’t want to be stuck with him was brutal to watch. Emira and Edric have little snippets here and there showing their differences, but for the most part, they’re rolled into one character. I really hope we get to see them shine separately at some point.

I honestly have no idea where The Owl House will go from here. With only a handful of episodes left before the end of the season, all my expectations are thrown out the window, I’m ready to buckle in enjoy the rest of this wild ride. And I can’t wait to see what kind of LGBTQA+ story they will continue to tell.

In 2012 the Disney censor note on this image would have been:
“inappropriate for channel, please revise, call to discuss” (to avoid a paper trail)

Props where props are due! This time, Disney- you did good. pic.twitter.com/HLDux1jNUk