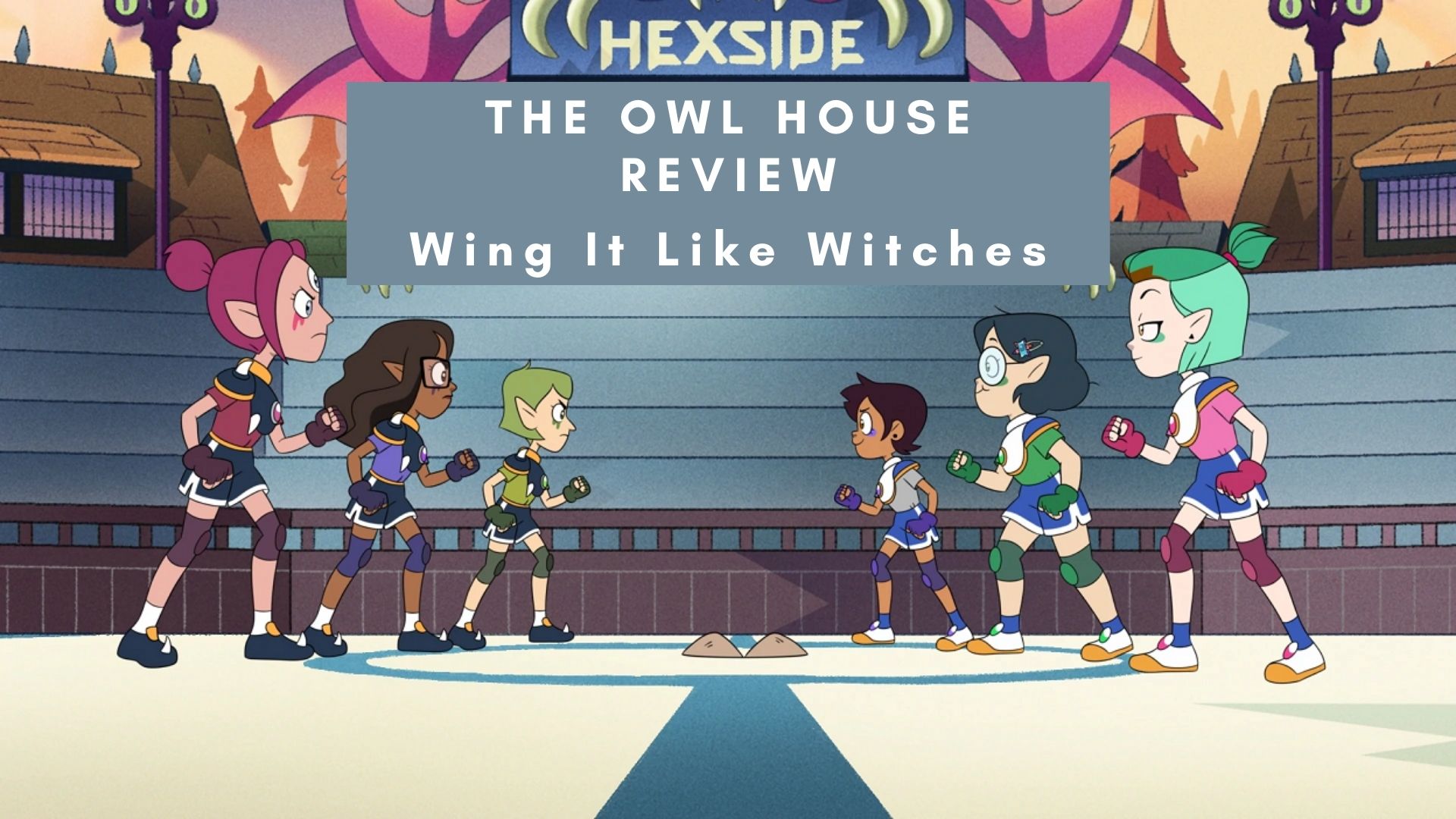 Things heated up in The Owl House this week with “Wing It Like Witches!” Not only did Luz learn a new fire spell, she also faced off against Boscha and her Grudgby team to defend Willow’s honor! After the high point of Grom last week, I was expecting this episode to be more of a breather. But there’s so much packed into this week, so let’s get started. 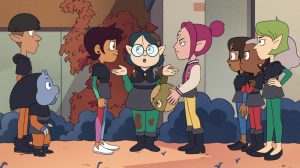 Luz and Lilith are mirrors in this particular episode. I’ll get into more detail about Lilith later, but both of them are living by the phrase “The road to Hell is paved with good intentions.” Seeing Willow get bullied by Boscha, all Luz wants to do is stick up for her friend. The problem is that Luz isn’t from the Boiling Isles and easily gets in over her head. This is a theme almost every week. Her lack of knowledge of the world often gets her in trouble with the people she cares for.

Luz had no right to volunteer Willow to face Boscha without consulting Willow first. Luz is compassionate and enthusiastic to a fault which is pretty typical for someone her age. I used to be like Luz, so I totally get where she is coming from. What’s good is that Luz owns up to her mistakes when she realizes that she hurt her friends. It’s then that she faced Boscha herself which is what she should have done in the first place. This is what makes Luz such a great protagonist. She knows when she’s wrong and works to make it better. 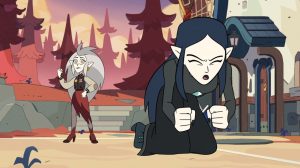 I mentioned in my review for “The First Day” about how Luz is the voice of change. As a refresher from that article, pretty much everyone in contact with Luz is being influenced by her in some way. She’s starting to break down the barriers, both magically and socially, in the Boiling Isles. People will start to notice the norms changing. This week, it’s Boscha who noticed. It’s not that Boscha targeted Luz specifically. It’s that Luz’s influence has really impacted both Willow and Amity.

The social landscape of Hexside is shifting, rippling into the world of Owl House. It’s focusing more on the importance of kindness over status and fear. My theory is this is going to be a theme of the entire series. I’ve mentioned before that the Emperor has a darker plot that’s brewing. His iron grip is beginning to erode away thanks to Eda and Luz. Eda’s free spirit effects the bigger world. Luz impacts the micro-world of her school. The norms of the world are beginning to crumble with things like Principal Bump changing school rules. People with higher social status like Boscha and Amity are being challenged. It’s been a slow, subtle storyline. But with two episodes left, this is all going to come together really soon. The Emperor ruling through fear is going to crash into the kindness and freedom of Eda and Luz. 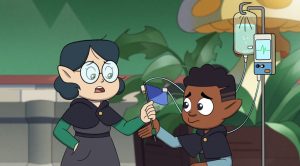 I love seeing Willow coming into her own over the course of the first season. Her confidence is gaining her own kind of unique popularity. But at no point does it ever go to Willow’s head. She loves being a genuinely nice person which is why people like her. She’s a bit of a giver, though Willow knows her limits. Still, her selflessness is very clear in this episode. When she’s upset with Luz and her hair clip gets broken, Willow focuses on Gus and helps him through his emotions. Willow doesn’t hold Luz’s behavior against her by coming to aid Luz in the Grudgby game. In turn, Gus and Luz support her and stand up to Boscha, because Willow is a friend worth defending.

Speaking of Boscha, I hope we get more of her. With Amity redeemed, I would love to see Boscha take the mean girl, top spot. Maybe she fully focuses on being the one that goes into the Emperor’s Coven. She could become Lilith’s new star pupil. Season two could be a dark path for her making her someone worth saving and redeeming. I am a sucker of a mean, popular kid redemption arc. But I want them to make Boscha a full fledged antagonist first. 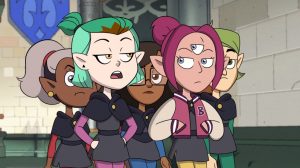 I really adore Amity’s continued story arc. In “Understanding Willow,” I mentioned how important it was for Amity to stand up to Boscha and defend Willow. Words are one thing, but actions are far more important. Amity put a stamp on her new social status and proclaimed that the people in her life now were far more important than being popular. I cheered during the cold opening before the opening title even rolled, Amity flat out defended Willow and called Boscha out. That is huge growth in such a short amount of time. It’s also such an important story. Amity realized that her behavior was hurting another person. She apologized. She worked to fix her mistakes. And most importantly, she continues to live the better example even if it’s facing off against Boscha, someone she used to be friends with. Amity Blight is a freaking inspiration.

She’s also a queer disaster child who I desperately love. I joked on Twitter that at age 32 I’m finally seeing myself in media. I too am a disaster Bi/Pan Ace woman who struggles to send a text to my crush. It’s so important to have this representation in media for children to see. I certainly didn’t have someone like Amity when I was growing up. No matter what gender or age, relationships are hard. It makes her incredibly relatable for anyone watching The Owl House.

And I’m still waiting to see if Luz is Asexual, because she reads REALLY Ace to me. Recently, show creator Dana Terrace confirmed that Luz is bisexual. Now, make her Ace as well! A Bi and Ace storyline on Disney Channel would absolutely break the internet as much as the Adora and Catra kiss from She-Ra.

Thanks to NerdWire‘s Whitney Van Laningham for sending me that confirmation article. 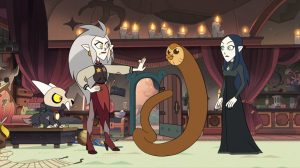 My continued gripe of Owl House is still Eda’s story. The curse storyline dominated the early season. But ever since Luz has joined Hexside, Eda has become a footnote in the show. Lilith once felt so threatening, but she’s becoming incredibly lax in her methods.

Part of me is wondering if this writing for Eda and Lilith is on purpose. Lilith is clearly a powerful witch of her own. She’s the head of the Emperor’s Coven with so many resources at her disposal. As of this episode, she knows exactly where Eda lives. This means that at any point in the series so far, Lilith could have stormed the Owl House with an army of soldiers at her disposal and taken Eda by overwhelming her with numbers.

This is where Lilith is like Luz in the whole “Road to Hell” thing. Eda and Lilith clearly love each other. There is no bad blood between them. They simply are on two different life paths. The reason I think Lilith hasn’t invaded Eda’s house with an army, resorting to trying to arrest her sister through playing a Grudgby game, is because she doesn’t actually want to force her life on Eda. She wants Eda to make a choice to join the Emperor’s Coven on her own accord. Lilith believes Eda would be better off in the Coven, making her intentions come from a place of love. But unlike Luz, Lilith isn’t willing to respect Eda’s ways. Lilith thinks her life is better than her sister’s. 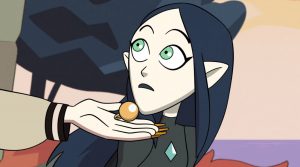 There also could be something much more sinister at play. Lilith is getting scared of her mounting failures to capture Eda. It sounded like she reached an ultimatum this week by saying she won’t come to Eda alone anymore. With two episodes left, I think we’re going to see Lilith and the Emperor make their move.

This would be really welcomed for me. Like I said, Eda is becoming a footnote in Luz’s story. Our wonderful Owl Lady was such a powerhouse presence for the first half of the show. I want to see her story come back into play.

-Luz’s montage of teaching Willow and Gus what a montage is was comedy gold. 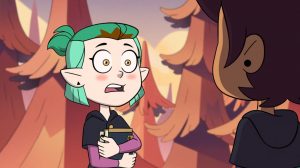 -KING IN THE CHEERLEADER OUTFIT!

-Touching back on Luz’s influence, I do like the little moment where we see her compliment Boscha’s teammates. They immediately respond to her kindness. It’s a sweet moment to see them rally around Luz and Willow at the end.

-I love Hooty at all times, but Hooty was particularly great in this episode. I’m interested in seeing what kinds of powers he possesses. He’s been called a demon before back in “Hooty’s Moving Hassle,” but is he actually a demon? He seems to possess a ton power. But because he’s trapped in the house, he can only do so much. I was impressed with his abilities this week. I am waiting on that Hooty backstory.

It feels like something big is coming. I can’t wait to see what The Owl House brings next week in the penultimate episode!