DuckTales: The Loss of Donald’s Agency as a Parent 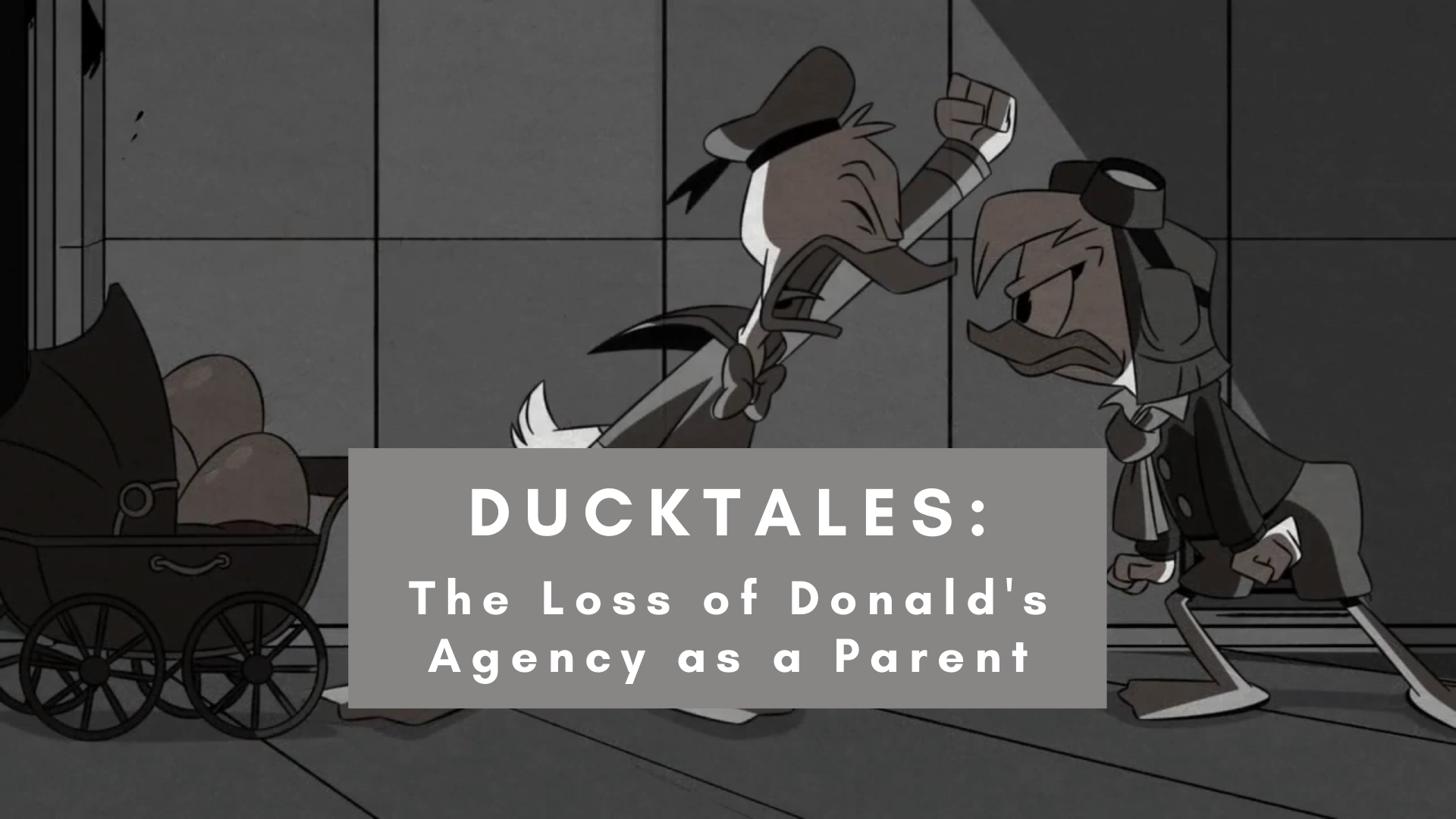 I have been so impressed with Disney’s reboot of DuckTales. Their handling of deep and important storytelling is top notch. They’ve covered domestic abuse and the resulting PTSD with Lena. The creators introduced confronting past mistakes with Donald in therapy and Della’s introduction to the show. They’ve incorporated LGBTQA+ characters with Violet’s dads and, more recently, Penumbra. The writers have showcased their talents time and time again the last three seasons.

But there is one story I really wish they would cover in the show. I admit I’m a little biased in wanting this, because I have an incredibly blended family. I wish they would address Donald’s role raising the triplets and how that has changed with Della’s arrival. 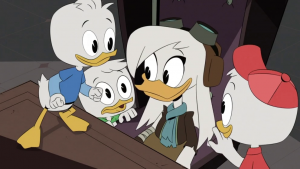 If you’re reading this article without seeing the show, Della and Donald Duck are twins with Della being the mother of Huey, Dewey, and Louie. Before the start of the series and before the triplets were hatched, she vanished and was thought to be lost in a rocket accident in space. It turned out she was trapped on the moon, surviving by her own determination to meet her family and with the help of the Moonlanders. In her absence, Donald raised his nephews on his own up until the pilot episode when they moved into Uncle Scrooge’s mansion.

Della is a big driving force for the series. Dewey and Webby spent the entire first season trying to find clues to her disappearance. The narrative changed with her arrival in season two. It’s been a new and interesting family dynamic since then.

I really love watching Della come into her own as a mother. She dreamed of what it would be like, but when it came to application, she wasn’t a perfect parent. Her expectations of her sons clashed with the reality of who they were. She’s had to learn a new type of responsibility. She doesn’t always get it right, but Della is willing to constantly try and fail until she does. 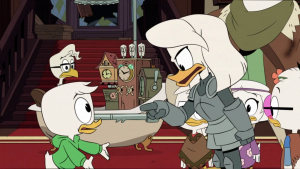 The moment where it really hits home is the episode “Timephoon!” when Della grounds Louie for endangering the family. It feels like it should be a normal DuckTales ending where they all hug it out over Louie’s mistake. Instead, Della changes the entire tone by Mommy-ing up and stepping into the responsible parent role. This isn’t some cheesy ending where everything is okay just because Louie apologized. She makes sure there are consequences to her children’s actions. It’s a very powerful moment that showcases her journey she’s be on up to this point.

On the flip side after Della’s return, Donald has been able to enjoy more downtime. Before, Uncle Scrooge and Mrs. Beakley helped him with the kids, but much of the parent role was on his shoulders. Now, Della’s taken on the parental storyline. Since then, we’ve seen Donald gain a love interest with meeting Daisy. He’s been spending time with his friends, Panchito and Jose, and they’ve worked on their music career. It’s clear that Donald is finally getting some time to focus on himself after spending so many years raising the boys.

Donald as a parent is the part I don’t want to get lost in all of this. Yes, it is so important that Della gets to have time with her sons. She deserves to have that space and freedom to do so. She knows that it was her mistake that made her lose time with them, and she has sacrificed so much to get back into their lives. But I don’t want Donald and his role in the boys’ lives to get tossed out either. 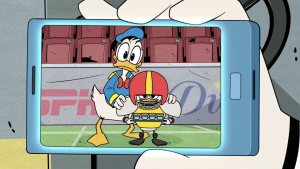 Donald is their parent too. He might be their uncle through blood, but he’s also sacrificed as well. Donald put his relationships and his music career aside so he could put food on the table. He was at their activities, supported them, and worked hard for his nephews. As mentioned, he even went into therapy for them. He saw his unchecked anger as a flaw in himself. Donald chose to work to be a better person for his kids.

I feel like this is such an important story that’s missing in DuckTales since Della’s return. So many children don’t grow up with their birth parents. Many are raised by aunts, uncles, grandparents, and other family members. As I said, I have a blended family myself. I know what it’s like to be loved by two step parents who are not my blood. A lot of kids have both the person who raised them and their birth parents in their lives. It’s a story that needs to be told in the series of how to balance these relationships. 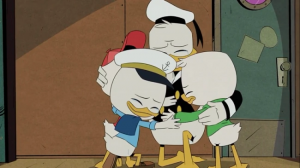 As we’re getting deeper into the show, I want to see this addressed soon. It could be me reading into it, but I hope we’re already seeing this slow parental tension starting to grow between Della and Donald. In “The Trickening,” Donald tries to hold Della accountable when she wants to scare kids on Halloween and wants to use Launchpad’s fear as part of her fun. But Della quickly realizes that Donald was right when Launchpad (doesn’t realize that he’s) actually threatens to hurt people. That is a parental instinct that Donald has honed over time. It’s his experience which is something that Della lacks.

In “They Put a Moonlander on the Earth,” Della is totally okay that Dewey puts himself in danger to be famous, because it “sounds fun” to her. That episode wouldn’t work at all if Donald would have been there to stop Dewey.

It’s these moments that I want to see Della and Donald in together more. Yes, Della deserves space to get to know the boys on her own. But Donald is her best resource as he raised them. He knows their kids better than anyone else. I feel like the longer DuckTales gets in the show, the more Donald is losing his agency as Huey, Dewey, and Louie’s parent. And Della needs to thank Donald too at some point. It was her mistake that got her stuck on the moon and suddenly thrust her three kids into his life. She needs to acknowledge this as well. 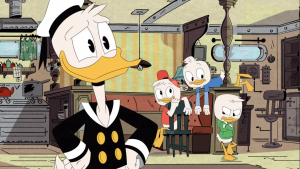 I would love to see the boys recognize that more too. The triplets have shown appreciation for Donald. Though, I feel like they have so much focus on Della lately that they’re starting to forget the person who raised them. Perhaps they celebrate their first Mother’s Day with her. When they notice Donald is upset, the triplets realize they never gave him a Father’s Day. So, they create an Uncle’s Day just for him. I want to see some kind of story where they all as a family recognize Donald for everything he’s done for the family.

DuckTales is so good with these rich storylines that tell emotional and personal stories. But for once, this is one where they’re missing the mark and letting it slip away. They need to make at least some kind of stride where Huey, Dewey, and Louie can have Della as their mom and Donald as their parent equally. After everything he’s done for her, Donald at least deserves a thank you from his sister.

It’s the least they can do for one of the best fathers in animation. Donald Duck is a damn good father, and he deserves so much more credit than he’s currently getting in the show.