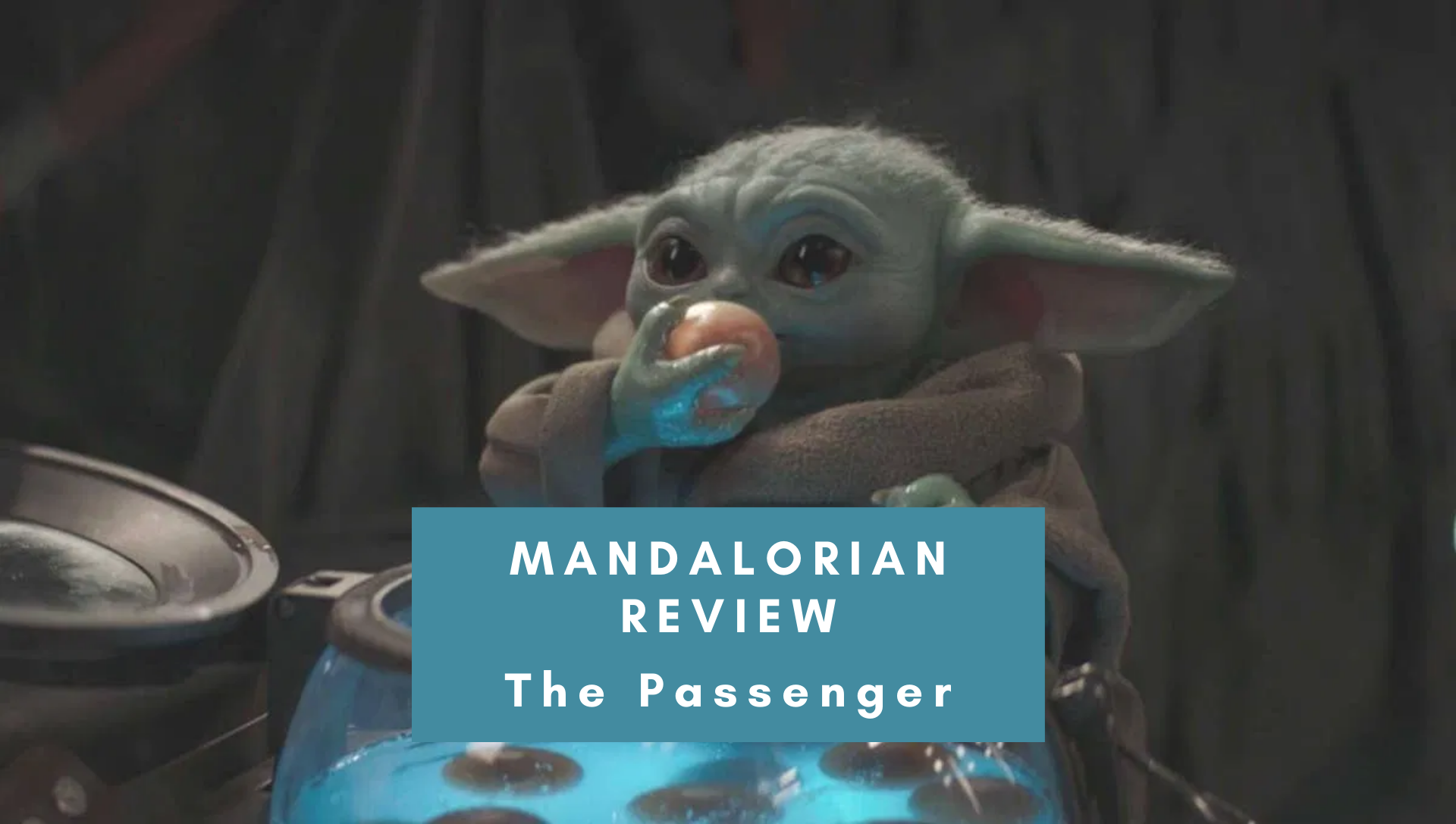 This review has spoilers for The Mandalorian episode “The Passenger.”

I absolutely love the newest The Mandalorian episode “The Passenger.” While I do understand some of the online feedback wanting the plot to move faster, I think the show is really pressing forward at a breakneck pace in another way. They are sprinting with Din’s character.

The first two entries of season two reminds me a lot of early Star Wars Rebels. On first watch, they were strong character establishing and defining episodes. Early Rebels didn’t seem too heavy with plot. It wasn’t until we got much later into the series that we were able to see the importance of those stories. So let’s slow down the criticism of “The Passenger” a little bit. We have no idea how important it is in the greater context of the story. It could end up being a dreaded “filler” episode, or it could be the most important episode of the season.

Let’s let the narrative play out a bit more before we judge it too harshly.

Because there is a lot of excellent work analyzing Din as a character in the episode. Last week, we explored what it meant to wear the Mandalorian armor through Cobb Vanth and Boba Fett’s introduction. This week, we’re looking at his parenting as well as Din’s honor and code. Frog Lady, who I hope they name soon because this is how she is listed in the credits, is a foil to our main character.

Both are parents who are in a position trying to protect their young. Frog Lady is willing to do anything for her kids, even if it means hiring a complete stranger to take her to her husband on another planet. She leaves the safety of the ship to find a hot spring to keep her children alive. She risks activating a killer droid to have communication with Din, so she can plead to him to save her babies. We even see her capabilities to be lethal when she shoots the spiders threatening Baby Yoda. She’s willing to fight for Din’s child. Frog Lady is a quiet but powerful force and a true mother. She is only pushed to the violent extreme when necessary.

This is compared to Din who is constantly exposing his child to violence. The cold opening of the episode is played for laughs, but the words “He’s seen worse” from last week still hangs heavy in the air. Din is trying his best. Being a parent was shoved on him, and it’s an adjustment. The violence comes from a place of protection. That same instinct is in Baby Yoda as we saw last season when he Force choked Cara Dune. He did it, because he thought Cara was hurting Din. Din and Baby Yoda are still bonding. While the violence is affecting the Child, which I’ll address in a moment, Baby Yoda is affecting Din as a person too. We saw the karma of that come into play this week.

Chapter Six “The Prisoner,” another episode I’ve seen being pretty divisive among fans, came back into play. That episode was about exploring who Din used to be. Now having the Child, he’s becoming a kinder and more thoughtful person. Granted, this is based on our limited knowledge. We don’t know his full past. But from the beginning of the series up to that point, Din has softened while having to care for someone else.

His kind actions from Chapter Six are what save our heroes here. The X-Wing pilots, one being Trapper Wolf who appeared in the episode, recognized Din’s efforts in trying to save one of their own. The other pilot, Carson Teva, mentioned that locking up the rest of the crew from Chapter Six was enough for them to give Din some leeway. They traded one good deed for another. Din tried to save a life. In return, they helped stop the spiders trying to kill them. Din’s past and current actions are starting to shape the narrative of who he is going forward.

We also have to note one more similarity between the Frog Lady and Din. She tells him that her and her husband’s line are on the edge of extinction. They have fought hard to carve out a life just to survive. Isn’t that exactly where the Mandalorians are in this time period? They’re hiding in whatever nooks they can find to survive. Din’s way of life could end at any moment. She might not seem like it, but the Frog Lady is similar to him in a lot of ways.

She is also the one to call him out on his honor. She brings up the Mandalorian stories of the past. When all seemed lost, it’s the Frog Lady that reminds him what his legacy is. She’s the one who tells him who he is now, knowing that his people, the Mandalorians, are not ones who give up easily. Din’s character is perseverance and determination. Those are traits that Frog Lady has too.

Between the parenting and lineage foils and seeing the groundwork of last season pay a reward here, “The Passenger” really showcased how far Din has come along. Baby Yoda’s cuteness is powerful, but he’s still not a full character yet. Din has to be the character carrying the show.

But that’s not to say that Baby Yoda’s arc isn’t important either. I mentioned last week that I hope they explore what it is to be a Force user in a time where there aren’t a lot of Jedi and the Sith are in hiding. In “The Passenger,” Baby Yoda was really dark. I honestly thought they were going to do some kind of Force connection with Baby Yoda and the eggs. Like they were setting him up to feel the budding life inside the little carrier.

Nope! He’s just a hungry toddler murdering this woman’s offspring. He eats one of the unborn spiders which makes the mother spider come after all of them. Din has to feed this child more. Get that baby some space Animal Crackers or something.

But on a character level, Baby Yoda is becoming shockingly violent. It’s hidden really well in his cuteness. It is not okay that he’s killing Frog Lady’s children. I am happy that Din is aware of it too. He spends a good chunk of the episode trying to keep his kid away from her eggs. I have to wonder if the violence Baby Yoda is being exposed to is making him not value life as much. He sees his father figure constantly killing. Yes, Din is protecting him, but he’s still setting that example for his child.

Also, it’s so hard to tell how aware Baby Yoda is of things. Sometimes, he really does feel like a toddler. Other times though, he knows exactly what’s happening around him. I keep thinking back to Chapter Eight when he healed Greef Karga and stopped the flamethrower. He knew the threats there. But then in “The Passenger,” he’s blissfully eating someone’s offspring. It makes it tough for me to gauge him as a viewer. Is he just a cute hungry kid who gets into trouble? Is he more Dark Sided than we think and enjoys the chaos? Is it both? It’s so hard to tell.

Friendly reminder that Anakin Skywalker and Baby Yoda are the same age. There must have been something in the water that year to make these two want to kill kids.

Peli is a gem in this series. I love every time she shows up, and she continues to be a delight in “The Passenger.” I have to wonder if they’re building up her character to bring in a younger version of her in the Obi-Wan series. That would be some really cool synergy between the two television shows.

Though to touch base on something I brought up last week, I had speculated that she might know more about the Force than she’s letting on. I am now retracting that. Din told the X-wing pilots “May the Force be with you” this week. I’m starting to think that the word “Force” is more of a colloquialism in this era. Sort of like how people say “Oh my God” when they’re not Christian. So he knows it’s a phrase, but he doesn’t actually know that the Force is a thing and is what he’s looking for with the Child.

Some random thoughts to round out the episode:

-There were so many little Star Wars Rebels nods like the Idiots Array and the spiders. Even though they weren’t the exact same as the Krykna on Atollon, they were close enough to still give me the heebie jeebies.

Me watching Mandalorian:
It’s the Rebels googily eyed-
AHH NO THIS IS WAY WORSE!!!

-I’m really happy that Misty Rosas gets to continue to be in the series after Kuiil died last season. Sure, Nick Nolte voiced him, but Rosas acted the crap out of that Ugnaught. Seeing her return in “The Passenger” as the Frog Lady is such a joy. She’s amazing at what she does.

-The scene with the X-Wing pilots, who are the police force in this galaxy, trying to pull over Din, played by an actor of color, because he didn’t have a beacon on his ship was a scary moment. It hit really close to our real world, especially the one in the last year, to make it a threatening scene. I don’t know if that was what the writers meant to do, but that scene certainly hits differently in 2020.

-I like seeing that Baby Yoda is trying to be more verbal to communicate with Din. It’s a nice touch on the bond that they’re building together.

I really loved “The Passenger.” We don’t know if it’s going to do a lot in the overall plot of the series. But I can say for sure that it did so much in the way of analyzing Din’s character. The Frog Lady is stellar too. I hope we get more of her.

Also, Baby Yoda is an agent of chaotic good. There I said it.