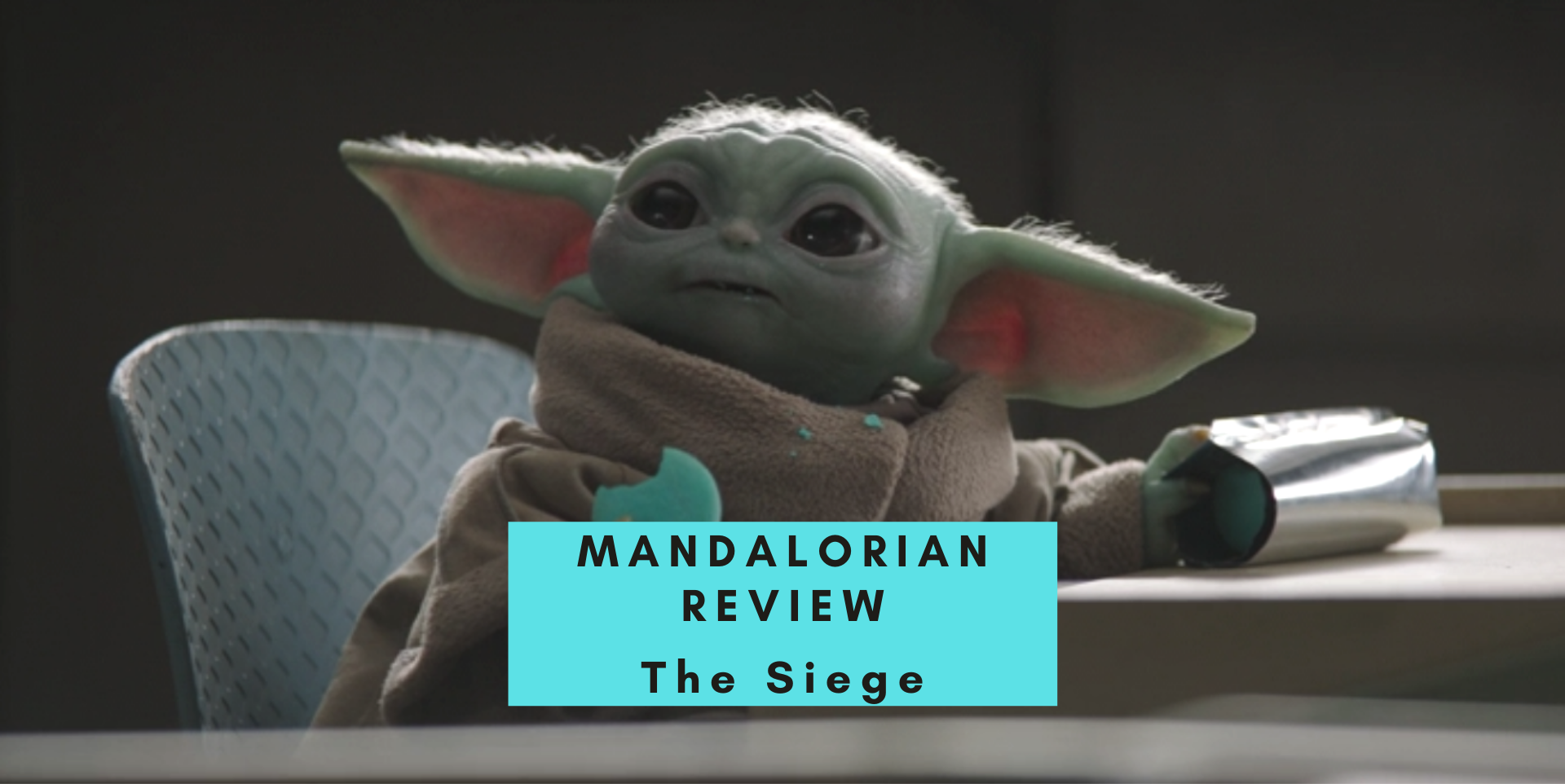 This review will have spoilers for The Mandalorian episode “The Siege”

On its surface, The Mandalorian Chapter 12 “The Siege” feels like a fun thrill ride side quest. The majority of the episode was about our heroes breaking into an Imperial complex, setting it to blow up, finding out it’s a secret lab, and then escaping. Carl Weathers did a fantastic job directing. The fights and chases feel heightened by these huge sweeping shots that fit into any action movie. But what really holds this episode together are the quieter scenes that really hit hard in the middle of all the noise. 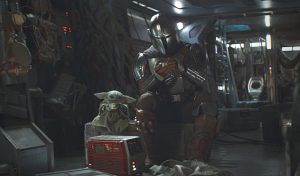 At the beginning of the episode when Din lifts his mask just enough to eat, that moment feels so big. I personally believe that’s how he’s been eating this entire time with the Child, but it’s definitely a choice for the audience to see it. After meeting Bo-Katan last week, the next part of Din’s journey is to figure out which path he’s going to go. They’re giving us little snippets here and there of various possibilities. He could work towards not having the armor at all like Boba Fett, which is why they showed us the peek of Din’s chin. Or he could double down on wearing it, which is why he still doesn’t fully remove his mask in front of the Child. Din is still in the in-between with his character. Until he meets a certain character *hint hint Ahsoka Tano* to give him a nudge, he will continue to exist in this middle ground.

It’s fun to return to Nevarro to see how much it’s changed in such a short amount of time. Under Greef’s leadership, it’s completely turned around except for the one Imperial holdout which we see in the episode. This says a lot about Greef’s leadership skills. Sure, there’s probably some underlying motives here with making money. He flat out says he wants Nevarro to be a trading location in the Outer Rim. Though in cleaning up the planet, it showcases the good sides of what morally grey characters can do. The shift he made from antagonist to ally makes us look at who he is as a person. Before, it felt like Greef was trying to survive in a new world. But here, we’re seeing who he really is. Greef is a good man who does morally wrong things at times, because the galaxy can be a harsh place. It makes him a fascinating character in the series. 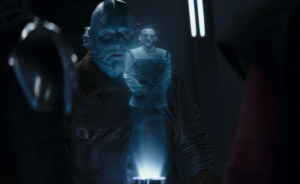 The next big quiet moment is the return of Doctor Pershing, the reveal the base is actually a lab, and the mention of M-Counts. Our heroes look on in horror at the malformed beings in the test tubes. Doctor Pershing mentions experiments to transfer blood from the Child into test subjects.

And I think it’s all a big red herring. I think they want us to believe this is about Snoke and the return of Palpatine in the Sequel Trilogy. Knowing Dave Filoni, this is a purposeful misdirect. I think The Mandalorian will play out a lot like Star Wars Rebels or Star Wars Resistance. It will have ties to the Sequel Trilogy and maybe give some background on some things. We might see the occasional character here or there. But I think The Mandalorian will be able to stand on it’s own without the Sequel Trilogy being required viewing. Those beings in the test tubes are there to make us think it’s about Snoke and Palpatine. I am betting now it’s actually something entirely different. While I said last week that I do believe Gideon is already in the First Order, I think this project is for himself and not for Palpatine. 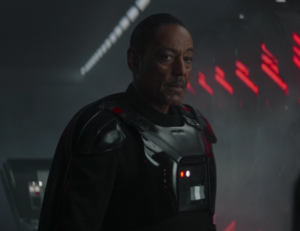 Then there’s the ending where we finally get to see Gideon in the flesh, working on some kind of droids. Full disclosure, I am not an Extended Universe person. I’ve only recently started to get into it thanks to my love of Thrawn. I’ve only heard of Dark Troopers, but I am not familiar with them at all. My first thought seeing the droids were they looked like the Tie Fighter pilots earlier in the episode. I remembered talks of cloning First Order troopers in The Force Awakens. That’s where my brain went to. I absolutely thought they were clones of some kind to make more manpower for the Empire.

But there’s been a lot of talk about Dark Troopers around the internet since the episode aired. If they are Dark Troopers, I am not the lady to discuss this topic. Let me direct you to my friends over at The Geeky Waffle and Pink Milk podcasts who gushed about them at length in their livestreams. Also, Star Wars Explained and The Lore Master will be able to provide plenty of context too. 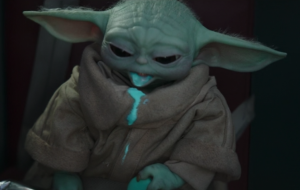 And finally, I got moments that I really wanted from this show going into season two: Baby Yoda being an actual toddler.

And the poor Din has to clean up after his child. The cold opening is such a perfect little scene of trying to instruct the Child to fix the Razor Crest. Anyone who has ever tried to guide a toddler to go along with anything knows it can be difficult. But the spit up scene at the end killed me! Din uses his own cape to wipe up his child’s vomit! I felt that so deep. While I don’t have kids of my own, I have lost many garments to baby nieces and nephews’ messes. Please give me more scenes of Baby Yoda doing baby things. I need it.

Carl Weathers filmed that puppet so well. He filmed it like a proud grandfather capturing every precious moment to share on Facebook to all of his friends. It was perfect.

Some random thoughts to round out the episode:

-Macarons are canon in Star Wars. This is my new favorite thing.

-And at least Baby Yoda asked the other boy politely for his macarons before stealing them with the Force. That’s some character development from the last few episodes where he just took whatever he wanted.

-I was so excited to see a school in Star Wars. We rarely see schools unless it’s for the rich or the Jedi. Tam from Star Wars Resistance talked about her upbringing, which made me believe that most people in the galaxy was homeschooled. Perhaps this is a New Republic initiative to educate the galaxy. Either way, I was happy to see kids actually learning.

-I love Mythrol as a character. I always enjoy when stories get a little meta. Having a comedy character pointing out the Empire’s lack of safety regulations is hilarious. Though, I wish they would give him a name. Calling him by his species when he’s the only alien in the group is a bit of a sour note. It could be on purpose too. I could see Mythrol being a mole for Moff Gideon. His disenfranchisement from how the others treat him could push him away as an ally.

-I really like how the New Republic is being presented in the series. They’re the power in charge of the galaxy, but we’re seeing how stretched thin they are. It’s clear they need help in the Outer Rim. They’re aware of something *hint hint the First Order* is happening, but they don’t know what. It makes me hope that we’ll see a peek of a movie character, maybe Mon Mothma, in the future. This feels like set up for that.

Katy O’Brian who plays this imperial officer and is a martial artist and lesbian and is confirmed to return later this season 😌 hope she does some fighting pic.twitter.com/x3jhFQqwBB

“The Siege” was a fun romp. It reminded me a lot of the Star Wars rides at Disney. But those quieter moments are where the episode really thrived. 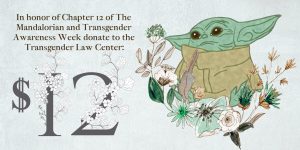 Something else that’s thriving is the Trans Rights are Human Rights: This is the Way fundraiser. This week, they hit their goal of $15,000. I’m so proud of them for it, because Cara Dune was the hardest part of this episode. I really like Cara a lot, but it’s become hard for me to separate her from Gina Carano. Knowing that actress’ words has hurt my friends makes me so angry. I’m proud to see the fandom respond to her actions this way.

Created by Maggie Lovitt of Your Money Geek along with Candace from The Geeky Waffle podcast and Eric from The Living Force Podcast, the Trans Rights are Human Rights: This is the Way fundraiser was made in response to the transphobic rhetoric being shared by one of The Mandalorian’s main castmates. Not only is there a Go Fund Me account, but there is also a Teepublic store with items created by Maggie, Candace, and Bryan from Pink Milk where proceeds go to the Transgender Law Center. If you can, please consider donating to their Go Fund Me page or purchasing from the Teepublic store. If you can’t donate, please share the fundraiser with others who can.