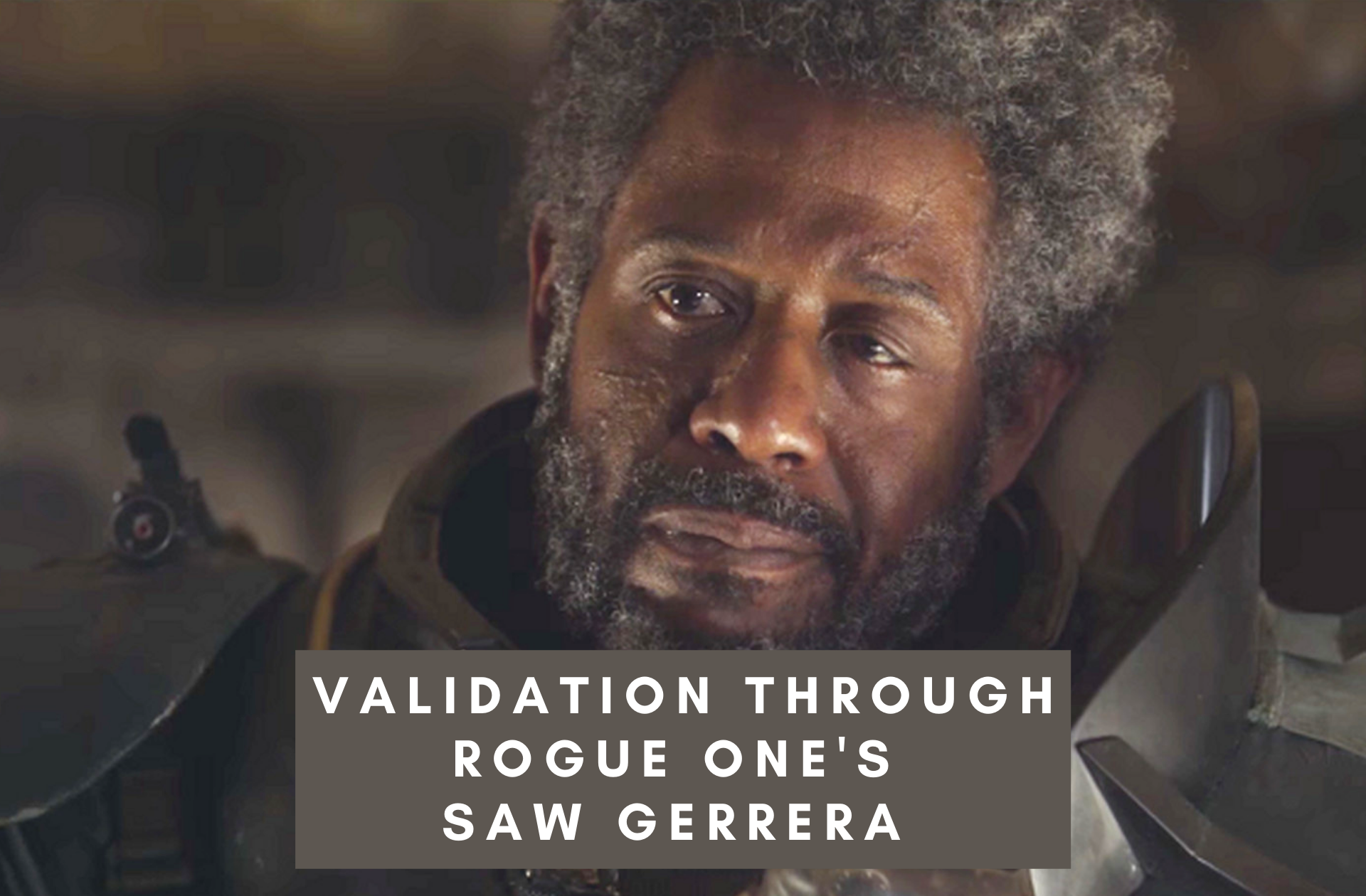 Happy Rogue One Day! My favorite Star Wars movie turns four today! I realized I discussed this particular topic when I worked for What the Fangirl, and I touched briefly on it when I told my Star Wars story. But I never gave a full background on why Saw Gerrera’s announcement in Rogue One means so much to me.

Animation is my first love of Star Wars. Clone Wars was my gateway into the fandom, and it’s the reason I have my podcast, job, and career choice. I’ve met so many wonderful people through Star Wars animation. It helped me through incredibly hard points in my life. Again, you can read more about that here in my Star Wars story.

I was the manager of a comic book store for a little more than five years. It was normal to get into friendly debates over various nerd properties from movies, books, comics, television, and everything in between. It was normally one of my favorite parts of my day.

Star Wars was a popular debate topic as this was a little after The Force Awakens came out. Everything was new. There were comics and books being released. Of course there was discourse about the Extended Universe going into Legends, but people were still genuinely excited for new content.

Except for one particular part which was animation. Because whenever I would bring up Clone Wars or Star Wars Rebels, which was in its early seasons at the time, these male fans would scoff at me. And yes, the majority of them were men. Actually, most of the women who I would talk Star Wars with were fans of animation too.

These male fans would make fun of me. They would say I wasn’t a real fan for liking childish stuff that didn’t matter. I remember two different guys saying that Dave Filoni would never amount to anything. They would call animation a waste of time and berate me for it liking it. What I heard the most was it wasn’t REAL Star Wars if it wasn’t on the movie screen.

It was harassment. I was harassed for months at my job for being a fan of Star Wars animation. Even when I argued that Clone Wars and Rebels were in the current canon, I would be called an idiot. And then they would normally follow up with how great the Extended Universe was for another twenty minutes.

It was difficult at times. For the work side of things, it’s retail. I couldn’t just walk away from the argument, because I had a store to run. I couldn’t call security over a Star Wars debate. Usually if I gave a warning that they would have to leave the store for calling me an idiot, they normally knocked it off until the next time they came back to try their luck again. It made existing as a female Star Wars fan really exhausting.

It was also personal too. As I said, Clone Wars helped me through some of the hardest times in my life like losing our house to foreclosure (again see my Star Wars story for details). How could it not be “REAL” Star Wars when it meant so much to so many people like me?

And then on June 22nd, 2016, a miraculous thing happened. I was at work when I saw that Rogue One was trending on Twitter. When I checked the news, my heart stopped. Forest Whitaker was going to play Saw Gerrera in Rogue One. A Clone Wars character! An animated character was coming to life for a movie!

I checked another news source just to make sure it was true. And then another. And then three more. I would go home that night and check a few other sources in case I had imagined it.

Right there behind the counter in my comic book store, I started crying. It was a Wednesday, new comic book day. There were customers there to pick up their pulls for the week. My coworker didn’t know why I was suddenly crying, but he was happy to watch the store for me while I stepped in the back for a few minutes to gather myself again. And I cried more in the break room.

It was relief. It was pride. It was complete validation after being harassed for months about something I loved so much. Those jerks couldn’t come into my store and call me stupid for loving animation. Because now according to their terms, it was REAL Star Wars. Saw Gerrera was going to be on the big screen. He was going to be in the movie alongside the rest of the cast. I fell in love with Rogue One that moment, half a year before it ever hit theaters.

Of course more news came out. The Ghost and Chopper would make cameos bringing Star Wars Rebels into live action. While Mon Mothma and Bail Organa got their start in live action, they both had their Clone Wars counterparts too. And after the movie premiered, Rogue One has been folded into the animated shows becoming an important piece of Star Wars lore.

To me, Rogue One is the canon gold standard. It’s what The Rise of Skywalker should have been. It bridged trilogies together, featured animated characters, and touched on the books and comics all in one film. It continues to prove over and over why it’s important. With Disney+, “REAL” Star Wars is looking very comfortable in a television format. I wish I could speak to those men now with shows like The Mandalorian dominating pop culture. I can only wait to see what more we get with Andor coming.

Rogue One is my favorite Star Wars movie for the characters, story, and its purpose in the franchise. But for personal reasons and to be a little petty, it allowed me to look the men who harassed me right in the face and go “Well actually, animation is REAL Star Wars, because of Rogue One.”