The Power of Link’s Voice in Breath of the Wild 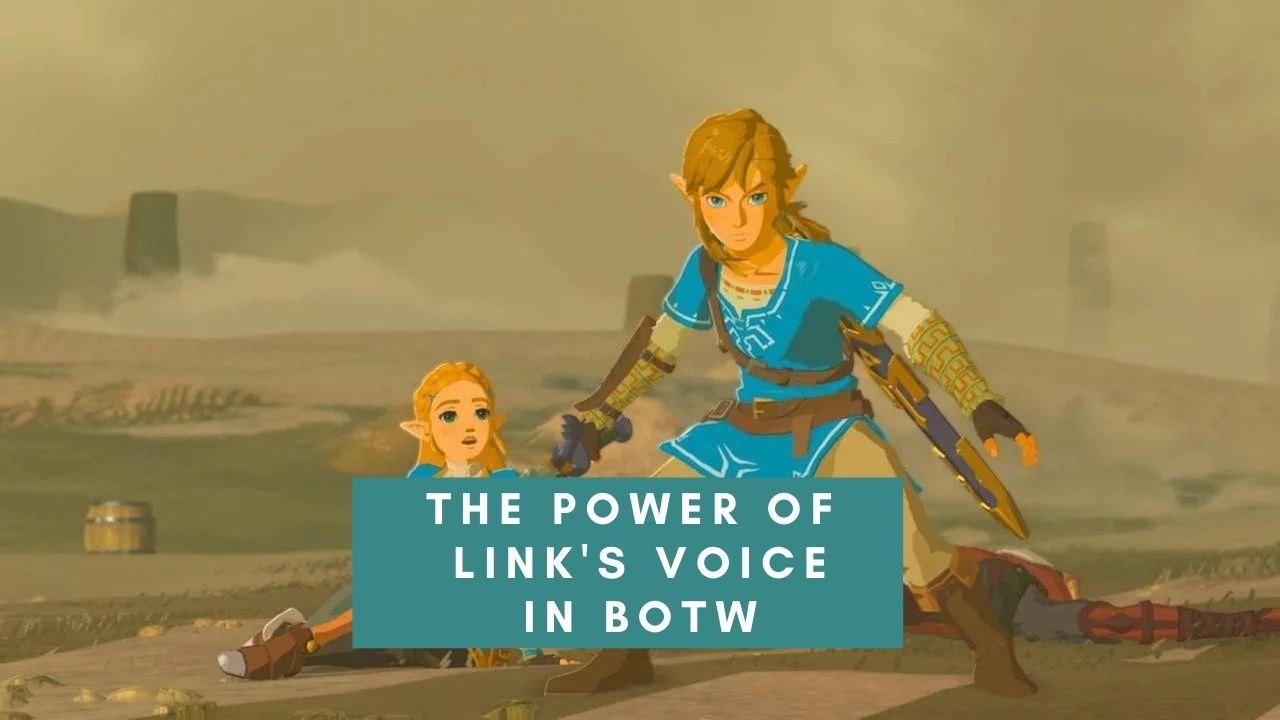 Happy 35th anniversary to The Legend of Zelda. Here’s to 35 more years and beyond!

I never really thought about Link’s voice throughout The Legend of Zelda series. He had always been the silent hero. I enjoyed him speaking in the manga as a change of pace. But in the game, his lack of voice was a choice to help the players immerse themselves as the main character. I understood that when Link had dialogue choices, it was a mechanic to move the game along. Sure, there had been times I wondered what a fully voiced Link would be like. It would be a great update from the delightful meme worthy The Legend of Zelda series with the iconic, “Well, excuuuuse me, Princess!” But I never needed Link to be fully voiced.

That is until Breath of the Wild. As I set out on a new Hyrule adventure, it had all the same tropes of the previous games. Go save the princess, save the kingdom, fight Ganon, and so on. I would have interactions with characters in the game for main missions and side quests. Storywise, it was like most Zelda games. 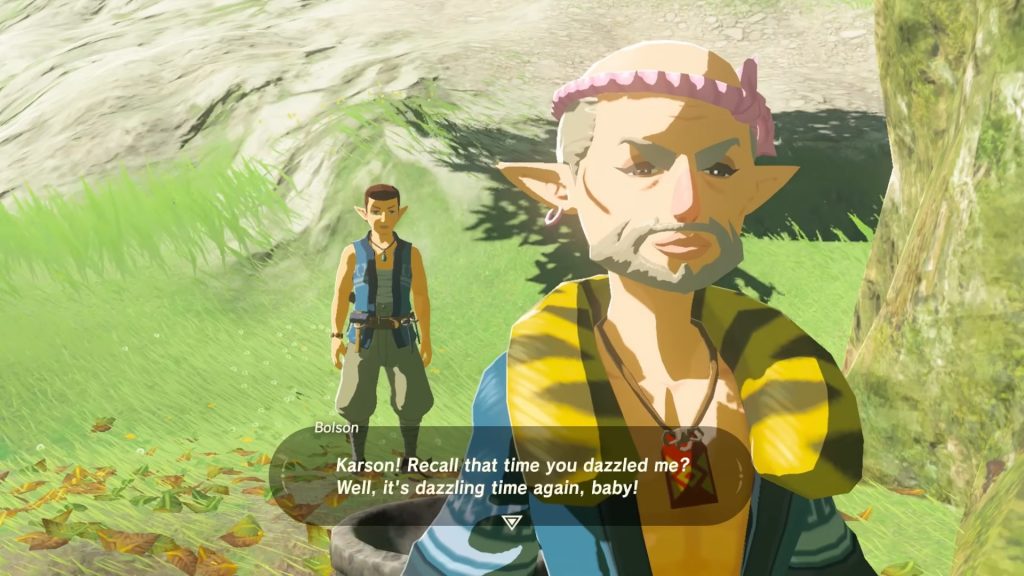 Then, I arrived in Hateno Village for the first time. Up on a hill and across a bridge, there we meet the lovable Bolson and his construction crew. Right away, I could tell he was a very queer coded character, which I appreciate. Bolson is a business owner with employees who care for him. And through the dialogue choices, Link builds a good relationship with him with the “Hylian Homeowner” and the “From the Ground Up” side quests. I always loved interacting with Bolson, but I couldn’t quite put my finger on why our conversations were impacting me so strongly.

That is until I met Vilia.

I do want to note that Vilia’s introduction is not without its flaws as it plays on many tired tropes in the queer community. There have been many articles written about her that I suggest you read as well. I am also a cis woman, so this is in no way me speaking for the trans community. This is me sharing my reaction to Vilia as a cis queer woman.

Please check out these amazing trans writers and streamers to follow!

During the “Forbidden City Entry” main quest, Link has to try and find a way into Gerudo Town where only women can enter. We meet Benja who says that a man has entered the city walls. I mentally groaned. I hoped that we wouldn’t get some horribly handled story about cross-dressing. But I wanted to continue my game, so I set out to find this “man” with my guard up and ready for disappointment. 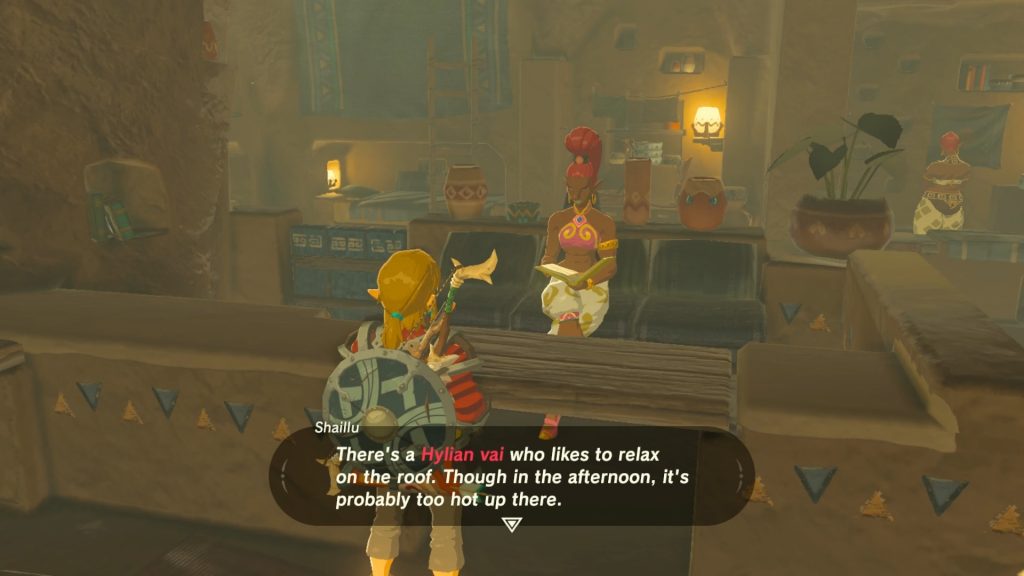 I reached Kara Kara Bazaar and spoke to the shopkeeper, Shaillu, about where I could find a man. She responds she doesn’t know of any man, but there is a Hylian woman who likes to relax up on the roof. When Link heads up there, we meet the beautiful Vilia.

As I went through the conversation with her, I realized something. The game wouldn’t move forward if Link chose to call Vilia a man. She stopped any conversation from proceeding. I thought back on the previous conversations in the mission. Benja had been misgendering Vilia, but Shaillu hadn’t. She called Vilia the woman on the roof. 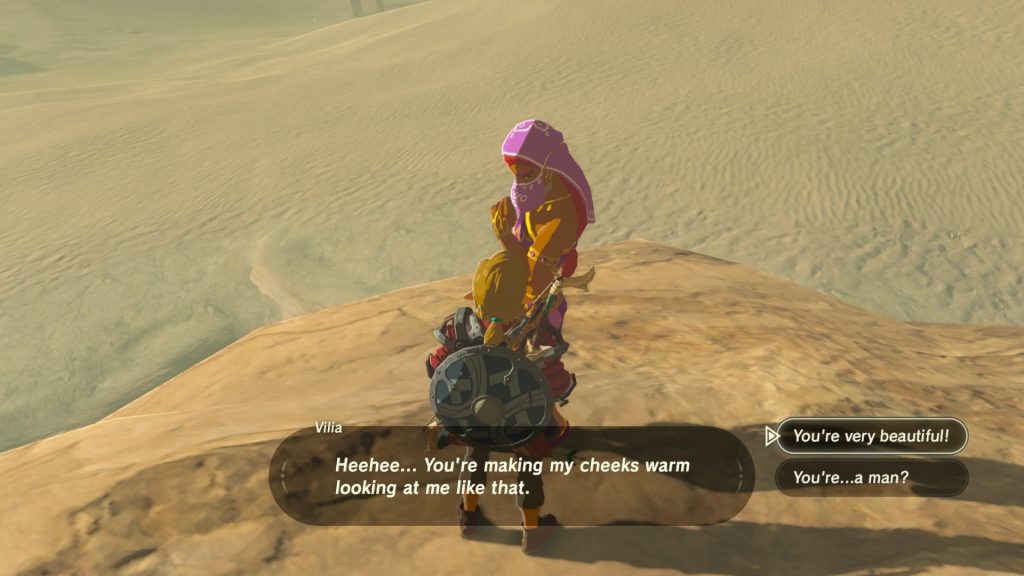 It hit me so hard that Vilia was a transgender woman. Shaillu’s information informed Link that she and all the other Gerudo women saw Vilia as a woman and welcomed her into their home. When Link, our hero, follows the same path as the Gerudo and compliments Vilia on how beautiful she is, the game continues. It makes it known that the only correct way to proceed is respecting that Vilia is a woman.

I sat in shock for a while after that, realizing why Bolson and now Vilia were hitting me so hard. It was because Link, the hero, treated these people with respect and understanding. As a queer woman myself, the hero would have treated me that way too. 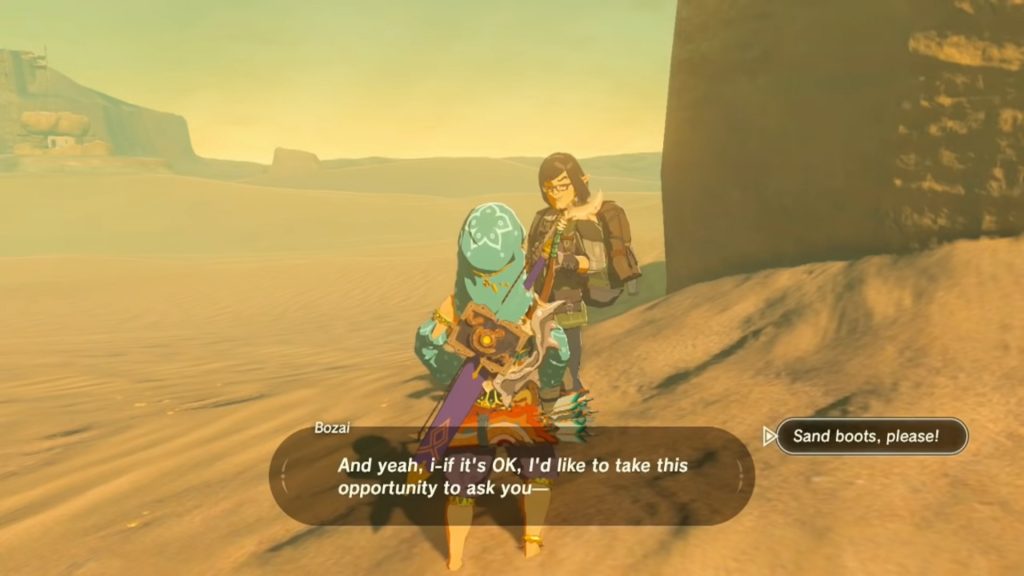 Take Bozai for example, who I cannot stand at all. Just noting that so you know this point is full of strong biases. He always rubbed me the wrong way sneaking around Gerudo Town like a creeper. Also, he calls Link, while dressed in the female Gerudo gear, by demeaning nicknames like Boot Monster. He’s gross. It’s not cute at all.

And Link recognizes this too. Link, who is in women’s clothes, barely gives Bozai the time of day and constantly cuts him off. Link treats Bozai as a means to an end to get the snow and sand boots. But that’s because Bozai treated Link the same way. He chooses the side quests as a way to get closer to Link and date “her.” Our hero is the one who comes out on top and gets two pairs of boots for his efforts. It also tells us the hero doesn’t give extra energy to someone who would treat women disrespectfully.

Every single person in Breath of the Wild gives us a chance to explore who Link is as a character. He makes really silly seal puns. He’s gentle and kind with Koko as they cook meals together. He creates music with the Rito children. He makes friends with Beedle and Kass. Link is happy, upset, gets weirded out at times, and grows through his dialogue. He’s not just the hero of the game. Breath of the Wild truly shows why Link is the hero of the people. 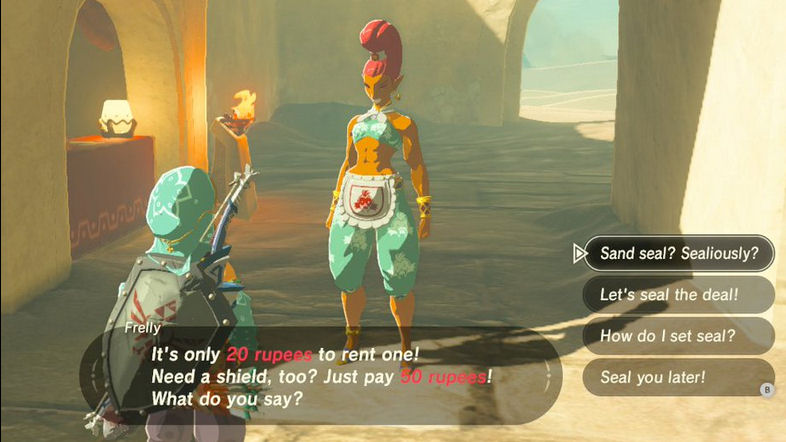 It made me want to see Link have a voice actor in Breath of the Wild 2. The thought of Link returning to his silent ways once more isn’t great. While silence is a choice Link made as we learn in the memories, the lack of Link speaking has reached a point where it doesn’t work anymore. Look at Age of Calamity. It’s really obvious and awkward at times when Link doesn’t speak. Everyone else is speaking for him or inferring how he might feel. Breath of the Wild showed that Link is very capable of speaking for himself. I don’t think we need full monologues from our hero. The occasional word or sentence here and there would be a perfect baby step going forward.

On the 35th anniversary of the Zelda franchise, I think it’s time to give Link a true voice. More than just his sword swinging battle cries. Give him words, choices, and laughter. Let him voice his displeasure or allow him to disagree. Stop letting other characters tell his story. It’s time to let Link be his own character with his own words.

Because it means a lot when the hero treats queer characters, like me, with respect.

If you wish to hear me discuss this point on video, I talked about it on my friend Rob’s show, Order 42.