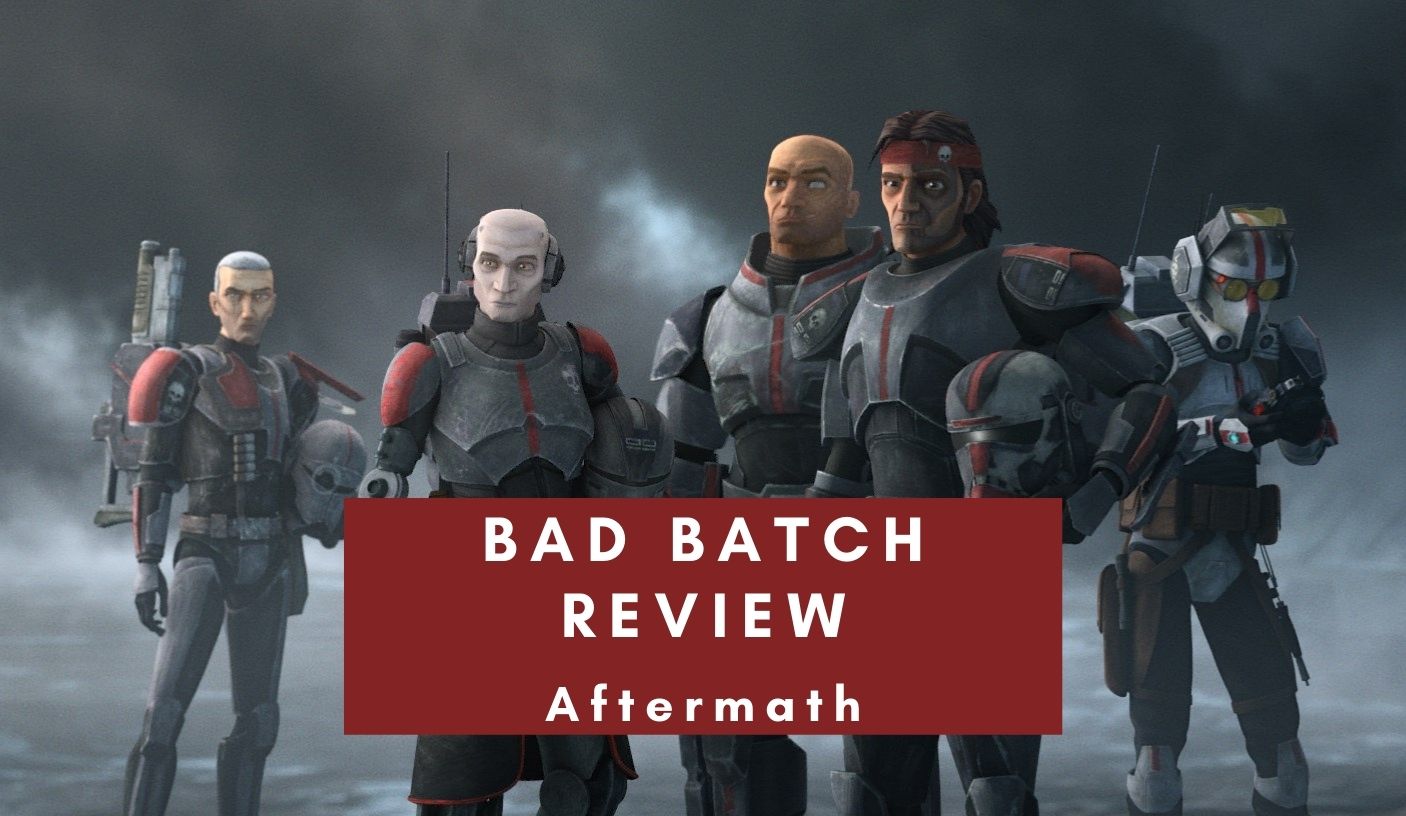 This review has major spoilers for The Bad Batch episode “Aftermath”

Star Wars animation, my first love of this franchise, is back with The Bad Batch. The series launched with the 72-minute opening episode “Aftermath” which was pretty much a mini-movie. So how did it do?

I thought The Bad Batch came out swinging and had a strong premiere. I’m always a bit biased as animation is my favorite medium. Clone Wars was my entryway into the fandom. I adore the prequel/early Imperial era of the franchise, and I can never have enough of it. So I was already pretty excited going into this show.

Probably my favorite thing about The Bad Batch is we’re already getting to know the characters better. With their arc in Clone Wars, they were very much caricatures with their introduction using a ton of shorthand to tell the audience everything they needed to know in the shortest amount of time. In “Aftermath,” we’re already getting to know these characters better. Hunter, for me, got the most improvement. I always found him a bit bland and boring in Clone Wars. Unlike his brothers, his skills aren’t the most apparent. Hunter got to shine in the opening episode, really defining who he is. Especially watching his bond with Omega grow into the found family narrative.

I think Omega had a pretty good introduction too. It was very much in the same sort of tropes that Ezra, Ahsoka, and Kaz from previous shows went through while fitting in with a new group of people. Omega is different though as she has a more familial bond with the Bad Batch. While I have my theories about who she might be a clone of (Palpatine), she is still a clone like them. Clone Wars really showcased the band of brothers narrative. Now, the Bad Batch has a little sister to look out for which is a very Star Wars story. 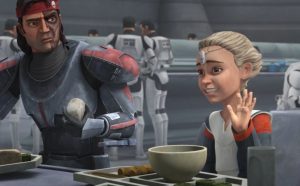 I’m waiting to see more Omega over the coming season. I think she’s fine at the moment. While adorable as hell and I’m always a sucker for big gruff men having to take care of a small child, Omega didn’t leave me with a strong feeling one way or another. I am looking forward to getting to know her more. I think she is a really fun addition to the group.

The drama and the setting of The Bad Batch are truly where the series shined. Watching Hunter slowly realize Crosshair’s betraying them was fantastic. Palpatine’s dictator speech was chilling. Order 66 will always be a wellspring that Star Wars can go back to for some intense writing. What made this story interesting was getting it from the clones’ perspective, with the Bad Batch being confused at sudden changes around them.

To heighten it even more, they had to throw Kanan Jarrus from Star Wars Rebels in there.

The inclusion of Kanan gives me some mixed feelings. On one hand, it was a lot of fun seeing little Caleb Dume with his master, Depa Billaba. I screamed when I saw Depa and knew Kanan was going to be nearby. Even for a few minutes, it was so much wonderful to see their dynamic together.

Though, their appearance left me feeling put off for different reasons. The Kanan: The Last Padawan comic covered this story already. That’s a pretty damn near perfect comic that’s gorgeous and heart-wrenching. By itself, it’s not a big deal. But in the last year, we’ve had three occasions where television has changed a book or comic story. First, it was Clone Wars changing the Ahsoka novel, second was Cobb Vanth’s story in Aftermath and The Mandalorian, and now this with Kanan’s Order 66 tale. Personally, I don’t mind the change as long as it’s done well. The first two mentions are some of the best Star Wars ever created. But personally, I have a lot of issues with Kanan’s handling in The Bad Batch which makes it suffer for me.

Before jumping into those issues, I do want to point out one thing. While onscreen Star Wars always takes precedence over books and comics, the wonderful crew of Broaxium podcast pointed out a very important point while on Star Wars Explained discussing the episode. If movies and television are going to constantly override books and comics, then why should fans invest in these ancillary stories at all? It’s something to think about.

So my issues with Kanan and Depa, right? One is a personal pet peeve of mine in Star Wars. I understand it’s 100% a ME problem. But in a huge galaxy full of trillions of beings, somehow the same twenty people seem to run into each other. Now again, I don’t mind it if it’s executed well. Having Kanan there holds so much more weight than it would if it were some random Jedi and padawan. This is a decision that I really like because it adds to the episode. But overall, it falls to execution, which I don’t think was very good. 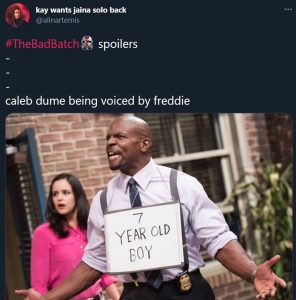 Don’t get me wrong. It’s so great to have Freddie Prinze Jr. reprising his character from Star Wars Rebels, but they couldn’t pitch up his voice? He sounds like a 40-year-old stuck in a teenager’s body. I find it hard to believe that one of the richest studios in the world which has been nominated and won awards for sound design and editing couldn’t make Freddie sound like a teen. Was the voice director sick that day? It was silly. It completely took me out of these very serious moments.

Also, why is Kanan white? Why is Depa’s skin lightened? None of this okay. You might not be aware of this, dear reader, but Kanan is not a white character. Lucasfilm’s Pablo Hidalgo has stated that all human members of the Ghost crew in Rebels are not white. Kanan in The Bad Batch looks more like Cal Kestis than his Rebels and comic counterparts as one Twitter user noted with images. 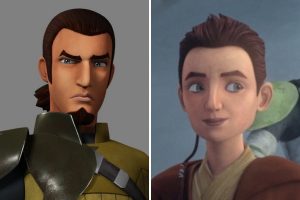 So why is this a big deal? For one, there were already a lot of fans pointing out whitewashing in The Bad Batch prior to the series. Think pieces were floating around the internet weeks leading up to the premier. It’s not a great look having the “desirable mutations” clones all have lighter skin. Especially when the clones have always been characters of color based on Temuera Morrison as a Māori man. Project Stardust did a great job deep diving on that if you want to read more. Now with Kanan clearly whitewashed and Depa’s skin lightened from her live-action counterpart, it’s pretty jarring and really took me out of the scene. I don’t know how this choice made it through several animators and no one spoke up.

Especially because it’s the same company that did Star Wars Rebels. They don’t have Kanan’s skin tone on a file somewhere? There are no excuses for any of this.

But this criticism is about the animation of The Bad Batch. The story being told is still a good one. Hunter failing to talk Caleb down from the cliff was a fantastic moment. Crosshair’s writing in particular is well done too. Immediately as Hunter and Crosshair are trying to find Caleb in the woods, you start seeing those glimpses that Crosshair’s inhibitor chip went off. The episode slowly pushes him away from his brothers. I had hoped for dramatic storytelling that one of the Bad Batch members would have stayed with the Empire. I never thought about the angle that they would be forced against their will to stay.

This opens great potential for dual storytelling, one that would really mirror Tam’s arc in season two of Resistance. While we can stay with most of the Bad Batch group to see how the galaxy is changing under the Empire, Crosshair is our inside look. Through him, we can see how the clones get ousted from their role and left behind for stormtroopers. This is exciting storytelling that I’m looking forward to.

The world building was excellent in the series as well. As they arrive back on Kamino, you can see the individuality leaving the regular clones. Most of them are donned in white armor. They have their standard haircuts. Even Crosshair gets black armor at the end to show his loyalty to the Empire, not Clone Force 99. The politics of Kamino in the Empire is another point I am looking forward to as well. The Kaminoans purpose and income from the Republic are over. How will they play into the story at large? Every scene with Tarkin had me at the edge of my seat. I can’t wait for more. “Aftermath” did an excellent job setting up all these threads.

Here are some random thoughts I had to round out the episode:

-Opening with Tom Kane as the voice of war stabbed me right in the heartstrings. After he suffered a major stroke a few months ago, this might be Kane’s last Star Wars project. It really made the opening seconds special.

-Wrecker and his stuffed Tooka doll Lula warms my heart, cleared up my skin, and gave me reasons to live. What precious scenes. Also, Wrecker smacking Crosshair in the face with Lula was excellent!

-STOP SHOOTING AZI IN THESE SHOWS! AZ went through the wringer with Fives in season six of Clone Wars. Here, he got stunned again and left behind! Poor boy just wants to do his job and have friends! Leave AZ alone!

-Omega mimicking Hunter is the cutest thing. I’m glad other fans are pointing out the Miles Morales mirroring Peter Parker scene from Spider-Man: Into the Spider-Verse as a comparison, because that was my first thought too.

-We need more food fights in Star Wars. That was a ton of fun!

There’s so much potential for The Bad Batch as the season progresses. I’m looking forward to getting to know the Bad Batch and Omega more, seeing the amazing cameos I’m sure to pop up, and find out what’s next for the show. “Aftermath,” while not perfect and there are issues that need to be transparently addressed by creators, was a solid episode. I can’t wait for episode two later this week.