The second episode of The Bad Batch “Cut and Run” was truly the culmination of all Star Wars television that came before it. It touched on the four previous shows in one way or another showcasing how far this crew has come from their animated beginnings in 2008.

We touch on Clone Wars with the return of Cut and Suu Lawquane along with their children Shaeeah and Jek. Their inclusion into the series made me so happy as “The Deserter” is one of my top favorite episodes of Clone Wars. I always adored this little family while wanting to see more of them.

“Cut and Run” brought them in for a very necessary episode. This meshed Clone Wars characters into a narrative that felt like The Mandalorian. Both are about gruff men having a child thrust into their care, suddenly having to be awkward dads. Where, to me, The Bad Batch differs is in the choices of the characters. Din took on Grogu first as a job and then as a personal quest given by the Armorer. Like Din, Hunter took on Omega wanting to protect her.

Where “Cut and Run” breaks away is in the choices of Omega and her new family. Grogu could only speak to certain people, Din not being one of them. Din had to rely on Luke and Ahsoka’s words. Here, Omega gets to make her own choice with her own words. She voices her wants to Hunter and the Bad Batch and chooses them. To me, as I stated in past reviews, it felt like Grogu was doing what everyone wanted him to do. But with Omega, Hunter accepts her wants and now the show can move forward. The Bad Batch can now start making its way as its own show.

Omega’s choices really cemented my love for her. The symbolism of her removing her headband, an emblem of her past, at her lowest moment thus far was her letting go of her old ways. They can all now progress together as a unit and a family.

Cut is a fantastic mentor for our Bad Batch group. Saving Omega from the nexu really drove home why he was a perfect choice. As a free-thinking deserter, he’s different in his own way which allows them to trust him. He’s patient and shows our new Dad Batch how to act with a scared child. Cut more than likely had a moment like that with his kids where Suu had to teach him. Understanding being thrown into parenthood for the first time while coming from a solider background, Cut was a fantastic addition to the story providing the characters what they needed.

If this episode hadn’t happened so early in the series, the rest of the season might have played out like The Mandalorian season two where we wondered whether or not the Bad Batch would actually keep Omega or try to find her a better life. Star Wars Rebels did this as well in early season one with Kanan looking for a master for Ezra.

Speaking of Rebels, “Cut and Run” also focused on a fantastic type of worldbuilding that Rebels and Star Wars Resistance excelled in. Clone Wars started it, but every show since has gotten better and better at it. They building the changing galaxy into action and dialogue as well as showcasing it in moments in the background. Rebels did this often with propaganda playing in places like Old Jho’s cantina. Resistance did a hell of a lot of world-building for the Sequel Trilogy through Kaz’s actions and dialogue such as focusing on the demilitarization of the New Republic prior to the First Order invasion. The Bad Batch continues that trend as our protagonists witness a changing universe. 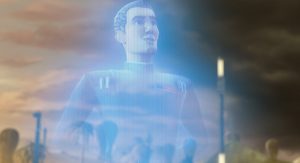 The hologram of Vice Admiral Rampart informing citizens about chain codes was brief but kicked off the hurtles of the episode. There was also a bit of a Solo feel with the end battle around the check-in booths. Every piece of dialogue holds weight threading together the changing galaxy. It’s not just with our protagonists but also with characters in the background trying to live their lives as fascism slides into place, which is a very Resistance kind of storytelling. Especially when it comes to screaming out losing their rights to, you know, exist freely.

I’m not surprised either. It was something I had predicted in an earlier speculation piece. It’s very clear that Jennifer Corbett, as head writer and show developer, is bringing her experience from Resistance into The Bad Batch. Friendly reminder, she never worked on Clone Wars or Rebels. So far, this show has flexed in its character interactions which is exactly what Resistance was as a slice of life Star Wars story in a changing galaxy from peace to wartime. Bad Batch is following suit from the Republic to the Empire.

Omega is that character experiencing the galaxy for the first time. She is very much in the same vein as Ezra going into space or Kaz stepping out of his privileged life into a new class system. Only Omega is truly unique, having a full Rapunzel from Tangled moment experiencing dirt for the first time. Which was a very Star Wars feeling. I heard Yoda’s words in that moment as Omega, a child, found such joy and wonder in something so simple.

I really enjoyed watching Omega’s growth in “Cut and Run.” Gosh, Star Wars animtation writes children and teenagers so well including one who has been sheltered for her entire life. Omega not knowing what playing was broke my heart, because it implied back to what every clone had gone through. They were bred for warfare. They probably didn’t get to play many games or have downtime with balls to toss around. Seeing Omega get to be a kid was a joy.

Now as we move forward with the series, I hope we see Omega have time with the rest of the Bad Batch crew outside of Hunter. She’s forming a relationship with Wrecker. Tech actually treats her with the same agency as the rest of the team. So, I guess I want to see her more with Echo. He was the one who voiced to Hunter in the opening moments wondering what they were going to do with a child. These men are also leaving behind the only life they have ever known. As Omega grows, they need to change with her. She needs to bring out the best in them, and I’m excited to see their growth.

Here are some random thoughts I had to round out the episode:

-Fauja the Aleena was so sassy. I love her. It’s also great that she was voiced by Nika Futterman. Nika might not get to voice Asajj Ventress anymore, but I’m always happy to hear her in Star Wars.

-It was really cool seeing Tech and Echo get some time to shine on their own. It also showcased that their abilities are different from each other.

-I also love that Echo still wears a kama with his uniform. It’s a fantastic callback to his ARC trooper days with Fives.

-I’m ready to check back in with Crosshair. This was a needed episode to get everyone on the same page. It’s time to see what Crosshair has been up to.

-SUU IS AMAZING. It was so awesome to see her in action and shoot the nexu. I always loved her character, and she really got to shine. Also, her being that support for Cut in the last act was fantastic. Every time he got nervous, she was there to take his hand, smile at him, let him know she wasn’t leaving. She’s a fantastic wife. I want to see her again.

“Cut and Run” really was the culmination of all the animated shows that came before it. Now as The Bad Batch forges forward, I’m ready to see it becomes its own beast.