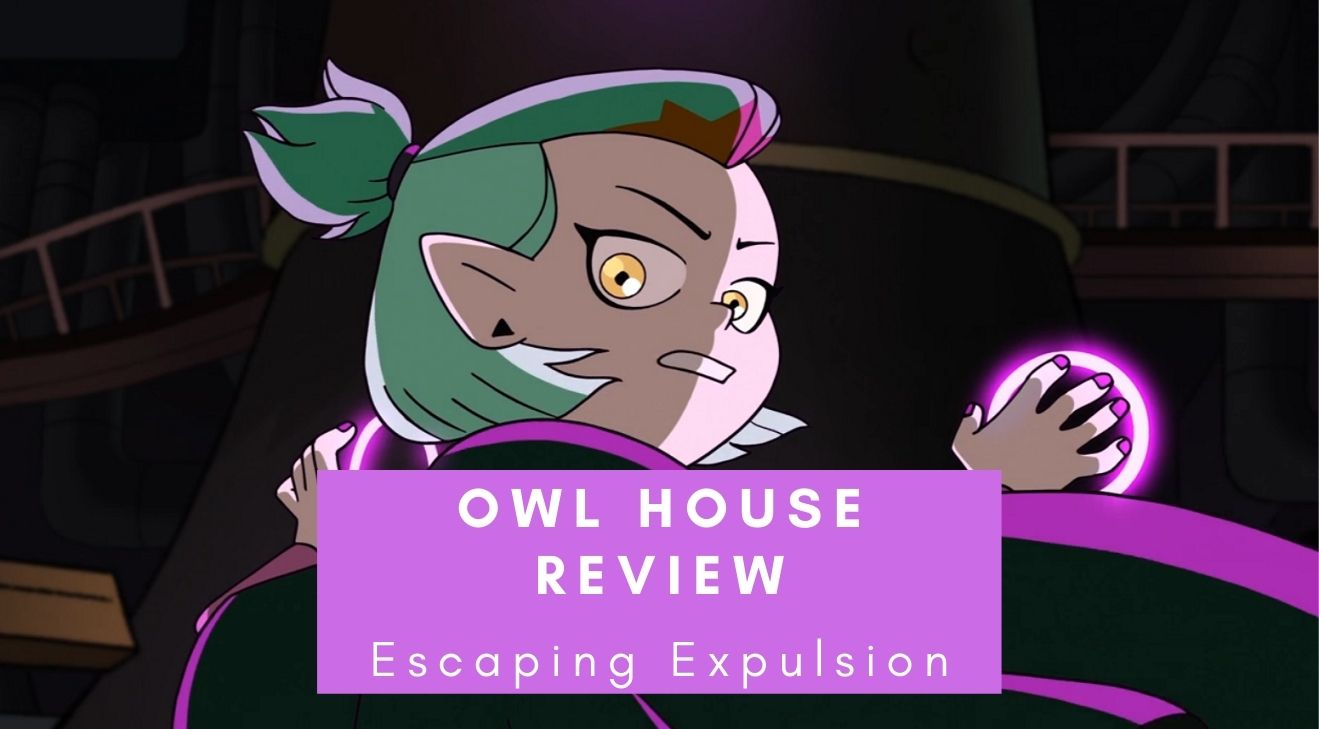 This week’s The Owl House episode “Escaping Expulsion” brought back the best written character of the show: Amity Blight. We also finally get to meet her parents, Odalia and Alador Blight, and boy are they hitting those Harry Potter tropes hard this week! The Owl House has never been shy about poking fun at J.K. Rowling’s creation and now the series has its own version of the Malfoys.

Owl House is everything I wish J.K. would have done with her characters by making them more nuanced and less black and white. We know that Draco is not a bad kid and stuck in a system forced on him by his parents. But it’s not until the end of the seventh book and fully in the The Cursed Child, which some fans don’t count as canon, that we see a Draco on a redemption path and fully redeemed. We, as the reader, don’t get to see his process as the books are almost entirely from Harry’s point of view. Therefore, it’s also a biased view. 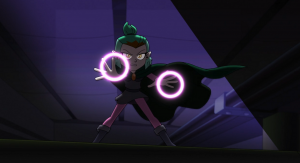 Since season one, The Owl House has taken loving care to show why Amity came off as a bully. They set her up as an antagonist to Luz and explained why she saw Luz as a threat. Then, we start to get to know Amity. We met her older twin siblings, Edric and Emira, who have far more freedom than Amity. She bears the weight of their parents’ expectations. We find out that her parents chose Amity’s friends based on status, making Amity push Willow out of her life. And they took the time to show how she went from animosity towards Luz to opening up about her life and becoming willing to make choices outside of her family. They went full “enemies to lovers” trope in a single season.

Draco Malfoy wishes he was written as well as Amity Blight.

“Escaping Expulsion” gave us a new step in Amity’s journey. She shouted five words that set her apart from her family, “Stay away from my Luz!” Amity showed her parents what mattered most to her. It wasn’t their status or money. It was Luz, Willow, and Gus. Seeing Luz in danger made Amity rip off the pendant that her mother used to control her and smash it. She drew a clear line in the sand saying she wasn’t going to let them manipulate her anymore. It was an amazing moment that was built up so well for the last season. 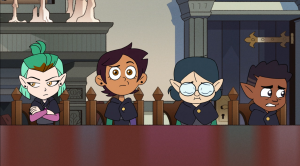 And look, there will probably be some backsliding for Amity. At the end of the day, Odalia and Alador are still her parents. She has to live with them which sets up her struggling to keep this independence. Amity is still a teenager. She’s only fourteen. In fact, I hope she struggles with it and caves a bit under her family. It would make an interesting story to see how she grows.

Amity is the best written character in this series. “Escaping Expulsion” was just another step in what makes her amazing.

I know there are going to be so many think pieces about Amity in this episode, so I really want to tackle Amity’s parents. This is something that I know people will disagree with me especially because they came out with potential child murder in “Escaping Expulsion,” but hear me out: 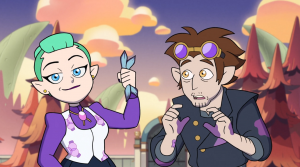 I don’t see the Blights as villains. I don’t even think they’re evil. Are they manipulative, controlling, stereotypical wealthy, and obsessed with status? Oh yeah! Totally! They absolutely are the worst! But I see them more as antagonists to Amity and Luz’s journey than villains. Sure, they’re extreme antagonists, but they are clearly not on the same level as Emperor Belos and the Golden Guard.

To use an example from another Disney show, the Blights to me are like Gideon from Gravity Falls. He was the main “villain” from season one, but it became clearer as the show went on that Gideon wasn’t the Big Bad. As Bill Cipher became more of a threat, we see there are far worse things than Gideon wanting the deed to the Mystery Shack. Gideon is never fully redeemed either despite having some heroic moments. 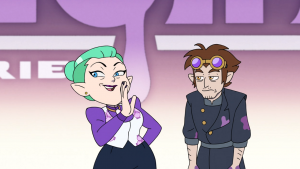 I can see the Blight parents on the same path as Gideon especially since series creator, Dana Terrace, worked on Gravity Falls. It could be similar to the Malfoy parents too as this series loves to rip on Harry Potter. I could see Odalia and Alador having a heroic moment or two to protect their children against the Emperor before returning to their sleazy ways a week later. It doesn’t redeem them, but it makes them interesting characters.

Especially Alador. While he has the aloof, tired, mad scientist vibe, it is clear he understands what is going on around him. He holds his wife to her promise to Amity to let the kids back into school. I feel like he is the dark horse authority figure of the family when needed. He’s going to be a fascinating character to watch.

“Escaping Expulsion” gave so much nuance to the Blights in the final scene when Odalia and Alador come face to face with the Golden Guard. It raises the question of why are they having private sales in the first place. They’re clearly trying to get around the Emperor’s rules in some way to make more money. It’s a bit of a rebellious streak against the laws of this world even if its for their own gain. 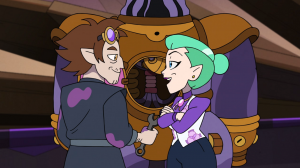 But the fear on their faces when the Golden Guard comes in says everything. They are scared of Belos just like everyone else. They know they’re breaking the law. The Guard calls them out on making a private army and seizes their work from them. And now, they’re roped into a contract to create soldiers for the Emperor. I believe this is where their heroic moment will come from. I can see Belos demand something involving their children, and the Blights have to choose between their obligation to the Emperor or their kids. It would be some dramatic storytelling if it happens.

I would love to see all the parents get involved more this season actually. We got introduced to Willow’s dads in this episode (I love them), and Gus’ father joined the mix last season. I feel that the parents could play an important role. Belos has only been in power for fifty years. They are probably the second or third generation to live under his rule. Their parents were possibly free and wild witches before the totalitarian regime took hold. I think the parents could add so much to the lore and story around the mystery of Emperor Belos. 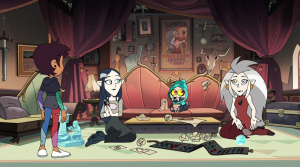 The B-Plot with Eda and Lilith learning glyph magic was fine. I enjoyed seeing Eda have to rely on her sister for help with magic. It’s a great way for them to further along the healing process between them. More than anything, “Escaping Expulsion” was using this plot to set up a lot of future stories. It’s so important that Eda and Lilith learn magic again. It was also huge world building that there are a limited number of glyphs that all magic comes from. Though, I wouldn’t be surprised to see another glyph or two revealed before the show is over.

Some random thoughts to round out Escaping Expulsion: 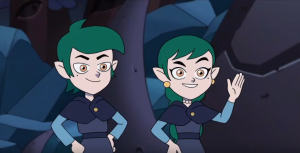 -I LOVE THE TWINS! I adore Emira and Edric every single time they’re on screen. I do hope they get separate arcs. After the Grom episode in season one, we see Emira wanting free of her brother. I want to see them be their own people on their own and break out of that Weasley Twin trope.

-Amity “Adorable Baby Gay” Blight ready to throw down for a picture of her girl crush is everything little gay me wanted growing up.

-I liked how they handled Gus’ voice actor, Isaac Ryan Brown’s, voice changing with the very simple line of “witch puberty!” It’s a magical world! It totally fits that witches go through puberty jumps over a week! It was a fun bit.

-It’s fantastic that at no point Luz takes out being expelled on Amity. She recognizes that Amity is just as much of a victim in the situation. That’s some pretty mature storytelling for Luz.

-I know it was played for comedy, but I love seeing Principal Bump’s reaction to the kids getting expelled and trying to sneak back into school. In the season one episode “The First Day,” Bump was ready to give his life to protect his students. Like the parents, I could see him playing a bigger role down the line when it comes to protecting the kids from whatever threat Belos could bring to his school.

-I hate that I was spoiled on Amity’s big moment though. While I didn’t know the context of the situation, it still took the surprise out of the climax when I knew it was coming. Please friends, don’t be a jerk and spoil things. It sucks. 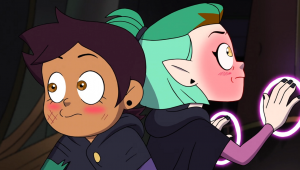 -LUZ BLUSHED OVER AMITY SAVING HER! She saw Amity come in like a freaking action hero, and Luz’s tiny baby queer brain went, “YES!” And my old lady queer hands clapped at how amazing it is that the next generation of baby queers gets such fantastic representation all in one show! Hell yeah!

-WILLOW’S DADS! THEY ARE ADORABLE! I’m glad they were voiced and together and on screen and clearly her fathers with no one questioning if they were her parents unlike other Disney shows (cries over Penumbra in Ducktales).

“Escaping Expulsion” brought the crew back together. Willow, Gus, and Amity are here in the season two mix. Now, we move forward into the unknown. I can’t wait to see what next week brings.

This article was originally posted over on The Geeky Waffle and has been reposted here with permission.