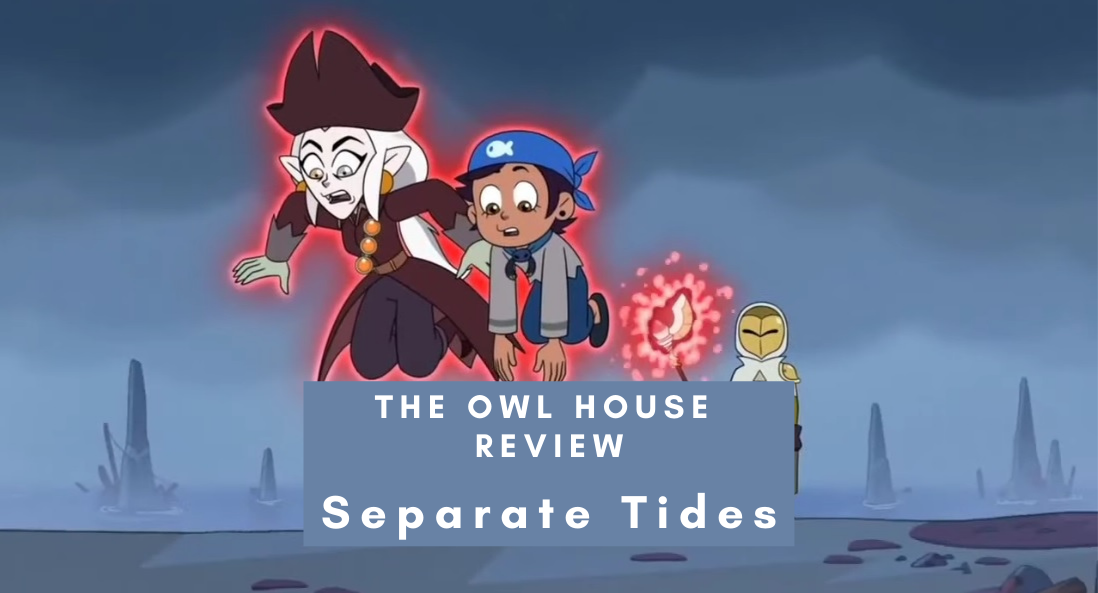 The Owl House is back kicking off season two with “Separate Tides!” Our heroes find themselves adapting to some new situations. Luz faces the consequences of her actions after destroying the portal to her home. Eda and Lilith struggle with the sudden loss of their magic. All of this plays out as a new villain arrives: The Golden Guard!

“Separate Tides” was a great episode to open the new season. It begins with Luz recording a video for her mother, Camila, catching her and the audience up on everything that’s passed. This is a fantastic way to show the new norm of the series. Luz’s self-confidence shines through, Eda is still just as resourceful despite having no powers, and Lilith is not at all okay emotionally. 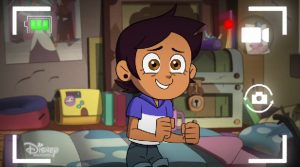 Luz’s strength has always been her unwavering self-confidence. But in “Separate Tides,” we’re seeing that crumble a bit as she’s faced with the consequences of her actions. As she speaks to Camila, there’s a small moment where she tells herself she must move forward before she puts on a chipper smile again. Luz destroyed her only way home, an action that not only took away her path to her mother but also stripped Eda of her job. This is on top of Luz blaming herself for Eda losing her powers too.

This doesn’t get Luz down at all. What makes Luz such a fantastic protagonist is her determination. She might pause at hardships as any kid her age would, but Luz refuses to let it get her down. Does Eda need money? Well then Luz will hop on a ship to go after a sea monster to make her mentor money! This also brings in the theme of “Separate Tides” which is knowing when to ask for help. Luz burdens herself thinking she has to fix Eda’s problems alone. Her pirate montage shows her throwing herself into an unfamiliar and possibly dangerous situation. Her judgment is so clouded by her drive to help that she stops thinking logically. This is where her self-confidence and determination become harmful. 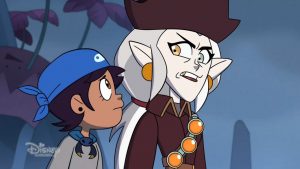 Luckily, this allows Eda to step in and show why she’s a fantastic mentor. I love that Eda doesn’t sugarcoat anything for her young ward. Eda plainly spells out that relationships will always be difficult, but the point is they must handle these things together. Luz made Eda a better person. Eda cherishes that more than any of the negative stuff that happened on the journey. Eda wants to be in Luz’s life and to guide her. It’s a good reminder, as Hooty screamed out, that “No witch is an island.”

A side note before moving on: I love seeing Luz’s growth as a witch. The pirate montage and fighting the Selkidomus showed how resourceful Luz has become. It’s a skill she’s picked up from Eda. Being human, she is always at a disadvantage having to do magic differently. Seeing Luz figure her way around her own limitations is so rewarding as a fan watching her journey. I suspect that Luz will be a powerhouse by the end of season two as we move into season three.

Luz’s story foils well with Lilith’s struggle. “Separate Tides” has a lot of great callbacks to the season one episode “Agony of a Witch.” Lilith knew that Eda worked twice as hard as her, so Lilith had to be craftier than her sister. Being a victim of propaganda, as we’ve seen with other characters like Amity and Willow, led Lilith to make decisions she immediately regretted. For years, she realized her choices were what defined her career and who she was as a person even though she sought a way to fix her sister’s curse. Now that she’s stripped of all of her magic, Lilith has no idea who she is as a person anymore.

This is a wonderful setup for a season-long story for Lilith on two fronts. She allowed her career to be her self-worth which no one should ever do. A person’s worth must come from how they define themselves, not from other people. The other journey is her redemption. Lilith’s entire drive in “Separate Tides” is looking for ways to undo thirty years of hurt. Yes, Eda will always love her sister and offer her a safe place. But it’s also clear that Eda is holding Lilith’s betrayal over her. Lilith has to work for Eda and Luz’s trust and forgiveness. It’s fantastic to see Lilith push to try and right her wrongs. Good redemption arcs can be difficult and oftentimes are mishandled (stares in Star Wars). The Owl House has given Lilith a strong foundation to start this journey.

Which led to the surprise that Hooty of all people is bonding with Lilith! I loved this story. First of all, Hooty is one of the best characters on the show. He’s been used up to this point for one-liners, comic relief, and nightmare fuel. I was so happy to see him get a big role in helping Lilith with her struggles. Being stuck to a house at all times, Hooty constantly has to ask for help which is why he’s the perfect person to teach this lesson to Lilith. He is also possibly the biggest dark horse of the show. We know he’s a demon, but we’re not sure quite how powerful he is. It would be a great storyline to see Hooty and Lilith’s bond grow to help them both unlock their full potentials. 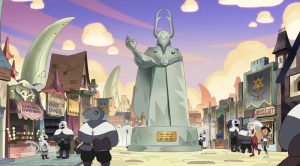 Something I briefly want to touch on is how fast the people of Bonesborough returned to their normal lives. In the last episode, the people of the city were ready to riot for the cruel treatment Eda faced with her almost death sentence. Now, only a week has passed since the season one finale. We see that the Emperor in that time period has upped his soldier patrols and propaganda machine. The magical fascism of this world is tightening its grip in their lives. But the people of Bonesborough are just sort of fine with all of this which was so jarring to see.

Perhaps this was so jarring because of the last year we’ve had. Last summer, we saw a global movement with Black Lives Matter after the death of George Floyd. But as the months passed, people just returned to their lives and complacency despite that little has changed since then. Perhaps this is the groundwork for a much bigger story that creator Dana Terrace and her writers are trying to tell about the dangers of being complacent as systemic problems are ongoing. Maybe I’m reading too much into it, but this series has done such a great job with how it handles propaganda. I wouldn’t be surprised if there is something more to it. 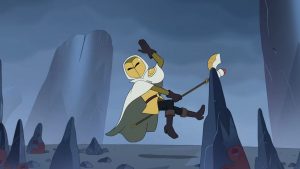 Finally, I have to talk about the Golden Guard. Voiced by Zeno Robinson (Big City Greens, Pokemon Journeys), the Golden Guard came in with such a bang. There is so much mystery around this person since he was first teased back in September in a livestream when Dana Terrace drew the top half of his face. We’ve only seen his hair and eyes, so there is definitely something hiding behind that mask. 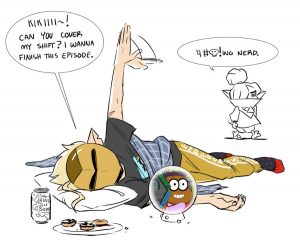 “Separate Tides” gave the Golden Guard a solid introduction. Anyone who knows me knows I love a good villain. Despite the mystery around him, he’s so funny and charismatic. But they also don’t lose his casual cruelty as well as he threatened to drown King and throw Eda and Luz into the boiling seas. While being opportunistic, he is still a servant of the Emperor and is there for blood. They show a touch of his magical power, his whimsical personality, and his laziness. Yes, he is a lazy character which is a great villain trait. Terrace teased the Guard’s lazy demeanor in promotional artwork leading up to season two’s release. I love a villain who is actually quite capable and smart while sometimes not really feeling up to “being evil” today and just wants to watch their tv shows.

I am here for this golden man. Terrace said this is her favorite character of the show, and so far, the Golden Guard has become a new favorite of mine as well.

Random thoughts to round out Separate Tides: 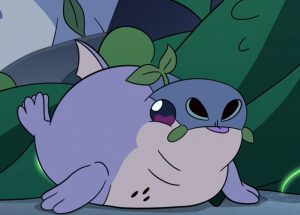 -The baby Selkidomus is so freaking cute. This show continues to have A+ creature designs.

-I loved the mirroring moment of Luz acting out The Good Witch Azura opening from episode one. That was a fun callback!

-On the bounty hunter board in town, the Bat Queen posted a help sign looking for babysitters. That was fun to see. I can’t wait to get the Bat Queen back again. She’s one of my favorite characters.

-Lilith screaming, “I AM A WITCH UNHINGED” at a bunch of bees was fantastic.

The Owl House truly came back with a bang with “Separate Tides.” I am so excited to be back and see what the future of season two has in store for us as we move into the darker middle chapter of this series.

This article was originally posted over on The Geeky Waffle and has been reposted here with permission.