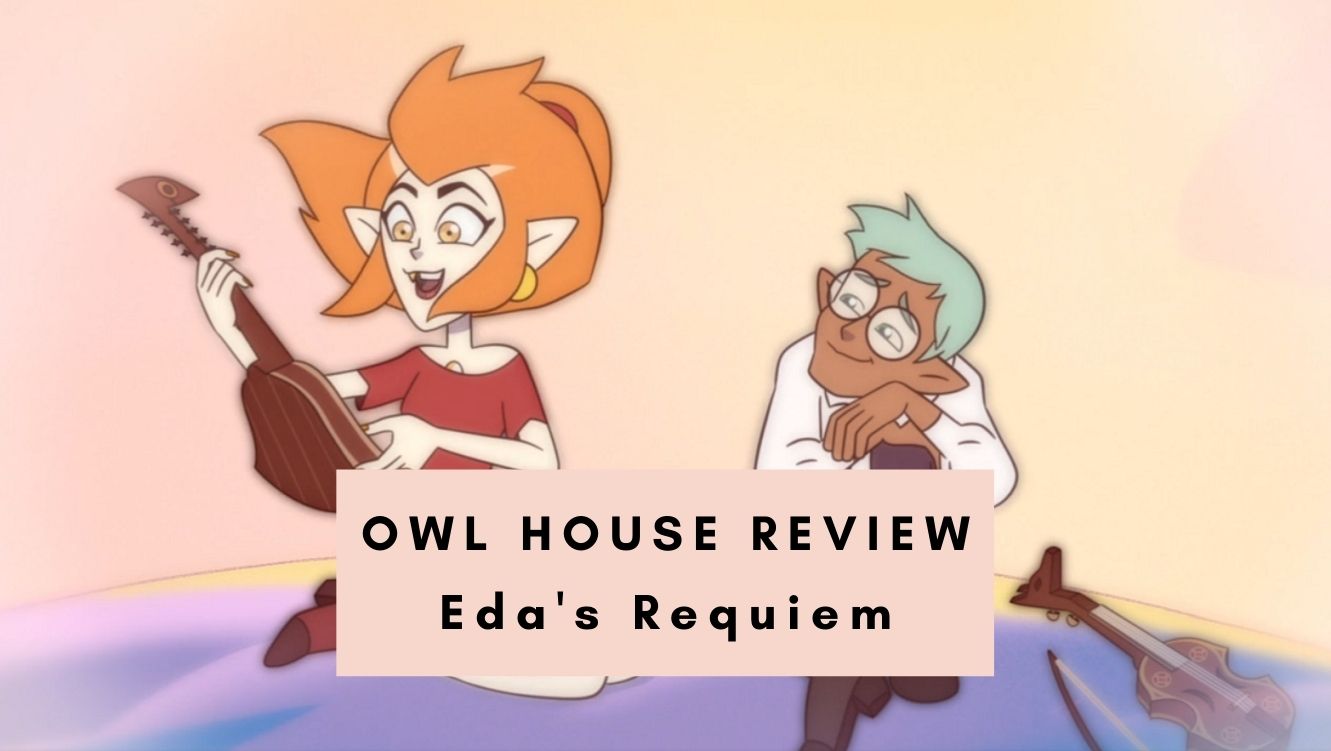 This week The Owl House continued on its spectacular second season run with another phenomenal entry with “Eda’s Requiem.” We got to see Coven Heads in action, Eda faced an emotional crossroads fighting a future without Luz and King, and by far the most important development of all:

EDA HAS A LOVE INTEREST! AND THEY ARE SO FREAKING CUTE TOGETHER! 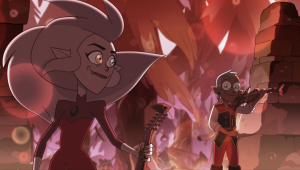 We’re introduced to Raine Whispers who is not only the head of the Bard Coven but also is the love interest for Eda. They are such an important person as they look to be the first nonbinary character on Disney Channel. Also, they’re voiced by nonbinary voice actor Avi Roque who is a fantastic addition to an already wonderful cast! This is the second time The Owl House has broken new ground for queer representation, the first being Luz as the first bisexual lead on the network. Also, “Eda’s Requiem” confirms Eda as a queer character too with Raine as her love interest. This show continues to push the boundaries for animation. It’s no surprise why fans have been promoting the Twitter hashtag #SaveTheOwlHouse for over a week now.

Raine is also a fantastic character too. They have such ease in their presentation in “Eda’s Requiem” and are shown to have stage fright when performing. This would make it easy to think they’re weak. But the moment they take up their instrument, Raine is the most powerful person in the room. The Bard Magic is so fascinating because they can disrupt other people’s abilities with sound waves. Raine slices the strings of his instrument and throws blades of music. It’s so unique and I love seeing this fighting style. 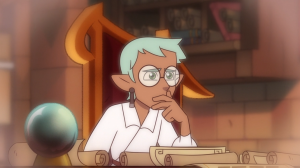 This also allows for a ton of visual storytelling. “Eda’s Requiem” lets Brad Breeck’s amazing soundtrack do a lot of the work. The music this week was insanely good. Some scenes had little to no dialogue just letting the score tell the narrative. I love a show that trusts its young audience to follow along without holding their hand. These are very skilled creators.

Last week I discussed how I thought it was odd that all the coven heads were for Belos’ plan and there had to be some dissenters. I was right as Raine fills that role. They were disgusted the moment they realized that the Emperor was hiding information and enslaving his citizens. Raine showcased a different kind of bravery. Where Eda is flashy with her rebellion, Raine subtly infiltrated the ranks of the Coven until they because the head of it. They knew they would find out more from the inside and could do more damage. Last week, they got a firsthand look at Belos’ plan for the Day of Unity and can now fight back against it. 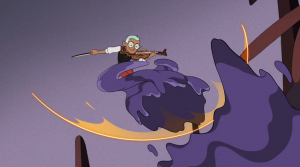 I enjoyed seeing Raine’s reaction to Belos’ teachings in comparison to Lilith. I have to wonder if Lilith didn’t have doubts about the Emperor’s doctrine because she had her full range of magic being in the Emperor’s Coven. Raine had their magic restricted to one skill set being Bard Magic. It allowed them to feel first hand getting weakened by the Coven System. Lilith, on the other hand, thrived. She never had a reason to think otherwise when she was empowered while Raine’s abilities had been stripped away.

Eda and Raine are so adorable together. The creators used a lot of the visual shorthand in “Eda’s Requiem” previously presented with Luz and Amity’s forming romance. I loved the flashbacks showing them falling for each other. Seeing young Eda with her fiery red hair is always a treat to watch the vibrant young woman she was before the curse claimed her. While their paths took different directions, they picked up where they left off with their gentle flirting. Raine cares so much for her, and they might be just who Eda needs as she faces her own emotional crossroad. More on that in a moment. 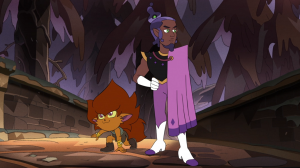 “Eda’s Requiem” also showcased two other coven leaders with Darius, Head of the Abomination Coven, and Eberwolf, Head of the Beast Keeping Coven. Now, these two are exactly who I expected to be working for Belos. They’re incredibly cruel, vain, and love to abuse their power. They’re also monstrously scary. Like Raine, they showcase how powerful a Coven Head is. Belos dominated as the indomitable villain in the season one finale. Now, we see the Coven Heads are just as formidable. Stopping the Emperor’s plan is way more complicated than ever before. I have to assume that most of the Coven Heads are aligned with Belos. When introduced last week, Raine was the only one not smiling. This has to be a cue that they were alone in their feelings. We’ll have to see though. This season has been chocked full of twists. I wouldn’t be surprised if there is one or more that will eventually side with Raine.

Continuing a story thread from last week with Hunter, the Coven Heads don’t seem to like Kikimora just like the Golden Guard. Darius and Eberwolf soured seeing her capture Raine in the end after all of their hard work. More and more, it seems like Belos’ kingdom is crumbling from the inside which makes him a more desperate character. And desperate characters tend to be the most terrifying because they have nothing left to lose. 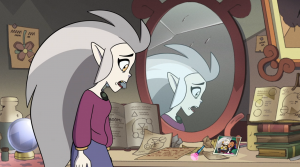 Outside of her romantic interest, “Eda’s Requiem” brought Eda to a point in her character arc that she’s been avoiding for some time. Soon, Luz will return to the human world and King is searching for his father. What does that mean for Eda after everyone in her life is gone? It’s quite a nuanced story while dealing with very the very commonly found family trope. Eda raised King. She’s Luz’s mentor. The episode opens with her coming to terms that she’s neither of their birth mother making her run from her responsibility to them.

Raine, being such a good partner, makes Eda face her fears. They ask her point blank if Eda has children at the moment where they were both willing to give up their lives to stop Belos. They say that Eda can’t just toss her life to the side. It would have been a selfish choice when she had others who relied on her. In the end, it’s heart-wrenching watching Eda make the choice between her kids and the person she loves. This showed Raine’s strength as well. It wasn’t in their magical prowess but in their strength of heart. They let go of Eda’s hand and chose to be captured so Eda could continue being a mother. “Eda’s Requiem” left me in tears!

It made it so bittersweet when Eda had to put on her mom face. Shoeless, battered, in tears after letting go of the person she loved, Eda stopped herself long enough to push back her emotions for her kids. Luz and King needed her support and she shoved aside her own hardships for them in a single quiet gesture of personal strength. 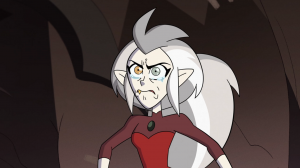 “Eda’s Requiem” is very much coded with real-world stories of adopted children. Eda in a lot of ways reminds me of my sister when she took in my nephew and became his guardian. It was often an emotional struggle for her when my nephew’s birth mother was still out there, sometimes he would have to leave to see her. It was a big hardship, but such a rewarding one. My nephew chose my sister as his mother while respecting that he had another one too. Both were his moms in different ways. Now, I’m not saying that Luz is going to pick Eda over Camila. Luz’s arc this season has been focused on her getting home. But Eda sees Luz and King as her children while wanting to respect the boundaries of their birth parents. It’s such an important story to tell. Birth relatives aren’t the only parents for a lot of children. I can only imagine the importance of Eda and Luz’s relationship to those young viewers.

King made some huge declarations too, deciding to take Eda’s last name of Clawthorne. He might be looking for his father, but Eda won’t stop being an important part of King’s life. He chooses Eda, Luz, and, to a lesser extent, Hooty as his family. After watching Eda slog through such emotional turmoil, it was wonderful to see her feel that support from her kids. 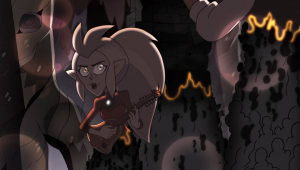 The last thing I wanted to touch on in “Eda’s Requiem” is the weaponization of Eda’s curse. Playing magical music together, Raine and Eda realized it could inflict damage on other witches along with themselves. We’ve yet to see the curse affect others outside of Eda with the exception of Lilith who split Eda’s curse with her. Is this dark wild magic possibly the key to fighting Belos? Is it a separate power from Eda as we know the Owl Beast is inside of her? Could she eventually release it and finally free herself? We know the Owl Beast is coming. The season two trailer showed it roaming in the Owl House, but that could be a dream or a vision which is when Eda usually sees it. This is a fascinating turn of events that I’m interested to watch play out.

Some random thoughts to round out Eda’s Requiem: 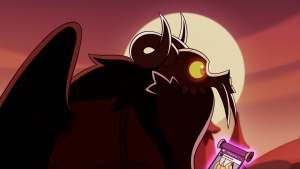 -The fanfiction girl from episode one is back! And she has a name! It was such a joy to see Katya again! And here she is fighting for her right to continue to write fanfiction! You write about food falling in love, Katya!

-KING’S DAD! We got to see King’s dad hearing his son’s message that King wants to meet him! It’s the briefest of scenes, but it is such a game-changing one!

-The animation as Eda and Raine played together was so gorgeous and smooth.  This crew is so, so good at what they do.

-Darius is voiced by Keston John, and I’ve adored his work since I first heard him in Star Wars Resistance as Marcus Speedstar. But my personal favorite will always be my baby boys Hordak and Wrong Hordak along with the evil Horde Prime in She-Ra and the Princesses of Power. I always get so excited to see Keston John in anything!

-Eberwolf’s social media name being “RAISEDBYDIREWOLVES” is hilarious. These creators are such nerds!

The Owl House’s second season keep delivery episode after episode, and “Eda’s Requiem” was no exception. It feels like a pot of boiling water simmering more and more. Eventually, things will boil over, spill out, and things will never be the same. Something will break in the next few weeks, and I can’t wait to see it.