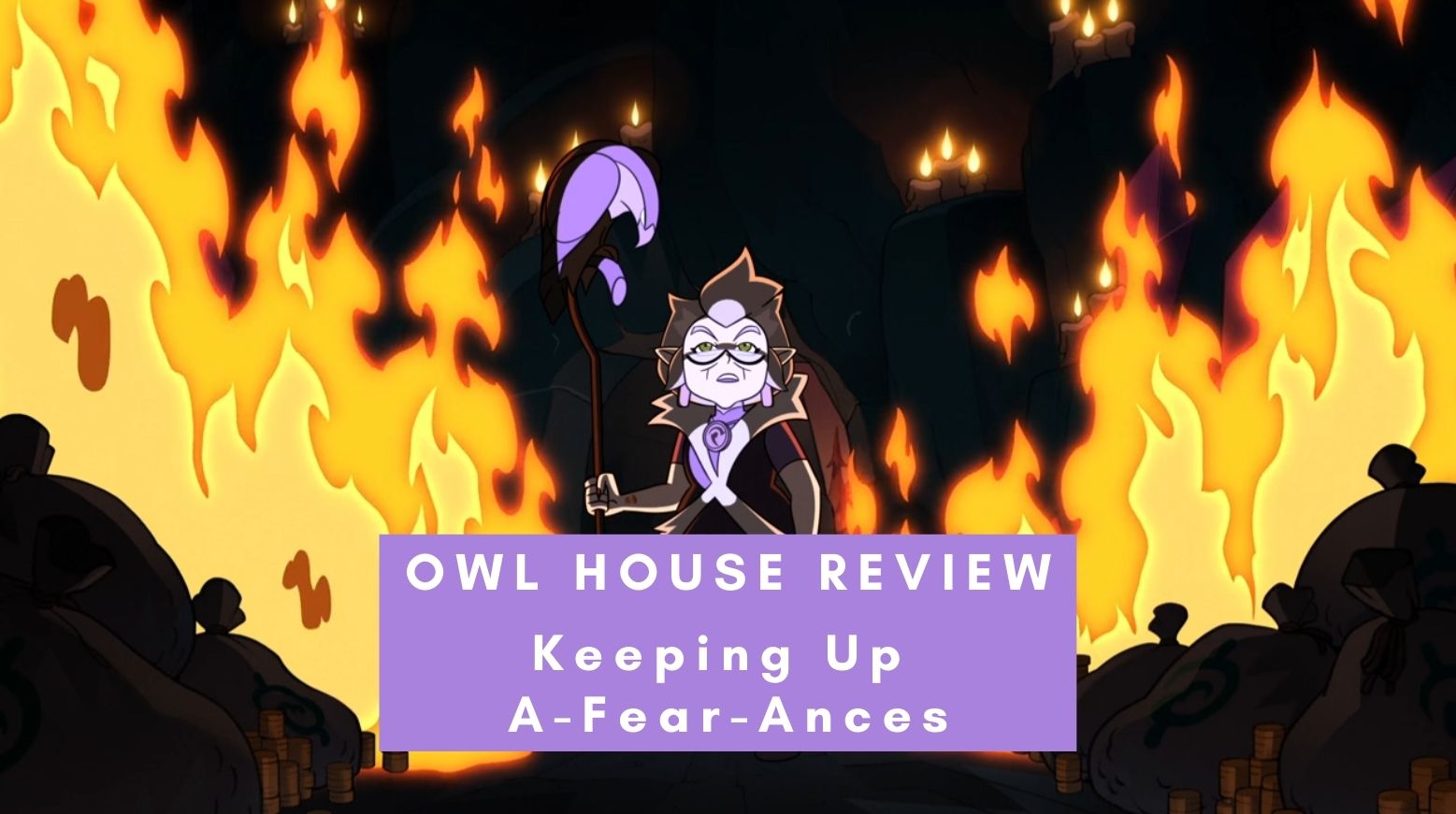 Where do I even begin with the new episode of The Owl House “Keeping Up A-Fear-Ances.” Eda and Lilith’s mother, Gwendolyn, makes her first appearance. The curse has caught up with Lilith. THAT ENDING that makes me so scared for Luz’s mother, Camila! So much happened in twenty-two minutes, so let’s get into it! 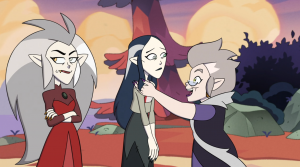 Eda’s curse has always been coded for someone living with mental health struggles or chronic pain. “Coding” in media is when the story doesn’t explicitly state or confirm something about a character but the subtext can be read as such. In Eda’s case, they use a lot of dialogue similar to people who struggle with mental health issues. “There is no cure.” “The curse acts stronger when you’re stressed.” “I’ve learned to manage it.” All of these phrases can be applied to things such as anxiety, depression, bipolar, and more. It’s such an important story for both kids and adults to see a character like Eda work through her curse and still have a happy and healthy life. “Keeping Up A-Fear-Ances” is another stellar example of animation normalizing these kinds of topics.

Now, the curse has been split with Lilith, and she’s experiencing the effects of it for the first time. This is a huge step on her own redemption arc. She is feeling firsthand the pain she caused her sister. Finally able to empathize with the horror her sister had to live with, Lilith reached an important moment in her continuing journey. 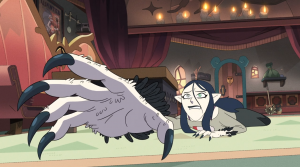 But “Keeping Up A-Fear-Ances” gave us new insight into Eda and Lilith by introducing their mother, Gwendolyn. Believing in a traveling salesman who runs a pyramid scheme over believing in traditional medicine, Gwen represents the dangers of alternative medicine. Yes, she’s working out of a place of love, but she doesn’t trust her adult daughters to know what’s best for them. She’s the embodiment of the saying “The road to Hell is paved with good intentions.” Honestly, she reminded me so much of super religious people who believe they can pray mental health away. It’s another very timely episode of The Owl House as we continue into year two of a pandemic and anti-vaxxers.

Gwendolyn’s actions towards both her daughters harm them. Focusing on trying to heal Eda’s curse, she made Eda feel ashamed for being cursed in the first place. This is common with people who live with mental health issues, oftentimes with family not understanding their pain. But Gwen also favored her youngest daughter which in turn led to Lilith being ignored. It was actually Lilith the entire time that needed her mother the most, but Gwen doted on Eda instead. Lilith was always self-sufficient, but that didn’t mean she didn’t need her mom. Gwen ended up pushing away both of her children. Which made it quite fitting that when Lilith and Eda turned into their Owl Beast forms, Lilith attacked her sister. She lost control, releasing the years of pain her mother caused on the wrong person. 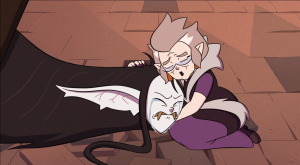 In the climax of “Keeping Up A-Fear-Ances” after she realized her mistakes, Gwendolyn’s apology to her daughters was such a beautiful moment. It helped Eda find her strength, once again taking hold of her curse and controlling it. But it’s the scene of Lilith sobbing in her Owl Beast form, her head in her mother’s lap that breaks my heart. Lilith was finally seen by her mother, something she wanted her entire life. I wish it was that easy to make people understand the pain of mental health. You can’t just make it better. You can’t just apologize away years of trauma caused by family members, friends, religious institutions, and so on in twenty-two minutes. But this is why series like The Owl House are important. They lay the groundwork for those conversations to have a launching point.

We have to hit the two big bombshells at the end of “Keeping Up A-Fear-Ances” because OH MAN! 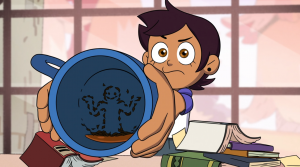 First is the reveal that Luz isn’t the only human to have lived in Bonesborough. Gwen explains there is a substance called Titan’s Blood that can cause leaks between the realms which a human, specifically a male one, came through a few generations prior to the series. I think this is going to tie into the cold opening of the episode which showed how Eda accidentally got her portal door. She found herself in a new place when she tripped on the door in the woods. It has to be where the human once lived or else it’s a heck of a coincidence being in the same episode as this reveal.

I’m calling it now: the prior human has to be Emperor Belos or relates to him in some way. Either he’s extended his life or he is a descendant of that original human who came to the world before Luz. I would be really shocked if this all doesn’t tie back to him at all. 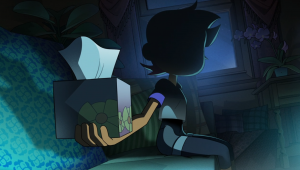 The second bombshell wrecked me. There is another Luz with Camila in the human world! It’s in Luz’s house with her mother! The fandom has named her Creepy Luz! Dear reader, I SCREAMED when I saw her. I’m so scared for Camila living with whoever and whatever this person is. We knew from season one that someone had been forging letters to Camilla so she thought her daughter was safe. But to see a person that’s not our hero in the same home as Camila shook me.

It’s also the one point in the story that I have no idea what to make of it. Everything else I can tie back into the narrative, the characters and their journey, or the villains. I have no flipping idea who or what Creepy Luz is. That’s so incredibly exciting for me as a viewer. It raises the stakes so high! Anything can happen!

Some random thoughts to round out Keeping Up A-Fear-Ances: 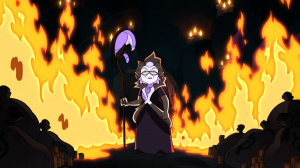 -Gwendolyn controlling the Fire Bees to run off the pyramid scheme guy was an amazing moment! It really showcased the power a parent can have when someone is trying to harm their child.

-Lilith experiencing her body parts falling off for comedic effect as a side effect of the curse is a great bit! Though I can’t help but to wonder how young Eda handled that for the first time! She was probably so scared!

-When Lilith mentioned their father, what was that little upset look Eda gave? Does she have a bad relationship with her dad? I hope we get to see that drama!

-Hooty being depressed because Lilith is gone could be a potentially bad thing. He’s the defense of the house. If he’s sad, it might make it easier for people to invade them. 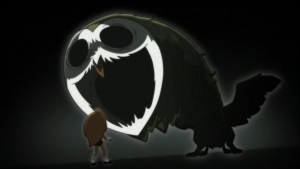 -King and Lilith getting drunk off of ice cream is peak Disney nonsense.

-Gwendolyn saying she was going to have some choice words for that darn Emperor is the best line of the episode.

-I continue to love the horror elements getting slightly more amped up this episode. The internal Owl Beast in Eda and Lilith’s minds is so creepy and always beautifully animated.

-Eda’s morning routine is so much like my own. I love her! Also, every time she calls herself “Mama,” it gives me life!

“Keeping Up A-Fear-Ances” gave us so much in its short runtime. We got more of Eda and Lilith’s backstory, new mysteries have dropped, and Creepy Luz is in the human world. The Owl House continues to bring it each week, and I can’t wait for the next.