Kaz, Rucklin, and the Importance of Kindness in Resistance 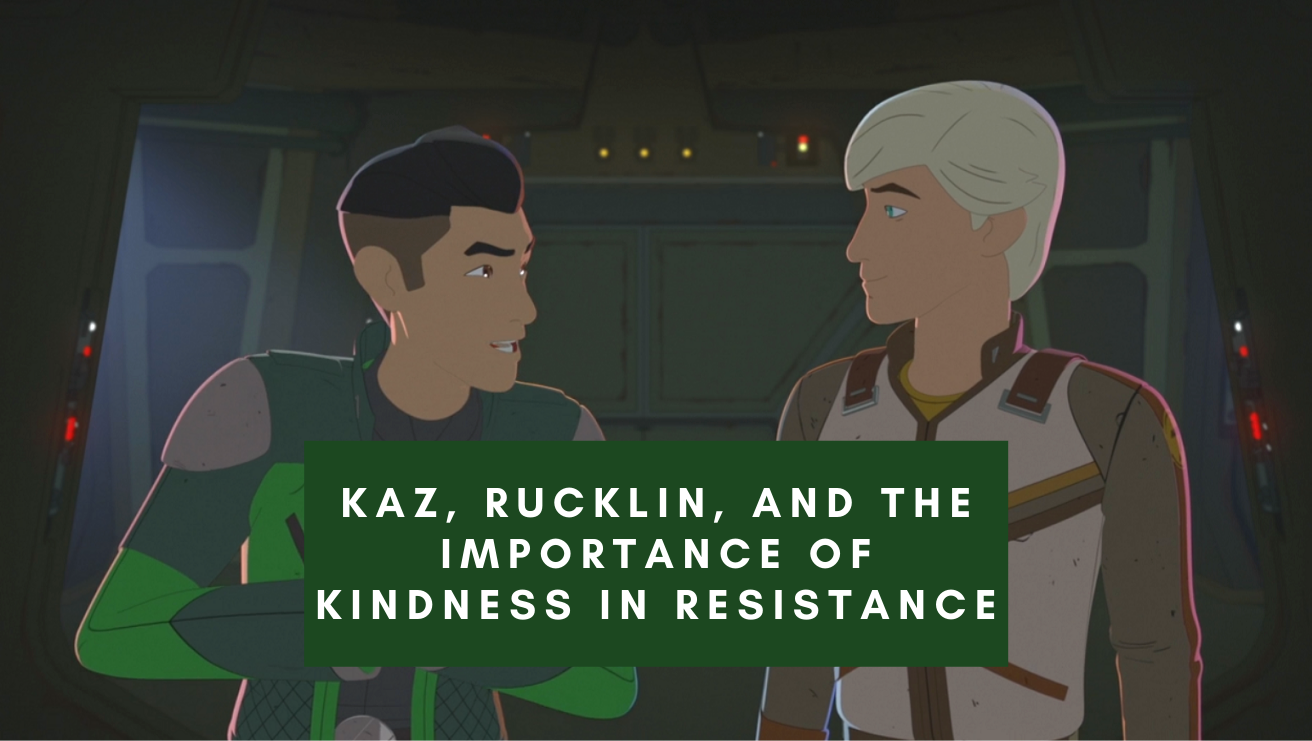 One of the most interesting stories in Star Wars Resistance is the dynamic between Kazuda Xiono and Jace Rucklin. As narrative foils to one another, their stories run parallel for most of the show. While they both start on the Colossus, Kaz and Rucklin eventually find themselves on opposite sides of the war.

What’s always fascinated me about these two is how similar they are at the start of Star Wars Resistance. The two of them have many shared character traits. With a few simple choices, Kaz could have easily become Rucklin and vice versa. The only thing that separates the two and drives their actions are their core moral values:

Kaz’s kindness defines who he is while Rucklin is an opportunist. 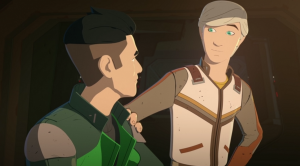 For the first few episodes, Kaz is a bit self-centered. He joins the Resistance almost like it’s a social club with all his personal heroes like Poe and Leia. He doesn’t seem to grasp what his actual job is. It’s an adjustment for him to have to check his privilege. Coming from a rich upper-class family, he honestly has no idea how to budget money or work hard labor outside of piloting.

Yeager spends most of episode one trying to get Kaz to take responsibility for his race against Torra. Kaz got himself into the mess. He has to face her because actions have consequences. That’s the first real lesson Kaz learns.

Still, Kaz continues early in the first season to find easy ways around his problems. In “The Triple Dark,” he doesn’t understand why it’s important for him to be a mechanic. He only wants to be this great spy for his own gain. So, he manipulates Neeku to get out of work, and, frankly, it’s a very jerk move from our protagonist. He constantly lies to Tam, which of course has dire consequences later in the show. It’s not until about “The High Tower” that Kaz starts to realize being a mechanic is part of being a spy.

Jace Rucklin is similar in a lot of ways to Kaz. In his first episode “Fuel for the Fire,” we see how conniving Rucklin is. Like Kaz, he’s incredibly self-centered even more so than our hero. He doesn’t like putting in hard work, choosing instead to backstab and cheat his way up the ranks. Like Kaz does to Neeku, he manipulates Kazuda to get to Yeager’s hyperfuel. Rucklin holds himself like he’s from the upper-class, despite us not knowing his background. He doesn’t want to be some lowly person on the Colossus. Like Kaz, he wants to be an Ace Pilot. 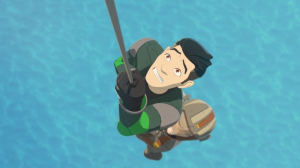 In “Fuel for the Fire,” we start seeing their differences play out. Despite Rucklin tricking him, Kaz can’t bring himself to let Rucklin die from his own recklessness. He risks his life to pull Rucklin out of his ship before it explodes. Rucklin refuses to accept responsibility for his own actions. He blames Kaz for destroying his ship, never thanking him for saving his life. Here, we see that Kaz took Yeager’s first lesson to heart. Kaz calls him out on it because actions have consequences. After this, Kaz becomes more aware of how his actions can affect others. From here, we see where their paths divide.

Over the course of the first season, Rucklin struggles. While bussing tables for the Aces, he actually has a good opportunity to get his foot in the door. Not everyone on the Colossus has access to Doza Tower. If Rucklin had put in the hard work and effort, he might have gotten the chance he wanted to be an Ace. Instead, he sees an opportunity to get his fabricated revenge on Kaz. Choosing to cheat ruins his best chance.

Rucklin is quite delusional too. It’s always everyone else’s fault and never his own. There’s a reason that everyone warns Kaz to stay away from Rucklin in “Fuel for the Fire.” It’s because Rucklin burned his own bridges with his own gasoline and matches. Then, he turned his finger on the Colossus and blamed them for the blaze. 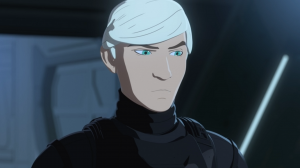 Kaz is a threatening presence for Rucklin. People are immediately drawn to Kazuda. Torra befriends him in episode one and brings Kaz up to the tower where Rucklin works. Aunt Z, Orka, Flix, and other residents might give Kaz a hard time, but they understand what makes him tick. At Kaz’s moral center, he is a genuinely kind person.

Kaz learns so much from his mistakes that I would argue he has one of the biggest character growths in any animated Star Wars series. His selfish rich boy ways are quickly dropped as he takes responsibility for his actions. Especially in season two, Kaz solely blames himself for Tam joining the First Order. He learns to love the Colossus and the people who call it their home. Through befriending people, being kind, and caring for their wellbeing, Kaz achieves Rucklin’s dream of becoming an Ace Pilot. He put in the hard work and effort to do so.

This all comes to a head in the season two episode “Station to Station.” A problem on the Colossus is threatening everyone’s lives. Kaz and Neeku must sneak on a similar First Order vessel, the Titan, to steal the part to save them. 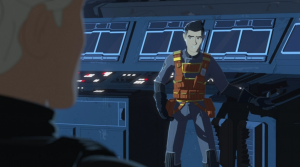 Here they run into Rucklin, now part of the First Order. What’s interesting about Rucklin in this episode is it opens with him griping. The grass is not greener on the First Order side. In a place where his cheating and cutthroat attitude should lead to success, Rucklin is frankly upset that no one is kissing his ass. He got by on the Colossus on the backs of other people. He can’t do that here. The First Order actually makes him work, something that seems to be very foreign to him. He hates it. He sees an opportunity by catching Kaz and Neeku.

On the verge of Rucklin turning the intruders in, Kazuda pleads to Jace’s humanity. He explains that everyone on the Colossus will die if they don’t get this one part. Kaz isn’t there to fight. He isn’t there to sabotage the First Order. He only wishes to save people’s lives.

Rucklin coldly responds, “Well that’s what you get for choosing the wrong side, Kaz.” 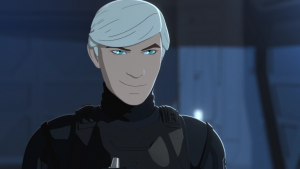 It’s Rucklin’s moment crossing the point of no return. He was given the choice to save his old home. He was given a chance at kindness. Instead, he can only see Kaz and Neeku’s capture as a means to his own promotion to go up in the rank. Rucklin holds an attitude towards the Colossus that screams, “Those people never did anything for me!” when it was actually the other way around.

People rally around Kaz. The Aces trust him as a leader because he earned it. He gained Synara’s friendship despite her being a pirate. He protects Kel and Eila from First Order soldiers on multiple occasions. In the finale, he’s willing to sacrifice his life for the Colossus. It’s the moment that the citizens choose to take up arms and fight for their freedom. Kaz proves time and time again what kind of hero he is. Sure, he started off rough and self-centered like Rucklin. 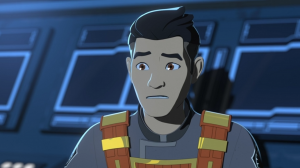 But Kaz chose kindness. He chose to grow as a person. Rucklin always searched for the easy way out. It’s why he never got anywhere on the Colossus. It’s why he failed in the First Order, losing Pyre and Tierny’s trust as they saw him for who he truly was. Rucklin’s desperation to cheat and lie led to his own demise. He learned the hard way Kaz’s very first lesson. Rucklin’s actions had consequences.

Kaz and Rucklin’s story is one of my favorite parts of Star Wars Resistance. I often wonder what would have happened if Rucklin had opened up more to kindness. Maybe not get fully redeemed, but at least having those moments where a bad person did a good thing. Maybe he would have been a bit more like Kaz in the end. Maybe he would have survived. But in the end, Rucklin proved one of the big morals of the show:

Kindness and hard work are always the best choices.