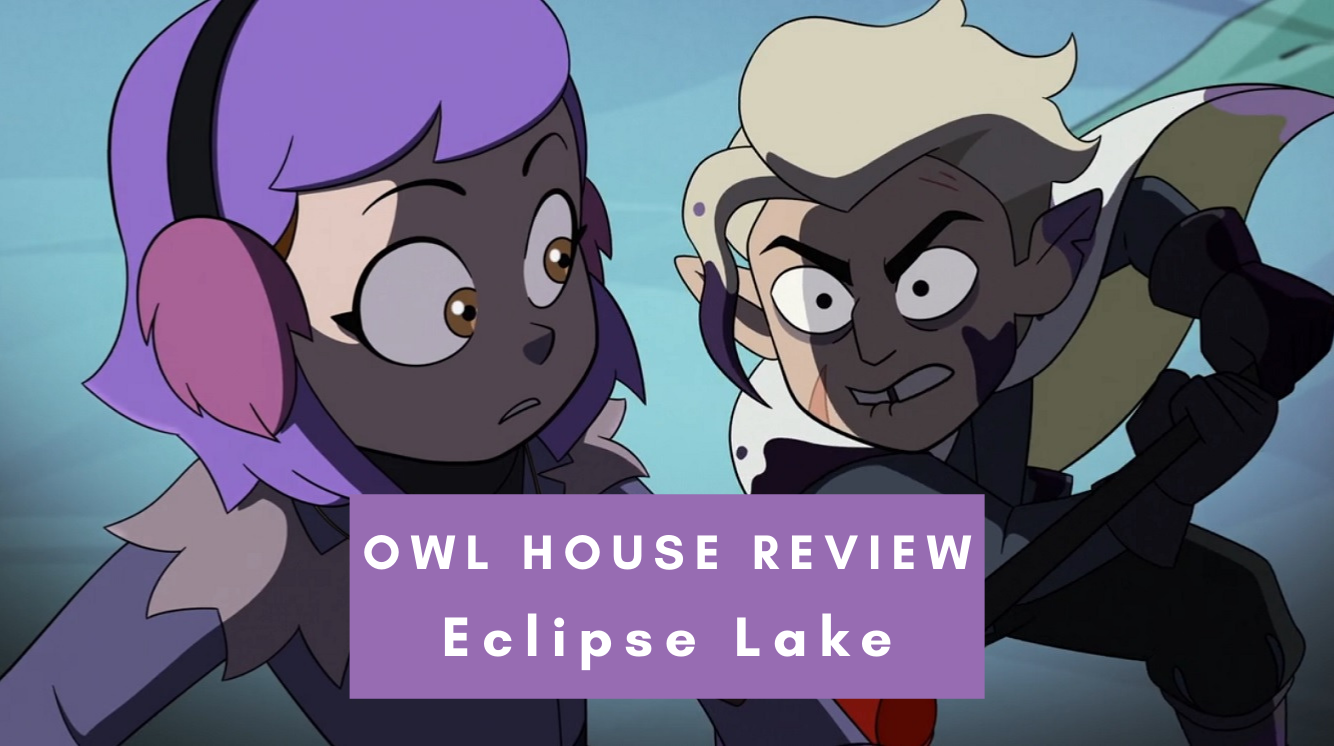 I’m starting to repeat my praises for season two of The Owl House, because “Eclipse Lake” was another stellar episode.

These cold openings are A LOT this season, almost every single one has offered up lore-changing reveals. “Eclipse Lake” is no exception. One of the first things we see is an open book that Emperor Belos is using. The left page has a person with red eyes, and the right page has instructions on how to make something called a Grimwalker. 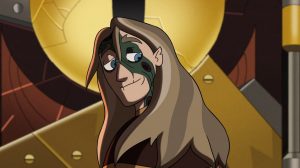 I googled ‘what is a Grimwalker,’ because I had never heard of this kind of creature before. This show uses mystical creatures like the kikimora and selkies as the base for their characters and animals. But the only thing I could find about Grimwalkers was from World of Warcraft with a character having that last name. My knowledge of WoW is very limited outside of my friends playing it. But after a bit of digging, I found that the Grimwalker character is a species called a Tauren. They’re bipedal cow creatures with huge horns. And Belos, as we have seen, has horns in his mud form.

This is a very long way of saying that I think someone on The Owl House crew is probably a World of Warcraft fan. If these creators have thrown in Dragonball and Neon Genesis Evangelion references before, I don’t think these amazing nerds would shy away from a World of Warcraft Easter egg. But outside of that, I couldn’t find anything in media or literature called a Grimwalker. It makes me excited that this crew is creating their own lore for the series.

The left page of Belos’ book had an image of a person with red eyes. This looks so similar to Hunter’s mural from the ending credits. Both of these together could indicate that Hunter is the Grimwalker or an ingredient in making one. There are other ingredients too from creatures who have appeared earlier in the season like the scales from a Selkidomus. I have seen floating around from other creators the theory that Hunter is a clone of Belos. I’m not a fan of this theory, but it’s definitely still on the table. It’s such a prominent theory in the community that I must mention it. Whatever it is, Hunter has a big role to play soon.

By the way, I’m not kidding about the cold openings giving us a lot. Everything I just explained is all in the first FIVE SECONDS of “Eclipse Lake.” 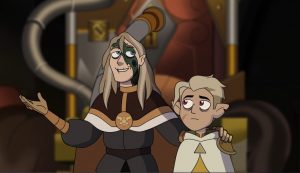 We also finally see Emperor Belos’ face! It’s really not what I was expecting it to be. He actually comes off as a kindly old man as he flashes gentle smiles to Hunter. Belos spins a whimsical tale about the human realm to his (supposed) nephew (I still am not convinced they’re related). He fills Hunter’s head with delusions of grandeur, telling the teen that he’s special and the Titan has big plans for him. This softer demeanor shows a real glimpse of how Belos held power over Hunter for so long.

There is still an underlying coldness to Belos as he speaks. Hunter and Belos have a real carrot and stick relationship here. Hunter is rewarded with knowledge of the human realm, something he clearly craves. But because of his failure in “Hunting Palismen,” he’s been sidelined with Kikimora taking his mission to the Titan’s Knee. These expectations translate into Hunter’s self-worth. He believes if he can’t be useful, then he is a worthless person. Belos enforces this by using dialogue like, “It would be a hassle to find your replacement, Hunter” and Hunter is only “useful if he is safe.” Belos’ words are very passive-aggressive despite his soft voice. It’s really great voice acting from Matthew Rhys. This becomes the driving force of the episode for Hunter. 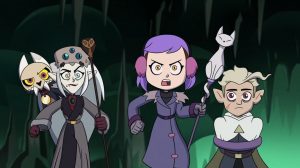 “Eclipse Lake” continued the fracturing of Belos’ people from the inside out. When there is a system of only the strongest and cruelest survive, in-fighting is very common. The cracks are showing. Kikimora is becoming increasingly unhinged and fully paranoid in her drive to best Hunter. Lilith is out of her way. Hunter is supposed to be sidelined. It is her time to shine and take advantage of this opportunity. Which Belos is fine with as he tells Hunter that he enjoys Kiki’s little plans. But also this mentally is breaking her down as she’s willing to do anything to succeed. Kiki doesn’t care about the health of her soldiers either as they mine for Titan’s Blood. She only wants to win.

What’s actually telling is the female captain under Kiki. She is completely loyal to her boss, ready to fight for Kiki’s honor and even tries to murder Amity to help her leader win. Whether it’s loyalty or fear, Kikimora does have some weight to throw behind her machinations. 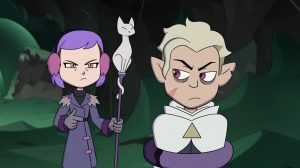 Amity and Hunter end up being a fascinating team-up. They both come from the same social structure where results determine a person’s worth. Amity has spent the last season and a half breaking free from this mentality and getting out from under her parent’s thumb. That doesn’t mean that she’s not going to backslide though.

Now that she’s officially Luz’s girlfriend, Amity falls back on the only teaching she knows where results matter. She thinks being the best girlfriend is the same as the top student. If she doesn’t have that validation from Luz, she feels like a failure. It just so happens that Luz is horribly sick this week with the common mold (which results in a great fungus gag). Amity takes it upon herself to prove that she’s the best despite miscommunications between her and Luz.

This is why it’s so easy for Hunter to manipulate Amity. He understands that mentality and can needle his way into her thoughts. Amity doubts her ability to be the best girlfriend as they continue to run into more and more mishaps. But Hunter becomes more desperate as well as his own mission threatens to fall apart. 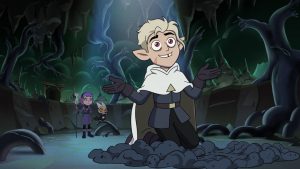 Hunter really shows how far Amity has come. Watching him in “Eclipse Lake” is like looking through a portal back into Amity’s first episode. She lost it trying to prove her worth to Principal Bump. Now as Hunter literally digs his own grave and dramatically falls into it, his mindset is he can’t go home. He has no one. Amity recognizes this because she used to feel that way. The stress of expectations is very real to both of them. Her speech is so powerful as she urges him to find people who love him regardless of his results. She shows why she’s the most developed character in the series.

It makes him a perfect foil for Amity and where their differences lie. Amity’s already taken Hunter’s journey. She knows what it’s like to break away and be with people who love her regardless of status. She doesn’t have to prove her existence to anyone. There are people who love her despite her family name. Hunter, on the other hand, has to go home to a tyrant who only wants to use him. He hasn’t had the time to find those people despite Luz starting his journey a few episodes ago (more on Luz in a second). 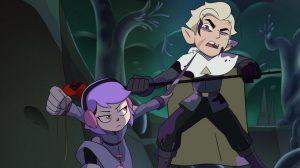 Sadly, Hunter sees the prize he seeks around Amity’s neck: the key to Eda’s portal door. Just when he seems like he might make the turn towards good, he slides back into his old ways. I actually love that moment. My only criticism for “Hunting Palismen” was I felt Hunter’s turn was a bit too fast since he had only been in the show for a couple of episodes. I love this backslide in “Eclipse Lake,” because it allows him more room to grow.

It also gave us another stellar fight scene from this crew as Amity faces off against Hunter for the Portal Key. From Lilith and Eda’s multiple brawls to Luz battling Belos and now Amity vs Hunter, I always look forward to these amazing spectacles. Amity with her new palisman staff is a powerhouse magic user facing off against Belos’ best. She’s a force to be reckoned with battling for Luz’s future. Hunter breaks apart, becoming more and more desperate. Though, it’s fun to see him learning to use his new cardinal palisman. He always had artificial magic and he quickly finds out that wild magic doesn’t work the same. 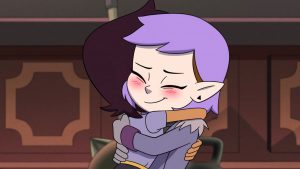 Thanks to Amity’s quick thinking, she breaks the Portal Key which holds the Titan’s Blood that both sides need. Hunter has the key now, but who knows if it will work. Amity’s glove is stained with Titan’s Blood, but it might not be enough to help Luz. Neither side fully won the fight.

None of that matters to Luz. She’s happy her amazing girlfriend returned safely to her. “Eclipse Lake” showcased Luz’s importance to the series despite her being sidelined and sick for most of it. Luz trusts everyone so openly even to a fault. She was the catalyst for Eda and Amity’s character journeys. She started to break through to Hunter. In “Eclipse Lake” however, she’s not there. Eda and Amity have no reason to trust Hunter and vice versa. It leads to them being pitted against each other in a race to find the Titan’s Blood. I really do believe if Luz was there, this would be a very different episode.

One side note in the B-Plot, I love that Eda can’t be Harpy Eda on command. She has to keep working with the Owl Beast. Harpy Eda is not a magical fix after last week’s emotional episode. Eda will always have work to do on herself. It leads to her making a deal with the creature inside of her. What all the deal with the Owl Beast entails, we’re not sure. It’s played off as a joke that she had to eat some rodents to satisfy the Beast, but there has to be more to it than that.

Some random thoughts to round out Eclipse Lake: 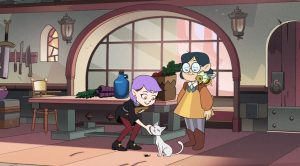 -Amity has a white cat palisman named Ghost and I love this kitty!

-WE FINALLY SEE OWLBERT! I’ve really missed our little owl buddy! I’m so happy he’s back! And the quick little image of him riding on Ghost’s head was ADORABLE!

-Eda taking advice from human workout videos AKA Dragonball Z might just be the best joke this series has ever written.

-Love the ongoing joke that Eda still calls Gus by the name “Goops.”

-Hunter being so sad that everyone thinks his voice is annoying is cute! 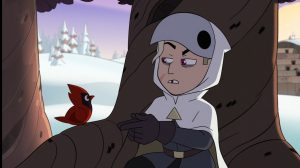 -Hunter and his cardinal palisman ARE SO FREAKING PRECIOUS! I love his whole energy of, “I don’t want you in my life, but stay here because I’m going to bounce my ideas off of you.” I love that bit of growth too where he finally starts to trust his palisman and can understand it. I can’t wait to find out the cardinal’s name!

-Amity’s fighting style by keeping Abomination goo in a flask and whipping it out when needed is very similar to Katara from Avatar: The Last Airbender. This had to be on purpose since Mae Whitman is the voice actress for both Amity and Katara.

The second season of The Owl House has been solid. I can’t help screaming at the top of my lungs how good this show is to anyone who will listen! The character work, plot, and lore continue to be some of the best on television. With what looks to be the midseason finale next week, we’re on the verge of something huge coming. I can’t wait for it!