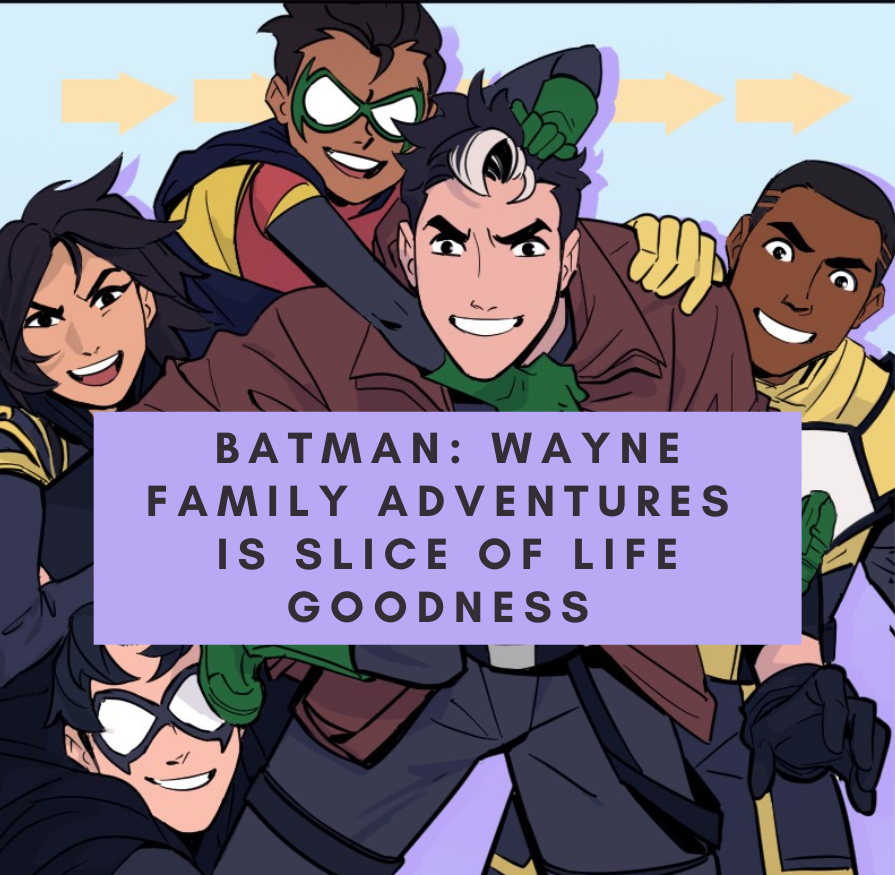 Batman: Wayne Family Adventures is a new series from a collaboration between Webtoon and DC Comics. Starring Bruce Wayne as Tired Dad ™, it’s a slice of life comic with the entire Bat Family or BatFam for short.

And boy is this comic something I’ve waited years for! Batman: Wayne Family Adventures is so freaking pure and wholesome. It starts off with Duke Thomas, the Signal and Gotham’s newest vigilante, moving into Wayne Manor to officially join the Bat Family. From there, the series explores their daily lives. 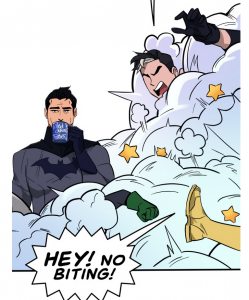 This series is right up my alley. I’ve always loved slice of life stories, especially with superheroes. It’s one of my favorite genres. The big, climactic comic book battles are fun, but there’s something special about these smaller, personal stories. It’s these moments that let us get to know the characters best. They’re not just their super personas; they’re people living their lives doing an extreme job. And Batman: Wayne Family Adventures doesn’t disappoint. Whether it’s the BatFam fighting over the last cookie or Barbara having lunch with her father, they’re simple tales showcasing why these characters are so lovable.

This series is so nostalgic for me too. I used to manage a comic book store. Every week, my co-workers and I would discuss the newest books and our favorite storylines. But the ones we always came back to over and over were the everyday life moments with characters. One particular favorite was from Tom King’s run of Batman where Bruce took his boys to a local Batman themed burger place. He then proceeded to eat a hamburger with a knife and fork. We lost our minds for weeks in our little comic store. It became a constant joke we kept coming back to. If one of us ate a hamburger on our break, the rest of us would ask if they got a knife and fork with it too. 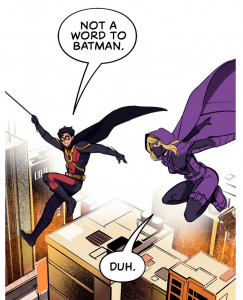 As I read Batman: Wayne Family Adventures, it pulled these memories out of me. I smiled over and over, missing that time in my life which I loved. In fact, one of the first things I did when this series premiered was text it to my old co-workers, and we all laughed all over again together in our group chat. We reconnected once more over this comic. That’s exactly what good art should do. It should make the reader have some kind of emotional reaction about the piece of media. I immediately fell in love with this series based on that alone.

Also to simply put it, it’s really fun! Sure, dark and gritty Batman stories are great. But after such a hard few years in our real world, it’s so nice to have a Batman story that’s lighthearted. Each panel is full of life. Whether it’s Damien messing with Duke, Bruce drinking from his “World Okayest Father” coffee mug, or Jason stealing items from the Bat-Hideouts simply because he can, this comic is so energetic. I was constantly laughing, especially in episode two with the BatFam battle for the last cookie.

Jason nearly murdering Damien over those chocolate chips made me spit my coffee right back into my cup.

Also, someone please tell Bruce to take a nap. Poor guy is always so tired. 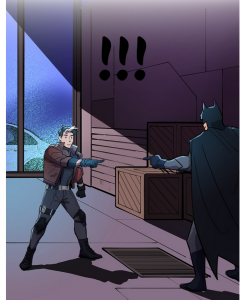 I also want to say that it is smart to put this series on Webtoon. The online service is free meaning there is no paywall to enjoy this comic. If you want to read ahead, you can purchase a fast pass to do so. This brilliant business model has led to a lot of successful series getting published like one of my personal favorites Lore Olympus. For someone like me who is often strapped for cash, I love being able to enjoy some BatFam goodness so easily. And like Lore Olympus, I can see this series being published into trade paperback at a later date.

If I had any concerns about Batman: Wayne Family Adventures, I’m wondering how long this format will hold up. So far, each chapter has been one standalone story. I’d be interested to see multiweek arcs play out. And while I enjoy the fun elements, I wouldn’t mind if the comic dove into more emotional beats. For example, Duke moves into Wayne Manor because his parents have passed away. There’s a lot of potential for him and Bruce as well as other Robins like Dick Grayson to bond and connect. I want to see this found family really explored. 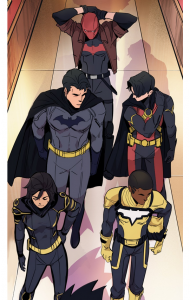 The other thing I would love to see is the addition of Selina Kyle AKA Catwoman. I’m interested to see if Batman: Wayne Family Adventures plays with Bruce and Selina being (unofficially) married. I particularly want to see Selina interact with Damien more. Damien is Bruce’s son and Selina is his partner. She will never be a replacement for Damien’s mom, but there should be some kind of respectful relationship between the two. And not just with Damien, but also with everyone in the BatFam. Selina is important to Bruce. So are all of his (unofficially) adopted kids. If Batman: Wayne Family Adventures is going to explore the depths of the BatFam, Selina needs to be part of this narrative too.

I wouldn’t mind seeing Jon Kent show up from time to time to hang out with Damien as well. But I’m also a bit of a fan of Super Sons so that’s more of a personal indulgence for me.

Batman: Wayne Family Adventures is what I’ve wanted for so long out of Batman comics. There is a reason issues like Bruce, Selina, Clark Kent, and Lois Lane going on a double date are often fan-favorite issues. We get a look into the people behind the masks to explore new scenarios. Everyday life can be just as much of an adventure as a super one. I’m excited to see this series explore that concept more through a very super lens.