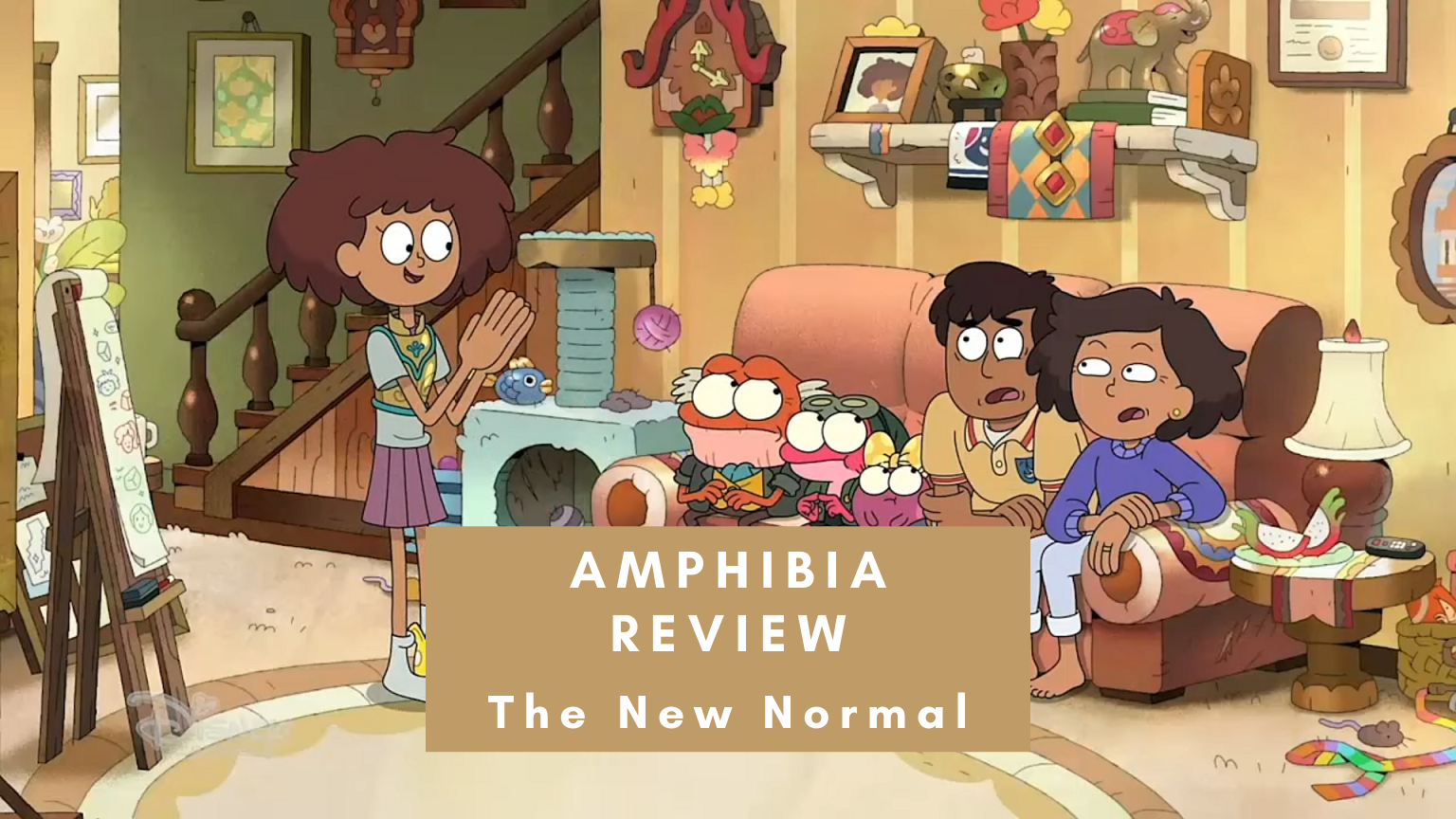 Amphibia is back with its season three opener “The New Normal.” Anne and the Plantars are now in the real world and teaming up with Anne’s family for this next part of the adventure!

It’s hard to believe that Amphibia’s second season ended almost six months ago. With everything happening in the world, it feels like a decade has passed. Amphibia has definitely become such a comfort show the last two years bringing me so much joy when I needed it most. With all the drama that happened around “True Colors,” it was great to see “The New Normal” kick off with a smooth and successful bang. I’m pretty sure the fandom would have rioted if Disney pulled the same crap twice.

Let’s get into the episode. 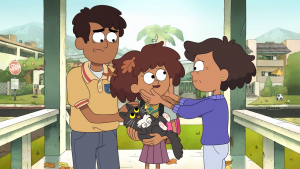 I’m glad they addressed right away how much time has passed. That was a question I had coming out of season two (which I talked about on my friend Ally Andrew’s YouTube channel). That immediately defined not only “The New Normal” but the season as a whole. With Anne, Sasha, and Marcy away for almost six months, it frames the story going forward.

I chose to avoid all the preview clips for the opening episode except for Anne’s reunion with her parents. I eagerly watched that scene when it dropped a few months ago. The emotional resonance is so powerful as Mr. and Mrs. Boonchuy (voiced by Brian Sounalath and On Braly, series creator Matt Braly’s own mother) are finally reunited with their daughter.

Anne’s parents have every right to be overprotective of their daughter. The look on Mrs. Boonchuy’s face before Anne knocks on the door says it all. She’s a mother crushed by her daughter’s disappearance who is fighting to keep any shred of hope alive. Seeing her daughter, Mrs. Boonchuy clutches Anne with such ferocity that you can feel the grief melting away. Anne’s father’s voice breaking got me right in the heart. With Brenda Song punching the emotions home with her performance as Anne, the Boonchuy family reunion is easily one of the biggest highlights in Amphibia thus far. Brenda, On, and Brian all brought their amazing talent and heart to that moment. It was the perfect opening.

The passage of time makes me incredibly excited to see Marcy and Sasha’s parents too. Marcy’s parents had broken the news they were moving, making Marcy run away. Then their daughter vanished for six months and is still missing. They must be crushed, which puts even more pressure on Anne which I will get to in a minute. 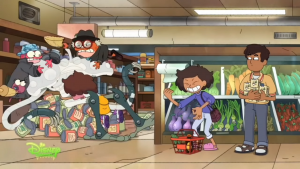 But I feel Braly and his team have been purposely coy about Sasha’s parents. The lack of hints and dialogue is very telling. For example, when Sasha is preparing to send Anne back to the real world, she specifically tells Anne to say hello to her [Anne’s] parents. Which seems odd. Why wouldn’t Sasha want Anne to let her [Sasha’s] family know she is safe? Sasha’s focus in season one was getting home, but I can’t recall her ever mentioning her family. Her focus was on saving Anne and Marcy. It really makes Sasha’s relationship with Grime as a mentor and father figure stick out more. I theorize that Sasha doesn’t have the best home life.

And I have to wonder if given the choice, will Sasha choose to stay in Amphibia with Grime in the finale? This show really emphasizes found family, and I could see Sasha choosing Grime to fill that role in her life.

To get back into “The New Normal,” I adore Anne’s parents being part of the adventure now, and I’m excited to see what kind of role they play going forward. I’ll admit, I’m super biased. This is one of my favorite media tropes ever since the first season of Digimon as the parents of the DigiDestined got pulled into the battle for Earth and supported their hero children. It adds different kinds of stakes into Amphibia. We’ve watched Hop Pop start off as a simple farmer that changed into an adventurer for his kids. But Mr. and Mrs. Boonchuy are getting flung in headfirst. While they avoided most of the fighting in this episode, we know from the season three trailer they will see action eventually. Their journey alongside Anne will be just as important as the season unfolds. 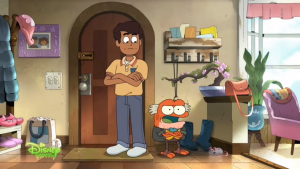 Mr. and Mrs. Boonchuy are also a fantastic litmus test to showcase how far Anne has really come since the first episode. They get to see how she matured while she was away. I think the most telling scene is when Anne’s dad locks her and the Plantars in the car before they go into the supermarket. He specifically calls out “you three,” more than likely indicating he’s used to addressing Anne, Marcy, and Sasha getting into trouble. But Anne has grown, showing over the course of the episode she’s not the troublemaker she once was especially when Sasha was around her. It’s such an important step moving forward with her parents learning to trust her more. As King Andrias begins to infiltrate the real world, the Boonchuys will have to rely on Anne the most.

Which is a ton of pressure for Anne to put on her shoulders. My girl is carrying so much right now. Not only protecting the Plantars in her world, but she has the weight of Amphibia on her shoulders too. “The New Normal” does a good job of bringing up those moments. Anne’s keeping some big secrets from her family. While the Plantars are there for support, secrets always come out eventually. It’s why I feel Sasha and Marcy’s parents could be a pivotal moment for Anne. They will be asking questions. They’re going to want to know where their kids are. Anne’s just a kid herself dealing with a lot. She left her two best friends behind with a crazy newt man bent on killing them all. Now, a new killer robot has shown up. It’s a lot. Anne’s either going to break down or rise to the occasion. 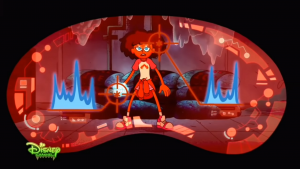 Or both! I could see Anne falter under this weight. But that’s what family is for. The Plantars and now her parents are her support. It gives Anne the ability to fall down if she needs to. She’ll have to admit when it’s hard and rely on those around her. It’s all great storytelling that I’m eager to see played out.

I’m also really concerned about Anne’s powers. She specifically says that using her powers feels “bad” which is a big red flag. Are these powers hurting her? Is this a situation where Anne could have absolute power but it’s corrupting her absolutely? I really doubt it is a situation where she’s feeling fear of the unknown right now. Anne knows herself better than anyone else. So if these abilities are scaring her, the audience should be concerned over her Calamity Powers.

Lastly, I am excited to see how being in the real world plays out. Being set on Earth changes how the drama is executed. What’s fun about the supermarket fight is our heroes have to be stealthy. They have to hide what’s happening. In Amphibia, Anne and the Plantars could just brawl without having to worry. Now, Anne is trying to protect her parents. She doesn’t want to expose the Plantars which could put them in danger. The setting itself changes the nature of the show, which the crew really utilized well in “The New Normal.”

Some random thoughts to round out The New Normal:

-I like the new Frog-Bot! I was under the impression the Frog-Bots would be like the monsters of the week. But this guy is sticking around, which makes me hope he gets his own little character arc like Frobo.

-The Quarantine Song is amazing! I laughed through the entire thing, because wow, that’s been our lives for the last two years. Though holy cow, it blew my mind that it was written before Covid! Is Matt Braly a wizard who can predict the future? Maybe he should pick my lotto numbers for me.

-The new closing sequence is very cute! I love how energetic it is compared to the closing credits of the first two seasons.

-Despite him being totally evil and the absolute WORST, I’m glad they kept some of Andrias’ goofiness. I adore loveable villains who can stab you a moment later. He’s really fun to watch.

“The New Normal” was a fantastic first episode of season three! Matt Braly said in a Reddit AMA that Amphibia was a three-act story. If this is the beginning of the end of the series, it’s been a wonderful ride. I’m so glad Amphibia is back and can’t wait to see where we go from here.